Seiko is marketing so many styles of the 7S26 divers that it's hard to keep track of all the variations. But the basic 200m diver that replaced the 7002s maintain a similar look and feel to classic divers in the 6105-6306-6309-7002 lineage. The most commonly seen are the following models:

There are many other variations of the 7S26 divers that are less frequently seen. Some are 200m divers like the classic models, others are "sports divers" rated to 100m. The following list is by no means exhaustive:

(Not listed here are the ladies and some mid-size divers.)

The current crop of Seiko divers all use the cal. 7S26 movement, which has 21J and runs at 21,600 bph. It's a non-hacking movment like most traditional Seiko calibers and has a quickset day/date calendar system. (For an in-depth technical analysis of the 7S26 movement, see John Turdling/ei8hthoms' review of the SKX779.)

Here are some of the differences among many of the popular variants:

The SKX007 and SKX173 are the standard models that are direct descendants of the 6105-6306-6309-7002 line of divers. The SKX007 is an Asian-market Seiko while the SKX173 is a N. American version. The SKX007 has round markers while the SKX173 has rectangular markers. The SKX173 uses a second hand similar to the 7002 divers. The second hand has a luminous dot located toward the end of the sweeping portion. On the SKX007, the dot is located on the elongated "back end" and the sweeping portion is painted white and has no lume.

The SKX009 and SKX175 are identical to the SKX007 except they have blue-and-red bezels.

There has been extended discussion among Seiko diver collectors on the differences between SKX007J and SKX007K. The SKX007J has extra text on the dial that's not on the SKX007K -- "21 JEWELS" under "DIVER'S 200m" and in small lettering "Made in Japan" along bottom edge of dial below 6 o'clock. Some people have said the SKX007J is made in Japan and the SKX007K is made in Singapore and the Japan-made model seems to be better. Others argue there's no proof of the country of manufacture or of any difference in quality between the divers. Many people on the S&C Forum have concluded that there is only cosmetic but no real difference between the J and the K variations -- they are all great divers.

In answer to the question, "What are the differences between SKX007J and SKX007K?," Seiko Japan said: "The watch ref.#SKX007J and SKX007K are completely same watch model. The shipping route is slightly different. We are not able to inform you of the details" (email from Seiko Japan Service Group, 10/28/02).

The SKX011J is identical to the SKX007J except it has an orange dial. The bezel insert also lettering and markers in gold instead of the customary silver.

The SKXA35 is identical to the SKX173 except it has a yellow dial.

The SKX779 and SKX781 are new designs that depart from the classic diver style. They have a thick scalloped bezel on a thick stainless steel case with pronounced curves. They also have a slight convex glass crystal. The dial and hands are radically different in style from the classic divers. Owners seem to all agree that the SKX779/781 cases are bombproof and the dial and hands glow like Chernobyl.

Except for the SKX779 and SKX781, the traditional-style divers all have similar if not identical cases. One small difference between the 7S26 divers and their predecessors is that the crown position on the 7S26 has moved to 3:45 o'clock instead of 4. All 200m divers have uni-directional locking bezels with 120-click graduations.

According to the Seiko Japan Service Group, here are the dates when the following models started production:

Here are some details about other variants of the 7S26 divers: 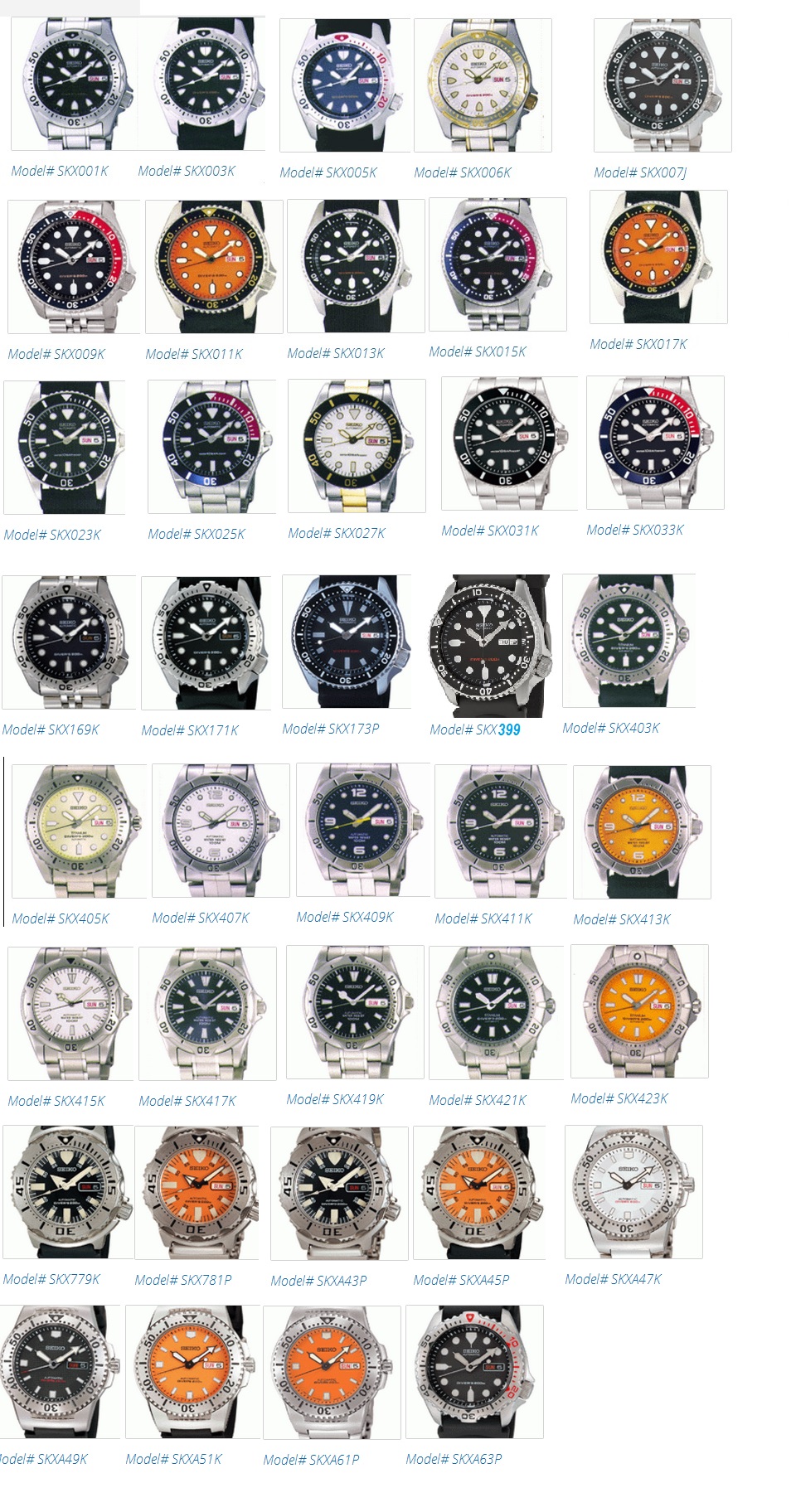 Man - this is the most informative thing ever. Seriously.
"Funny how things that start spontaneously end that way. Eat a peach." - Neil Young

Man - this is the most informative thing ever. Seriously.

So I'll start - I'd take the SKX023K.
"Funny how things that start spontaneously end that way. Eat a peach." - Neil Young

Good resource.
My best friend from college shared his secret to his huge financial success, "I fell out of the right vagina."