From movies to your mother-in-law, put it here and try not to hurt each other
Post Reply
24 posts • Page 1 of 1

I have many and will share more as days goes by.

- Fat chicks wearing leggings/yoga pants. Hello, it is not flattering and I might have just finished lunch.

- "Gunrange Commandos" with their $3000 "combat rifle", wearing all the latest "operator garb", can't maintain a 6" group at 100 yards and feel the need to walk down the line offering their superior marksmanship knowledge to everyone else.

- Following behind cars with visqueen/tape for windows. Fix the fucking thing or park it, you can't see out of that piece of shit.

- Four door cars with huge wings installed...... nice family car pal, you got a baby seat in that thing?

- Autos at stop lights with bass/music that shake my fucking windows. Nice hearing loss Coz, turn that shit down and thank me later.

- Dyed in the wool Chevrolet drag racers whom hate everything Fords/Ford Engineering........only to see a nice Ford 9" rearend installed on their Bowtie.

- Vintage Ford rods with small block chevs installed....... FFS, put a Chrysler in your Mopar, a GM in your GM and a Ford in your Ford. Jesus fucking christ!

- Members that feel the need to double space bullet points, use a ton of periods (............), parenthesize everything and use quotation marks like there is no tomorrow.

- People whom feels the need to let everyone know what their pet peeves are and who promises to share even more.

- Members who solicits other members to contribute to their forum posts.

How about you fellow Lords? Please participate with your list of pet peeves.
.

shitty watches made for tv

folks from Cali who come to Oregon and brag about how much they sold thier shitty $100K house for.

Pirus and the left hand lane drivers. Get the fuck out of my way or I will run your ass off the road with my gas guzzling, carbon neutral SUV

People who tell me what a Patriot is when they were too chickenshit to have served.

Corvette owners with garage queen vettes. (Fuck, drive the god damn hell out of it!)

People who don't prepare for the end of life

Willful ignorance
"I'll give you 5 bucks to spank me with a dead duck!"-Mike Rowe, Dirty Jobs

California transplants who like to say "Well, in California..(Fill in the blank)...."

Being asked for my email at retail stores

Tag Heuers (Since this is a watch forum)

Hmmm... My list of pet peeves? Should anyone ask me about it, I'd suggest being careful what ya wish for, I actually might write down that list.

Some time ago, I wrote my version of the Gilbert & Sullivan classic...
viewtopic.php?f=6&t=47404
...but I guess the real "little list" of mine is far longer than that.
The most merciful thing in the world, I think, is the inability of the human mind to correlate all its contents.
H.P. Lovecraft

I would just like to point out...….that my Very Important Post Count has just reached 30554.
My little brain can't even comprehend how deep that is.

Congrats on 30,554 posts John. Too many haters said you wouldn't make 30, 000. Take that bitches.
See you're WRONG I don't work at all, I'm a Democrat. The immortal Horse Feathers as spoken to Chucky Ninetoes.

We also need more critter pics, lollloLoollllloolllllololololol.
See you're WRONG I don't work at all, I'm a Democrat. The immortal Horse Feathers as spoken to Chucky Ninetoes.


I can zero out the post count if you all want.

Weed with seeds in it

movements called engines?
And what about the "wear in good health, bro"?
Anyways, of course I know what a pet is, so I thought this was another pet-thread. But peeves I did not know yet. So I would like to add:

(I was really wondering, of course there are lots of English words which I can not properly pronounce or translate - but only few that I don't recall ever to have seen or read before. I found out now, that "pet peeve" is a rather common term, so that is really my own fault of course. About the word peeve itself I learned:

The word “peeve” is a noun meaning something that irritates or annoys. It was back-formed from the adjective “peevish,” which means irritable or ill-tempered, around the beginning of the 20th Century. A “pet peeve” is something that is particularly or especially annoying to someone in a personal way.

Normally I would say "So many words, so little content" but I cant do that in your case John.
NRPI here.

Wife talking to me from another room and then I have to guess what she said!

Waiting in line behind some dumb ass for 20 minutes and then when they get to the front they're not ready!

Oh yeah, and if I ever get another pet I'm gonna name it Peeves

Germans or Poles whose English is better than mine.
My little brain can't even comprehend how deep that is.

Several of COD's and Koi's that I wish I had been first with.

And this little purple fucker: 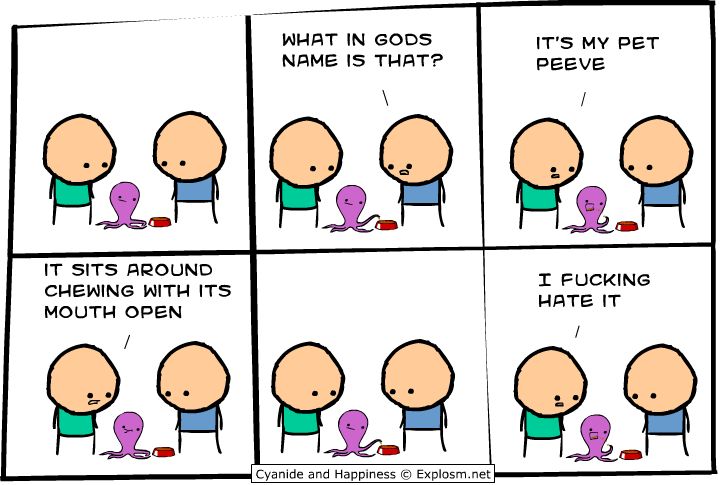 And the fact I'm still living rent free in his head makes me grin and giggle.
...bobbee

Cheaters.
WatchGeeks will go down in watch forum history as the worst watch related site that existed. Trolls, threats, bannings, and owners and sponsors talking out of their collective asses to fleece people out of hard earned money. - Koimaster

Would You mind to elaborate on that, please?

Would You mind to elaborate on that, please?

I would but "anything and everything else" is not to be overtly political. Suffice to say I gorged on hippy tears while one guy's overreach was undone but reached my fill when the new guys overreach exceeded the amount needed to correct the previous abuses and then stretched precedent. He operates independent of the "barrel law" - the law that states that anything you do will have to be endured when it's your turn in the barrel.

Still it was distressing to feel the ever so tasteful hippy tears turn to ashes in my mouth. I thought I could enjoy it much more than I did.
And the fact I'm still living rent free in his head makes me grin and giggle.
...bobbee

I quickly give a "thumbs down" and dump the YouTube channel when I hear this sophomoric pronunciation of the word.
.

People who think Carrot Top is funny.
My little brain can't even comprehend how deep that is.

DJ Khaled. What a classless dumbass that guy is.
"I'll give you 5 bucks to spank me with a dead duck!"-Mike Rowe, Dirty Jobs
Post Reply
24 posts • Page 1 of 1