For only the second time in Watchlords history, a dual review of the same watch! Below are T's words and pics


Well, here we go, it's dual review time about the Edox Les Vauberts Moon Phase, Model #80505-3-AIR. I have no idea what conj is going to say about this watch as I write these words, and I'm a bit nervous worryingg about what his prose will reveal – soon before he ordered the watch, I had given him some glowing words about it via PM. Right after that, his watch developed some sort of crown problem and he had to send his back to Ashford; I ordered mine at the same place and have had no problem with mine. Of course, I'm just hoping he enjoys his watch as much as I have mine, as for freakin' years here, I've practically called Edox a sneaky way to enjoy a well-made Swiss watch for a fraction of the cost you'd expect to pay.

Edox is really a strange bird in the watch industry, at least to my way of thinking. I discovered them at the long-lamented Kenjo watch store in NYC, now closed the better part of three years (yet still exists with an office in the city that does who-knows-what). Several years ago, I spotted a Grand Ocean certified chronometer with an ETA 2892-A2 on Joma Deals (remember that?) for like one-eighth the price it was selling for at retail. When I received the Grand Ocean watch, I was beyond thrilled with it, and still am – from the styling to the case quality to the movement, I still considered this one of the best watches I own – and trust me, I own Rolex, two Omega, Eterna, Hamilton, and all the way down the line, and I choose my words wisely about that Edox watch – it's really a nice piece.

So what makes Edox such a “strange bird”? It's a Swiss brand that, to this moment, continues to hold almost zilch presence in the U.S. market. You can continually find watches from their current catalog selling on the gray sites at the same time that dealers on Chrono24 ask for pretty near full price for the same pieces (including the one conj and I are talking about here). About, what, three years ago, Edox started popping up – good lord – SlopPU, and there's Edox company president Christian Hotz sitting there trying not to have acid reflux on camera while dumping watches he hasn't been able to sell for a fraction of what they sell for in Europe, while on the same “network” that flogs shit like Invicta and Stuhrling Original. Haven't seen Edox on Slop once since those days, but the fact they ended up there at all seemed surreal.

As for me, I always looked at the lack of awareness of Edox as a streak of good luck. For this brand that few covet, I have been able to pick up a six-slot watch box of really good Edox watches for about 70 to 80 percent off their original selling prices, thanks to the gray market. I don't care about reselling or flipping or anyone else's sense of awareness – these are good watches being sold for unbelievably low prices. It's my own little scheme, and I make no apologies for it.

Cut to 2020, and while I still admire Edox, in more recent times I've found fewer models that have caught my eye (and the brand seems to have cheapened much of its product line, as now the quartz models seem to outnumber automatic ones). The Grand Ocean series seems to have lost a bit of luster, and none of the current models hold a candle to the one I always own. I picked up a Grand Ocean a couple years back, but it's more of a sports watch than a legit diver; it holds it own. So it kind of surprised me when I saw the (still being sold full-price) series of Les Vauberts Moon Phase watches – the styling just grabbed me, and so, this time, as I have a tendency to go, just waited. Checked out their website, then Chrono24, then WatchRecon, and finally, the gray sites. Ashford got the series in no time flat, and the prices just kept dropping, and when I ordered mine, this model, packing a SW200 (some sources claim it's a SW280, but I don't think it is) Selitta, the price had dropped to like $279 as I recalled. Sold.

Nuts and bolts: This watch has what the brand dubs a 26-jewel “Edox caliber 805” with a power reserve of 38 hours (seems about right) … Stainless steel case, sapphire crystal (another Ashford fuckup, as they described it as “sapphire-coated,” but its sapphire), no open case back ... 42mm … rated for 200 meters (the crown does not screw down) … and, of course, the moon phase complication, which I don't hardly give a rat's ass about. I simply set it correctly off a chart off the web, since I obviously wouldn't wear this one all the time.

When I ordered the watch, the Ashford website clearly showed this as having a black leather strap (thought the text, which I didn't read upon ordering, stated it would be brown). I'm not a big fan of brown straps, but I accepted it as is, as it's a nice, soft leather calfskin strap that didn't require any sort of break-in.

This series comes in a bunch of colors, and to be honest, I ordered this particular style because they were giving away a watch that has an MSRP of more than $1,200 for $279. Edox describes it as a “sunburst dial,” which … okay, all right, fine. Looks goldish to me. The dial really is spiffy, though; this thing just screams to be worn with a suit, a garment I still have to wear about four times a month. It's a simple design, but up close, it looks flawless. The movement is running as smooth as silk; no problems with the crown here.
So all in all, I like the way it looks, it runs fine, it's okay. Nothing spectacular, but it's just fine.

I'll leave it to others here to debate the quality of Edox overall and where it might stand in the watch world, but as for me – it's usually a great deal. I hope conj eventually enjoys his watch as much as I have mine. 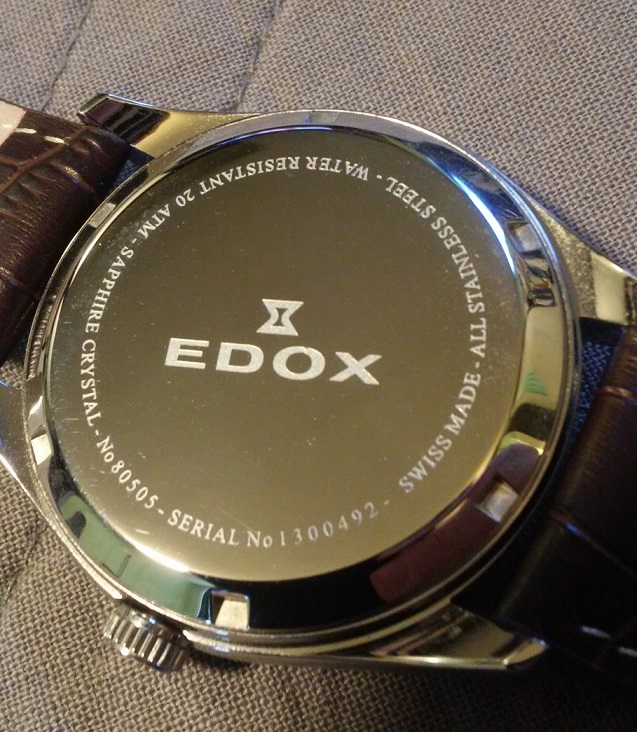 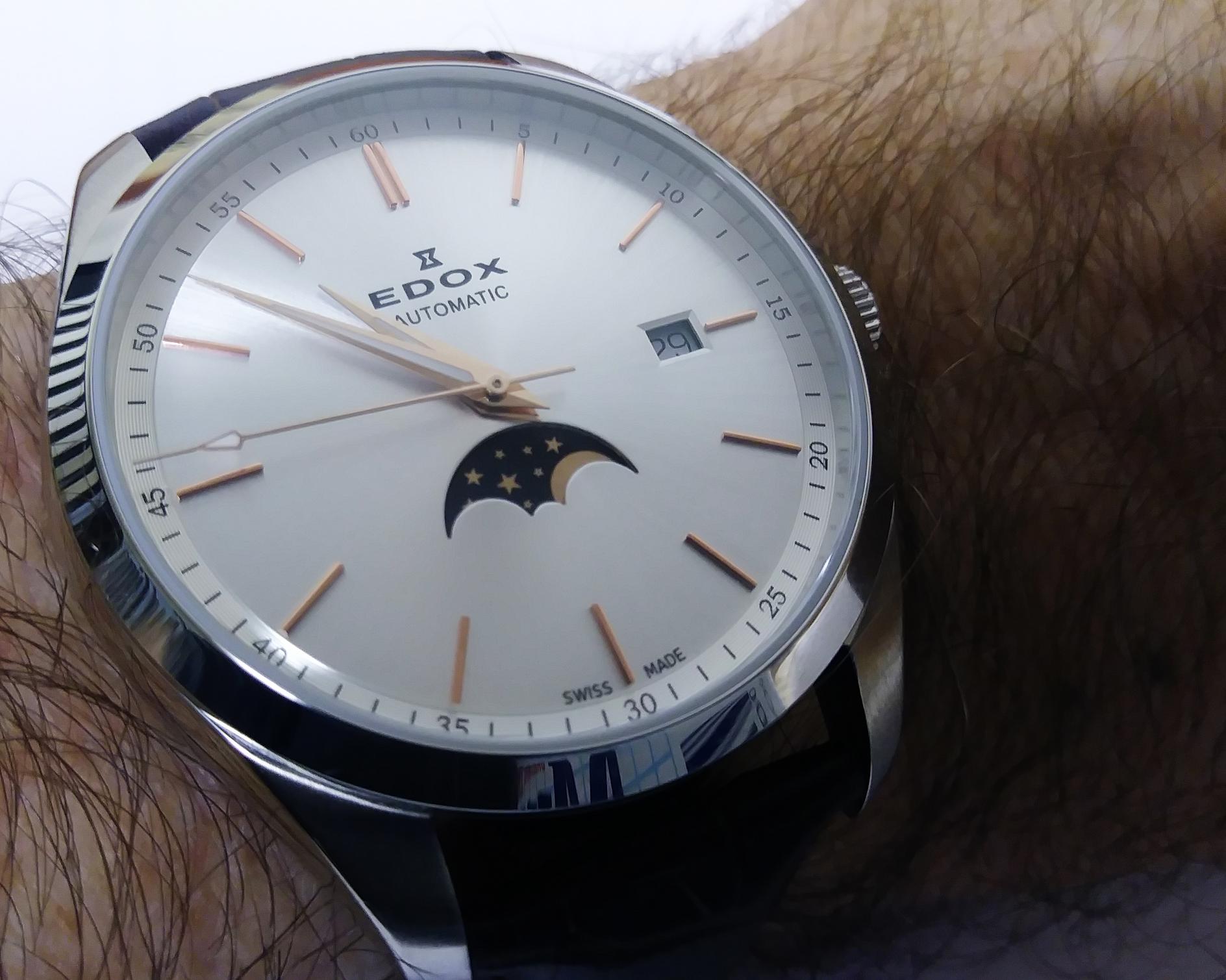 And here ends T's review; on to mine.

I had, for some reason, always wanted a moonphase watch. Why? Why do I want to punch Susan Boyle in the seat? Who the hell knows. Anyway, I noticed a few Glycines showing up at Ashford with the same simple design (and probably movement) as this Edox: 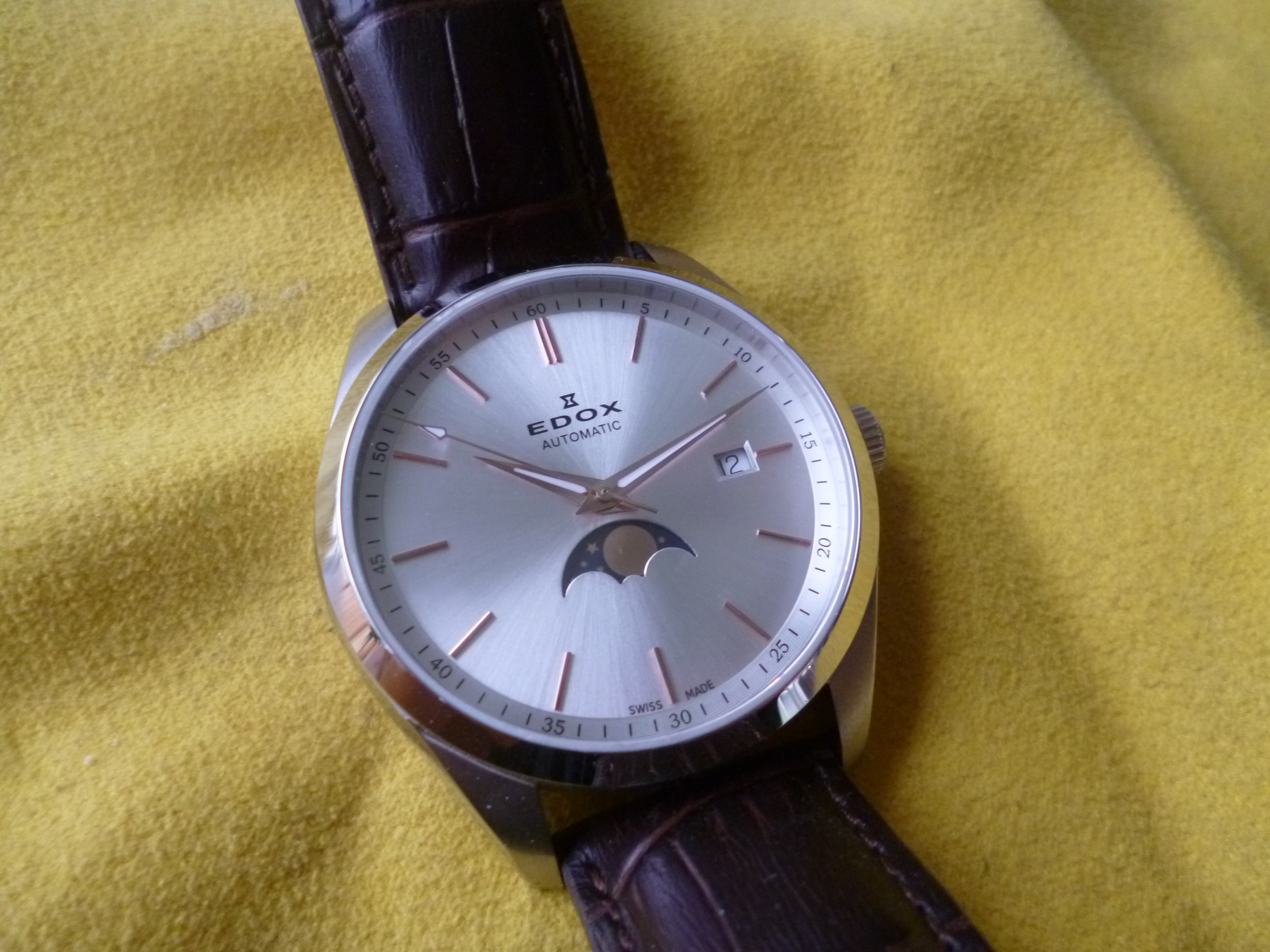 T has already delved into what the movement is--I've heard some stretchers at other forums, ranging from a newer caliber Sellita to a Sellita SW200 tractor with a DD module; checking online, it appears that Sellita does indeed make a three-hand with date/moonphase, called the SW280-1. I was sorely tempted to get one of the Glycines, as they offered a model sized at 36-37mm, but I simply can't bring myself to line Eyal's pocket, not even from gray market. So I opted for the Edox.

On to the specs: 42mm across, 44mm with crown, 11.5mm thick, 48mm lug to lug, 22mm lug width. The strap is brown leather that feels pretty supple, with a simple buckle signed for Edox. The case is nicely finished, with side polishing that looks really good, about what one would expect from a good Swiss or Japanese brand. The WR is stated as 200 meters, which is both surprising and slightly weird for what is, in all other aspects, a dress watch; as T states above, the crown doesn't screw down. I'd suspect that Edox uses the same case for a sports watch in their lineup.

The glass is sapphire, as one would expect, but the real story of this watch is the dial: 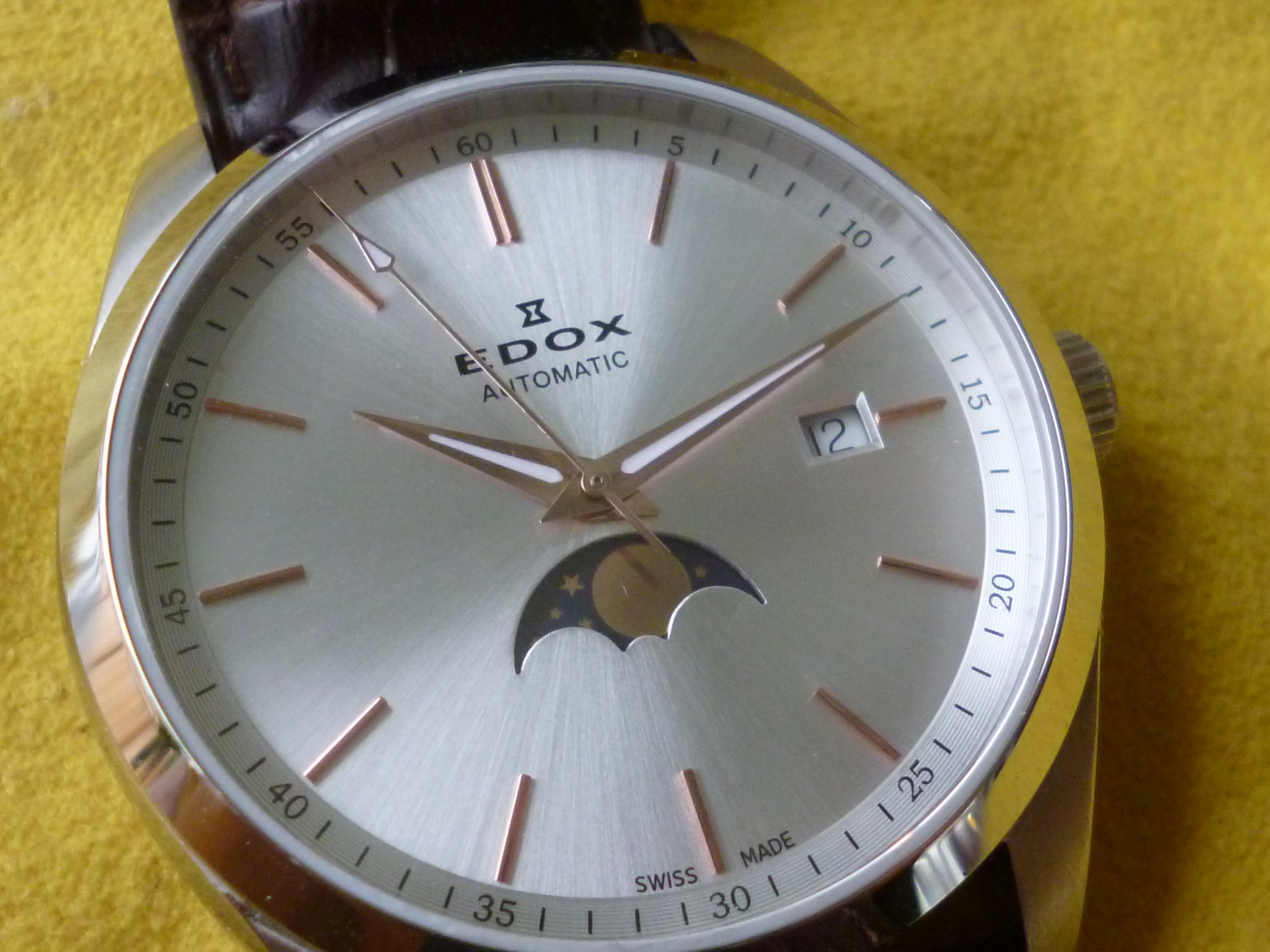 (Sorry about the pics; it was starting to snow again here, and it's very overcast.)

The dial is simple and very, very pretty. I appreciate the lack of writing, particularly something goofy like MOONPHASE! painted on the dial. The finish is a modest sunburst silver, although in dimmer lighting it appears pale gold. The markers and hands are gold tone. The date sits to the right at the three o'clock and, to me at least, appears to seat a fraction of a millimeter lower than it should. The moonphase takes up the lower half of the dial, and it's the tits, with the moon and tiny stars printed in rose gold on a dark blue background. Setting the moonphase is easy, too--just pull the crown to the first position, and rotate clockwise to set the date, and counterclockwise to set the moonphase. The day and moon shift just before midnight, as they should.

The movement runs at 8 beats per second and is running at about +11 seconds a day (before I sent it in for repairs, it was running at +8 seconds.) As this isn't going to be my daily wearer, the accuracy is fine by me.

On the wrist, the Edox looks great:

The relatively short lugs allows it to fit my 6.75 inch wrist. I would have liked it to be 40mm, or even better, 37mm, but it is what it is, and the younger folks like big watches. With the very thin bezel, the Edox wears a little bigger than the 42mm size would suggest, but I can certainly live with it. In the few days I've worn it to work, it was certainly comfortable and didn't feel too big.

This watch actually broke the second or third time I wore it, with the keyless works not engaging and making it impossible to handwind it. Ashford sent me a call tag, and I sent it back to them for repairs. About five weeks later I got it back, repaired under warranty. Ashford's service was pretty quick, and communication with them was very good, and the watch now works the way it should, so kudos to them for this.

To sum it all up, the Edox is a nice, cool watch, for which I paid about the same as Temerity (I was charged sales tax, which brought the price up to about three bills). I needed a nice dress watch (the Edox is slim enough to slip easily under a shirt cuff) and wanted a moonphase, so this watch scratched both itches. Would I have bought it for the MSRP? Nope. But it's a great deal for what I paid.

Behold, the power of gray market!
My little brain can't even comprehend how deep that is.

Many a Watch God can be heard(over an uncounted number of ale filled horns) bellowing their approval of both the review & the bargains attained..

Nice review guys. I'm going to look into this Edox thing.
See you're WRONG I don't work at all, I'm a Democrat. The immortal Horse Feathers as spoken to Chucky Ninetoes.

Great review You guys should start a YouTube blog. Call it “Pair to Beat a Full House” 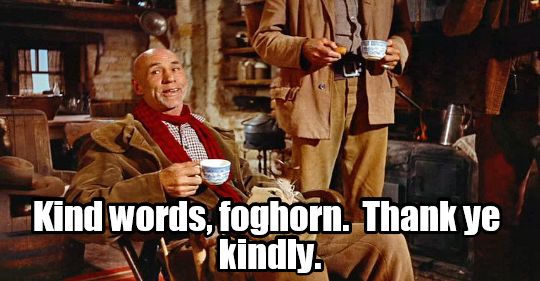 Cool Edox. Thanks for the reviews guys. Nicely done.

I heard the song Dueling Banjos as I read the reviews. Both well done
"Old age and treachery will always beat youth and exuberance"

Nice job guys! Edox definitely flies under the radar. Although after this review the cat's out of the bag!
Post Reply
8 posts • Page 1 of 1