Bad news for the Pacific Northwest

From movies to your mother-in-law, put it here and try not to hurt each other
Post Reply
11 posts • Page 1 of 1

Bad news for the Pacific Northwest 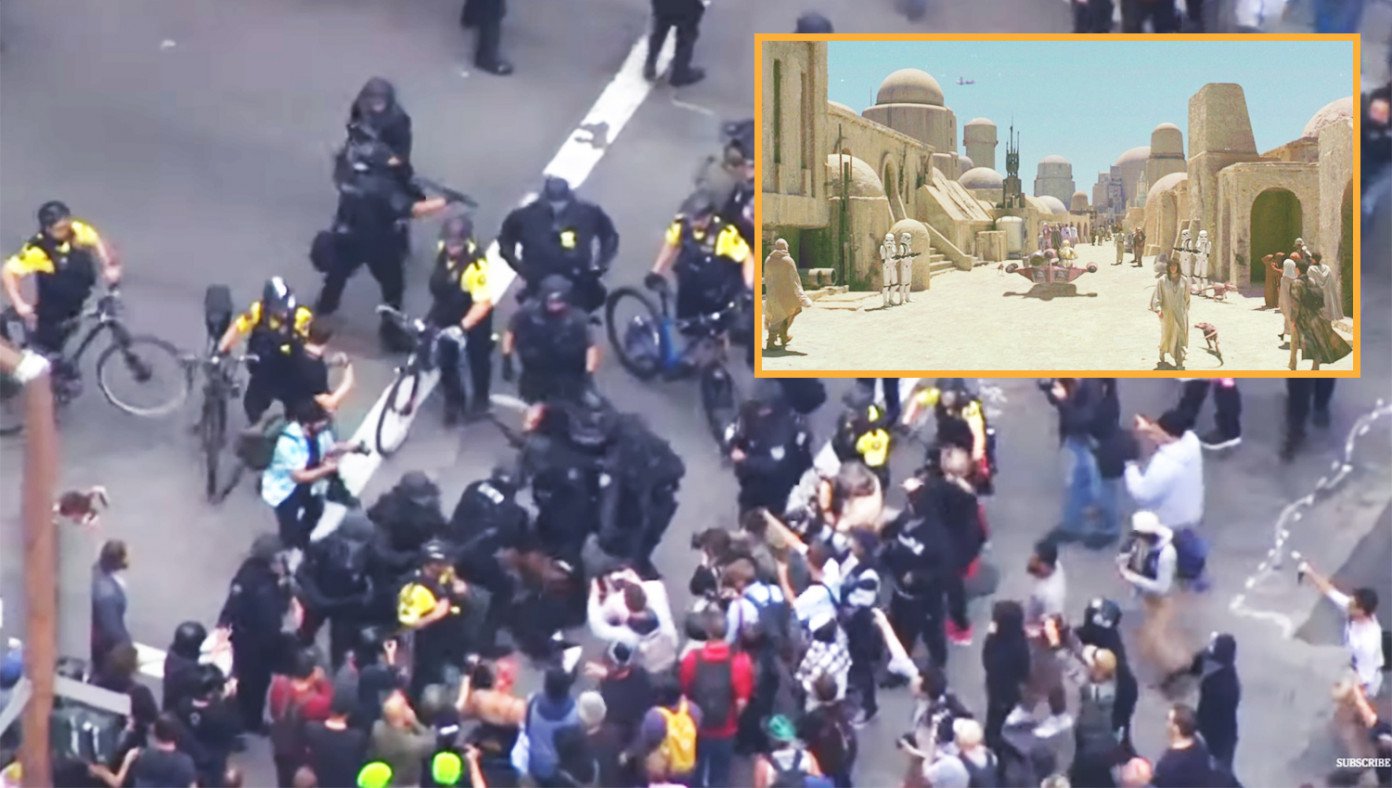 PORTLAND, OR—In a poll of the most wretched hives of scum and villainy in the universe, Portland has overtaken Mos Eisley for the first time.

"Yeah, Mos Eisley's pretty dangerous, sure," said Wuher, who runs a cantina in downtown Mos Eisley. "But criminals here have a code of honor. Just last week, a guy shot a bounty hunter in cold blood right over at that table there. But do you know what he did? He paid me for the mess. That's classy. You don't see that kind of stuff in Portland."

"They're real discriminatory against people they don't like over there, I hear," he added. "We don't hate people here. Except for droids. I hate droids. We don't serve their kind here."

Ponda Baba, a thug and regular hangout at Wuher's bar, says he won't even set foot in Portland. "I got my arm cut off here in Mos Eisley, but it's not like people were throwing bricks at me for my political affiliation. We have standards. And to be honest, I was kinda being a real jerk at the time. I mostly deserved it."

While I usually deplore any references to Star Wars, I would suggest that Aberdeen, WA is actually the cesspool of the Pac NW.

In terms of neckbeards, free bicycles, and hipster doofuses, Portland is unrivalled. But looking at it from sheer despondency, crack hos, and utter abject poverty and drug use, Aberdeen is indeed the king.
My little brain can't even comprehend how deep that is.

I thought Aberdeen was in Maryland where WW1 artillery pieces were tested thus resulting in my maternal grandfather's hearing loss which he reckoned was preferable to being bunghole deep in a trench somewhere.

This made me curious as to what would turn up first in a search for "Aberdeen". Turns out most folks think of the one in Scotland then Washington and only then Maryland. I was chagrined to learn that my preconceptions were exactly backwards. I blame growing up with the grandparents where the mention of Aberdeen was commonly deployed to explain why the TV was so loud.

Then again I also believed the east held the patents on despondency, crack hos and death by overdose at least until relatively recently. Aberdeen, hunh?

Has anyone here ever been to Toulon? In France - just making it clear, should there be some place called Toulon in the US. It's a city in Provence, and a true hellhole. When the fleet's out at sea, the place looks like the set of a post-apocalyptic movie.
The harbour fort bears one trace of a cannon shell, presumably the one after which the city would have surrendered. I wouldn't blame anyone for flying a white flag over Toulon, the place is genuinely not worth a shit-smeared penny.
Garbage flies everywhere in the completely deserted streets, there's not one building that's not filthy and caked in graffiti. A local military monument, a Pantheon-style dome, was full of garbage. Shards of glass on the streets, shattered windows. The frames for the bars in the windows bear crowbar marks (scratched and nastily bent). The only locals to stick their nose out were a few spent hookers, and a guy who wanted to look like a thug, but he had to put the massive, steel chain collars on a few not-so-scary black Labradors, as likely the fucked-up tax rates in France prevented him from owning pitbulls.

I've been to Praga, the nastiest district in Warsaw, and it wasn't so fucking filthy. Even the rust-eaten, decaying post-industrial derelicts of failed state-owned factories in the worst hellholes of Silesia, like Sosnowiec, seem cleaner than Toulon. If you want to scare the shit out of someone, tell them you'll send them there for a day. Nothing's as fucking filthy and repulsive as Toulon.
You cannot explain away a wantonly immoral act, because you think that it is connected to some higher purpose.
Captain Jean-Luc Picard, Star Trek: The Next Generation

I'll have to check out Toulon.

Thus far my most memorable excursion was a week spent in South Chicago. Windows glazed with plywood, housing that resembled Khlong Toei housing except arranged vertically and with a considerably more downbeat ambiance.

Things may have changed dramatically since my visit decades ago but it was something that living in the site of the Rochester, NY riots did little to prepare one for. We were ostensibly there for a week-long class which included a couple of Canadians from Toronto and I believe they're still traumatized as though they had gone to sleep in Toronto and awakened to find themselves in an active war zone. The gang violence was ongoing and law enforcement such a futile endeavor that I learned a new informal but widely accepted term: "Misdemeanor Homocide".

We were housed at a campus that was something like the "green zone" in Baghdad. Reality intruded only when you left but the security was reminiscent of public housing as provided at Attica correctional. The topic was, ironically, builder's hardware and codes which seemed inappropriate at a facility that had no fire exits that weren't adorned with chains of the sort salvaged from a WW2 battleship complete with deck plating. (I believe your equivalent is the guild of architectural ironmongers).

It managed to make Detroit look like Monaco by comparison. I'm assuming it's improved somewhat but I have no immediate plans to personally investigate. But Toulon is now on the bucket list.

Whilst working the Western WA State Fair in Pollup I frequently spent time with friends in Seattle; when they got sick of me I'd go to Portland and I've always really liked it. I have a friend who is a pediatrician there and I know some folks from the pitch business... I was very keen on moving there once but it never worked out.

@conj. Been to Aberdeen and have to agree that it is as oppressive and depressing as anywhere I've ever seen.
Copyright

Some years back, Mrs. C's mother was dying of cancer, and we would drive out at least once a week (at the end, far more often) to visit and help with her hospice care. She and her husband, who himself succumbed to the Big Casino a couple of years ago, were living in Humptulips, WA, which is also one of those godforsaken places on the map where Jesus lost His sandals.

We would drive through Aberdeen on the way, on, IIRC, Washington 101, which led through downtown: 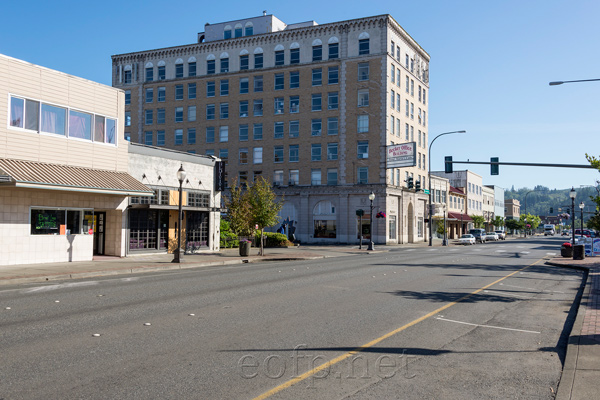 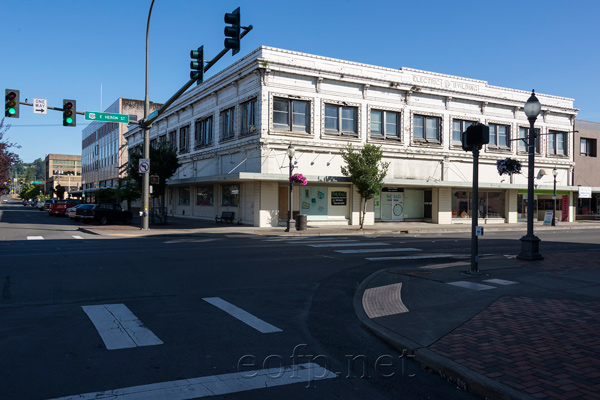 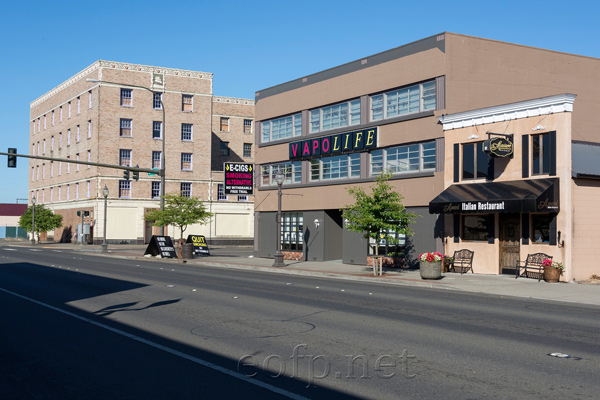 During the 1960s, this was probably a jumping town. There were still nine mills on the waterfront operating, and you can tell from the buildings that while this was always a small town, hanging on the ragged edge, there were plenty of union jobs in logging and milling, and they supported a small but vibrant downtown. One can easily imagine Christmas here, with the usual Olympic rainstorms but with plenty of lights, and guys wearing their Sunday suits and ladies wearing white gloves, heading out to shop for their kids. Alas, not long after this, the clear-cutting and the Spotted Owls closed down the mills, and the union jobs went away.

And now, all that's left are the old buildings, mostly vacant. And now it's all drug addiction, and joblessness, and despair.

I being completely unironic here. Here, the American dream died, and it ain't never coming back.
My little brain can't even comprehend how deep that is.

Dude Forks must be hurting too?

Bad news for the Pacific Northwest: did Starbucks close? I saw this in Orange County CA. Homeless (drug havens) everywhere along the river. liberal judges gave them the right to stay. Made the city pay hotel bills. Free drugs and needles.
Nearby city if Anaheim and Santa Ana had camps in city parks and civic centers. Beggars on the corners. Shit on streets. Yet all was condoned, unless you were employed, taxpayer types.
I just sold and moved the fly over country. Wow. What a difference.
I’m seeing the future in most liberal areas as what Chicago has become.
Sad.
Post Reply
11 posts • Page 1 of 1