First of all, thanks to everyone for keeping the Seiko vs. Rolex thread civil and respectful (for the most part) . JBond and a couple of others mentioned that they'd like to know more about Seiko's history as it relates to Dive watches. There are several sources online that delve into this subject, but the post below from Ryan on the SCWF is a good summary. I've reposted it here because the text formatting is a bit messed up on the original. I also added some pictures of the divers mentioned. It's from 2001 so it doesn't cover Spring Drive and other new technologies, but it's got some good historical info. The original can be found here: http://www.network54.com/Forum/78440...l+Divers+Watch. As stated by Ryan, most of this information came from the Japanese language book The Seiko Book; The Real History of Seiko Watches, and was translated by his wife. Keep in mind that this only covers the development of the Professional dive watch series, but there are many other highly respected 'workhorse' Seiko divers like the 6105 and 6309 series. Much more has been written about those models, and many here own one or more. Thanks to everyone who's taken the time to research this history, and to those that took the great pics of these historic watches (especially the legendary Chris Moy ).


The original thread at network 54http://www.network54.com/Forum/78440/message/1000299341/History+of+the+Development+of+the+Seiko+Professional+Divers+Watch

Many who have owned Seiko diving watches over the years have been impressed by the robust performance and high quality of these instruments, without being aware of the efforts that have gone into creating these fine timepieces.

The history of the development of the Seiko diving watch is quite interesting.

It all started the year after the 1964 Tokyo Olympics, when a wave of pride swept through Japan, and the country felt it had re-entered the world stage following its defeat in the Second World War.

Designers at Seiko felt that making a first-class diverÕs watch was important for their company, because a diverÕs watch is Òthe ultimate testÓ of watch-making skills. After all, a diverÕs watch must be waterproof, shockproof, and highly luminous. At this early date (before the advent of dive computers), divers literally placed their lives into the hands of their watches. Engineers were proud of this first effort.

Two years later, in 1967, Seiko engineers released the 300m automatic diverÕs watch (6215-010). They felt it was a great feat to be able to double the depth at which a Seiko diver could be used.

Confidence within the design team was never higher, and in 1968 they felt they had really out-done themselves by releasing model 6159-011, which used the same Hi-Beat caliber automatic watch movement as the Grand Seiko.

But, following close on the heels of these triumphs -- three successive models released in four short years -- engineers received a shock that delayed the release of their next new diverÕs watch model for seven years.

In 1968, following the release of the 300m automatic Hi-Beat movement diverÕs watch, Seiko engineers received a letter from a professional saturation (SAT) diver from Kure City in Hiroshima Prefecture, Japan.

He concluded his letter by saying these watches were totally unacceptable for professional divers.

Seiko management, stunned and taking this letter very seriously, quickly assigned a team to create a whole new Seiko design, one that would be created specifically for the professional diver.

And times were changing.

When Seiko introduced its first dive watch in 1965, the market for these watches was relatively small. But during the late 1960Õs thru mid-Ô70Õs, the popularity of outdoor sports such as fishing, camping, hiking, not to mention scuba diving, greatly increased the market for diverÕs watches.

In 1975, Seiko unveiled the Seiko Professional 600m diverÕs watch (6159-022). At 89,000 yen it wasnÕt cheap, but it took seven years to develop and contained many firsts, which are considered standard features of many dive watches today.

It was the first diverÕs watch that had a titanium case, and also the first with a rubber strap with three ribbed vents on each side.

The reasoning behind making the case of titanium was that the space-age metal is extremely lightweight, and highly corrosion resistant. As for the strap, at high pressure (great depths) wet suits tend to Òshrink,Ó so a ribbed strap will stretch to compensate for this fact and put less pressure on the pins that hold the band to the watchcase.

In addition, the watch was anti-magnetic, highly shockproof, and highly luminous. And, Seiko engineers had again doubled the depth at which a Seiko could be used, this time from 300m to 600m.

However, the biggest breakthrough the design team made was perhaps the development of the case itself.

Using ÒbuchiruÓ rubber packing and a special waterproof structure, Seiko created a watchcase which helium gas could not penetrate during SAT diving. This eliminated the need for a helium relief value, which some Swiss watch companies had developed in order to vent helium gases that entered their watches during SAT dives.

I believe the first quartz powered (600m) professional diver was released by Seiko in 1978.

In 1986, Seiko released the 1000m Professional diver. It was powered by a quartz system, and included an outer case of titanium coated with a special ceramic material to help it avoid scrathes during hard use.

This model is currently being sold as SSBS018. Among its many features, it has a low-level battery warning system.

Other models in the Professional DiverÕs watch series have followed, including the Prospect Marine Master 300m automatic and the 300m professional quartz, which along with the 1000m pro diver, can be purchased in Japan today.

For example, I've not been able to find any information as of yet on the development of the 7s26 200m diver, which may be the most popular and famous of all the diver's Seiko has ever produced.

I hope to gather more information, add images, and make a more complete history sometime in the future.

Much of the information contained in this essay comes from ÒThe Seiko Book; The Real History of Seiko WatchesÓ (Tokuma Shoten, Tokyo, 1999), although other information I gathered from various sources on the Internet, as well as from other Seiko publications (catalogs).

As always, thank you to my wife for helping me translate this information.

Wow Koi some very good information in there. Thank you. I love reading about Seiko watches I guess.

Kahuna74 wrote:Wow Koi some very good information in there. Thank you. I love reading about Seiko watches I guess.

I wish I could have written it but the credit belongs to Ryan. 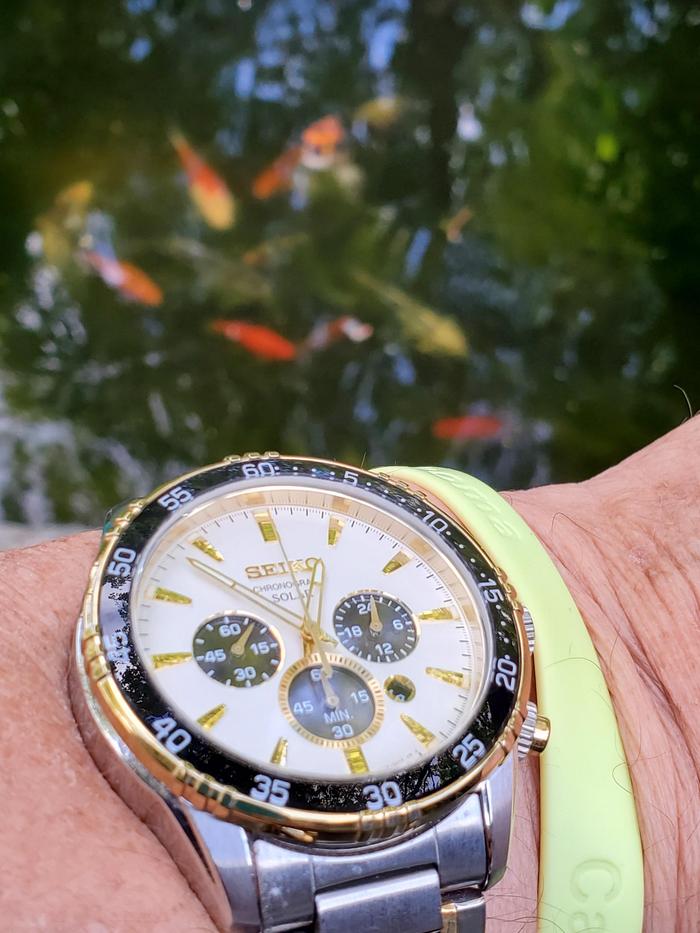