From Sothis to Blancier, all things German
Post Reply
4 posts • Page 1 of 1

Union Glashütte is a German watchmaker that offers mechanical chronographs and calendar watches at a midrange price point.
When it began, the company sought to provide Glashütte quality and aesthetics to those seeking a more affordable watch.
However, it has also sold higher-end, more complicated offerings at various points in its history.
The Union brand has changed hands over the years, but its Glashütte location and basic philosophy have stayed the same.
A sister Swatch Group watchmaker to Glashütte Original, this brand is mainly available in Western and Central Europe.

With its roots in the 19th century, the Union brand has long sought to provide good-value German quality of design.
Though most of its watches historically excluded expensive luxury materials, the company has occasionally made high-end watches alongside these.
This is also true in the current era, for example, in its gold and rose gold editions.

The Union Emerges
In 1880, Johannes Dürrstein first sold watches under the brand “Union,” but the company that became Union Glashütte began later.
This was the Glashütter Uhrenfabrik Union, and it was here in 1893 that Dürrstein and his craftsmen realized his vision.

Johannes Dürrstein’s Big Plan
At this time, Glashütte was home to several other watchmakers.
However, Dürrstein sought to serve the section of the market that couldn’t afford these expensive pieces of haute horlogerie.
Therefore, the company made watches with excellent workmanship and good accuracy, but without premium materials like gold.
While doing so, Dürrstein and his expert watchmaker Julius Bergter also worked to create luxurious complication pocket watches.
These included, for example, a watch with Louis Piguet’s “La Fabuleuse” grande complication movement, assembled in Union Glashütte’s workshop.

The Death And Revival Of Union
Although the company enjoyed a few more decades of success, in the late 1920s and early 1930s, business declined.
The firm shut down in 1933; afterwards, the brand would be absent until the 1990s.
It only returned after German reunification, when private companies emerged from the remains of the East German state conglomerate VEB.
In 1996, the Union brand was back in action; during this period, the brand used Glashütte Original movements.

New Life Under Swatch
In order to better fit the brand within its portfolio, Swatch Group reimagined Union Glashütte as an upper-midrange watch brand.
Therefore, it now fits alongside Swatch brands like Longines and Rado.
However, Union timepieces are still, on the whole, more affordable than those of many other prominent Glashütte brands.
Because of Swatch’s vertical integration model, Union Glashütte now uses ETA movements, some of which are exclusive for Union.

Only some of the parts come from Switzerland, however; Union’s watchmakers make the rest, combining them with the Swiss parts.
Glashütte-made components include rotors, bridges, and balance cocks, for example.
Alongside a rhodium electroplating process, Union’s watchmakers decorate these with perlage and the traditional Glashütte stripe finish.
Due to German law, the watches must consist of at least 50% Glashütte-produced components by value to claim Glashütte origin.

These are still ETA designs, though, and that does bring a certain advantage.
Although Union Glashütte watches are relatively uncommon, some of these ETA movement designs are common and, therefore, easier to service.
https://bespokeunit.com/watches/union-glashutte/

The one Union Glashutte I currently have is this baby.. 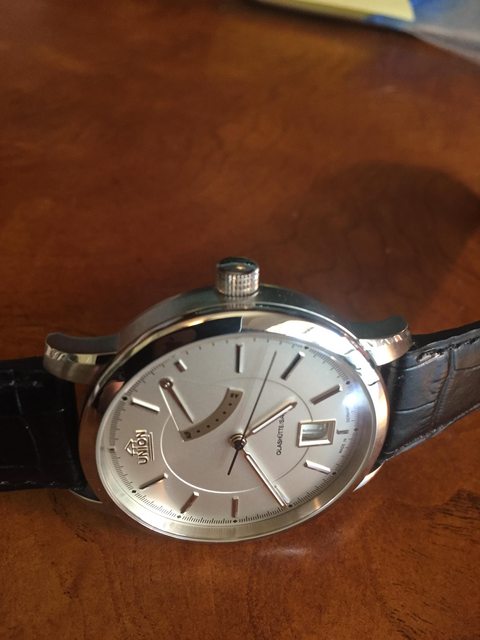 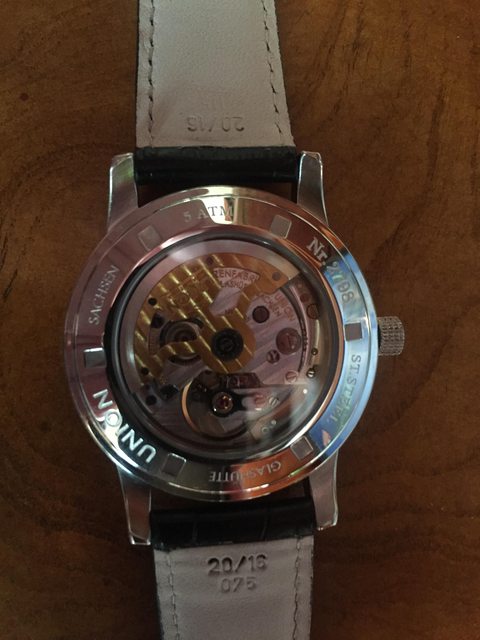 [i]The dial appears to be enamel, but it may not be..it features a unique movement, but they don't seem to claim that it is new(took them 2 years to develop)..
""New is an inhouse manual wind caliber, which was completely designed by Union Glashütte and will be used in the anniversary models of the "1893 Johannes Dürrstein Edition". This new caliber UNG-56.01 shows typical Glashütte features like a 3/4 plate with delicate gold engraving and the chararacteristic striped finish. The movement is also signed with the Dürrstein logo, a stylized temple. It has 60 hours reserve, small second, date and power reserve"

You never know how much is marketing - this is obviously not a standard ETA, but whether it is totally inhouse designed, or by someone else (possibly Swatchgroup), but exclusively for Union - hard to tell. Anyways, the 3/4 plate is rather distinctive. More about that further down.
The dial is "only" enamel appearance(that is from their own website).
What is interesting is a remark about the movement - it being not a complete new design, but utilizing/combining partly ETA components (which is not so uncommon)..

"A plate of the A07.161 (Valgranges with power reserve) reduced to 30mm, wheeltrain from a 7750 and ratchet from a 6497/98-1 on a new bridge. What is "new" is the 60 h reserve, which might be achieved by slowing it down to 3 Hz".
The guy posting this is an Austrian watchmaker called Richard Habring - I am certain he knows what he is talking about, he manufactures high-end himself. There are other remarks going in the direction of "You never know how exclusive this will remain", and - looking at the price of the steel version - I would also believe so (that means the same movement might show up at other vendors, but then likely with regular bridges, not the 3/4 plate (at least that I would assume)""[/color]

In better days they made GO style watches with lesser finishes and nice prices. Now they make pop watches for euro trash. Unless they've changed again.

I remember the brand from about 10 years ago and they did make watches that were similar to GO as tictoc mentioned. Not too certain of the quality today though but still a decent price point.

The 1893 Johannes Dürrstein Edition is still on my short list...

Ebels are a lot like women that lack a low cut dress that zips up the side...neither get the love that they deserve...
Post Reply
4 posts • Page 1 of 1