Mr. Phluff takes a look at the latest in Oris' "Culture Series" - a tribute to Roberto Clemente. Love the caseback! 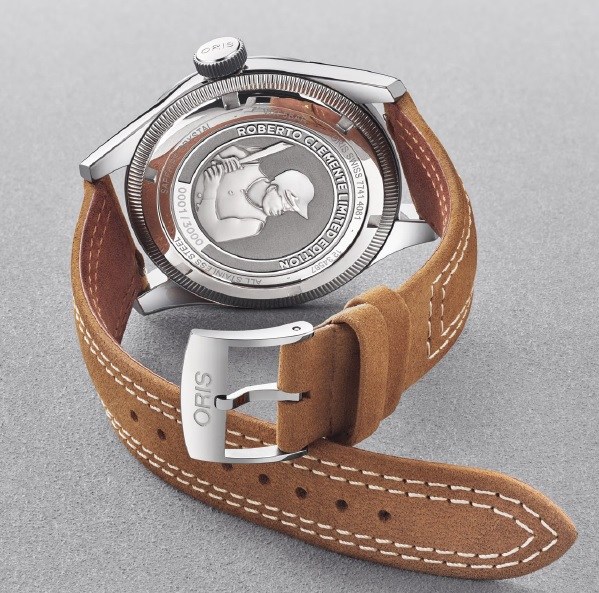 The wristwatch world is heralding Oris’ new Caliber 400 automatic movement – and it should, as this might be the advent of the longtime brand establishing itself as a serious peer with every other Swiss company. However, another new release has caught our eye in a big way: The Oris Roberto Clemente Limited Edition, released in September as the latest of Oris’ long-running series of “homage” pieces.

Frankly, we’ve felt the numerous Oris homage watches are among the most underrated (and stylish) series of watches of the past couple of decades, and watches that aren’t noted nearly enough. Issuing beautiful, versatile limited edition pieces for everyone from jazz stars Dizzy Gillespie and Dexter Gordon to pop stars Frank Sinatra and Bob Dylan to divers and scientists, Oris realizes these watches are pretty “niche” in their subject matter, but keeps releasing them regardless. There are a lot of watches based on sports, but there isn’t one we can think of that comes close to the quality of this new model honoring Roberto Clemente, the legendary Hall Of Fame right fielder for The Pittsburgh Pirates (and a genuine multi-cultural hero for his humanitarian works). The watch honors the charitable Roberto Clemente Foundation as well.

https://bobsotherstuff.com/oris-roberto-clemente/
Rule 1,493: Never photograph a watch on a wrist. On a lovely rock in a pond or a parapet, certainly - but never on a wrist.
- Chapter Seven, The Bazinga! Way To Become A Blogger Billionaire

That's a damned nice looking watch. Fair price but would be better if were 38mm.
My best friend from college shared his secret to his huge financial success, "I fell out of the right vagina."

I have been against sports tie-in watches for ages. Never would get near 'em.

So why do I like this one so much? It's Clemente - this really seems like the perfect tribute, and heaven knows it's not junk.
“Listen to that – just beating away! So easy! … Ohhh, look at that!” - “Chef” Daniel Green, Gotham Stack Master (miracle cookware) infomercial
Post Reply
3 posts • Page 1 of 1