A Vintage Lemon Behind a Modern Reissue

A Vintage Lemon Behind a Modern Reissue

This year, so far, is being rather horrible for just about everything and everyone. Novelties on the watch market seem to not have been affected all that much, though. Sure, watch fairs were cancelled, but scores of nice, new models have been released anyway.

When I had a look at the brand new Certina catalogue before the official premieres of some of the new models, I was quite astounded to see this gorgeous thing:
https://monochrome-watches.com/certina- ... iew-price/ 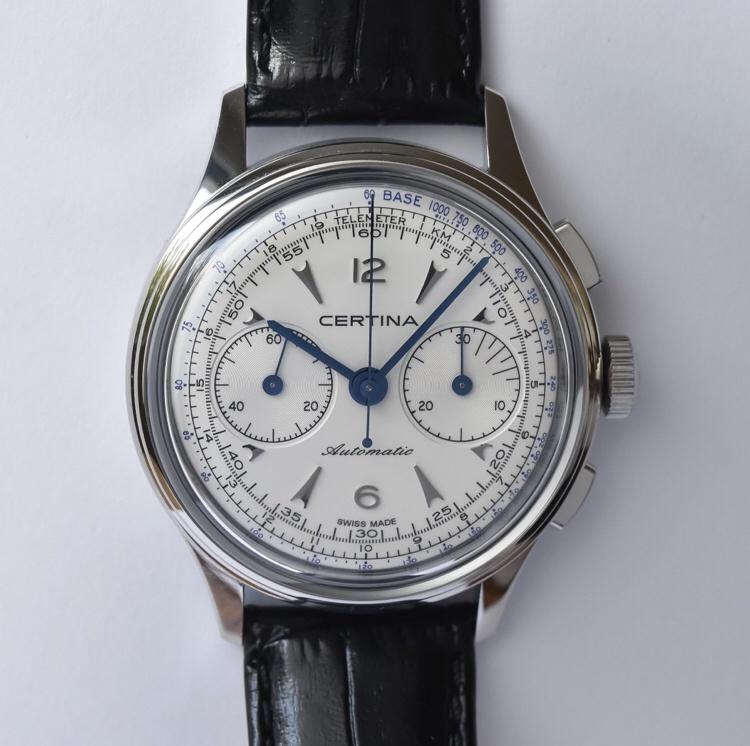 Photo from the article in link. Filched for academic purposes.

Certina has - apparently - provided a photo of the inspiration behind a watch, supposedly something they have made in the 1940s: 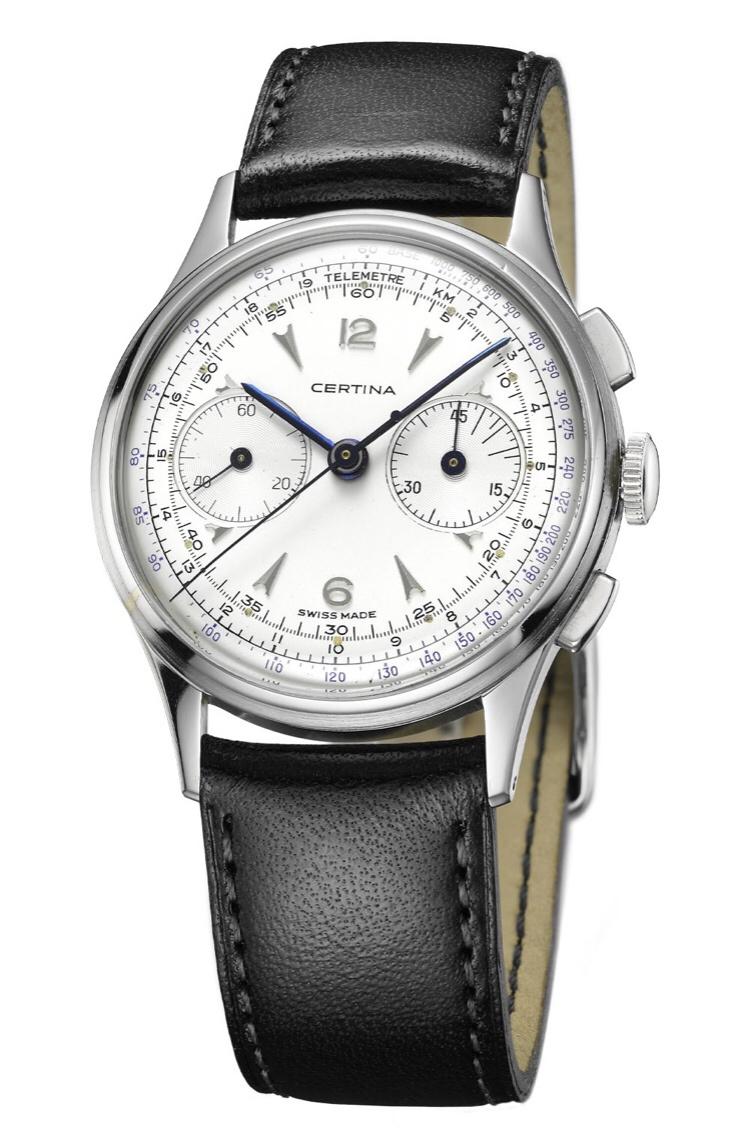 Nice watch, no? So, what's the problem here? Well, the problem is this: it is highly likely that the watch is a redial or a franken. Or, worse, both.

Let's have a closer look... 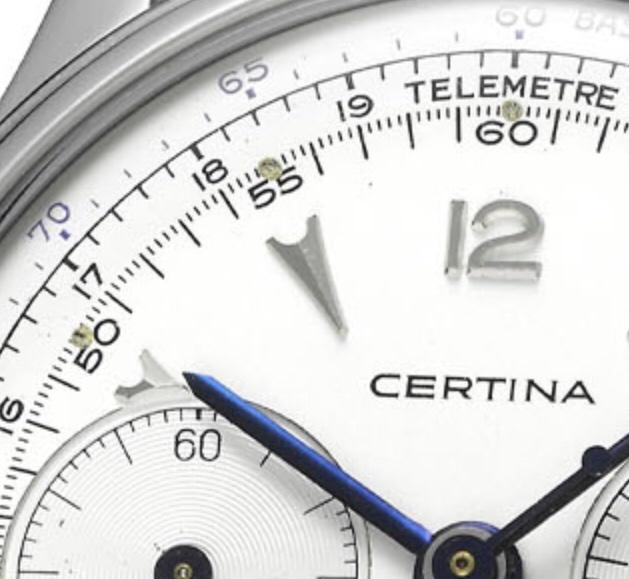 The first and most obvious red flag is the fact, that while the dial has lume plots on it, the hands don't, and were never meant to. While the crime of using a combination of a non-lumed dial and non-lumed hands has been committed in the past by many - and is still being committed now by some of the great names in the watch industry - I'm pretty confident that a travesty like a lumed dial and non-lumed hands is far too idiotic to have actually been a thing, ever.

Second, let us focus on the claim of the "original" watch being from the 1940s. Well... 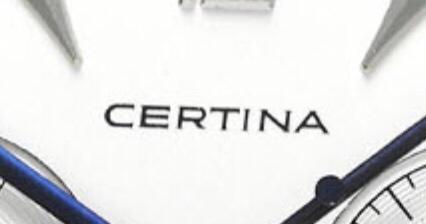 I don't know what that thing is, it's a nice-looking thing for sure, but it's a travesty worthy of the long-gone VintageCaliber, some accursed horological dumpster along the lines of Wannabuyawatch, or perhaps would fit just fine in a "The Best of Hodinkee Shop" compilation.

What could this be? A late 1950s/early 1960s piece in a 1940s style, along the lines of the ones that Certina equipped with the Excelsior Park movements? A piece that does date to the 1940s, but has been equipped with a later service dial and was given an incorrect handset? Or maybe all except the dial is OK? For what it's worth, could well be a redial.

If this is what I think it is, I'm really disappointed with Certina. The "reissue" is nice, and with its finishing and specifications, it really seems like a very appealing watch. Alas, whoever let that "original" be used as inspiration has failed, and quite miserably at that.
You cannot explain away a wantonly immoral act, because you think that it is connected to some higher purpose.
Captain Jean-Luc Picard, Star Trek: The Next Generation

I like the reissue but 42mm? That's some bullshit.
"When things are at their darkest, pal, it's a brave man that can kick back and party." - Lt. Tuck Pendleton, Innerspace

Well spotted. I zoned out at "42mm" (oh good, another 42mm chronograph with a 28mm movement) but the snot plots... I can't believe they missed that. Actually no I can, what I am saying? I can easily believe that some moron in marketing missed that.

The font on the so-called 1940s original looks like it was actually added on. It may not even be a Certina at all.

I like the reissue but 42mm? That's some bullshit.


They believe that no man would wear a dinky watch so they scale it up. They've been infected with Invictitis.

And all those urbanites driving F-250s to the Whole Foods hasn't helped.

I have posted in the comments section of the article. I must say that the fellow at Mono did a good job - acted as a watch journalist should. Contacted Certina, and passed their response on, while staying impartial on the record. 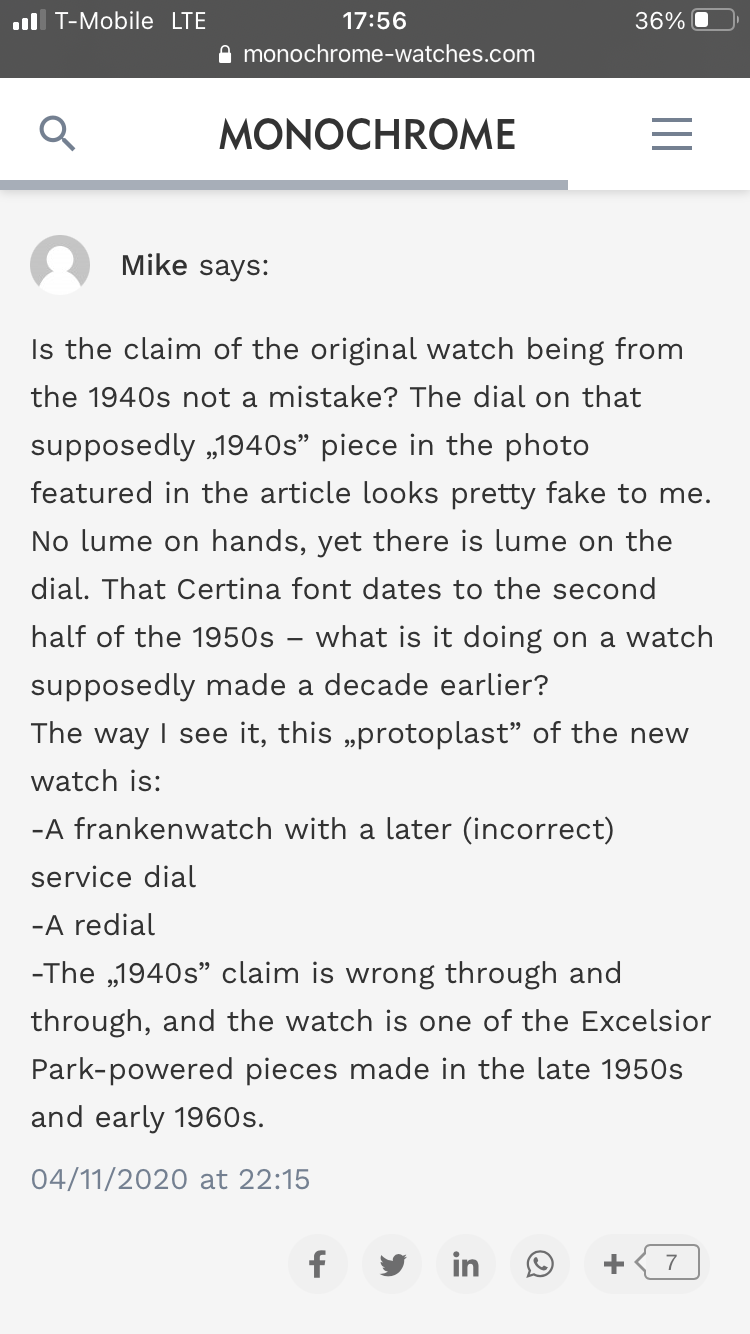 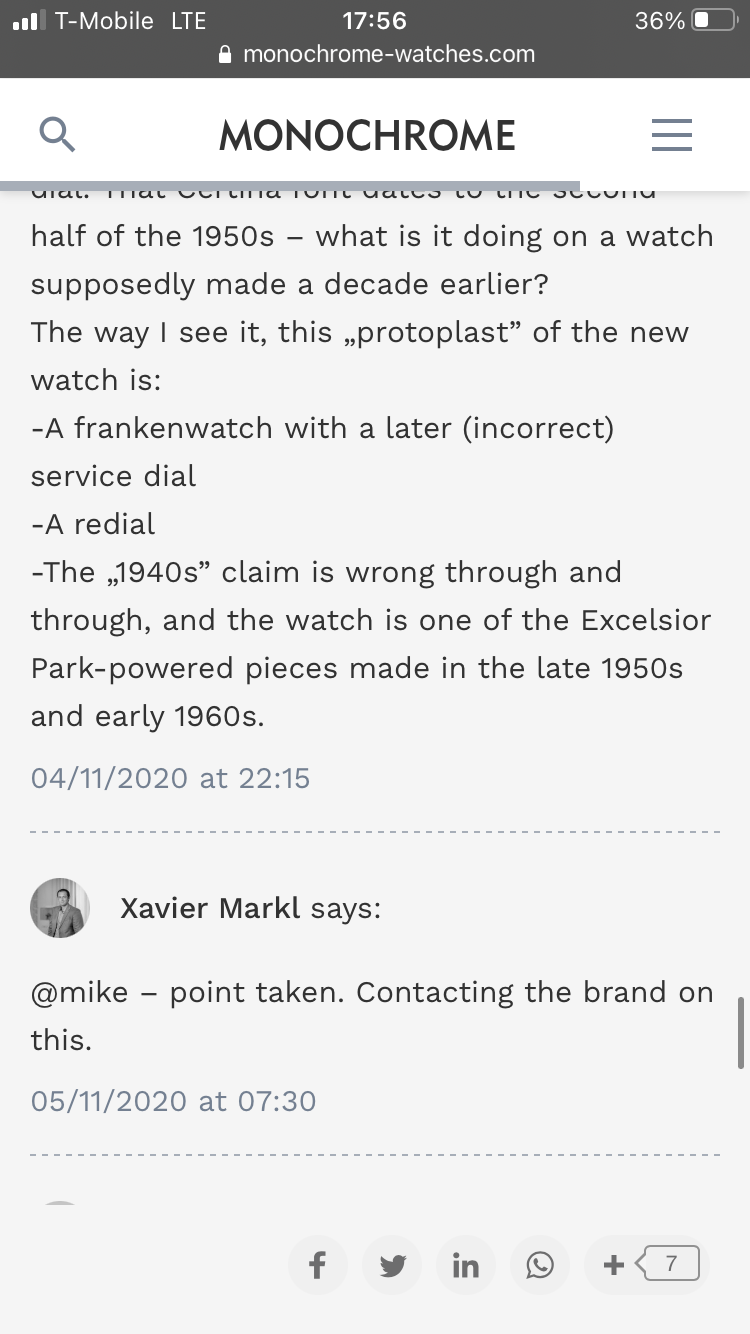 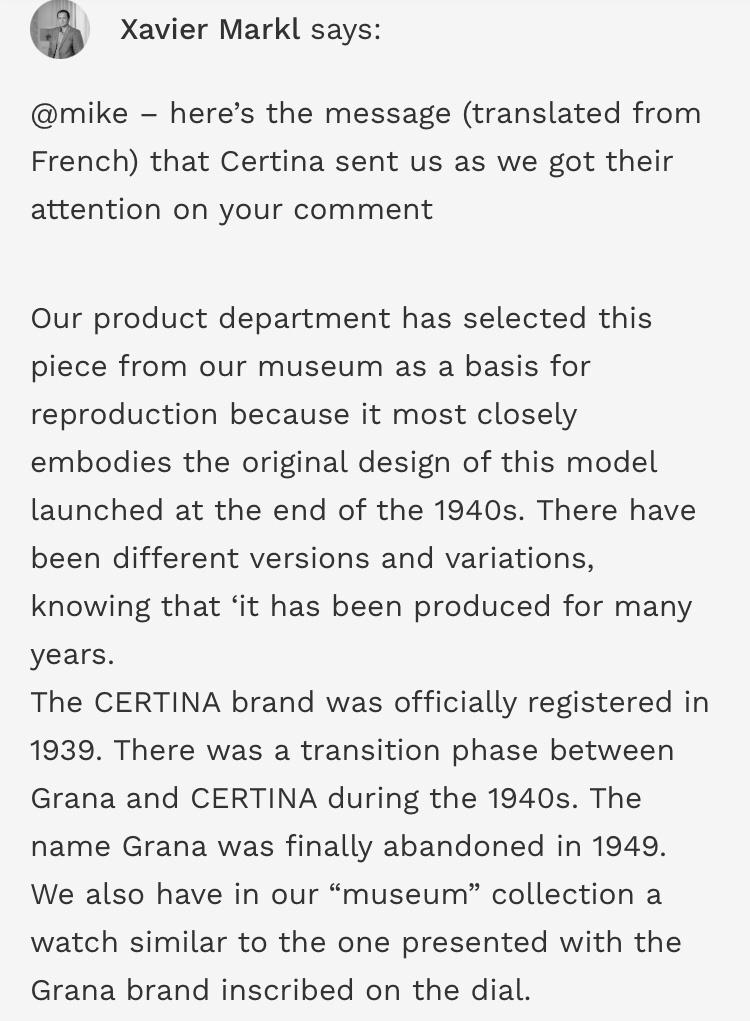 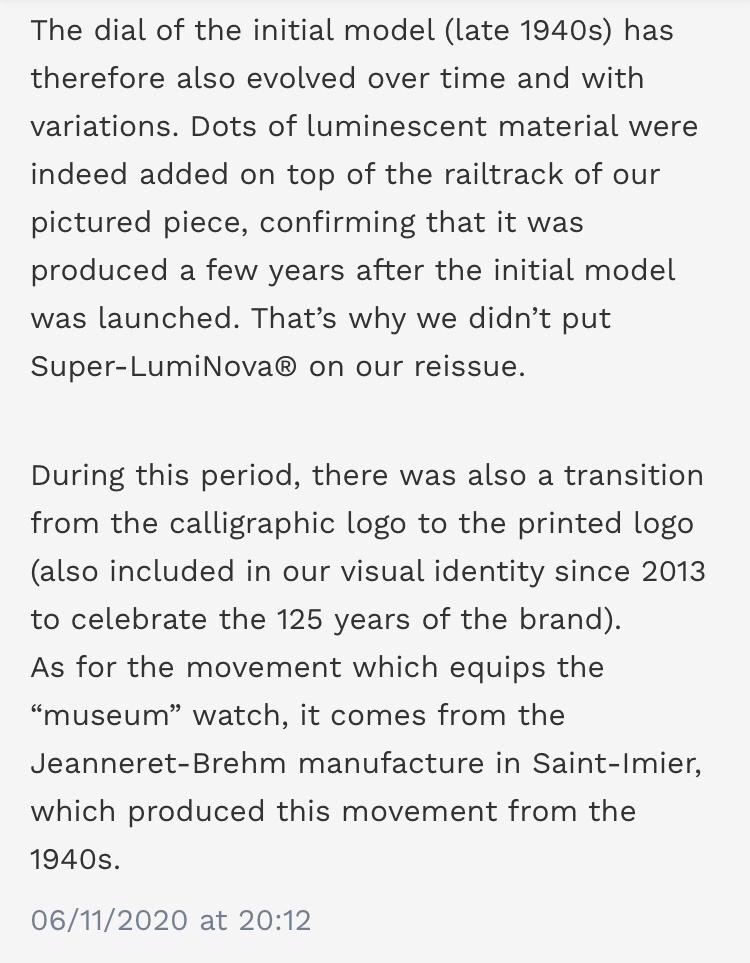 The response from Certina is the PR sort of Pythian, but if I read that correctly, the dial was made later than the ”protoplast” watch itself, and thus is a service dial. And the movement is indeed an Excelsior Park, probably the EP4, because Jeanneret-Brehm, tied to Racine/Gallet, made the EP movements alright.
You cannot explain away a wantonly immoral act, because you think that it is connected to some higher purpose.
Captain Jean-Luc Picard, Star Trek: The Next Generation

Good for Certina in that they were honest about the watch. Fantastic work looking at the vintage specimen and being able to call it correctly, MK.
"When things are at their darkest, pal, it's a brave man that can kick back and party." - Lt. Tuck Pendleton, Innerspace
Post Reply
6 posts • Page 1 of 1