You folks are the very first westerners to see this. I'll be posting more, in more detail, when I get back to Canada, but I've had quite an afternoon, so here's the story.

Over the years I've been involved with Chinese watches, I've known a few folks who have ventured to the site of the original Shanghai Watch Factory, with hopes of maybe seeing inside. To my knowledge, no one made it inside, although a number did see the SWF stores that are adjacent.

So, I was hoping, but not at all really expecting any luck, when I ventured to the site with David Rodriguez, who is the owner of small but dedicated Shanghai WeChat watch group called Watch-a-Holics.

When we arrived at the old Factory location, the security person appeared completely disinterested in talking to us, but David caught the attention of a person who was walking by wearing a loupe. David speaks some Chinese so, as he tried to explain what we were hoping for, I pulled out my CHA membership and my AMCHPR business card.

The person we'd met was very polite but seemed not that engaged at first, but after seeing the card and my CHA membership, he took us *inside* and up an elevator to meet some one even further inside. This next person introduced himself as Mr. Cai and made a phone call as I handed him my "credentials," such as they are.

Well, I don't know--and may never know--who he phoned but his straight and polite demeanor changed to broad smiles as his phone call progressed over a couple of minutes...

...and next thing we knew, were handed some refreshments and promo materials, and then taken around to take some photos and have questions answered!! It turns out that Mr. Cai is Secretary-General of the Shanghai Timepiece Trade Association, and he became our very friendly guide around the place.

So, here's the very first "inside the factory" shots I know of that weren't Shanghai promo or Chinese news shots 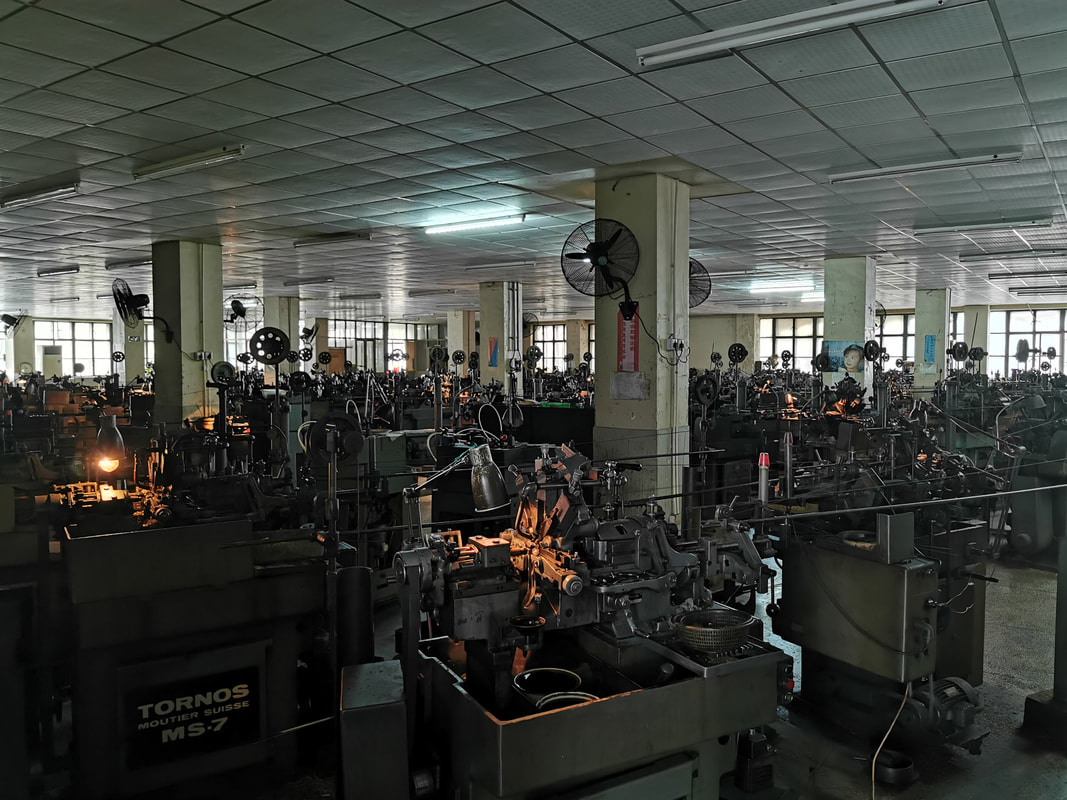 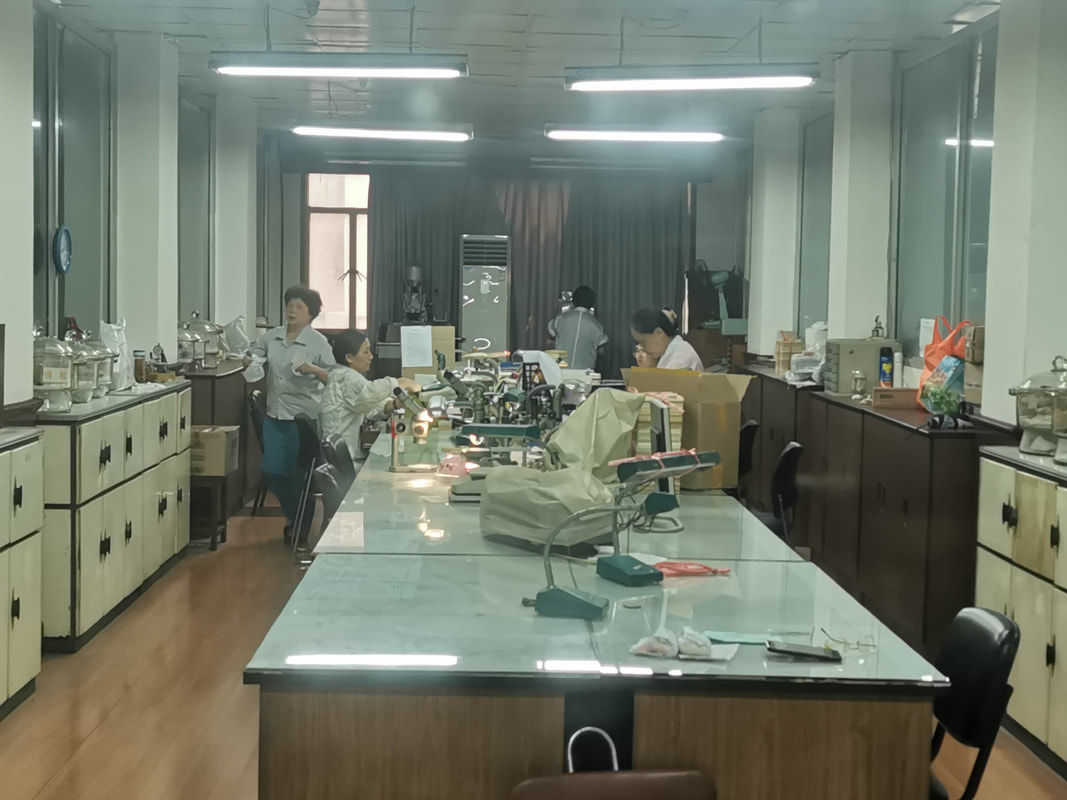 The next photos are of Mr. Cai and me, inside the boardroom, and... 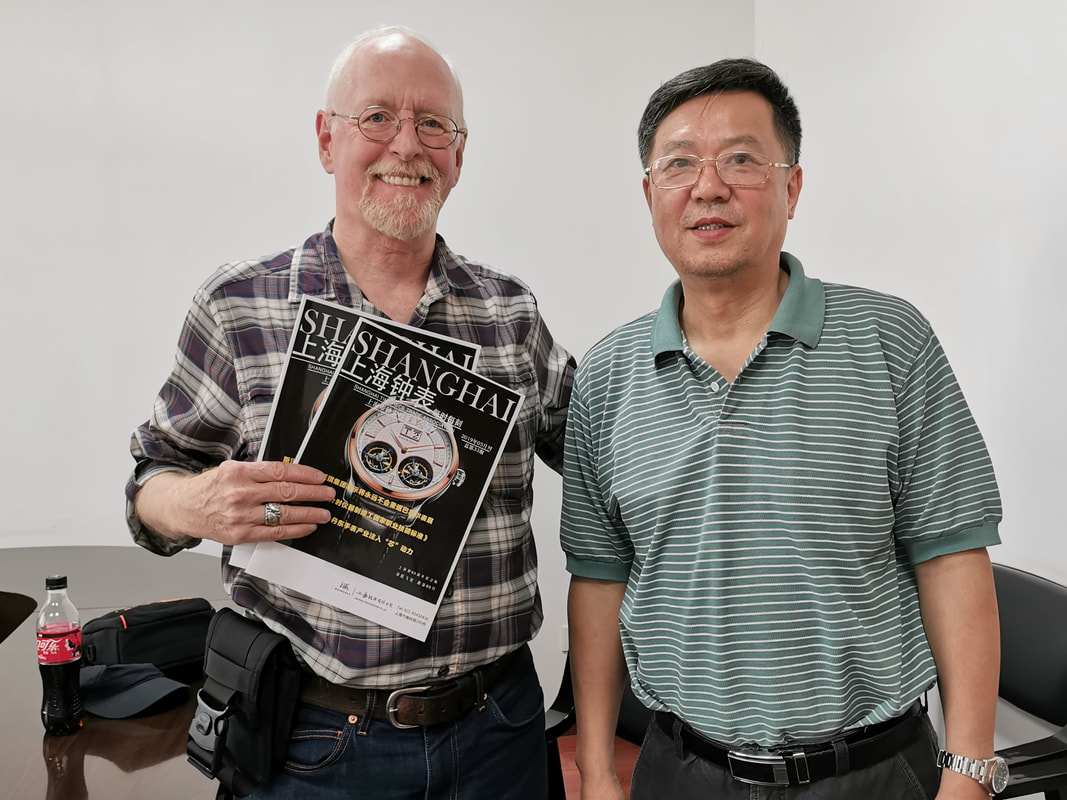 ...in the lobby underneath some SWF script, and... 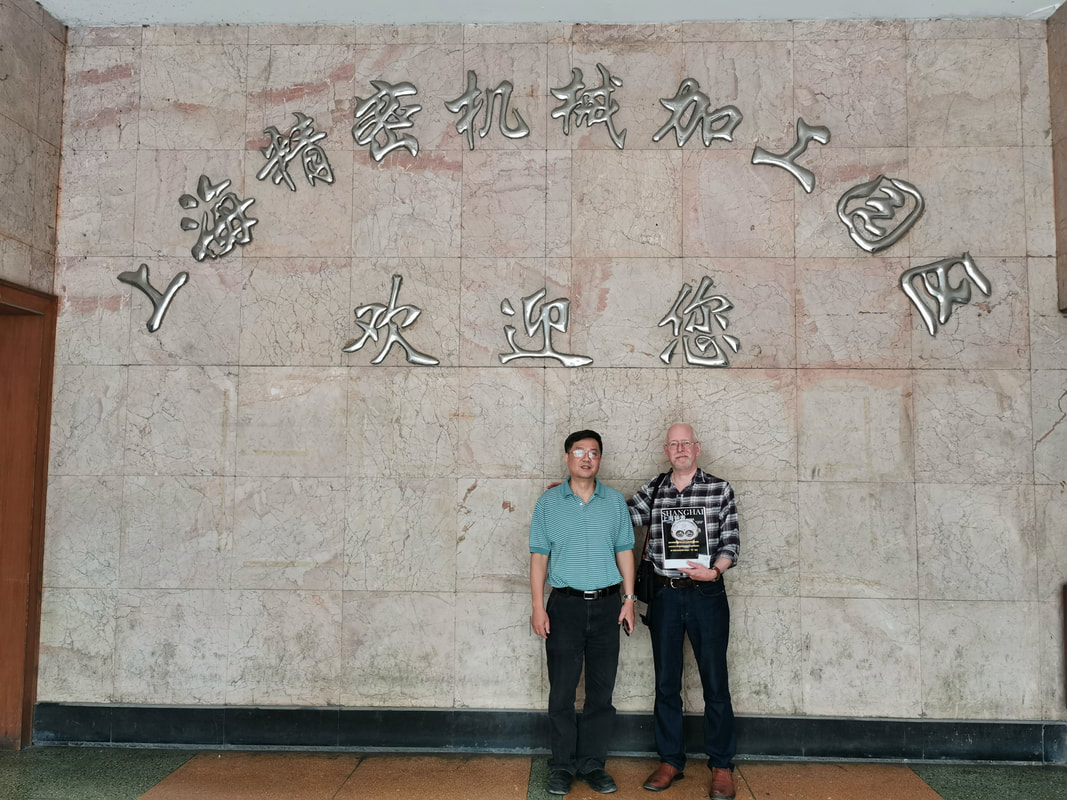 ...with David, as he showed us around the adjacent factory out let stores adjacent on Yulin Road. 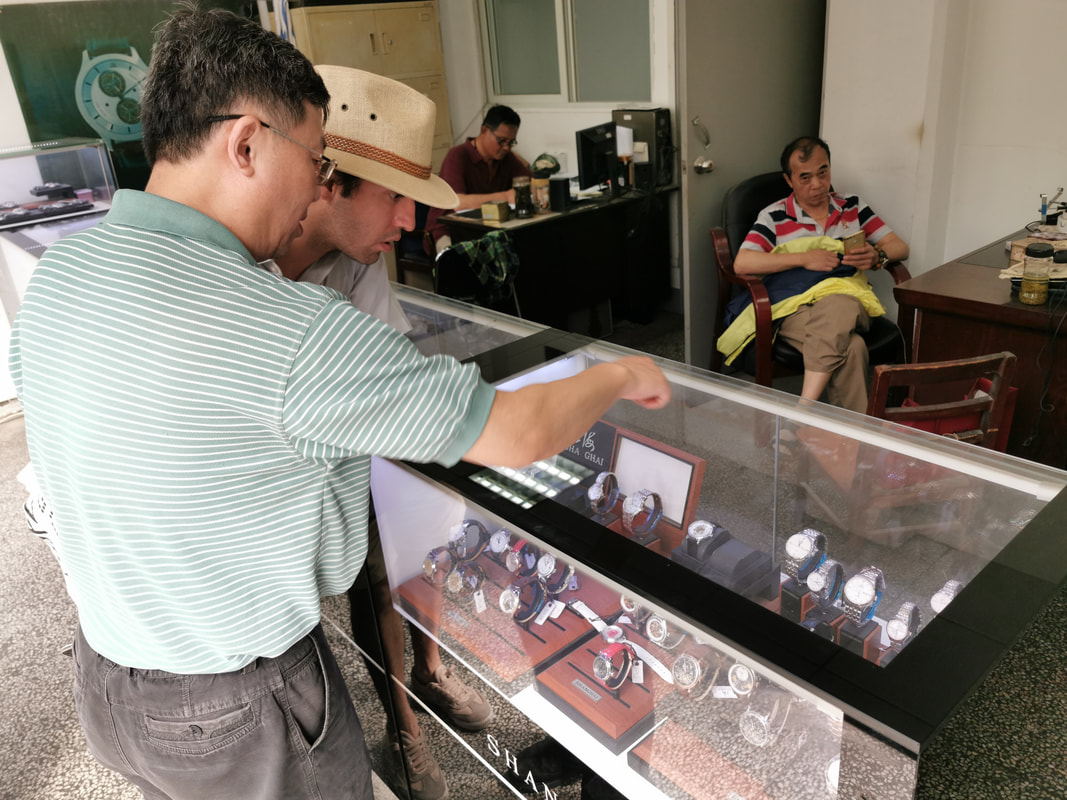 The next five shots are stuff I shot that was hanging on the factory walls. 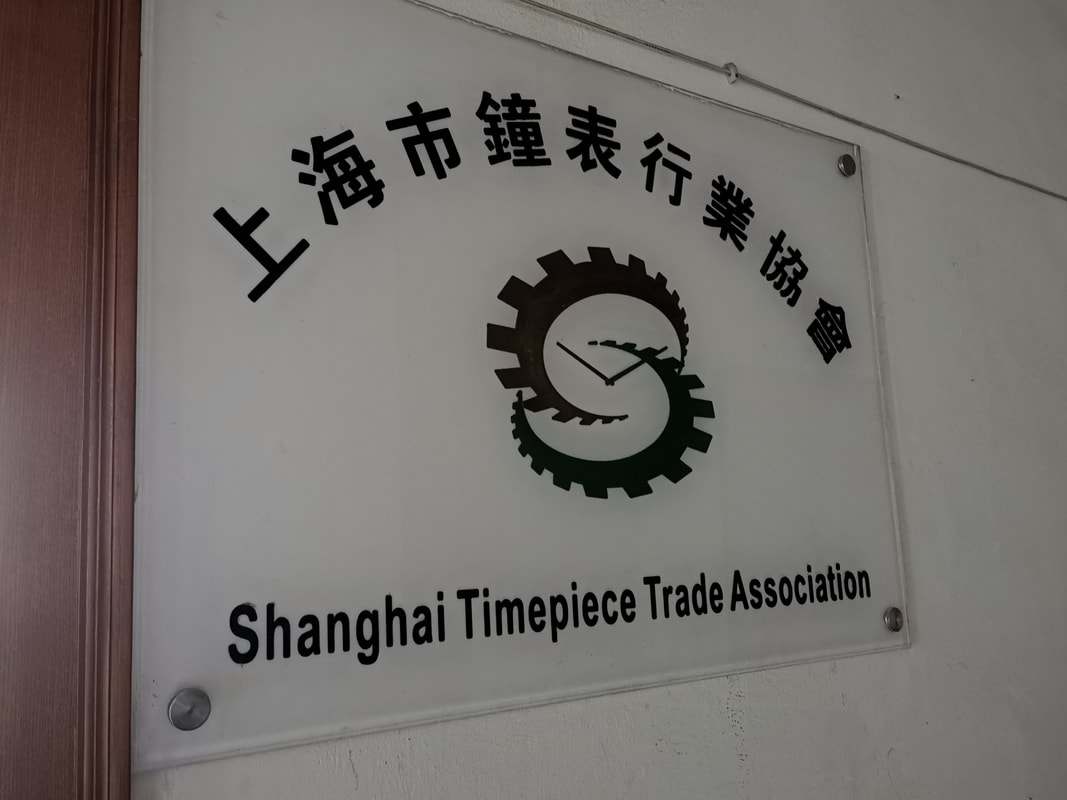 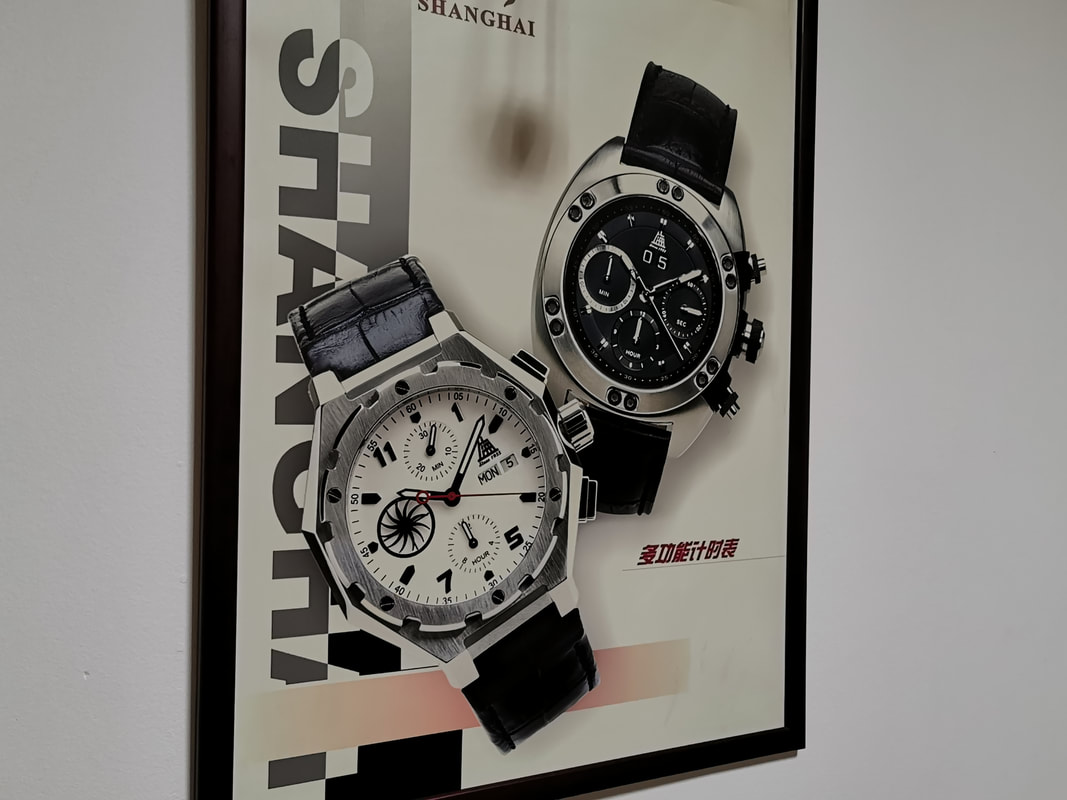 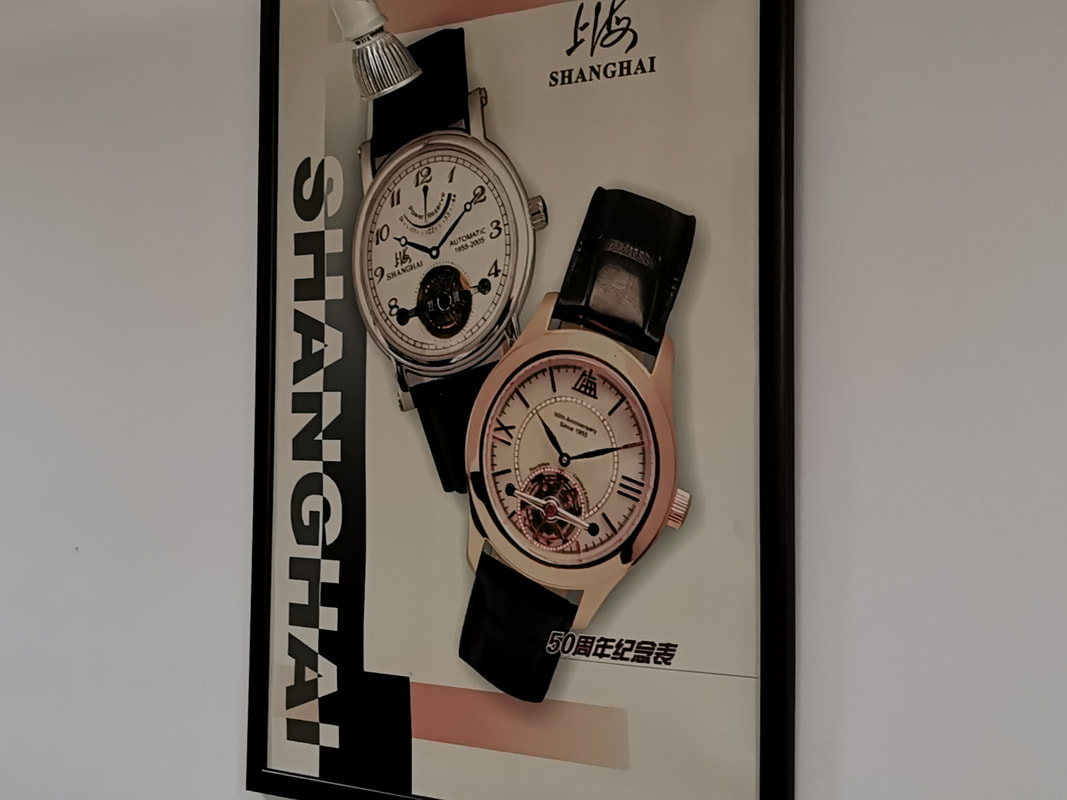 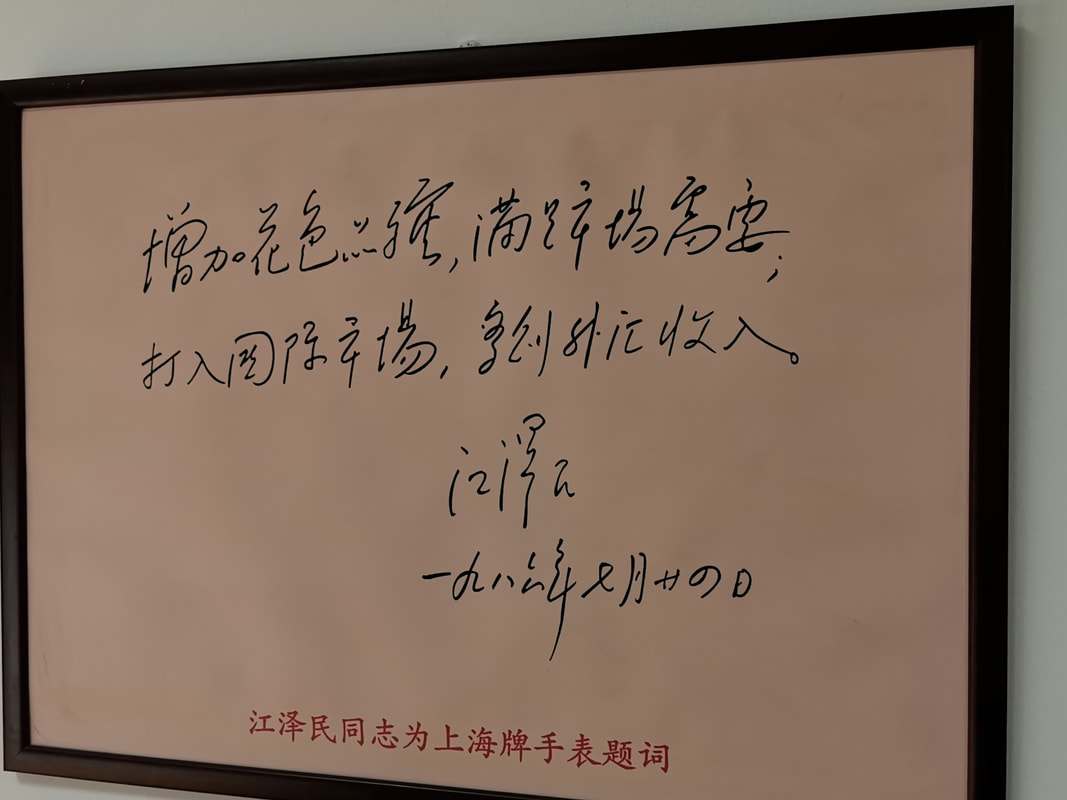 Now, here's some photos of outside, the last of which is the front of the factory,which I'll follow with some information. 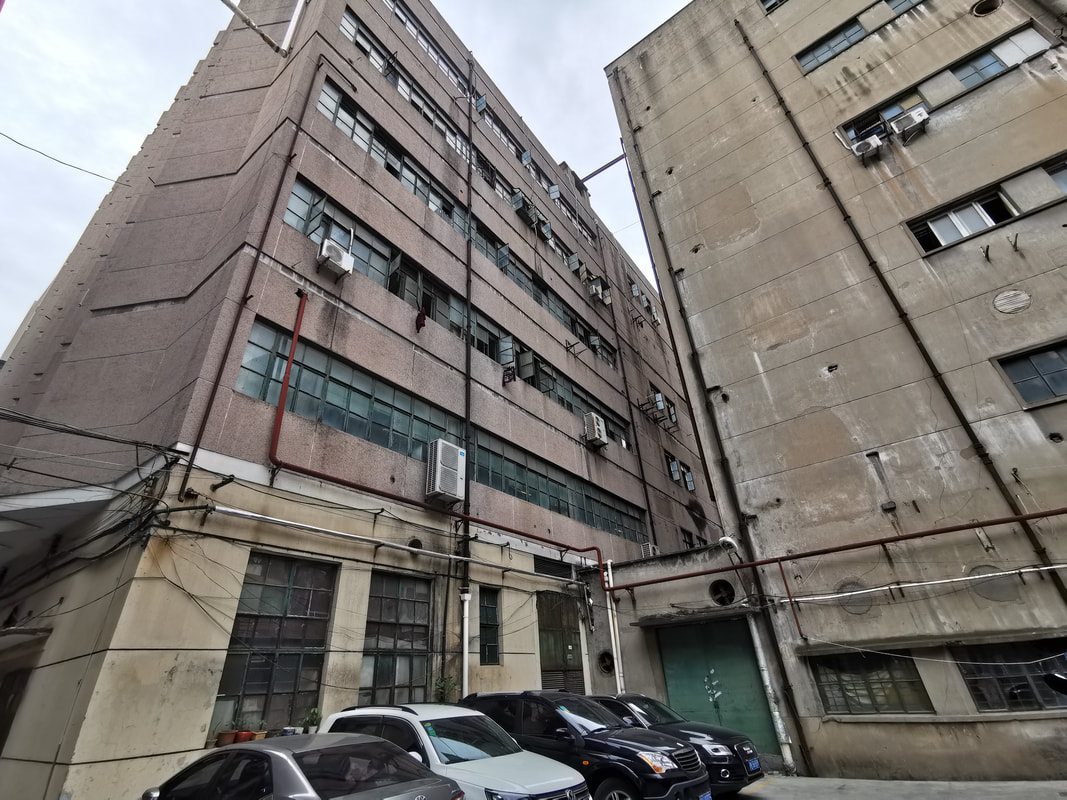 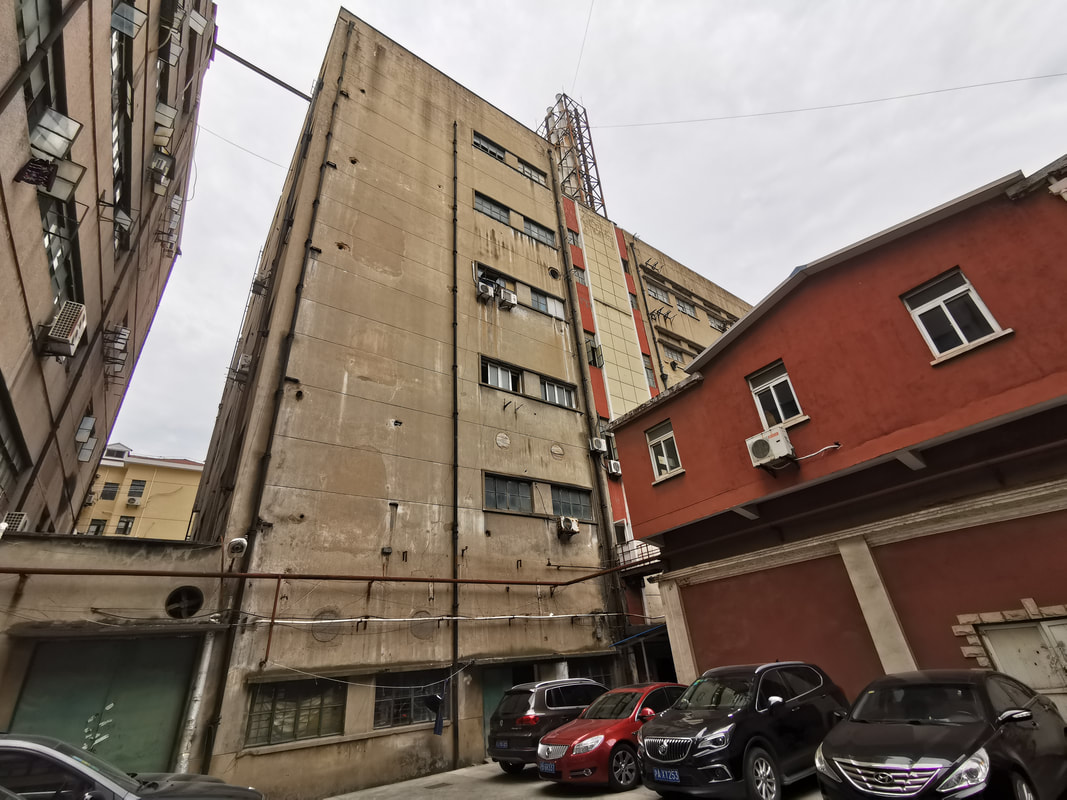 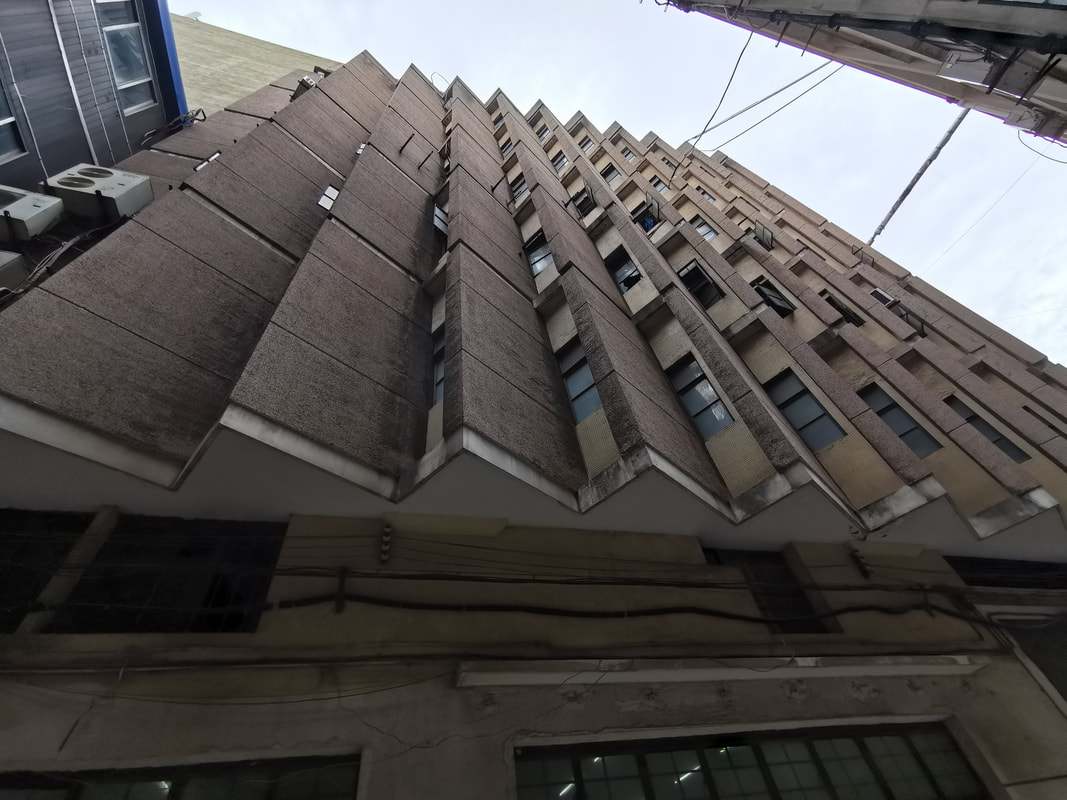 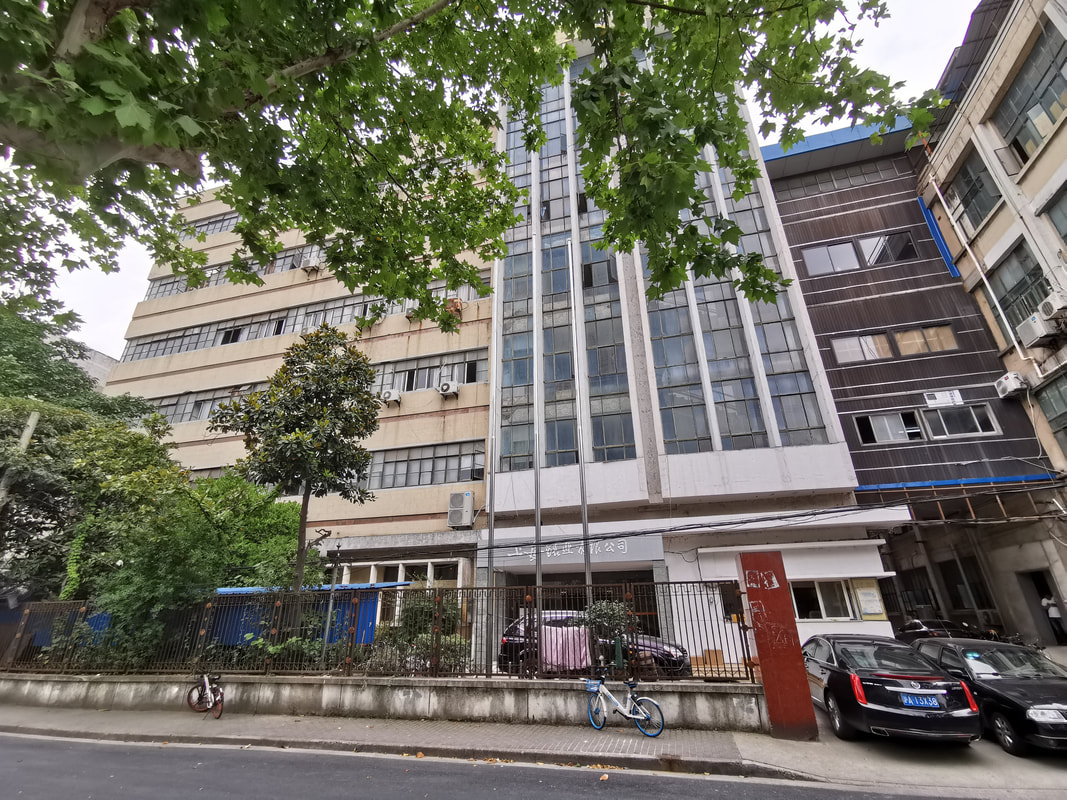 Now, it's clear the factory has seen better days, but Mr. Cai explained to us--and showed us some in-progress areas inside which we didn't photograph--that the factory is undergoing a quite full inside, then outside, renovation, which is expected to be (so far as David and I both understood) completed some time next year.

That means that this is probably my best and only--and maybe most westerner's best and only--chance to still see the factory with the patina of it's entire past history intact. It will be much more modern next year, if my experience at other factories is any indication.

After the tour, Mr. Cai, and David and I warmly exchanged parting greetings, and Mr. Cai and I both expressed our hopes to see each other again at the China Watch and Clock Fair, which starts three days from now, on June 20th, in scenic Shenzhen. I'm looking forward to seeing Mr. Cai again, grateful for David for his assistance, and totally overwhelmed at our good fortune.
Curator: Alberta Museum of Chinese Horology in Peace River

That's is some kind of awesome. Possibly the first and only Westerner to ever get that chance. You are quite the ambassador!

Look forward to all your photos and updates.

Stay safe and have fun.
My best friend from college shared his secret to his huge financial success, "I fell out of the right vagina."

BL, I think it's more that luck smiled on us than my skills as an Ambassador, but I do know my CHA membership still surprises Chinese watch people at times

and it does give me some credibility when I ask things.

Was sure a fun afternoon!!

CHA is the China Horologe Association, the governing body for watch and clock production in China. I was made it's first non-Chinese member in 2014. 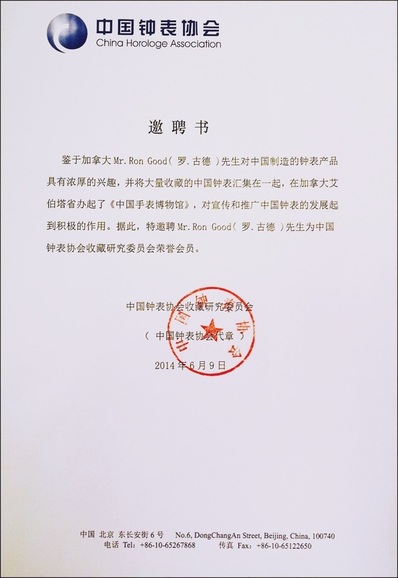 AT, you're something of a trail blazer in the arena of Chinese time pieces..keep up the good work, and thanx for sharing your exploits w/ us...

Cool - thanks for sharing!

I want to note that it was the kindness of Shanghai WF that ultimately made this possible. I appreciate that they understood, at least after speaking to whomever, my sincerity and appreciation for their industry. Sure, I'll take credit for my part--but I couldn't do what I do without receiving what I just described. After they did their due diligence, they were as friendly and accommodating as anyone could ask. We had lots of laughs, actually

And: thanks to everyone for your comments. Love sharing this with you folks!
Curator: Alberta Museum of Chinese Horology in Peace River

What a privilege! Thank you for sharing.

I feel luckier than I could ever imagine.

I feel luckier than I could ever imagine.

And we are lucky to have you here. Thanks Ron.