I leave May 27 and arrive May 28 in Beijing to meet up with Li Wei of the China Horologe Association, then...

Here's a few photos of Fenghuang (I'll take my own when I get there)... 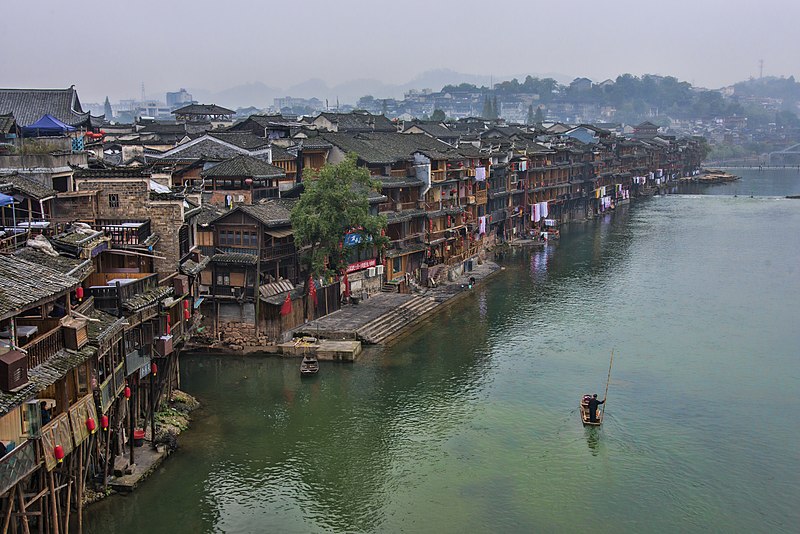 Evidently it gets lit up all purty at night...

I have valued friends everywhere else I'm visiting in China, now that I have a few visits behind me, but my days in Fenghuang, and my time between Guilin and Yangshuo, are pure relaxed solo tourist time.

I've been to Guilin and Yangshuo before but, for example, I only had a single afternoon in Yangshuo and as soon as I got there I knew I was at the very least a day or two short of what it deserved.

And Fenghuang...I mean: just look at the place. It's old, it's a "water town", lots of it is on stilts, there's a bunch of bridges (some of them just pylons to step on), and I have a very decent room right on the river for five nights for just over $200 total

As soon as I saw the photos I knew I had to go.

I'll keep you all posted as I travel, but I am so excited now that it's close I can almost taste the Chuan'er, Tofu Nao and Er Guo Tou.
Curator: Alberta Museum of Chinese Horology in Peace River

Quite an itinerary!!..have a lot of fun, bring back some interesting souvenirs, and be safe..

Have a safe trip AT! Looking forward to the pics and writeup.

Awesome! Hope you have a blast!

If I win our bet while you're there (WAPO filed for dismissal AIR 4/7 and MAGA Boy Inc is dragging their feet for responding, but may have done so recently) you could send my watch from right at one of the cool manufactures or folks you visit with a pic of you and them and the watch and maybe a plaque or one of those exquisitely cool calligraphy certificates they hand make over there to commemorate the occasion, or something.

I shall look forward as always to the travelogues.

Fenghuang looks like an amazing place. Enjoy your trip and be safe.

Will be a busy and exciting trip! Look forward to your travel takes.
My best friend from college shared his secret to his huge financial success, "I fell out of the right vagina."

Thanks everyone! I seriously wish y'all could join me.

(3F, it would almost be worth losing to see that happen

"That stone buddha deserves all the birdshit it gets. I wave my skinny arms like a tall flower in the wind." Ikkyu
Post Reply
9 posts • Page 1 of 1