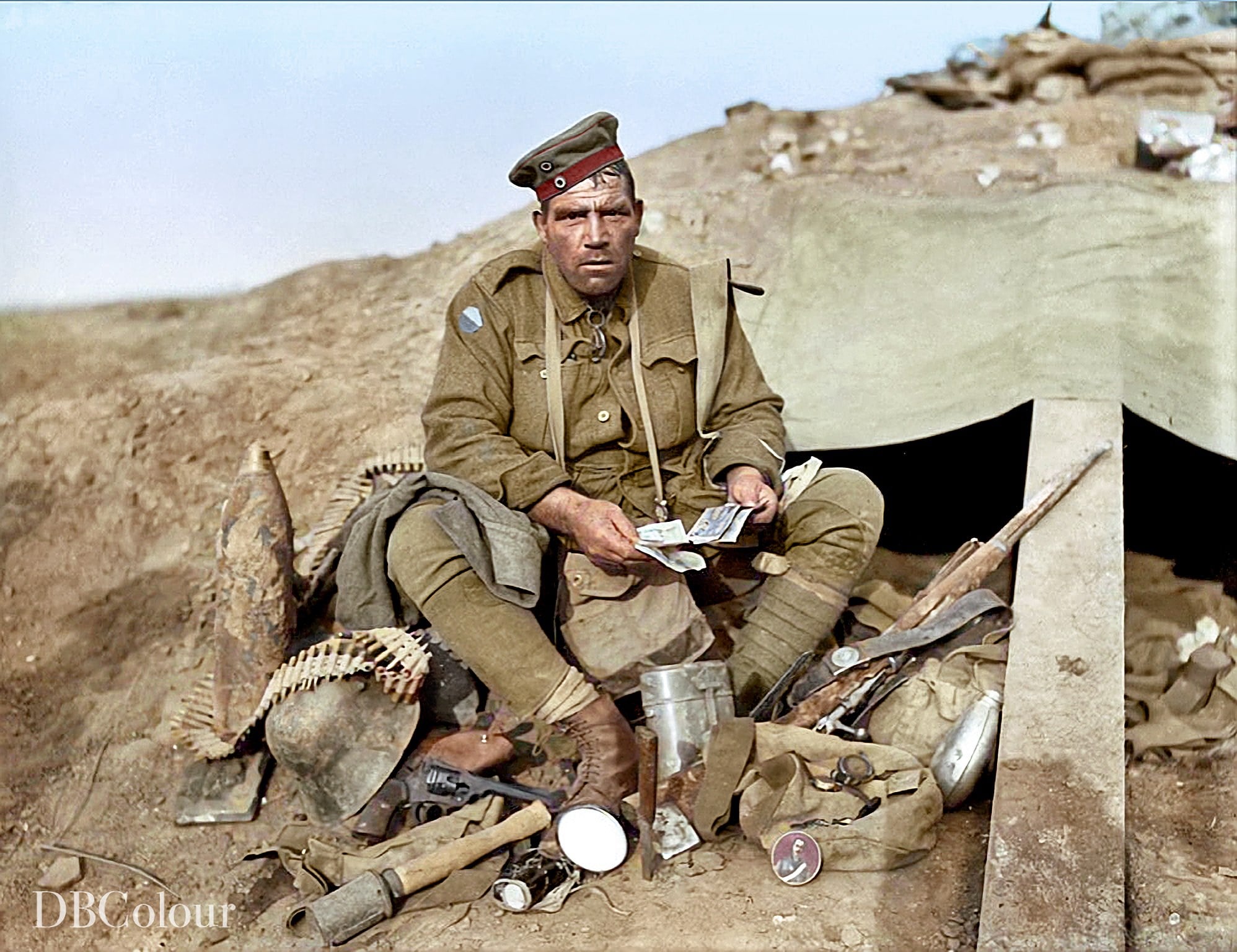 'Barney' Hines was also a kleptomaniac who became known in the trenches as the "Souvenir King". But he was one of the bravest soldiers at the front and would have been decorated many times had it not been for his lack of military discipline.

He earned his nickname because of his incurable habit of hijacking medals, badges, rifles, helmets and watches from the bodies of the German dead - and, in some cases, of those he captured.

He brought the Kaiser's wrath down upon his head when a photographer took a picture of him on September 27,1917, showing him surrounded by some of his loot after the Third Battle of Ypres.

Prints were circulated among the Diggers and inevitably some fell into the
hands of German soldiers - from whence they made their way to the infuriated Kaiser.

Born in Liverpool, England, in 1873, Barney Hines was always a rebel. Of
Irish descent, he ran away to enlist in the army at the age of 14 but was
dragged home by his mother.

Two years later he joined the Royal Navy and saw action during the Boxer
Rebellion when he served on a gunboat chasing pirates in the China Sea.
Discharged the following year, he went gold seeking around the world and was in South Africa when the Boer War broke out. He served throughout it as a scout with various British units.

His lust for gold continued and he searched for it in the US, South America and New Zealand. But he was working in a sawmill in Australia when World War I broke out in August 1914.

Despite being in his early 40s, he immediately tried to enlist but was turned down on medical grounds. Undeterred, he haunted recruiting centres until he was accepted to serve in France in 1916 as part of a reinforcement for the 45th Battalion.

And, once in France, the legend of this huge, powerful man who never showed fear, began.

He generally disdained conventional weapons such as his .303 rifle, preferring to go into action with two sandbags packed with Mills bombs.

His commanding officer had a brain wave and gave him a Lewis gun, which was an immediate success. Hines was entranced by its spraying effect and announced in his broad Liverpudlian accent: "This thing'll do me. You can hose the bastards down."

Another nickname he earned was Wild Eyes and at a later date the commanding officer was heard to say: "I always felt secure when Wild Eyes was about. He was a tower of strength in the line- I don't think he knew what fear was and he naturally inspired confidence in officers and men."

One of Hines' pastimes was prowling around collecting prisoners and loot with enthusiasm.

On one occasion, annoyed at the sniper fire from a German pill-box, he ran straight at it, leapt on it's roof and preformed a war dance while taunting the Germans to come out. When they failed to comply, Hines lobbed a couple of Mills bombs through the gun port. A few minutes later the 63 Germans who had survived staggered out with their hands above their heads. Hines collected his "souvenirs" before herding his prisoners back to the Australian lines.

Another time he came across a battered German dressing station. Creeping in,he found the surgeon standing over the operating table and, on tapping him on the shoulder, Hines was amazed to watch him topple over - dead from a shell splinter in the heart. Only one man had survived - ironically a wounded Tommy who was on a stretcher on the floor out of the blast. Picking the man up as if he were an infant, Hines carried him towards safety but he died before reaching allied lines. Hines lowered him gently to the ground -then returned to the loot in the dressing room.

His booty wasn't confined to portable keepsakes. At Villers-Bretonneux he liberated a piano which he managed to keep for several days until he was persuaded to give it away.

On another occasion he scored a grandfather clock which he carried back to the trenches. But, after its hourly chimes were found to attract German fire, his mates blew it up with - what else? - a Mills bomb.

In Armentieres he came across a keg of Bass which he started to roll towards the battalion. He was stopped by military police and told not to go any further with it. Unfazed, Hines left the keg and went ahead to round up fellow Diggers who returned to drink it on the spot.

When the AIF reached Amiens they found the beautiful cathedral city deserted. It was too much for Hines. He disappeared and was finally sprung by British military police in the vaults of the Bank of France where he had already squirrelled away millions of francs, packed neatly in suitcases.

He was hauled off for questioning by the British who, nonplussed on what to do with the reprobate, returned him to his unit. Later he was to boast that the escapade had cost him no more than 14 days' pay and that he had been allowed to keep the banknotes he had stuffed into his pockets.

But for all his incorrigibility, he was an outstanding, if unpredictable soldier who managed to capture 10 German soldiers single-handed.

There were some near misses, too. At Passchendale he was the only survivor of a direct hit on the Lewis gun nest. Blasted 20ms. and with the soles of his boots blown off, he crawled back, got the gun working and continued firing until he fainted from wounds in his legs.

Hines was also renowned for the party he held at Villers-Bretonneux after he found a cache of 1870 champagne and tinned delicacies. His mates were all decked out in top hats and dress suits which he had also acquired.

It was to be his last party for some time. Just after it ended he scored a bullet wound over his eye, another in his leg and a whiff of gas. Despite protests, he was hospitalised at Etaples, being almost blinded.

A few nights later the Germans bombed the hospital, causing 3000 casualties. Hines hauled himself out of bed, found a broom which he used as a crutch and spent all night carrying the wounded and dying to safety.

After that he was invalided home and, in the ensuing years, despite his wounds, he worked as a drover, shearer, prospector and timber cutter.

He volunteered for World War II and, when he was turned down - he was now in his 60s - he stowed away on a troop ship. He was caught before the vessel got through the Heads and put ashore.