You wouldn't know it to look at him, but the little old man in the center of this photo was one of the toughest Jarheads ever.

In 1942 when he was only 14, Jacklyn "Jack" Lucas enlisted in the Marine Corps after convincing the recruiter he was 17.

Posted to a depot unit at Pearl Harbor, Jack was bored and wanted action, so in January of 1945, he rolled up a combat uniform under his arm, sneaked out of camp, and stowed away aboard a Naval Transport that was taking 1st Battalion, 26th Marines, 5th Marine Division to Iwo Jima.

Not knowing what to do with him, the Marine battalion commander busted Jack one rank, then assigned him as rifleman to C Company. A few days later, Jack turned 17.*

The day after landing on Iwo Jima, Jack dove on top of one Japanese grenade then pulled another beneath him. The blast ripped through his body, but saved his comrades.

It took 21 surgeries to save him, and for the rest of his life carried in his body more than 200 large pieces of shrapnel.

On October 5th, 1945, Jack Lucas received the Medal of Honor from President Harry Truman in a ceremony on the White House lawn. He is the youngest Marine ever to receive the nation's highest honor.

He then returned to high school.... as a freshman.

After college, Jack entered the Army as a Captain in the 82nd Airborne, and survived a training jump in which neither his main chute nor his reserve chute opened.

Two years before he died in 2008, Jack was honored by the Commandant of the Marine Corps, General Michael W. Hagee, who presented him with a Medal of Honor ceremonial flag at the Marine Barracks in Washington, D.C.
It was during that ceremony that this photo was taken.
Semper Fidelis. 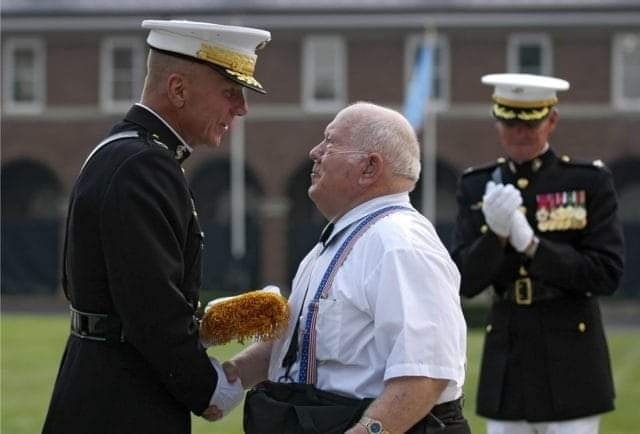 Re: One tough Jarhead - Semper Fi