The aircraft carrier is the symbol of American power – 90,000 tons of diplomacy, the Navy likes to say. Almost all of them are named after presidents – until Acting Secretary of the Navy Thomas Modly broke with tradition.

"Exactly right, and I like it when you put it that way," said Modly.

That's Miller as in Dorie Miller. The next aircraft carrier to be built will be named for the grandson of slaves and a son of sharecroppers. The official announcement is on Monday, Martin Luther King Jr.'s birthday, at Pearl Harbor.

A long overdue honor for a very brave man.

Nice. Every time the carrier is in the news, people will hear the name and want to know who Dorie Miller was.

Besides, they were running out of good names from the list of presidents. :-)

Read about his actions...one hell of a guy
"Old age and treachery will always beat youth and exuberance"

Love!
My best friend from college shared his secret to his huge financial success, "I fell out of the right vagina." 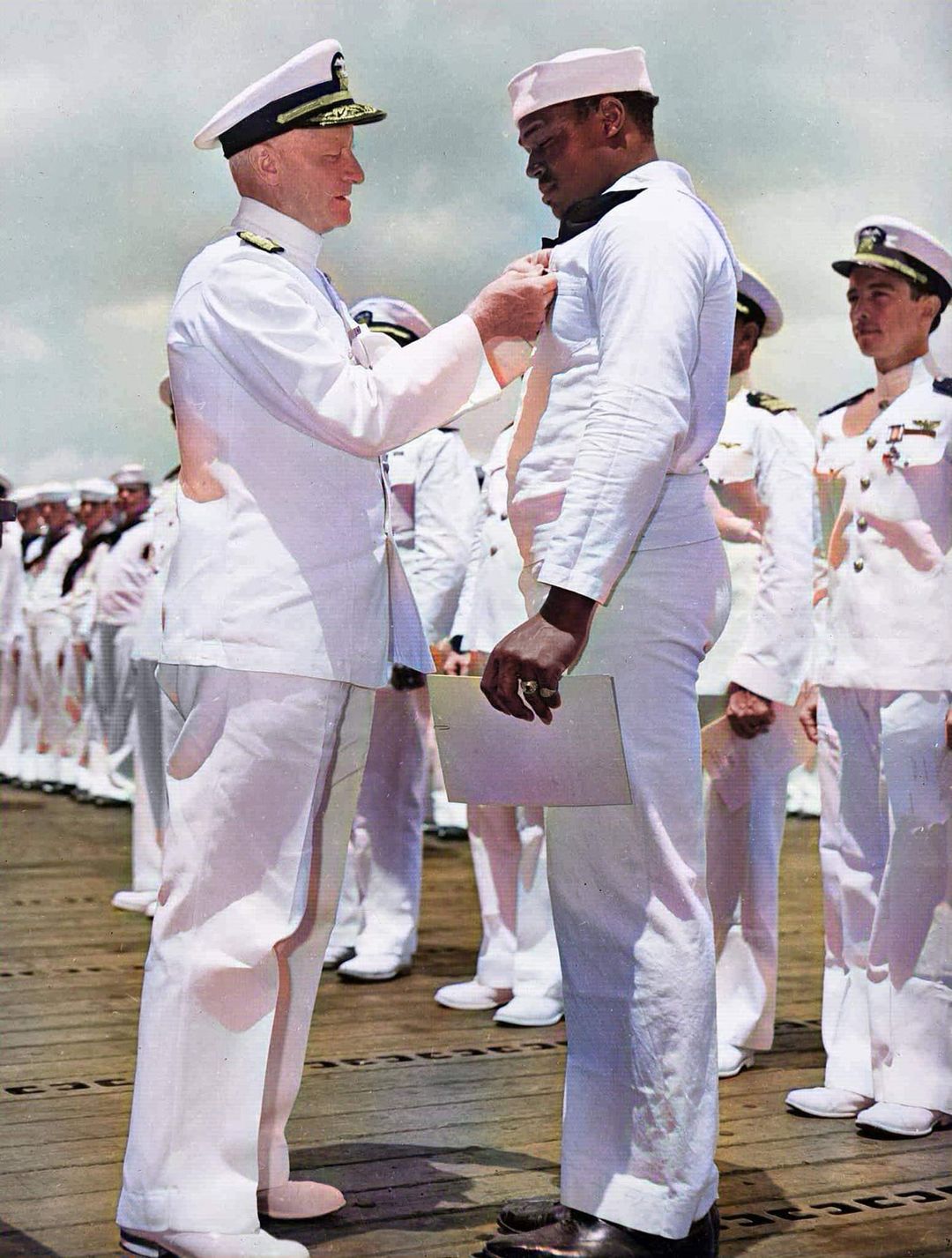 Admiral Chester Nimitz, the Commander in Chief, Pacific Fleet, pins Navy Cross on Doris "Dorie" Miller, at ceremony on board the USS Enterprise on May 27, 1942.


It has been 80 years since Doris “Dorie” Miller, a black mess attendant, grabbed control of a machine gun he had never been allowed to use so he could help defend the USS West Virginia during the Pearl Harbor attack.
In the decades since, Miller has become one of the best-known black heroes of World War II. As the war continued, Miller was depicted on a poster used to sell war bonds and recruit black soldiers. His acts of heroism were portrayed by Cuba Gooding Jr. in the movie Pearl Harbor. And his story is featured prominently in the newly opened National Museum of African American History and Culture.

But for all of the recognition the Waco native has earned, one honor is missing: Miller, who died in combat in 1943, never received the Medal of Honor. And for decades, Rep. Eddie Bernice Johnson, D-Dallas, has been fighting to change that.

“I have lobbied the Department of the Navy about as much as I know how to lobby them,” Johnson said. “I’ve been working on it ever since I’ve been here, and I don’t know that I am any closer.”
Johnson’s efforts to honor Miller began decades ago, when she was a young girl. At 7 years old, she went door to door in her Waco neighborhood, the same one Miller had grown up in, to raise funds so the community could honor him.

She and her father ultimately helped raise enough money to buy Miller a silver identification bracelet, on which Miller’s name was engraved.

“I remember him coming home after Pearl Harbor,” Johnson said. “He was a real hero. He continues to be a real hero.”

Before the Japanese attacked Pearl Harbor on Dec. 7, 1941, Miller was banned from serving in combat because he was black. Instead, he worked in the cafeteria. But when the bombs dropped on his ship, Miller ran to the deck, helped move the ship’s injured captain out of harm’s way, and started firing on warplanes, according to military records.

In 1942, Miller was awarded the Navy Cross, the Navy’s second-highest honor, for his courage. But Johnson, who was recently elected to her 13th term in Congress, believes he’s deserving of the top honor.
In order for a serviceman to be awarded the Medal of Honor more than three years after the act of heroism in question, the secretary of the Navy must personally recommend the serviceman’s case be reopened. From that point on, it’s up to Congress and the president.

Despite Johnson’s best efforts, and the efforts of the many scholars, city councils, and student groups she has recruited, the secretary of the Navy, Ray Mabus, has not budged.

Last year, a Navy spokesman said that two studies into Miller's case, in 1988 and 1996, revealed no evidence of racial discrimination and found that Miller did not deserve the top honor.

“I disagree, along with about a million other people we’ve heard from,” Johnson said.
Navy spokesmen did not return requests for comment.

Johnson’s campaign for Miller has spread far beyond Waco. William Guzmán, an assistant professor of history and African-American studies at Florida A&M University, has eagerly campaigned on Miller’s behalf. Each year, he gathers hundreds of letters to send to President Barack Obama, asking for intervention on the case.

Guzmán said the Navy studies do not take into account the specific barriers Miller had to overcome to perform his acts of courage in the first place.

“He wasn’t even allowed to have access to the weaponry, because the Navy sincerely believed that African-Americans were intellectually inferior, that they were cowards,” Guzmán said. “And when you consider that he was still able to save some of his fellow comrades from death, that speaks volumes.”

“The history of African-American military service in this country is a history that shows blacks have constantly needed to re-prove themselves as worthy,” Guzmán said. “There’s this constant doubt that blacks are loyal to the country, and we have had to prove that we are loyal, faithful citizens worthy of the benefits and fruits of citizenship.”
That complex narrative is reflected in an exhibit on black soldiers in the new National Museum of African American History and Culture, which opened this year on the National Mall.

Lt. Col. Krewasky Salter, the curator of the exhibit, said the extent to which black Americans contributed to America’s efforts in World War II — and every other U.S. conflict — is gradually being recognized.
“African-Americans are slowly getting recognition for their service in World War II,” Salter said. “So much was accomplished that was never published in mainstream history.”

Although Johnson doesn’t know if Miller will ever receive the recognition she is certain he deserves, Salter said more Americans than ever are learning his story at the museum.

“Dorie Miller has a permanent place here,” he said. “He’s helping tell the American story through an African-American lens.”


The new SecNav may be more receptive to upgrading the Navy Cross but regardless, Doris “Dorie” Miller is an American Hero.

It is getting closer to December 7th, so in honor of some of the men and women who served I will be posting stories as I run across them about some of those who helped fight the war.Most are gone now since it has been 80 years or so since America entered the war.

Doris Miller, known as Dorie to his friends and shipmates, was a U.S. Navy sailor who wanted to travel the world and support his family. But because he was black, he was forced to work in the kitchen as a ship’s cook, third class — until fate interceded.

When the Japanese attacked Pearl Harbor, Doris Miller snapped into action and distinguished himself in combat — a role his white superiors never thought he was cut out for. He manned a machine gun amid the chaos and even tended to the wounds of the very soldiers who’d been part of a system that had been keeping him down ever since he first enlisted.

But in the end, Doris Miller not only earned the respect he deserved, he helped launch a wider push for racial equality in America — even if he never lived to see it come to fruition.


USS Doris Miller (CVN-81) is a future Gerald R. Ford-class aircraft carrier of the United States Navy.Doris Miller is scheduled to be laid down January 2026, launched October 2029 and commissioned in 2032. She will be built at Newport News Shipbuilding, a division of Huntington Ingalls Industries (formerly Northrop Grumman Shipbuilding) in Newport News, Virginia.

The rendering below is of the USS Enterprise (CVN-80) due to join the fleet in 2025. The USS Dorie Miller will be virtually identical. 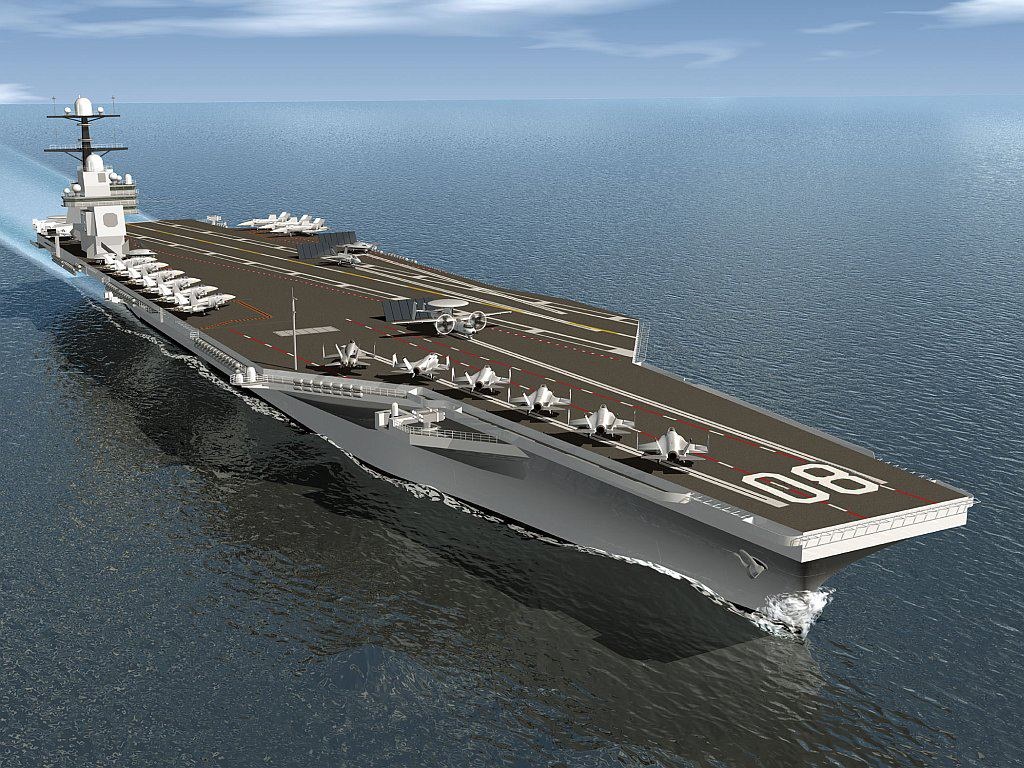