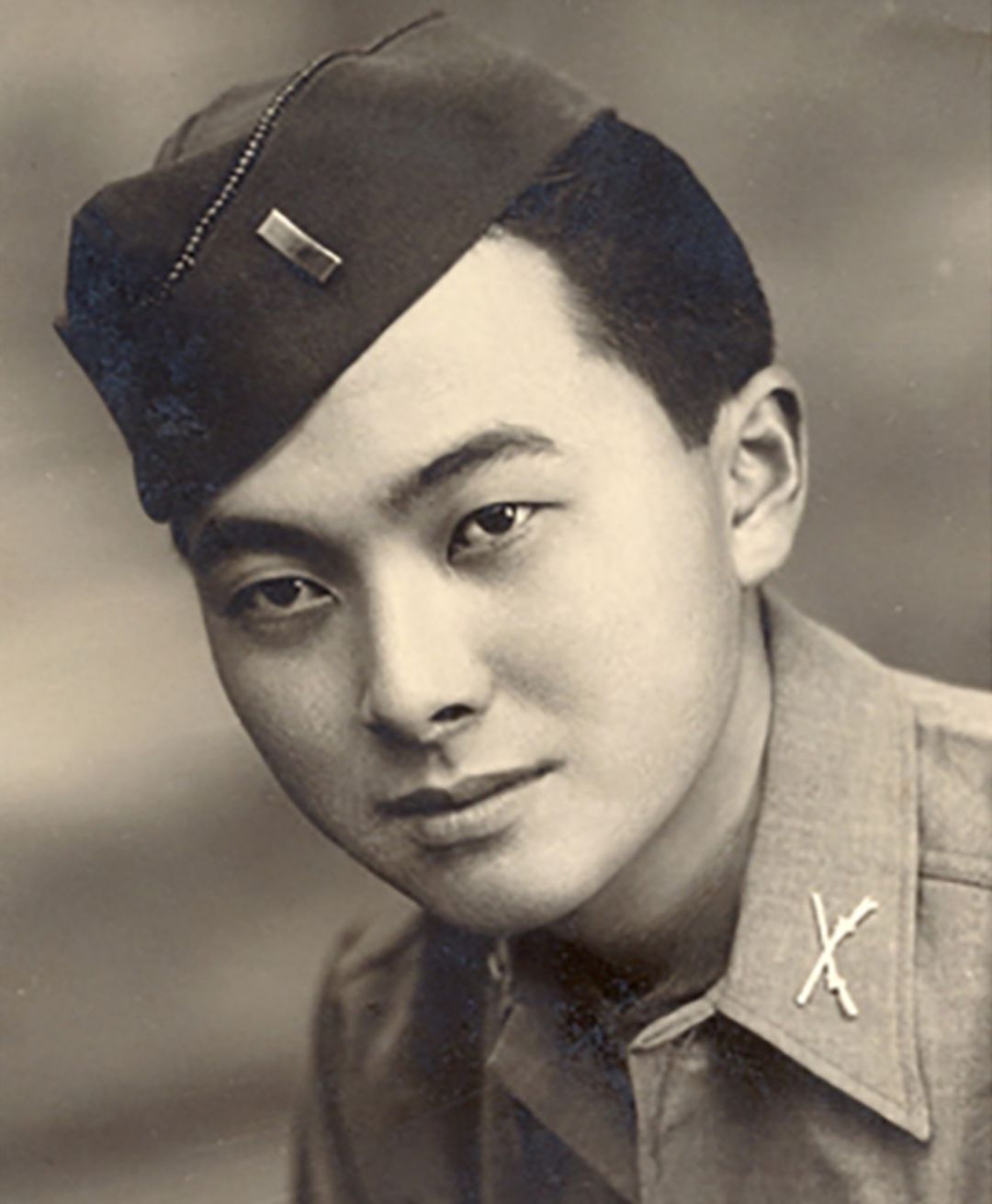 "When Daniel Inouye heard the announcement of the formation of several segregated Japanese American battalions in the US Army he immediately quit his pre-med studies at the University of Hawaii and enlisted. Daniel was assigned to Company E in the 2nd Battalion of the 442nd Regimental Combat Team."

"Inouye was promoted to Sergeant within his first year, and he was assigned as a platoon sergeant. He served in Italy in 1944 during the Rome-Arno before his regiment was transferred to the Vosges Mountains region of France."
"Inouye and the 442nd proved their unbridled valor in the Vosges Mountains when they were ordered to find and rescue a lost battalion of 400 infantry cut off and surrounded by German forces. In five days of battle in the fall of 1944, the 442nd broke through German defenses and rescued 211 men. The 442nd suffered over 800 casualties. I Company went in with 185 men; eight walked out unhurt. K Company began with 186 men; 17 walked out."

"As a result of his courage Sergeant Inouye with given a battlefield commission to Second Lieutenant. At one point while he was leading an attack, a German round struck him in the chest directly above his heart, but the bullet was stopped by the two silver dollars he happened to have stacked in his shirt pocket. He continued to carry the coins throughout the war in his shirt pocket as good luck charms. Three members of the 442nd, Barney Hajiro, James Okubo, and George Sakato were awarded the Medal of Honor for their participation in the rescue."

"In early 1945 Lieutenant Inouye and the 442nd redeployed to the Gothic Line. On April 21, 1945 Lieutenant Inouye was leading a flanking attack on a heavily-defended ridge near San Terenzo in Tuscany, Italy. The American platoon was in turn flanked in a surprise ambush by three MG-34 machine guns at relatively close range. Inouye’s platoon of 30 men was in for a fierce fight. He stood up to look for the best avenue for cover when he was shot in the stomach. Ignoring his wound, he proceeded to attack and destroy the first machine gun nest with hand grenades and his Thompson submachine gun. When informed of the severity of his wound, he refused treatment and rallied his men for an attack on the second machine gun position, which he successfully destroyed before collapsing from blood loss. As his squad distracted the third machine gunner, Inouye crawled toward the final bunker, coming within 10 yards. As he raised himself up and cocked his arm to throw his last grenade, a German soldier inside the bunker fired a rifle grenade, which struck his right elbow."

"While the German inside the bunker reloaded his rifle, Inouye pried the live grenade from his useless right hand and transferred it to his left. As the enemy soldier aimed his rifle at him, Inouye tossed the grenade into the bunker and destroyed it. He stumbled to his feet and continued forward, silencing the last German resistance with a one-handed burst from his Thompson before being wounded in the leg and tumbling unconscious to the bottom of the ridge. He awoke to see the worried men of his platoon hovering over him. His only comment before being carried away was to order them back to their positions, saying "nobody called off the war!"

"Although Inouye had lost his right arm, he remained in the military until 1947 and was honorably discharged with the rank of Captain. At the time of his leaving the Army, he was a recipient of the Bronze Star and Purple Heart. Inouye was initially awarded the Distinguished Service Cross for his bravery in this action, with the award later being upgraded to the Medal of Honor by President Bill Clinton (alongside 19 other Nisei servicemen who served in the 442nd)."

"While recovering at Percy Jones Army Hospital in Battle Creek, Michigan; he met and became friends with another recovering severely wounded young officer – Bob Dole. The two became friends that lasted through their terms in the United States Senate and up to Inouye’s death in 2012. The Percy Jones complex of federal buildings, no longer a hospital, is now named Hart-Dole-Inouye Federal Center in honor of three patients who became United States Senators." (nps.gov)

"When Inouye returned home to Honolulu, he enrolled at the University of Hawaii under the provisions of the GI Bill and obtained a bachelor’s degree in government and economics. He married Margaret Shinobu Awamura in 1949 and received his law degree from George Washington Law School in 1952. Inouye became active in Hawaiian politics, and when the territory received statehood in 1959, he was elected to serve as one of Hawaii’s first delegates to the US House of Representatives. He went on to win election to the US Senate in 1962 and served a total of 53 years in the House and Senate. He never lost an election during his entire political career. He was known for his energetic advocacy of his home state, his bipartisanship, and his commitment to fighting discrimination. Inouye was the first Japanese American to serve in Congress, and, as President pro tempore of the United States Senate from 2010 to 2012." Daniel Inouye passed away on December 17, 2012 at the age of 88. Lest We Forget.


Original description and photo sourced by the following: www.nps.gov, US Army Archive and www.nationalww2museum.org.

If you haven’t seen the Ken burns “the war” documentary, he tells his story in detail. One of the better documentaries I’ve seen
Post Reply
2 posts • Page 1 of 1