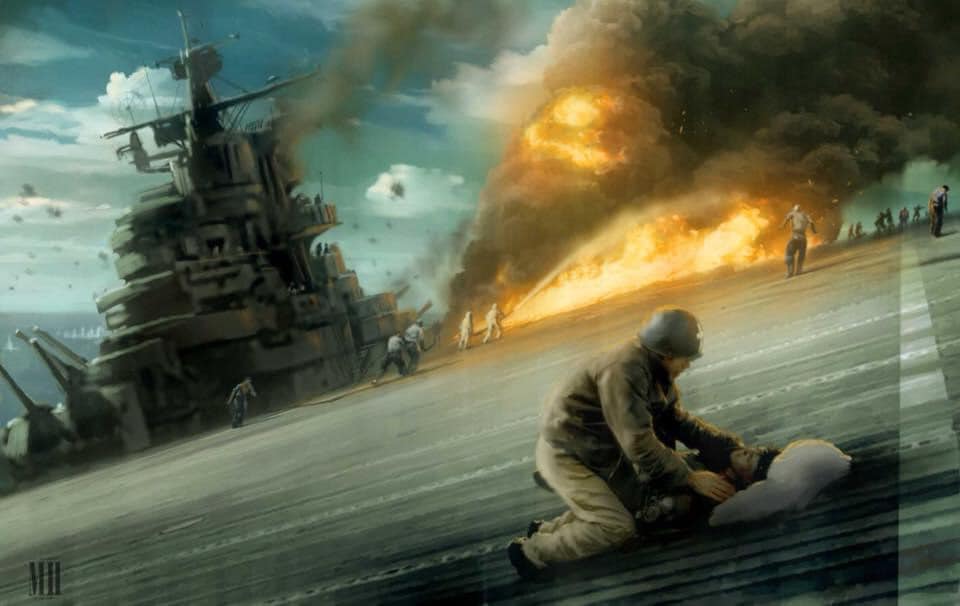 “He was the bravest man I ever knew...His courage was sustained, tested by time, enduring, faithful to the end” — The Captain of the USS Franklin about Father Joseph O’Callahan, the ship’s Roman Catholic chaplain.

March 1945, the aircraft carrier USS Franklin is within 50 miles of the Japanese mainland. Diving out of the low cloud cover, a single Japanese dive bomber drops two semi-armor piercing bombs (probably 250 kg), both piercing the flight deck and exploding within the ship. The explosions set off a chain reaction exploding fully fueled and loaded aircraft, both on the flight deck and below — massive fires engulf the ship. Some 800 sailors will die.

In this inferno, the ship’s Chaplain, Lieutenant Commander O’Callahan will earn the Medal of Honor, risking his life countless times. The Medal of Honor Citation below, while describing what he did, doesn’t really describe what happened. His acts of selflessness, and those of all the crew, are too numerous to count.

One that stands out: Ordnance Officers, try to defuse loose ordnance on the deck of the ship as fires rage around them. Understandably nervous, these officers fumble with their task, potentially leading to more destruction and loss of life. With complete disregard for the dangers around him, Father O’Callahan approaches these men, getting as close to the bombs as he can. He doesn’t say a word, he just stands there, sharing the danger. His presence is calming — the crew begin to think that if this crazy Chaplain trusts us to defuse these bombs, maybe we really can. They are successful and defuse the ordnance, averting one of the many tragedies of that day.

For conspicuous gallantry and intrepidity at the risk of his life above and beyond the call of duty while serving as chaplain on board the U.S.S. Franklin when that vessel was fiercely attacked by enemy Japanese aircraft during offensive operations near Kobe, Japan, on 19 March 1945. A valiant and forceful leader, calmly braving the perilous barriers of flame and twisted metal to aid his men and his ship, Lt. Comdr. O'Callahan groped his way through smoke-filled corridors to the open flight deck and into the midst of violently exploding bombs, shells, rockets, and other armament. With the ship rocked by incessant explosions, with debris and fragments raining down and fires raging in ever-increasing fury, he ministered to the wounded and dying, comforting and encouraging men of all faiths; he organized and led firefighting crews into the blazing inferno on the flight deck; he directed the jettisoning of live ammunition and the flooding of the magazine; he manned a hose to cool hot, armed bombs rolling dangerously on the listing deck, continuing his efforts, despite searing, suffocating smoke which forced men to fall back gasping and imperiled others who replaced them. Serving with courage, fortitude, and deep spiritual strength, Lt. Cmdr. O'Callahan inspired the gallant officers and men of the Franklin to fight heroically and with profound faith in the face of almost certain death and to return their stricken ship to port.