Well, it has become something of a thang in recent years to collect heritage inspired dive watches. Watch makers have capitalized upon this theme w/ new releases, which allows them to make $ and for enthusiasts to participate w/o paying sky-high prices for the originals, or their repairs. In recent years, I've played my part by acquiring a couple of Evant Tropical Divers(inspired by a 60's era Breguet) and a Steinhart OVM 39(inspired as well by a 60's era Rolex Sub). Most recently, I've picked up an Oris Divers 65 Bronze Bezel(inspired by their 1965 diver), which I've truly enjoyed wearing the past several months. I thought it might be interesting to make some informal comparisons of this watch to the warmly received Tudor Black Bay 58 that I rec'd earlier this a.m.

As most of us know by now, the Tudor Black Bay 58 took Baselworld 2018 by storm. Reviewers, bloggers, and WISs were delighted to see a 39mm diver modeled so closely after the original 36mm Tudor Submarine introduced in 1958. Because of its' 39mm SS case width and 11.9mm thickness, its' proven to be comfortable to wear on all kinds of wrist sizes and to slip nicely under shirtsleeve cuffs. Credit for this more manageable size has been attributed to the new Tudor MT5402 movement. It features a 70 hr. power reserve, a silicon hairspring, and a bi-directional rotor. It is also a COSC-certified chronometer. Here are a few pics of mine(previously loved).. 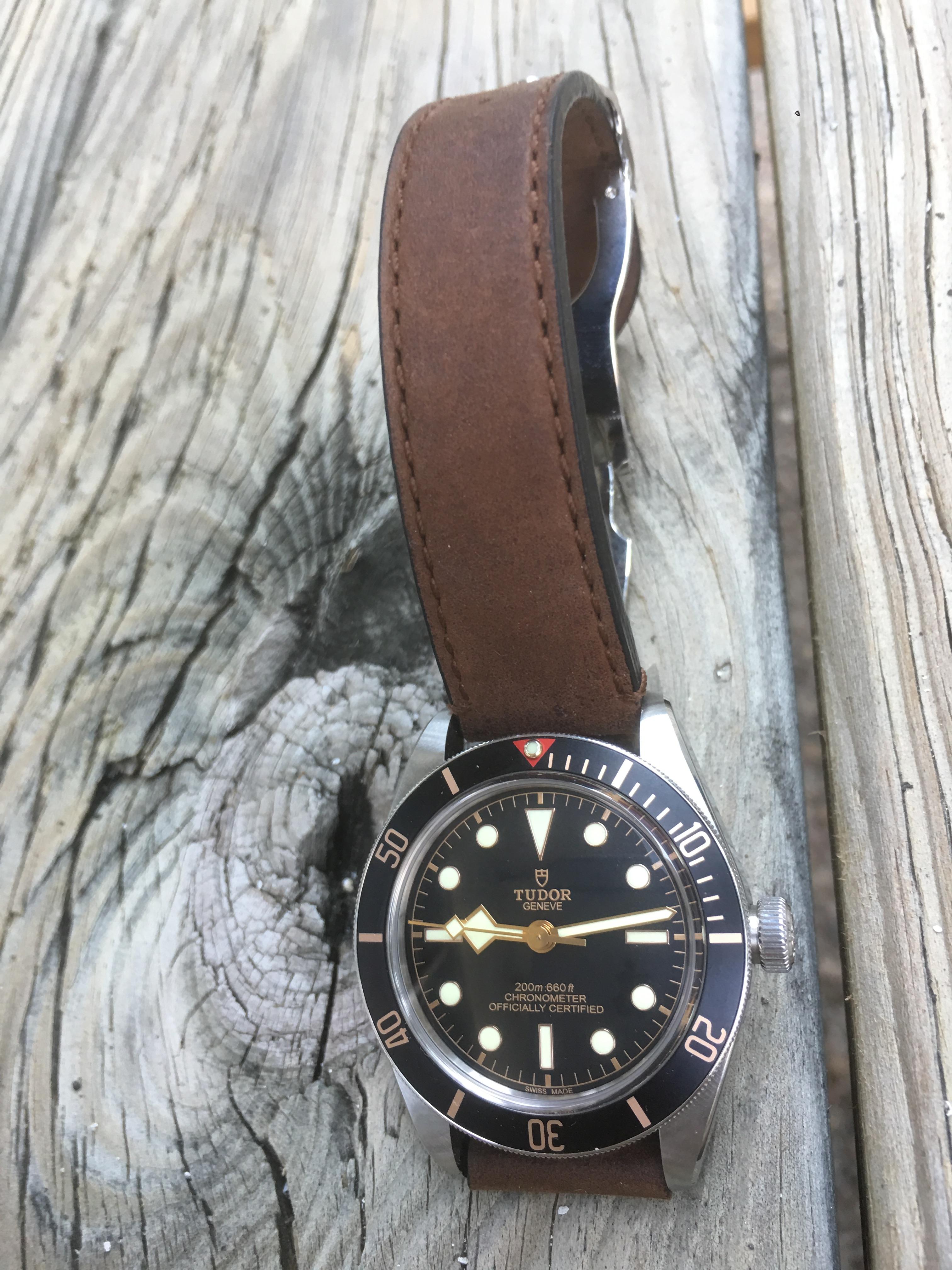 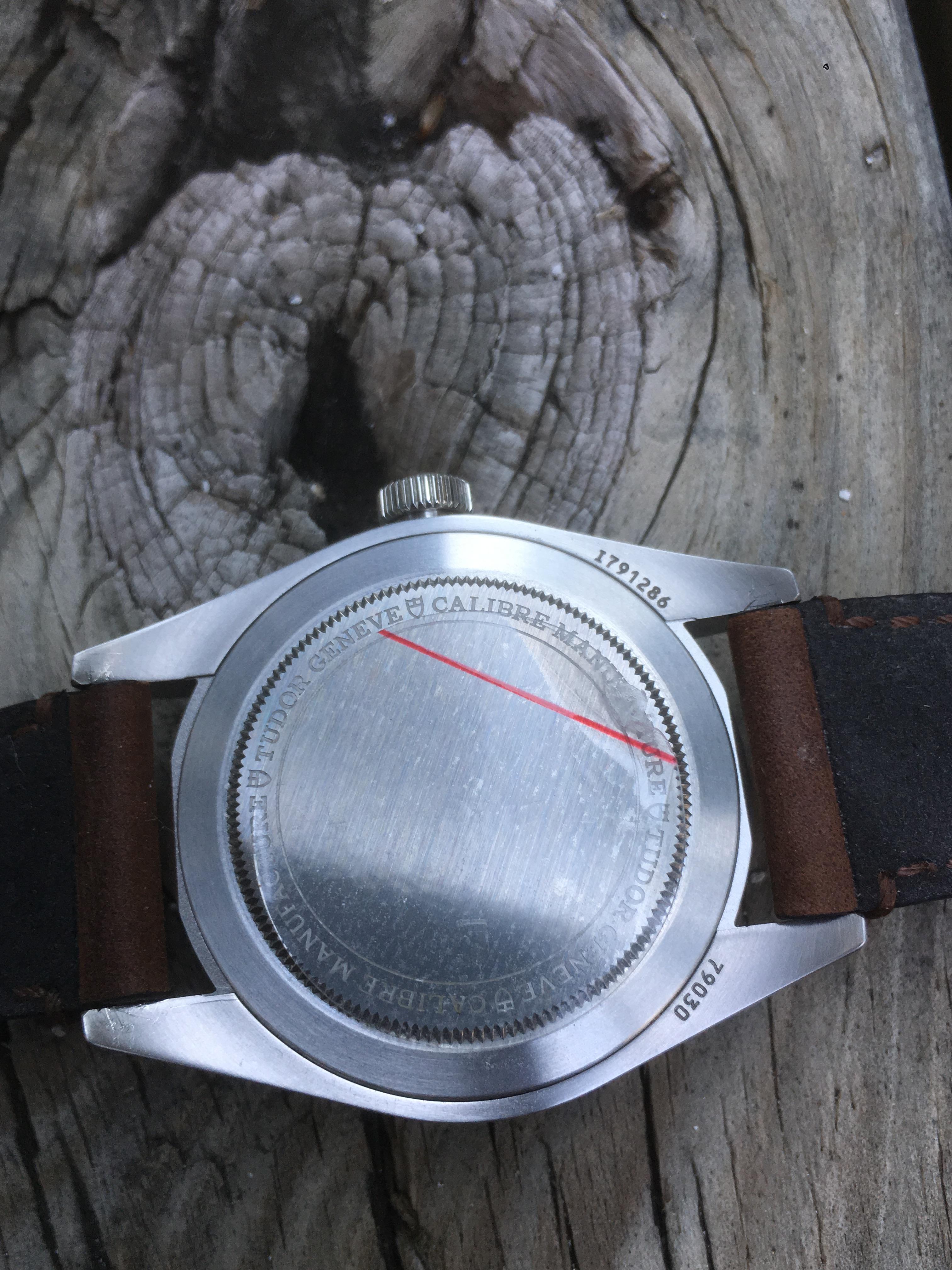 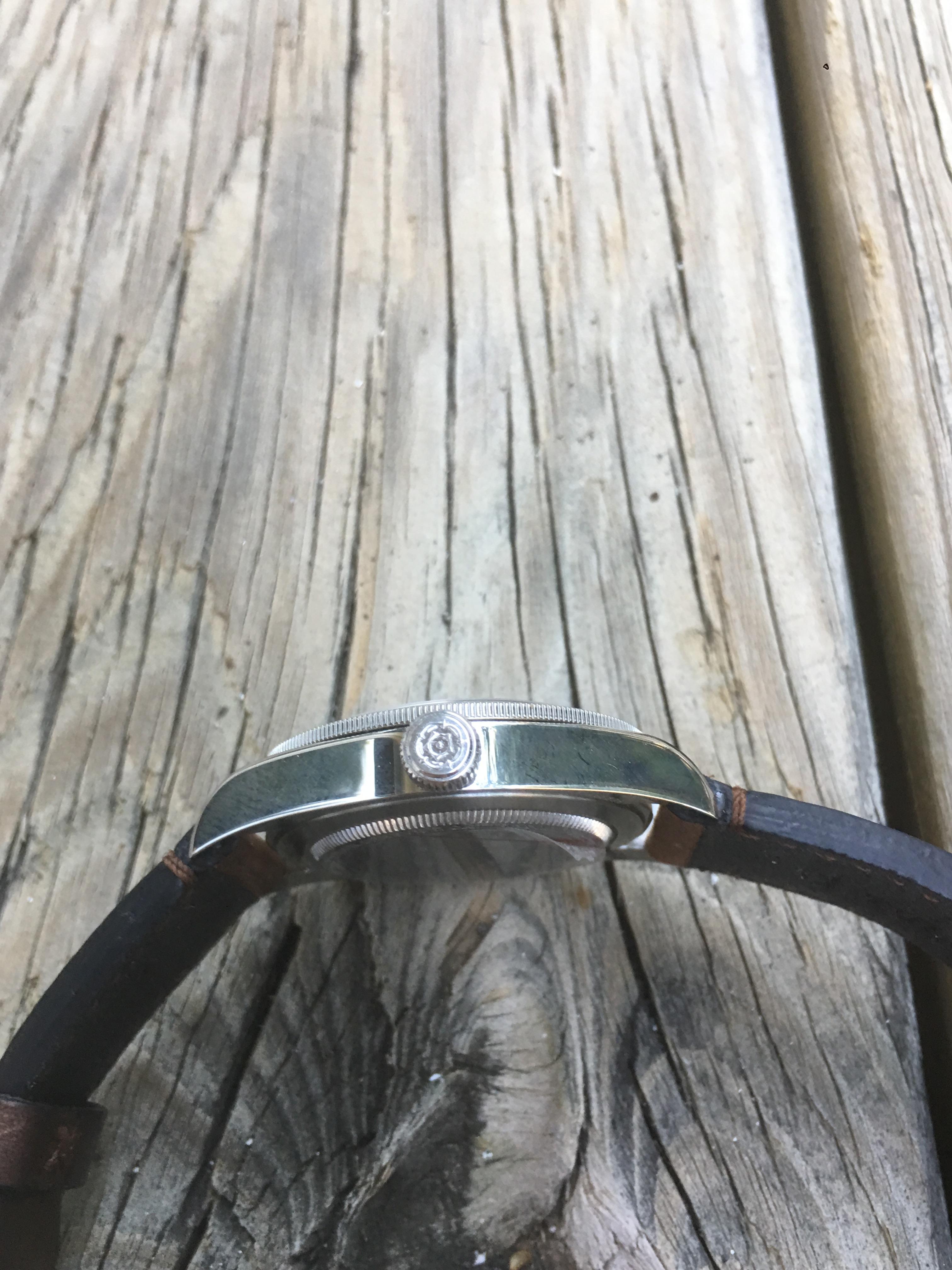 I took both the Oris and the Tudor to work w/ me today and spent what free time I could find comparing their looks and 'feel on the wrist'. The visual similarities between them are striking. The Tudor is 39mm wide & 11.9mm thick. The Oris is 40mm wide & 13mm thick. Both feature black painted aluminum bezel inserts..the Tudor utilizes a gold gilt lettering, while the Oris' is silver. The Tudor has a matt black dial & the Oris dial is glossy black..the Oris dial is noticeably curved at the edges, while the Tudor's less so. Both have circular and block shaped hour indices that are lume-filled and are encased by gold plate. The Oris also has a day indicator at the 6 o'clock mark that is unobtrusive. Of course, the Tudor lume filled hands feature their 'snowflake' design and those on the Oris are of a more mundane(but still nice) design. Pics of the 2 side by side are below. 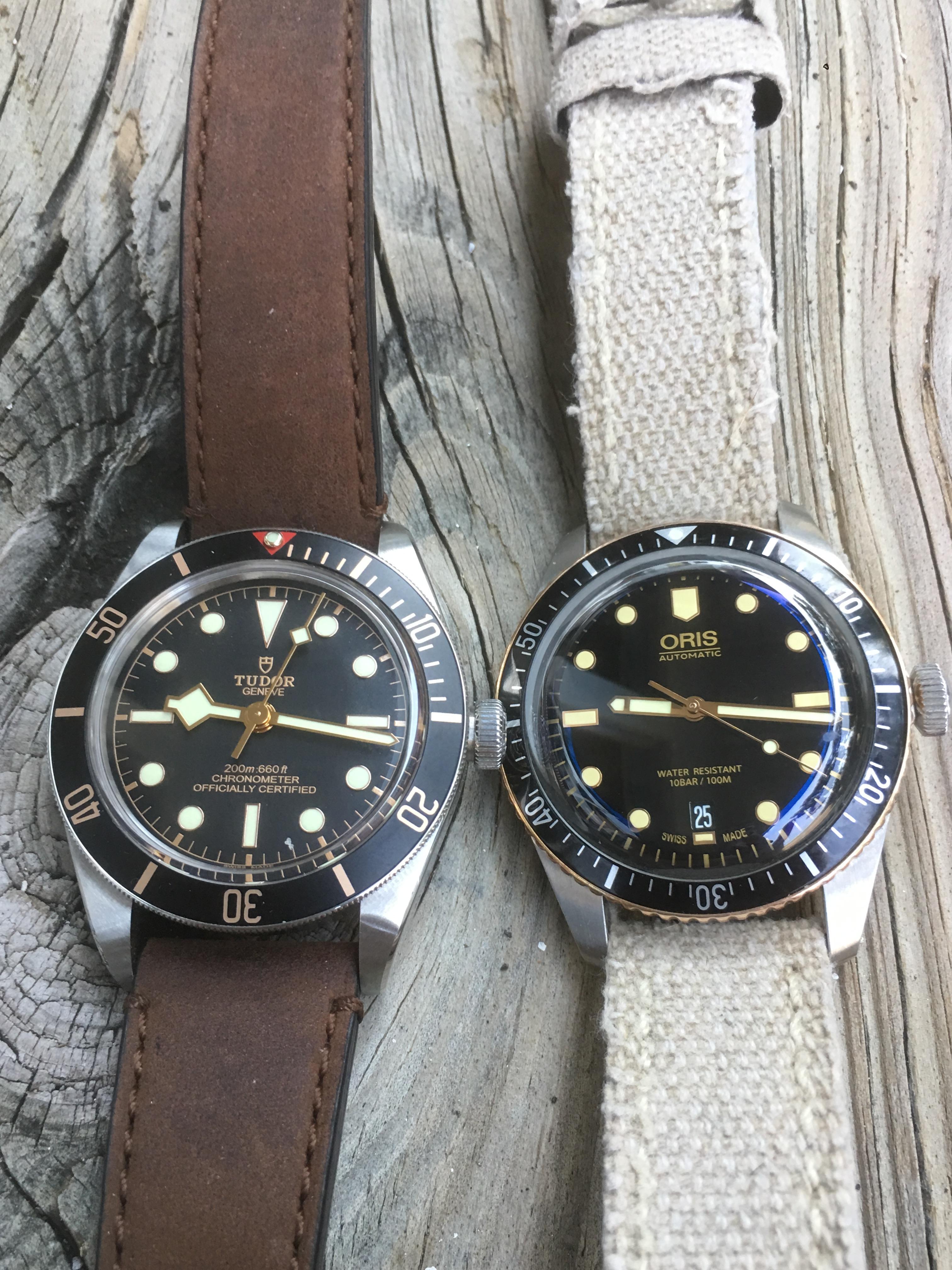 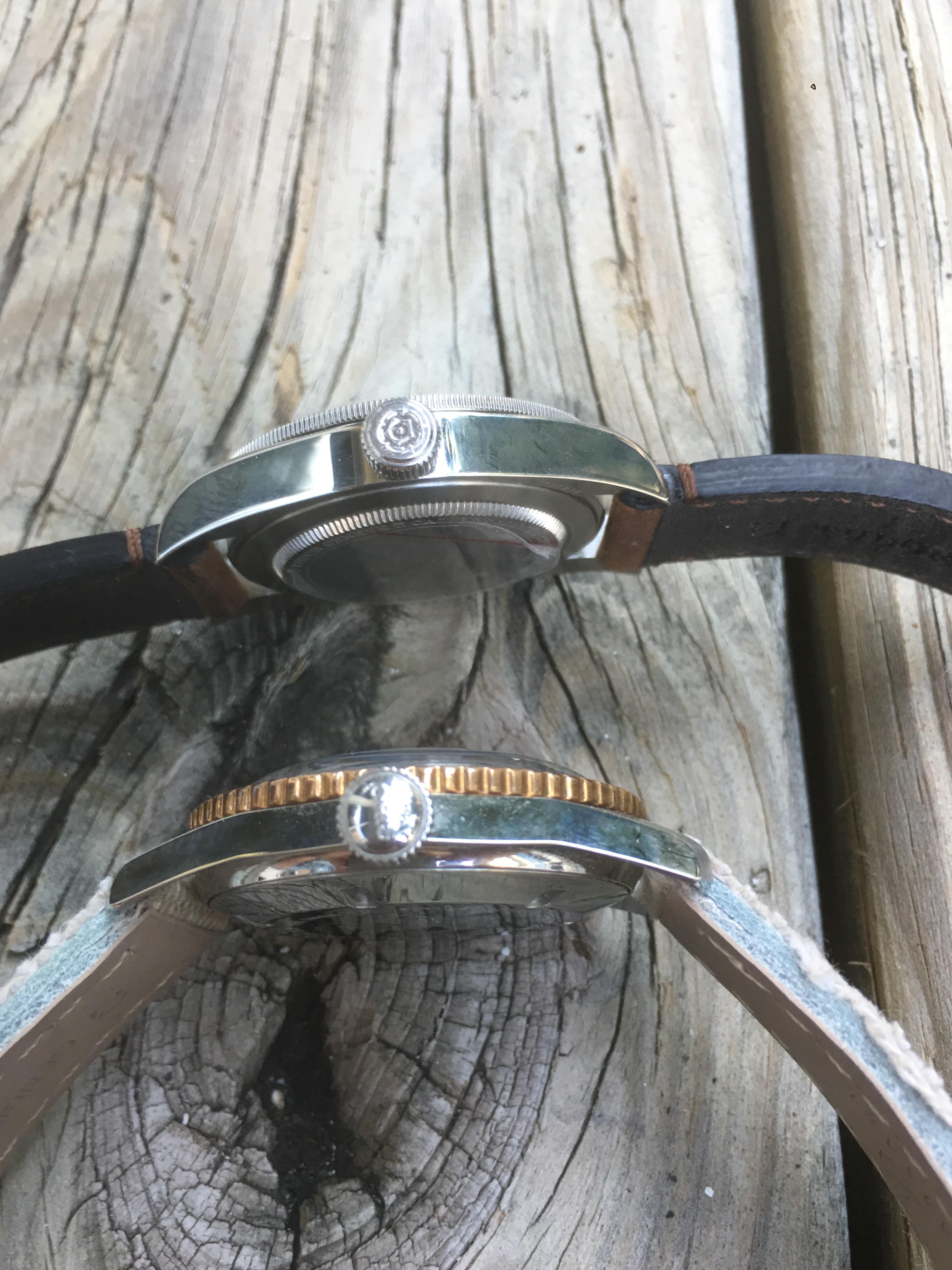 I have to say, that when I compare the 2 watches side by side, I think at least visually, it is a draw. Both dial faces are uncluttered..the bronze edged bezel on the Oris nicely compliments the gold plated edges of the indices and hands. The gold gilt lettering on the Tudor's bezel does the same. The brown leather strap on the Tudor looks nice, is comfortable, and has a well designed clasp. The same can be said about the leather strap that came w/ the Oris, but I have replaced it w/ a canvas strap..the Oris buckle is just fine, but nothing unusual. Both have about a 47mm lug to lug length, and coupled with their 39mm and 40mm case width, they are comfortable to wear.

So, there are 2 major areas of difference between the 2, in my opinion. One is subjective and the other, objective. Subjectively, the Tudor is made in the same factory that it's more famous sibling(Rolex) is. There is a close relationship between the 2 brands, especially visually. Objectively, the Tudor boasts an inhouse manufacture movement that is COSC chronometer certified and has a 70 hour power reserve. The Oris, on the other hand(wrist?), is known for quality made watches at generally 'entry-level' Swiss-made watch price points. This Oris utilizes a SW200-1 movement sourced by Sellita. It has about a 38 hour power reserve. I think, for many of us, if you like the looks of both watches, but don't have to have a manufacture movement, the Oris is a great choice, particularly since retail prices have dropped at some sites from around $2,000 to around $1,500.00 on leather. And, if you're one of those folks that hope that the BB 58 can become the 'new' Rolex Sub since Rolex seems to be pushing their products further up market, then if it doesn't pan out, you're still the owner of a very nice diver!!
Last edited by Thunder1 on July 30th 2019, 10:07am, edited 5 times in total.

I was about to type in similar words. Nice job, as always.
"Funny how things that start spontaneously end that way. Eat a peach." - Neil Young

Well done comparison. And I would venture to say it will be much easier to find a local Watchmaker and readily available parts when the time comes for service.

My only gripe with the Black Bay is the same I have with most Steihardts. A flat case is just not a good fit.
My best friend from college shared his secret to his huge financial success, "I fell out of the right vagina."

Nice work Mr Thunder. I'd favour the Oris personally.
Meritocracy: the privilege, wealth and advancement of those who chose their parents wisely.
Capitalism: a cult that promised to do good for the worst reasons.
Nationalism: a profound longing to go back to a past that never existed.