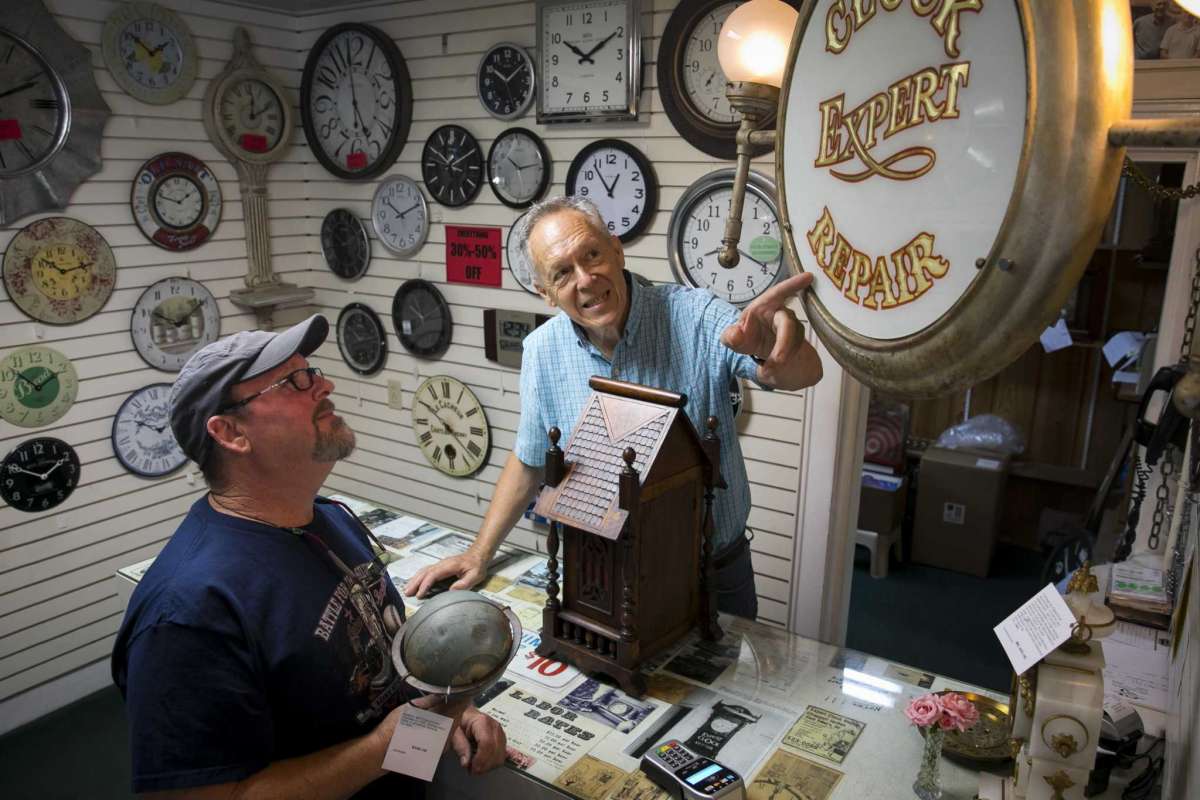 Owner Ralph Pokluda points out an antique cast iron sign in his clock store during a special tag sale for collectors at the Chappell Jordan Clock Gallery on Saturday, June 1, 2019, in Houston.

It ticks, clicks, clangs, bangs, rings and sings in a syncopated symphony as hundreds of unsynchronized clocks on display at Chappell Jordan Clock Galleries mark its chaotic forward push. In recent months, time has become the elephant in the 10-room shop — the very reason Chappell Jordan will shut its doors at the end of this month after more than 50 years.

Once a standard showpiece in a home, clocks have largely become relics — made obsolete more than once over thanks to everything from the microwaves and iPhones to sleek, minimalist design trends. And as the demand for clocks has dropped, so too has the supply of young clockmakers looking to carry the industry into a new generation.

All of this, while the clock hands keep inching forward.

A SAD DAD, A SWEET TWEET: See how Billy's Donuts got its happy ending, only on HoustonChronicle.com

The store at 2222 Westheimer first opened in 1965, and shortly thereafter, Chappell Jordan hired Pokluda as his first employee. Back then, Pokluda was just a high school kid who liked to work with his hands, and had saved a couple junker clocks from the rafters of both his grandmothers’ garages. Pokluda worked his way through college at the University of Houston, purchasing the shop’s repair department from Jordan after his graduation. When Jordan decided to retire, Pokluda teamed up with his then-employee Jeff Zuspan to buy the rest of the business.

But when Pokluda and Zuspan began discussing retirement in earnest earlier this year, not a single employee was interested in succeeding them. So they went to Plan B.

“We thought we’d try to sell the property, and see how that went. We didn’t know how the market was going to be,” Pokluda says.

It sold within a day, effectively making the owners’ decision for them. Now they’re leasing back the space, with a hard move-out date of July 31. And once they close the doors, it’s likely no one will ever open them again.

“I’m sure this building will get torn down,” Pokluda says, standing in the shop’s cuckoo clock room. Back in the day, when this building was a duplex on a largely residential portion of Westheimer, this was the kitchen. But as Pokluda expanded from a two-room shop to 10 rooms, annexing two small buildings out back along the way, he made the decision to install an archway in the door here, hang carpet on the walls, to make nailing and re-nailing clocks an easier affair, and turn the kitchen into a nest for the cuckoos.

“They didn’t even ask for an inspection,” he says of the property’s new owners. “They’ll take it down.”

That’s what happens in the Upper Kirby district along Westheimer. Taller, glossier buildings take the place of the homier buildings of yesteryear, bringing rents into the sky with them. It’s a part of life in this city that treats paving over its past like sport.

Still the “Everything Must Go” signs Pokluda placed out front has sent a shocked sadness through customers.

“You’re leaving?” Judy Komorn asks on a Wednesday morning in late May. The door behind her hasn’t even closed fully yet, but she’s already standing in front of Pokluda, demanding answers. “How could you do that?”

“I’m sorry,” Pokluda replies sincerely. “You’re not the first person to say that.”

It’s been happening for weeks now. Longtime customers like Komorn pop in for a question about their clock at home, and find themselves stupefied by the liquidation flags flying out front. “Where are we going to go?” they ask.

Pokluda has a speech memorized for them: The repairmen will continue to work out of their homes, independently. And Pokluda will keep the shop’s phone number live for at least a year or two to field the everyday questions that people lob at him — like the question about Komorn’s grandfather clock that spurred her visit today.

MORE ON HOUSTONCHRONICLE.COM: Another new brewery on tap to open in Near Northside

“Usually, I wind it on Sundays,” she tells Pokluda.

“And I try to remember, which I did now for quite a while. But this last week, I forgot on Sunday,” she admits. “And I didn’t think of it until Monday.”

“And it was late Monday when I went to the clock, and I wasn’t sure what to do. So I wound it up,” says Komorn, who — even at 78 — wears the look of a teenager explaining to a math teacher how they did the work, but still arrived at the wrong answer. “I’m sure I did the wrong thing. I pushed the pendulum, so it’s working. But the time isn’t right.”

“The wrong hour. The wrong minute. I’ve got the wrong time on it.”

“In front of the clock,” she repeats.

He offers her a card, but she doesn’t need one. After 17 years with this grandfather clock, she knows the shop’s phone number well enough, and the repairmen have made house calls to see her before.

“How am I going to fix these things when they’re closed?” she wonders aloud, after Pokluda walks away to ring out a customer at the counter.

At the turn of the 19th century, there were hundreds of major clock manufacturers.

“Now there are only three,” says Jordan Ficklin, executive director of the American Watchmakers-Clockmakers Institute.

And what was once a steady decline has evolved into a steep drop-off, fueled first by the influx of quartz watches during the mid 20th century, and further exacerbated by the Great Recession.

For the first several years of her career as an interior designer, Saima Seyar worked with plenty of clients looking to feature heirloom clocks in their homes. Then, about a dozen or so years ago, that stopped.

“It just dropped altogether. And it was such a quick drop. It wasn’t even like where you see a slow decline. It just stopped altogether,” says Seyar, who is president of the Texas Gulf Coast chapter of the American Society of Interior Designers. Chock that up to the shift into minimalist design held so dear by today’s young adults.

It’s a trend that frustrates some of Chappell Jordan’s most loyal customers.

“The clock industry has slowed down, with the millennials,” says Tom Bielamowicz, 69, on a Saturday morning, as he and his brother Larry sort through a room of as-is clocks on clearance. “A lot of this is not their style. They’d rather have that Corvette, and the automobile out there.”

Tom and Larry pull a dormant Anglo-American clock off the wall and open its face to get a peek at the gears, debating what it would take to get its movement working again. They’re each playing coy.

Tom’s wife, Doris walks out of the room. She’s seen this gracious negotiation more times than she can count in the 49 years since she married Tom. Rather than tune in and see who wins this week, she heads to another room in the shop and begins gazing at a selection of clocks on the wall.

“We have four kids,” she says. “Nine grandkids.”

And somewhere around 100 clocks or so.

But they can’t get their kids to find clocks as interesting as they do.

“Our youngest son, he bought a house just south of downtown in Austin, and restored it. And he does have one clock, but he doesn’t want it anymore,” she says. “And my son in Houston, we wanted to give them a clock, but they don’t want anything like what we have in our house.”

She walks closer to a display of tasteful, discreet wall clocks.

“My daughter-in-law always says no, clocks are not modern enough,” she says. She lifts her finger, and points at one small clock in particular. “But I keep thinking, what about these? I might bring her down here and say, ‘Just pick one!’ You know? Just so they at least have a clock — one clock.”

She shakes her head.

Clocks, says Pokluda, have never been a young man or woman’s game. Especially not the luxury clocks at Chappell Jordan, which can climb into the five- (or even six-) figure price tags. But this has become even more pronounced in recent years, and Pokluda isn’t sure whether it’s a generational thing, or simply a post-recession thing.

For most of his career, clock demand was cyclical. No more.

“We’ve seen the ups and downs before. The mid-80s were tough, with the economy. But in 2008 and 2009, that was different,” he says. “Instead of the ups and downs, we really saw a decrease in demand. And then, it sort of flattened out and it just stayed down there.”

Within two months of the beginning of the recession, his retail sales dropped by 80 percent. And while he’s seen a couple pick-me-ups since then, the store still hasn’t returned to pre-recession sales.

It’s sad, he says, as he stands in his showroom, surrounded by the clicking and clacking that has become the soundtrack of his life.

“But,” he says, a deep sigh finding its way out from behind his lips. “It’s time.”