This is one of the reasons I am so down on micro-brands: Even if they're okay, in a lot of cases they're here today, gone tomorrow.

I've only been a fan of a total of two micros - Mercer and Dan Henry - and it appears that the Mercer company, based in New Jersey, has simply vaporized. There is no website, there's a couple pieces of 'em left on online dealers, and it's almost as if the brand never existed. Mercer was a regular at the Worn & Wound annual shows here in NYC, which is where I picked my piece up. It's got a fixable auto in it in case there's a problem, thankfully.

Anyway, I think I'm the only watch owner here who has one of Mercer's watches, I reckon. I met the people behind the brand and they were nice guys; they were also selling leather goods. The company had only started up in 2014. I was looking to pick up one of their divers but I guess it's too late for that, eh. My model is called the Brigadier. I always considered Mercer a draw with DH - nice casework, fairly priced, workhorse movements. I also admired their honest advertising: Basically, "here's our fairly priced watches" - no "we're changing the game" BS, no come-ons, no Kickstarter. I didn't mind buying from them at all. 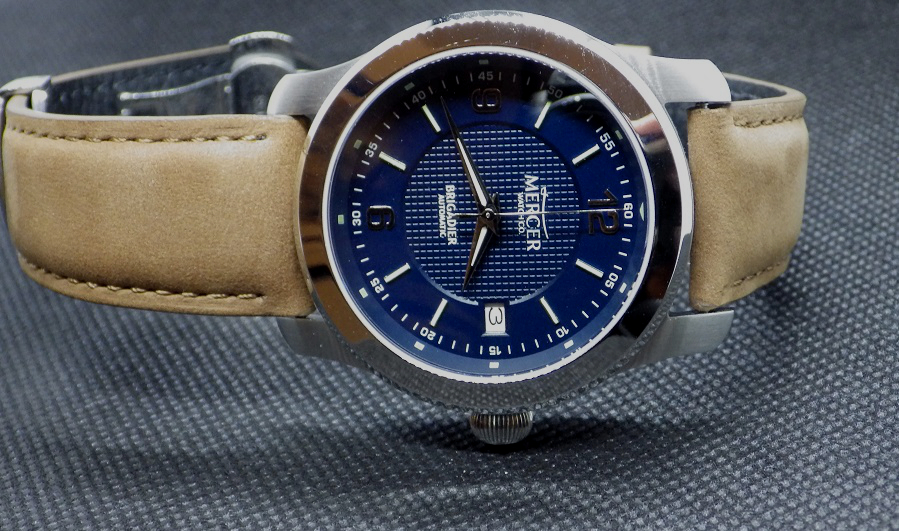 That's tough news; I've heard that they made a good product. Alas, there are plenty more small businesses that are going toes up these days.

Hate to hear that. Haven't ever heard a bad word on their watches.

Guess they just didn't appeal to the TeeVee crowd since they were classy, well made, affordable and without some Staur-esque BS backstory.
My best friend from college shared his secret to his huge financial success, "I fell out of the right vagina."

Look okay to me- never heard of them in time not to buy one.
^^^Copyright

Well, damn. I actually liked them. A few years ago I took the short train (BART) ride into San Francisco for some sort of watch symposium. In prior years WatchTime used to host a high-end cocktail party and dinner with a speaker that offered an overview of what was going on in the global watch world with various brands. I held a gawddamn $455,000 - a skeletonized double flying tourbillion so damn soul-consuming that I just about knocked over the glass of champagne I had set down to look at the “watch”, a brand that now “escape”’s me... I also got a chance to speak with “that Roland guy” from RGM, who seemed to be a pretty damn cool dude.

I left with a lot of swag, but I bought no actual product - than the ticket to attend, about the price of a concert.

They stopped doing that... it was probably difficult to break-even on the event, but it sure was fun.

Then, after a few years of nuthin’, a bunch of odd micro and semi-haute watchmakers and/or assemblers put together a NEW event in San Francisco.

It was fr-fr-FREE... so, there was no booze or grub. Instead there was a less posh but still cool low key event of aspiring up-and-comers showing off - and, unlike the WT event - actually selling their latest watches or leather straps.

It was very low key, and everyone was super cool. That’s where I met Jimmy Collins, really dig the PVD coated chronograph they made, and he made an agreeable deal with me (he didn’t have a lot of stock and his plan was to leave with none. We shook hands, I spoke with him a little longer about... skiing? Surfing? We were all over the map... but that’s why it was cool to walk up to the counter - meet a guy, seems like a cool dude, you have common interests, oh - and he makes a small batch of watches using various movements depending on how much you want to spend... Out of a huge number of buying moments THAT was definitely my favorite watch buying experience.

It wasn’t until I was on the way out that I saw the table where Mercer had set-up shop. Again, the sales team seems really down to earth and completely approachable. I saw this damn blue dialed diver, I believe called the Voyager II? It had a stunning deep-blue sandwich-dial, and one of the first blue ceramic bezel insert I had seen on an everyday watch. And he made me a sweetheart deal... but I wasn’t supposed to buy anything at all. And I was already holding the Collins chronograph under my arm, soooooo...

Though I do still like that chronograph I purchased - a very low number (#9) of a couple hundred.

But I don’t see those damn Voyager IIs anywhere ever these days...

It makes sense you like their watches, it seemed they made a good product... but it’s easy to move money around trying to generate income while instead losing your ass...

I suspect it may have been difficult to maintain a profitable price-point in such a crowded marketplace.
Oversteer scares passengers, understeer scares drivers...

There you go - like that, but a really cool blue. Also, you’ll notice the m/s hands reach all the way to the minute track. Which, conceptually, suggests they at least pay attention to what they are doing...

There you go - like that, but a really cool blue. Also, you’ll notice the m/s hands reach all the way to the minute track. Which, conceptually, suggests they at least pay attention to what they are doing...

Imma have keep an eye out on that enabling watch recon, indeed. That’s a great watch for peanuts.

Yeah - the Voyager II. Really cool piece. I missed out, apparently. Too bad - I had my sights set on a big purchase and pushed the smaller ones aside. I'll still keep my eyes open.
Post Reply
9 posts • Page 1 of 1