Have a love for a bygone era? Discuss you vintage loves here!
Post Reply
9 posts • Page 1 of 1

So just a while ago someone offered a bundle of two Enicar on a German "classified" site operated by ebay. I was interested in one of them, and contacted him. He said he already had someone interested only in the other one - which was a "Sherpa" model, so more prestigious. I would have taken both, but that did also suit me, and I finally managed to secure this beauty, along with some original Enicar straps from the 70ies, at a very reasonable price: 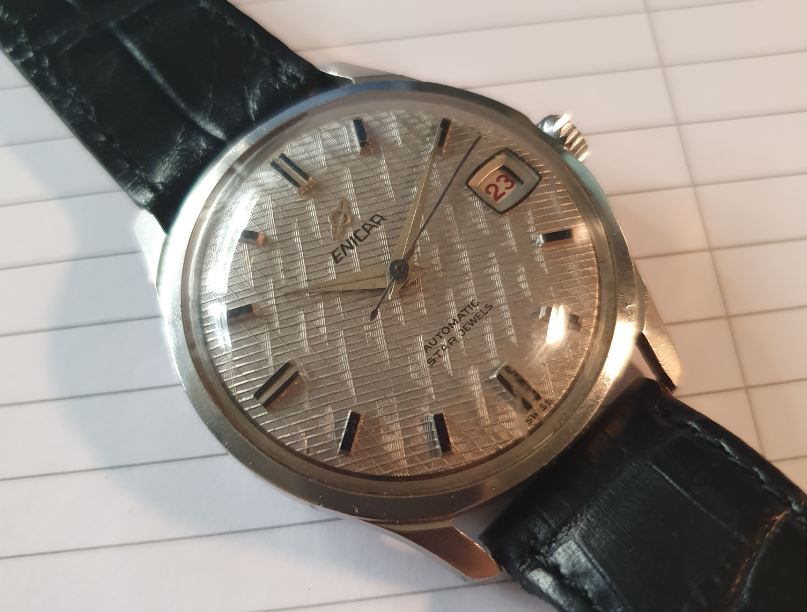 The "tapestry" dial is awesome at close range.

He sold it has "handwound", but from the reference number as well as the movement it was clear that it is missing the automatic bridge and rotor, and settled the question why the dial says "automatic". And I happen to have spares here, so I will get that fixed easily. Alone selling the spare straps with the original Enicar buckles and print will re-imburse me with probably half of what I paid in total (despite these are 60ies quality, both leather and "tin buckles", not what one is used to these days.)

But the buckle mounted on the watch shown in the picture above is of a different kind, more solid: 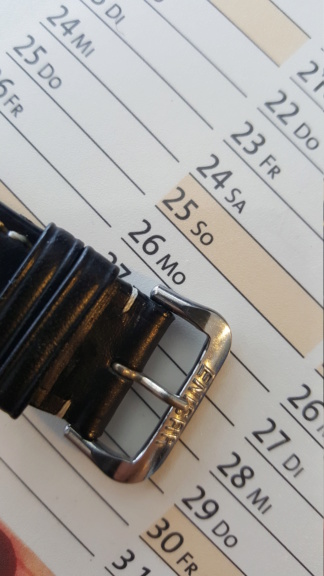 These buckles do by now go for 30-40 a piece, if You are lucky to find one. Unfortunately some of those on the market have "unconventional size", so it is not straight forward to find a strap that fits. I have them mounted on a number of my Enicar, bought them early when the hype was not so bad yet.
Ardnut since 1989

That watch is the fucking tits, Gerdy! (This means it's really good, like a fine pair of tits. "Tits" is a slang term in English for women's breasts.)

Really nice, especially considering its vintage. Great job, as usual.
WatchGeeks will go down in watch forum history as the worst watch related site that existed. Trolls, threats, bannings, and owners and sponsors talking out of their collective asses to fleece people out of hard earned money. - Koimaster

Look up 1960's in the industrial design dictionary and that dials' picture is there.

Many a Watch God drain horns of their finest ales in salute of your fine ass find..
Last edited by Thunder1 on February 16th 2020, 6:05am, edited 1 time in total.

What a find. Fantastic condition.

How about a close-up shot of that dial, sir?
"When things are at their darkest, pal, it's a brave man that can kick back and party." - Lt. Tuck Pendleton, Innerspace