Have a love for a bygone era? Discuss you vintage loves here!
Post Reply
8 posts • Page 1 of 1

As I have promised, here's a more detailed look at the Alpina bumper that landed in my collection yesterday.

Here's a picture taken in the daylight: 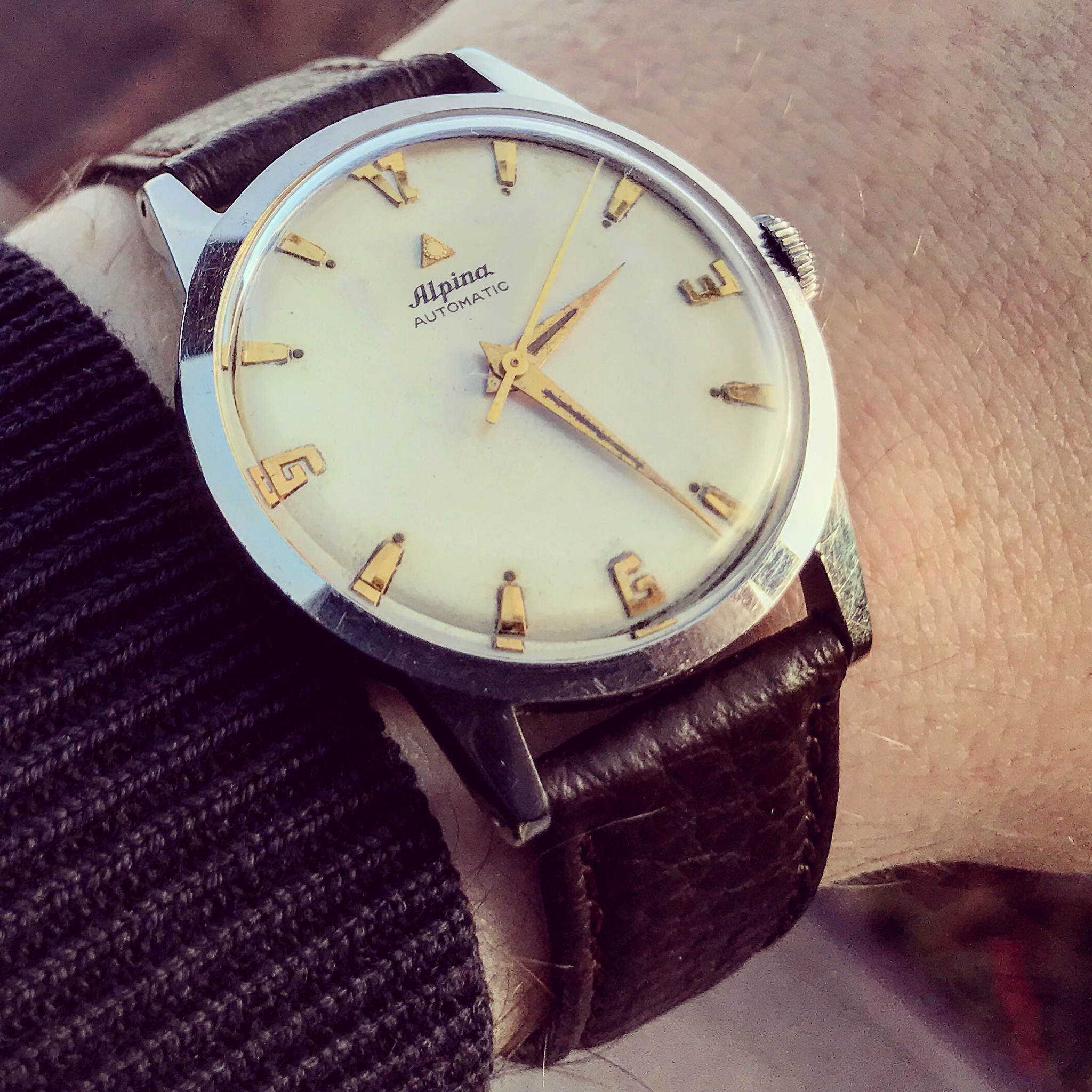 The dial is intriguing in a few ways. The design of the hour markers is certainly cool - the straight markers are nicely faceted, and the way they glisten in more intensive light is hard to miss. What I really like about it, though, is the design of the markers at 12, 3, 6 and 9. Got to be one of the nicer takes on that dial layout that I've seen.

The radium lume, darkened with age, is quite dead, and it probably wasn't much better back when it wasn't - just two tiny strips of it on the dauphine hands, and tiny dots by the straight markers.

The applied logo is the most interesting thing, though. The finishing on it is quite amazing - a tiny dial with a chapter ring with Roman numerals is raised above the triangular base. Gives the whole dial this really three-dimensional look that has me check the time for just a few seconds longer, these few seconds being spent on thinking "fuck me, that's beautiful." Looking up Alpina bumpers of the 1950s, I found only one model which had that feature - the Alpina President. Now, this isn't the President, as the President featured the cal.584C (C standing for Calendar - in this case, a simple date window). It also had a three-piece case. Speaking of the case, in this shot, which I have posted earlier... 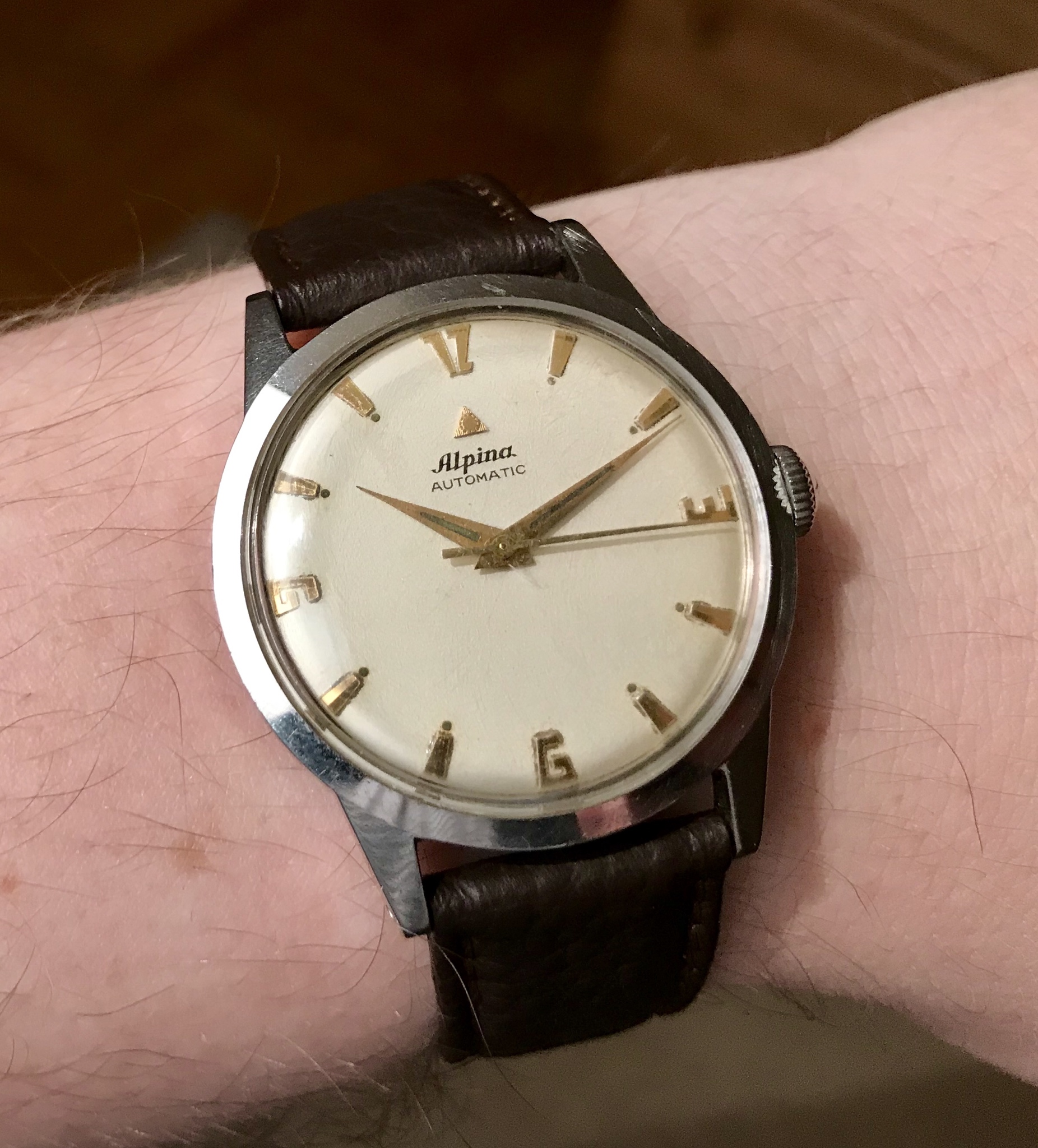 ...it looks like the case is a three-piece with the bezel being a separate part. Is it? Well... Nope. 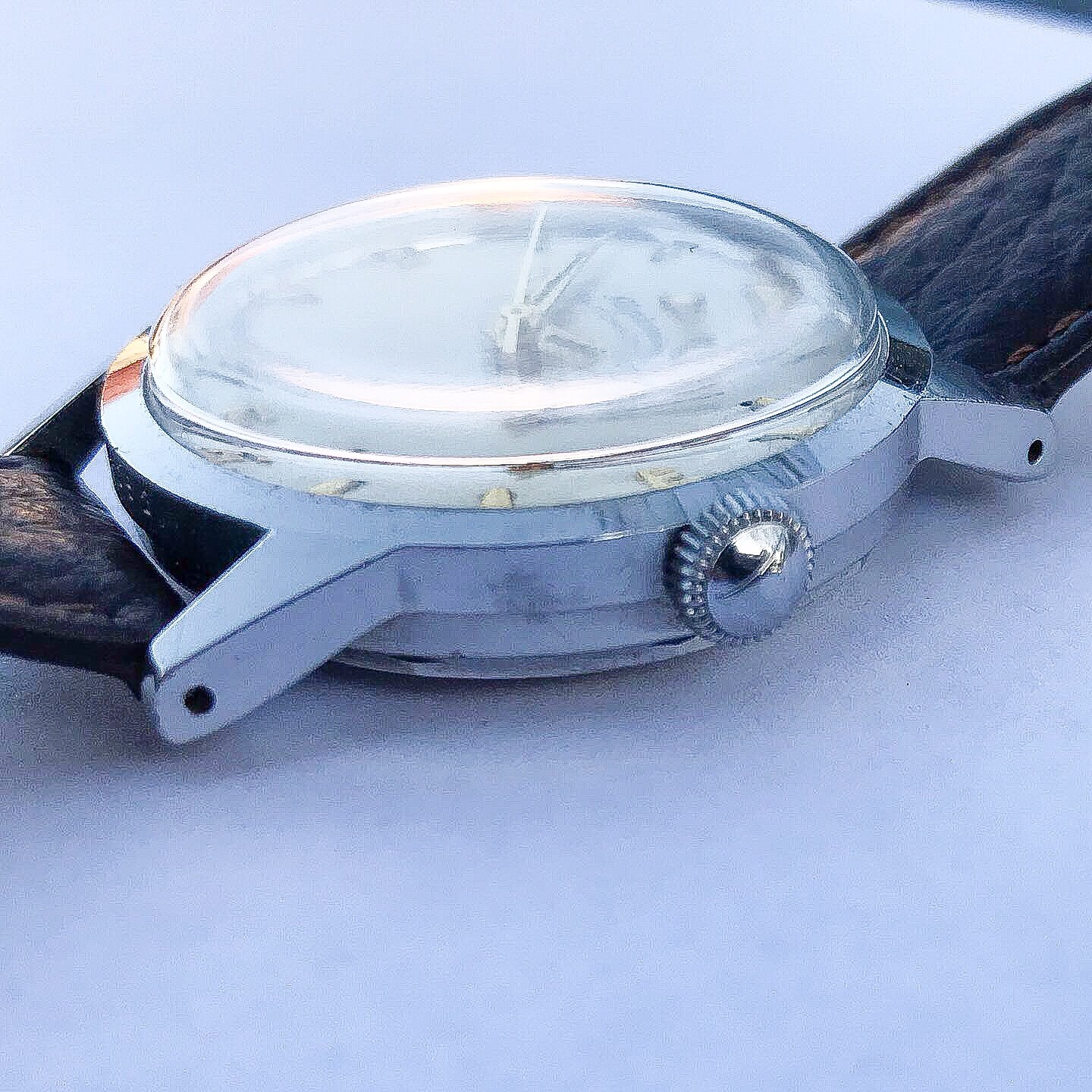 Unable to catch good light indoors, I had to take some pics outside, and my hands were, like, freezing, like... So it turned out worse, and it was still the best shot from a few bursts

What it is, is a two-piece with a really sharp edge between the facet of the bezel and the lugs. The sharpness of the edges makes me pretty sure, that this case has never been touched with any polishing tools ever since it left the factory.

When I first saw the flank sitting really high above the rest of the case, and this case back... 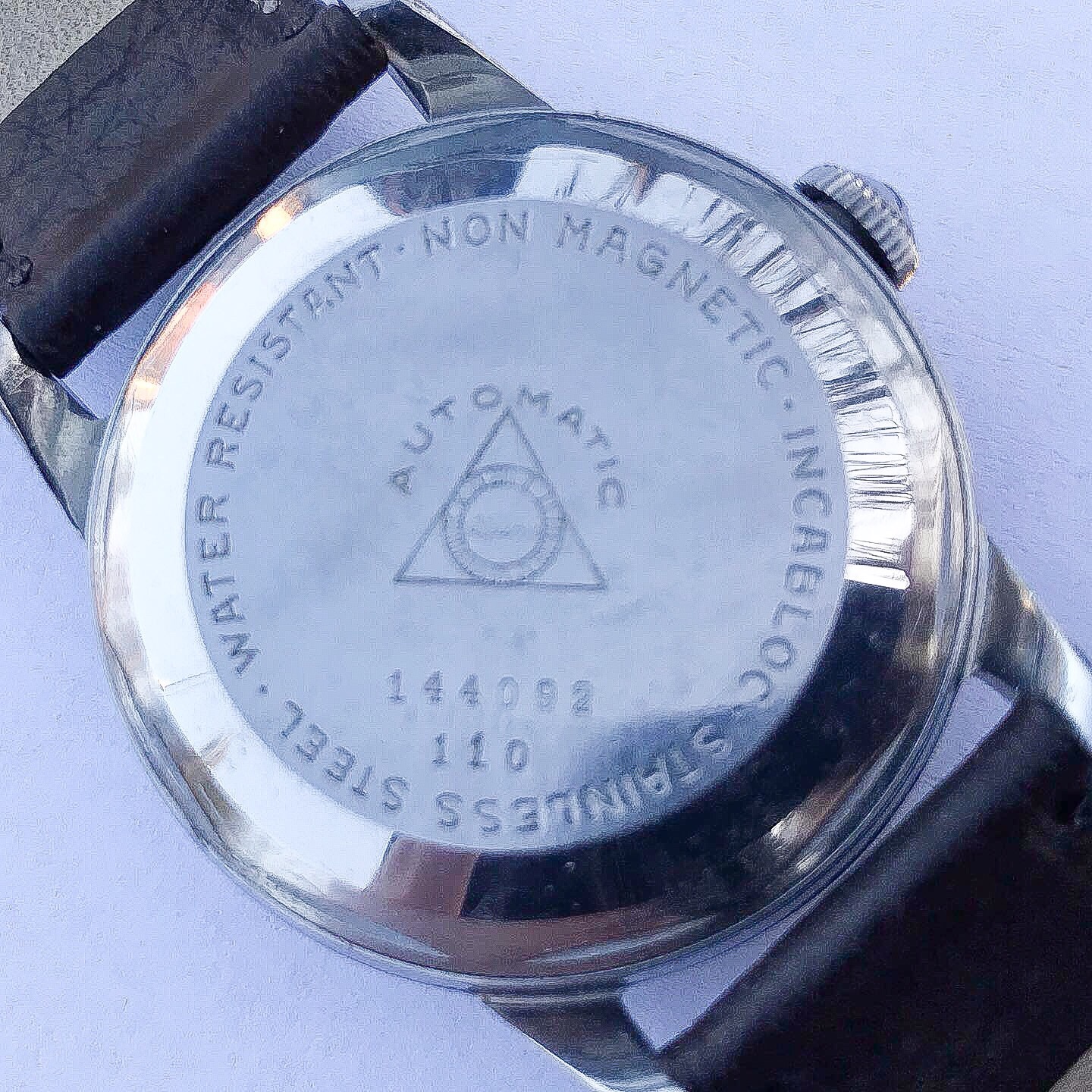 ...I guessed that it might be a Taubert Freres case. Now, of course Taubert wasn't the only company to have used such a case back- for example, Zenith has used cases with a similar back, and not made by Taubert. So did scores of other companies. The shape of the crown (stamped with the Alpina triangular logo) was similar to what I have on my Mido Multifort Powerwind from 1959, featuring a Vacuum case by Taubert alright.
And my guess was well-founded, because this 34mm chunk of steel is a Taubert Vacuum: 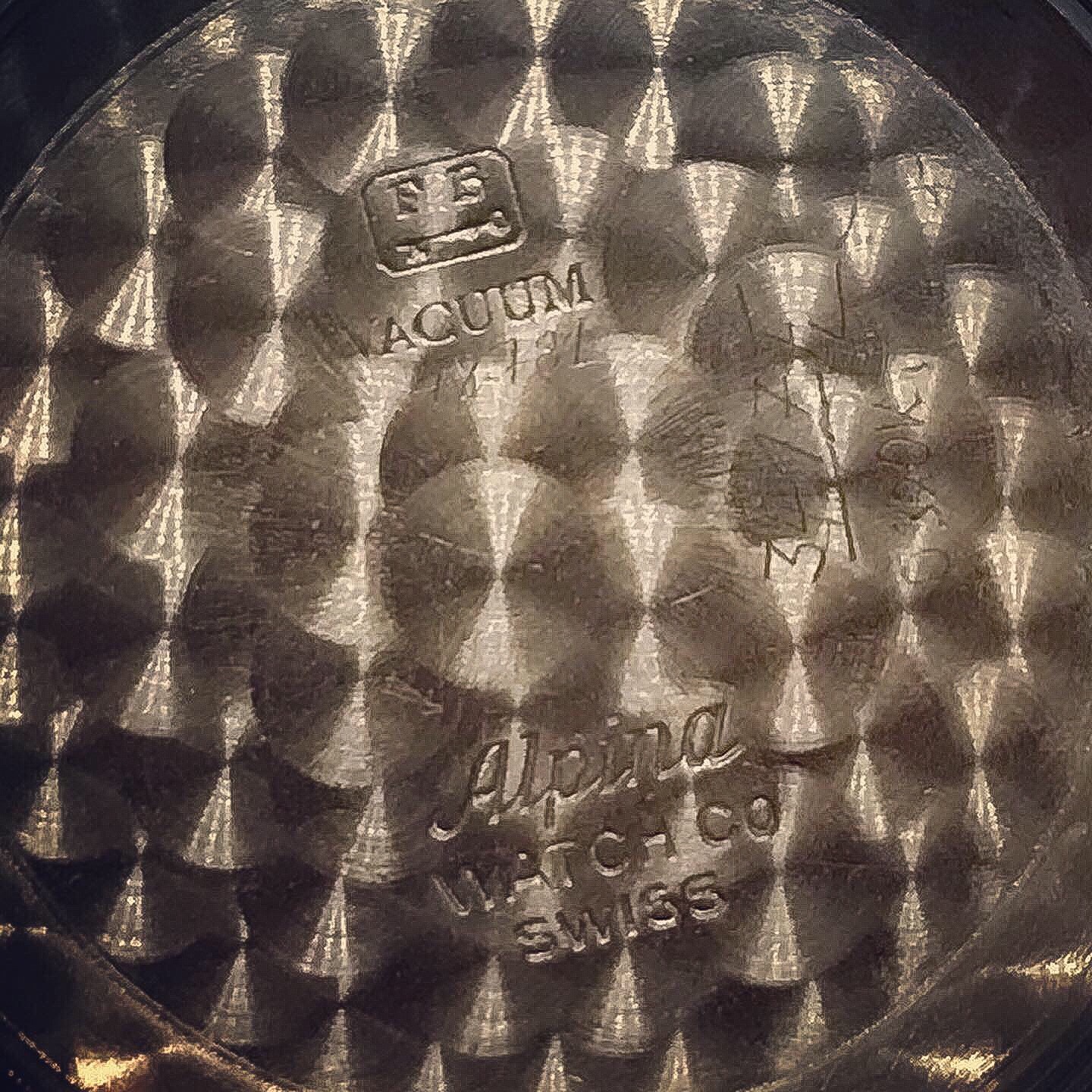 According to David Boettcher's extensive resource about the Borgel and Taubert history and designs, the FB and key logo combined with the Vacuum marquee was used by Taubert Freres in the mid 1950s. There probably isn't any researchable, fixed time frame for when exactly. I understand "mid 1950s" as roughly 1954-1956, but could well be 1953-1957? Depends on what year in a decade do you consider the end of "early," and which one is what you'd call the beginning of "late."

I did some enhancement of the photo of the movement, which - considering the bad lighting - didn't turn out so bad at all. 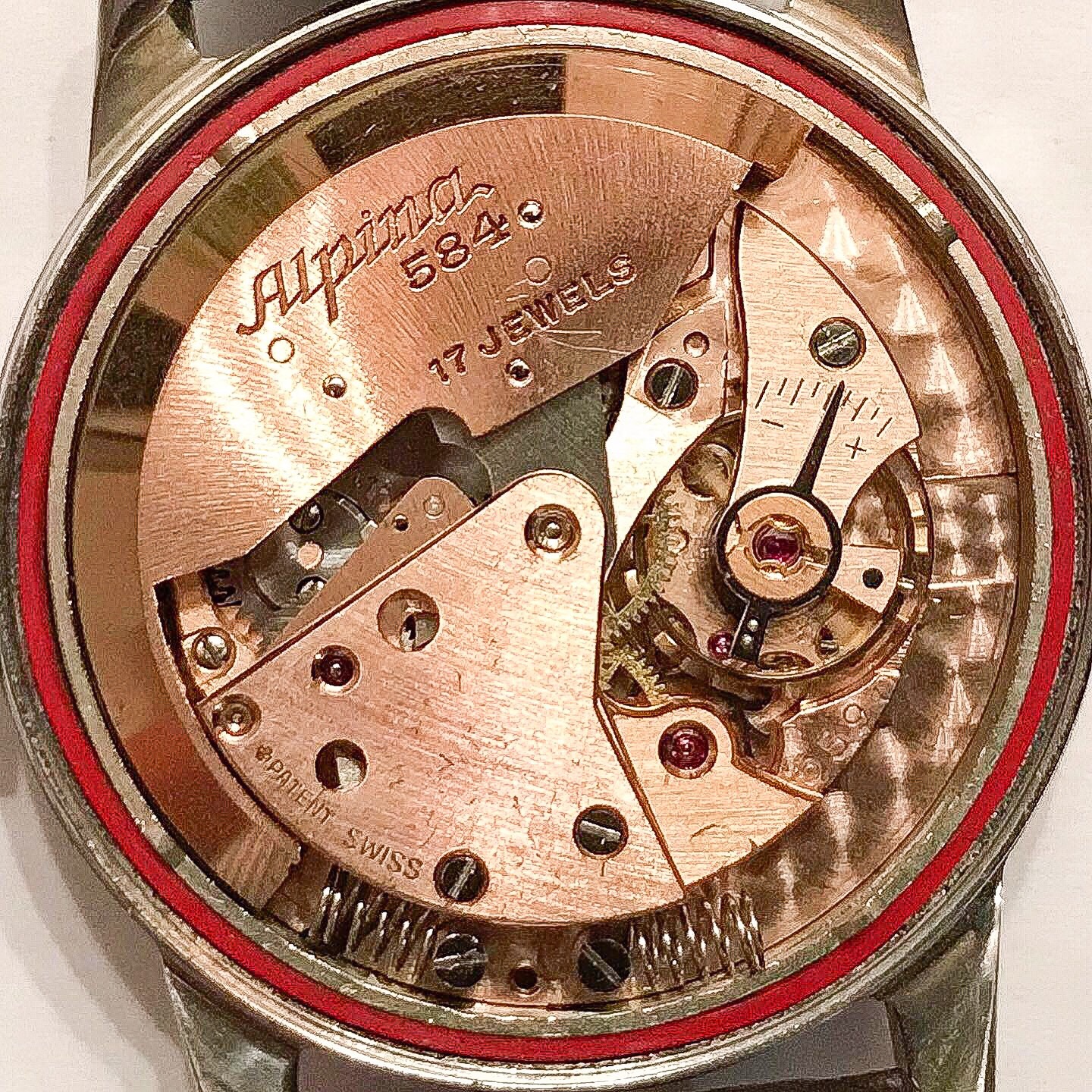 The 584 is nice to look at. I mean, who doesn't like that coppery finishing on movements?
From a technical standpoint, this is really no work of art. It's basically a cal.594 (which is a 590 + indirectly driven sweep second) planted on a larger baseplate to accomodate the automatic winding assembly.
So, what we have is a sub-second base calibre, with the indirect sweep second and its bridge on it, then topped with the entire auto module. Sounds like it's not very thing? Damn right, it fucking isn't. The base cal. 590 stands at a modest 3.5mm of thickness, the 594 with its sweep second assembly - at 4.15mm, and the 584, with the bumper...at 6.15mm. This is thicker than the 5.45mm of the Omega 351.

Now, the automatic versions of most movements need some protection from the rotor or hammer putting stress on the mainspring while the watch is fully wound, and still in use. This will usually be a redesign of the mainspring barrel, the bridle, and by extension, the mainspring. For whatever reason, making an automatic out of this base calibre has clipped the 59X movements' power reserve from 46h to 37h in the 58X bumpers.

I must say that the operation of this movement is really, really pleasant. The whole "bump" here is pretty gentle. Yeah, I feel it more than the rather noisy rotor in the ETA 2824 in my modern Edox, but...not by a large margin. Oh, I can feel it and hear it, but it's just a gentle ringing of the two bumper springs, and if I don't really think about it, it doesn't remind me that it's there.

All in all... It's a really cool thing, this one. Design-wise, it's something of a dress watch. No "sectors," fancy scales... Still, it feels like it was meant to be the sort of watch that'd have served its purpose well in most circumstances and conditions, not unlike the more dressy of Mido Multiforts. It'd have been a dress watch when needed, a casual watch after you'd get out of work, and it would have handled a trip to the seaside or camping by a lake with ease. Looking at the condition of this one, I reckon it probably was all that, in the hands of an owner who took good care of it. And, well, now it has another one taking good care of it, to make sure it will serve generations to come. 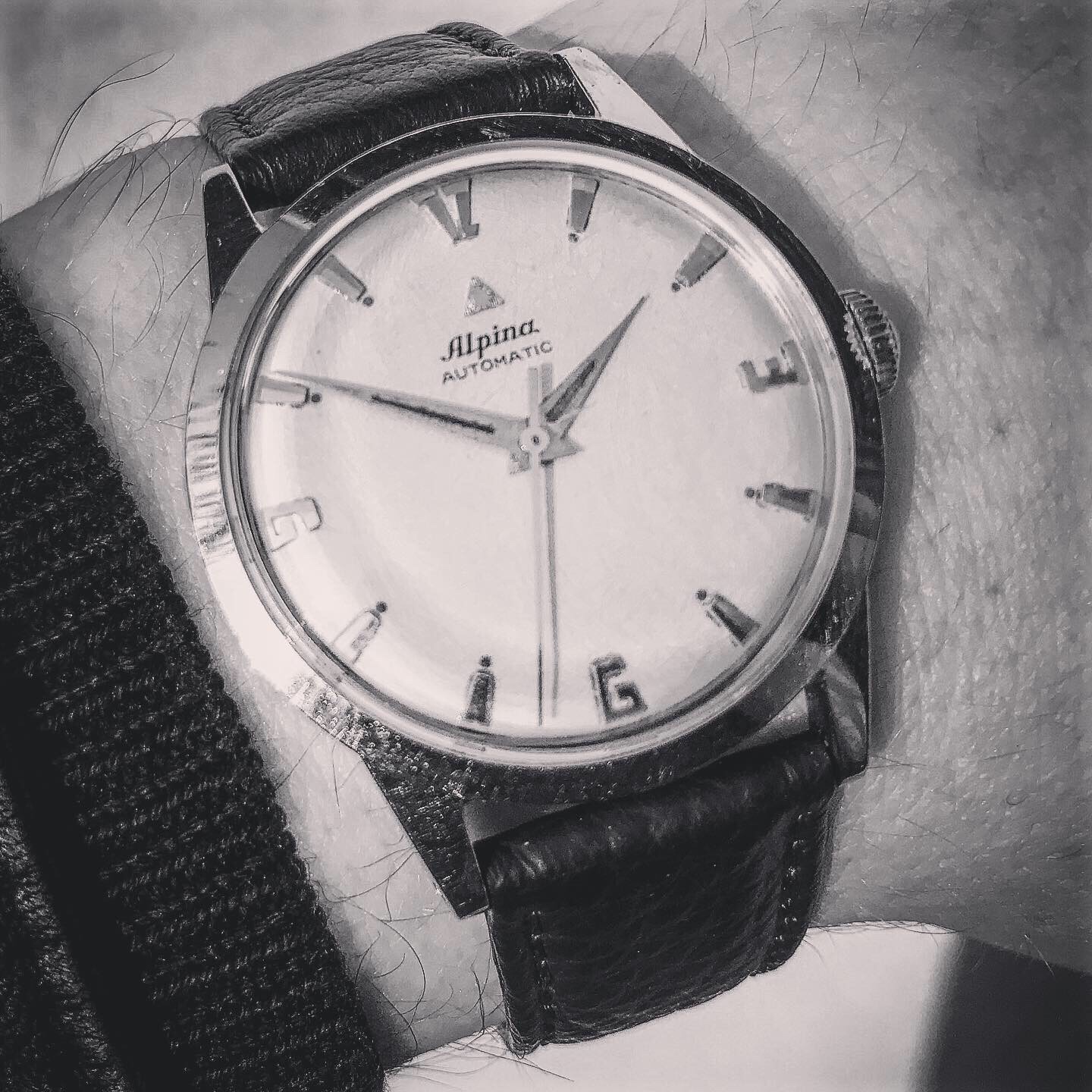 An absolutely first class review, Mr. Bloke. I learned a lot from it!

Excellent and entertaining writeup as always. Watch is very cool.

Now that is a top notch review and great photos.

A truly beautiful and very well cared for watch. Know that it is in great hands now for another 60+ years.
My best friend from college shared his secret to his huge financial success, "I fell out of the right vagina."

Nice write up!! And a great addition to the collection.

Thanks, chaps. Some more shots: 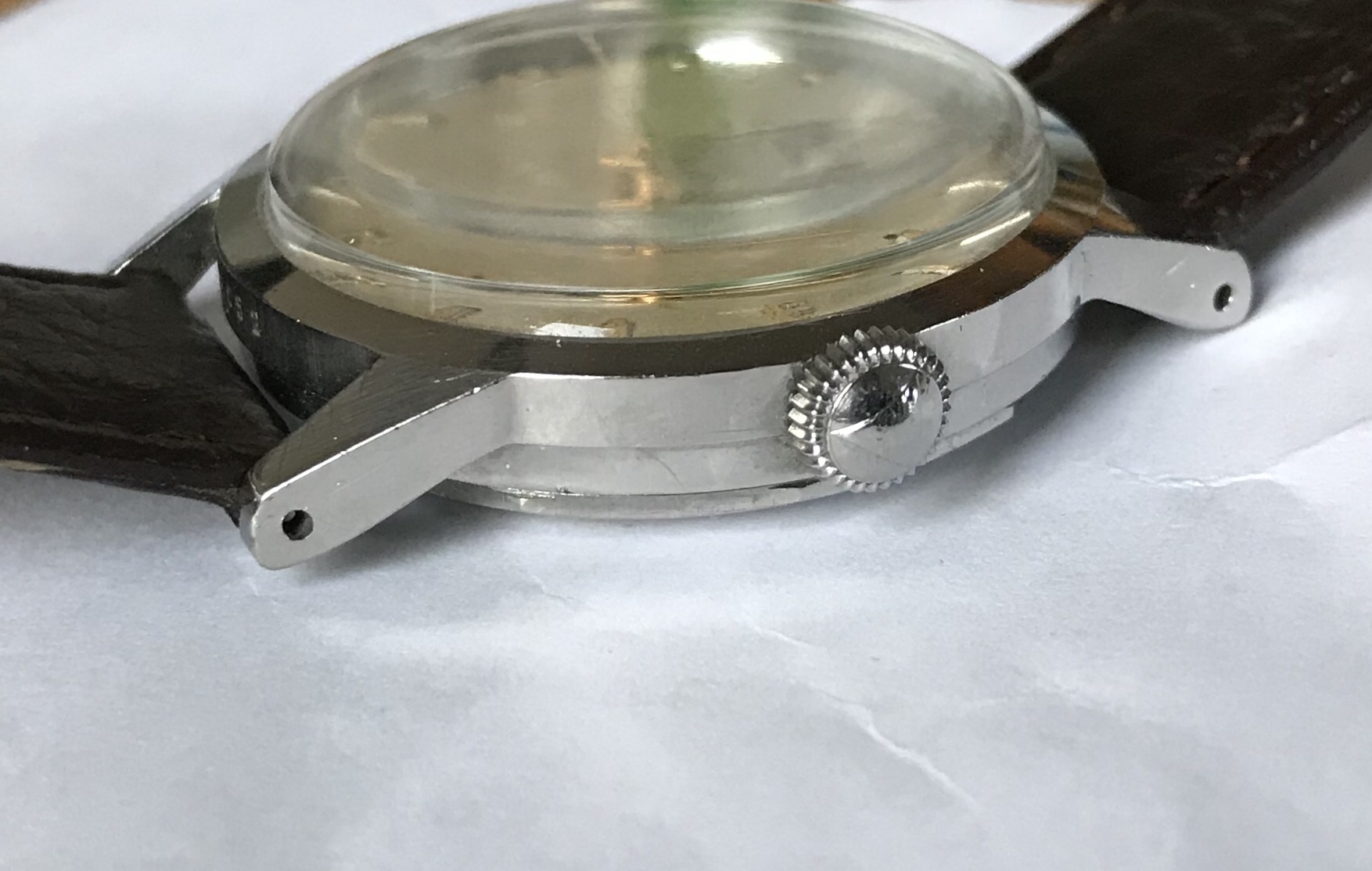 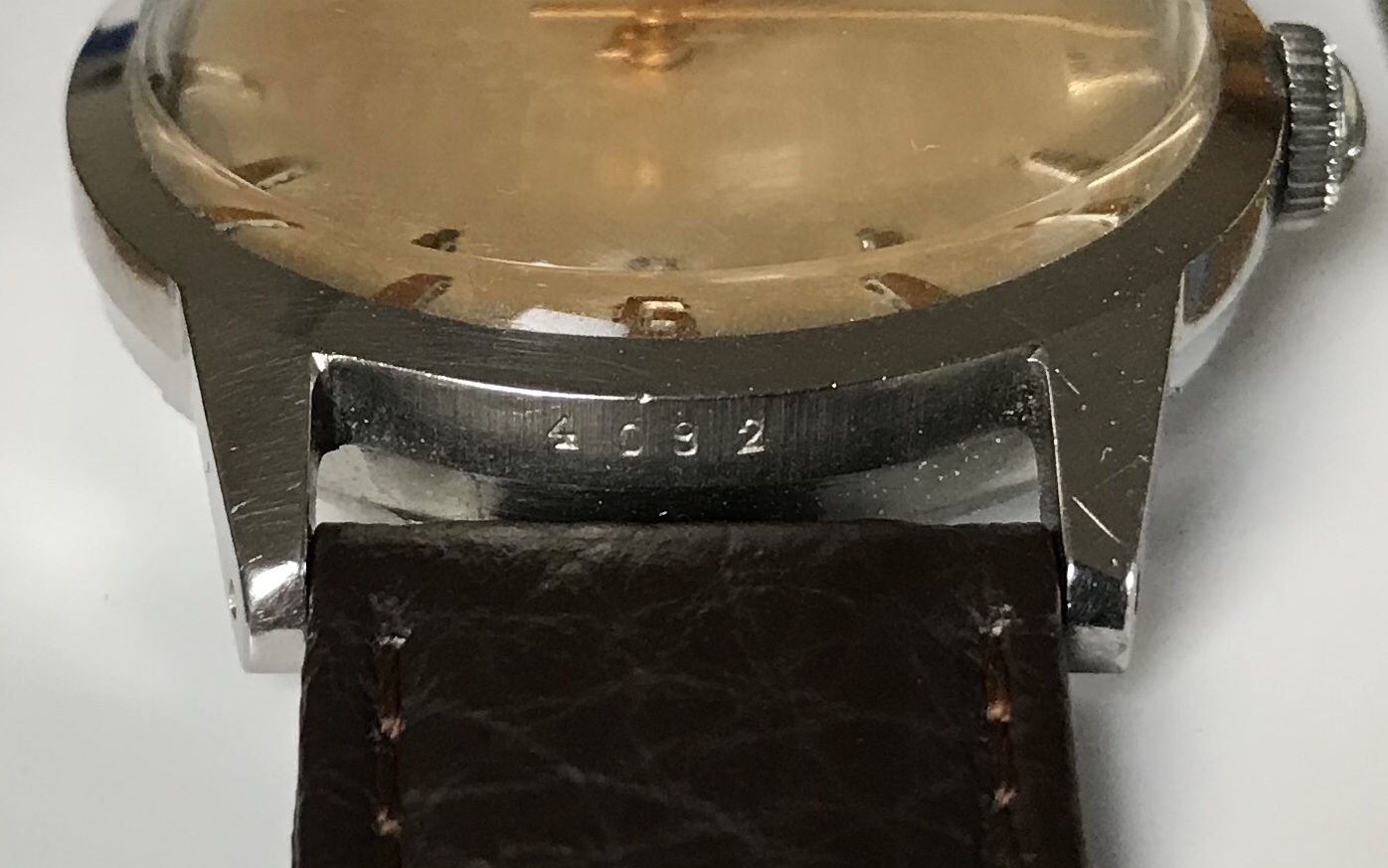 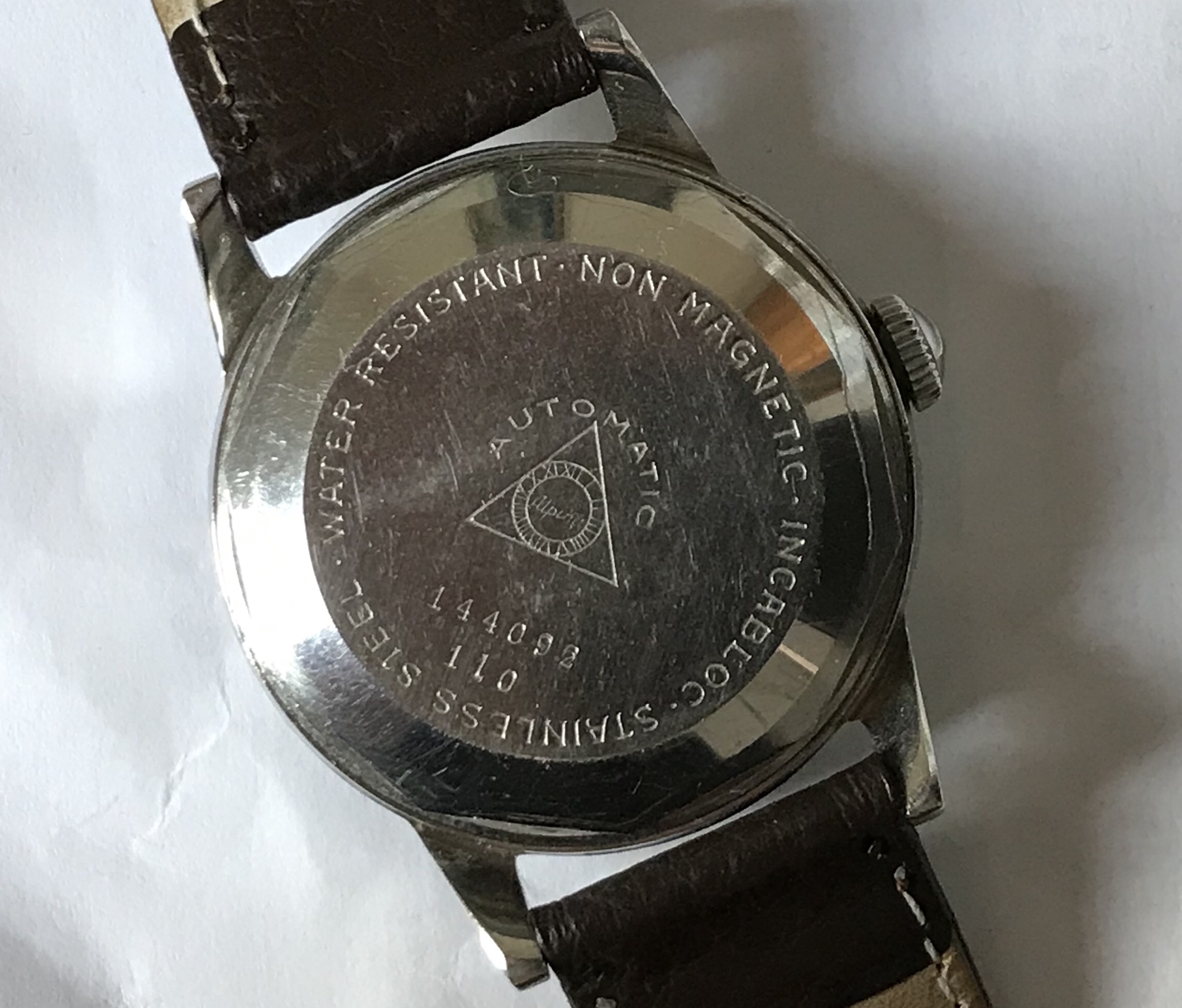 I enjoyed that write up and seeing the photos. Super cool find.