Here is a recent addition, a Spinnaker Dumas, which I bought used. It is not a watch I would have specifically sought out for myself. It came as a trade in at my friend's store where I used to work. It didn't resell quickly enough so I got it cheap.

Perhaps this color and size (44mm x15mm) make it a bit garish, but I'm okay with it. The hexagon shape is not really to my liking but that tends to mostly disappear when I put it on. Some might not like the no-lugs design. The indices extend off a chapter ring and stand quite high off the dial. It really has a deeper 3d appearance than most and I quite like that. I like the hands.

Seiko NH35 movement is visible though the back window. Good. Nothing exciting but far better than a no-name that can't be repaired or replaced. It's a hacking movement and can be hand wound. Spinnaker put their own rotor on it.

The original shark mesh bracelet seems great - that is, until you actually try to wear it. It might work for someone with the exact wrist size. But on me it has a huge overhang and the holder is absolutely useless (sorry, I didn't get a picture of that). Unwearable. So I immediately changed it out for a generic shark mesh (ebay $12) I had on another watch.

Build quality is decent enough. Sapphire crystal but the bezel is cheaper glass of some kind. Spinnaker sells these direct at $250. Compare to a Seiko Samurai, also a chunky watch with similar build quality and same movement, then add sapphire crystal. Yeh, so it and it basically feels like an acceptable value - apart from the useless bracelet. I would not have bought it without a plan to replace that. But as an owner and with the new bracelet, I give it a rating of "2 notches above meh". 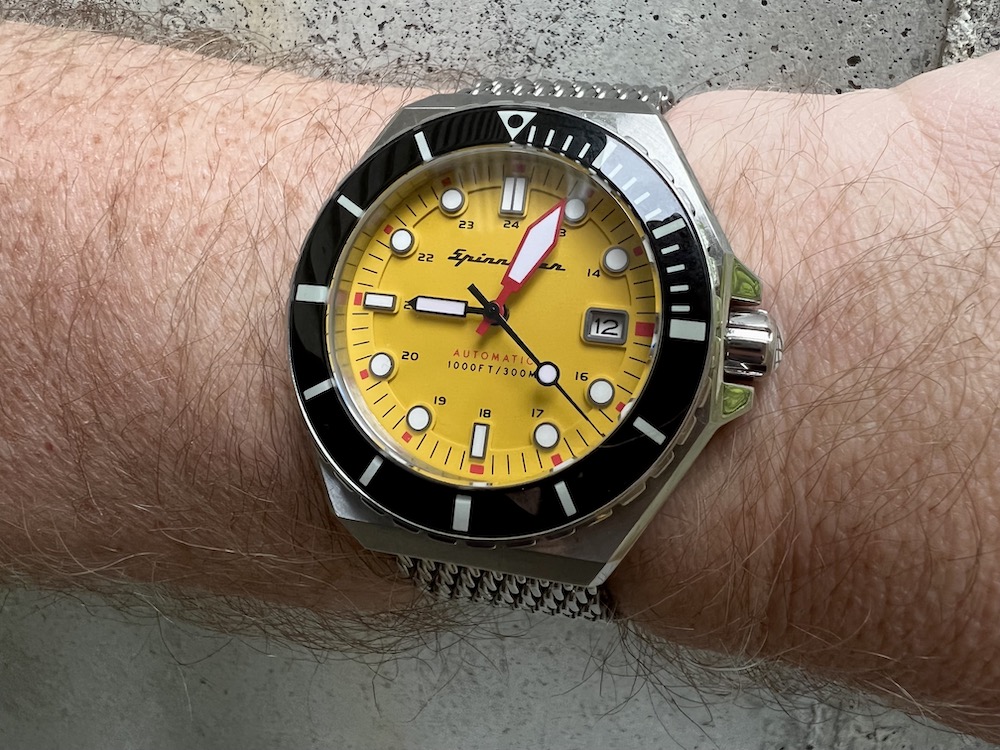 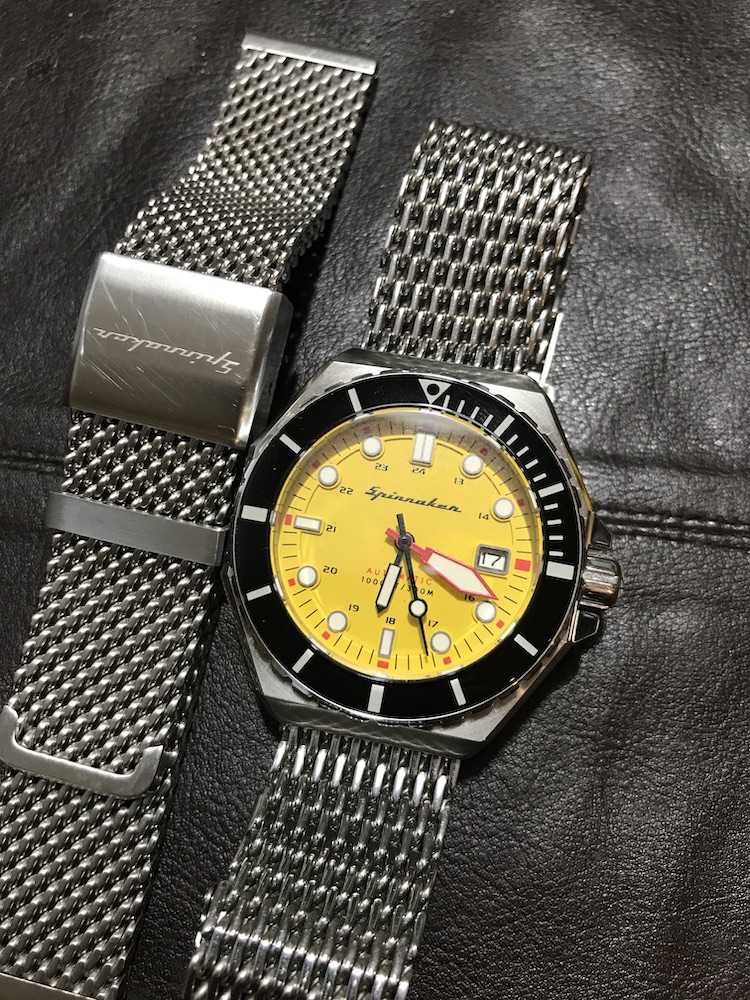 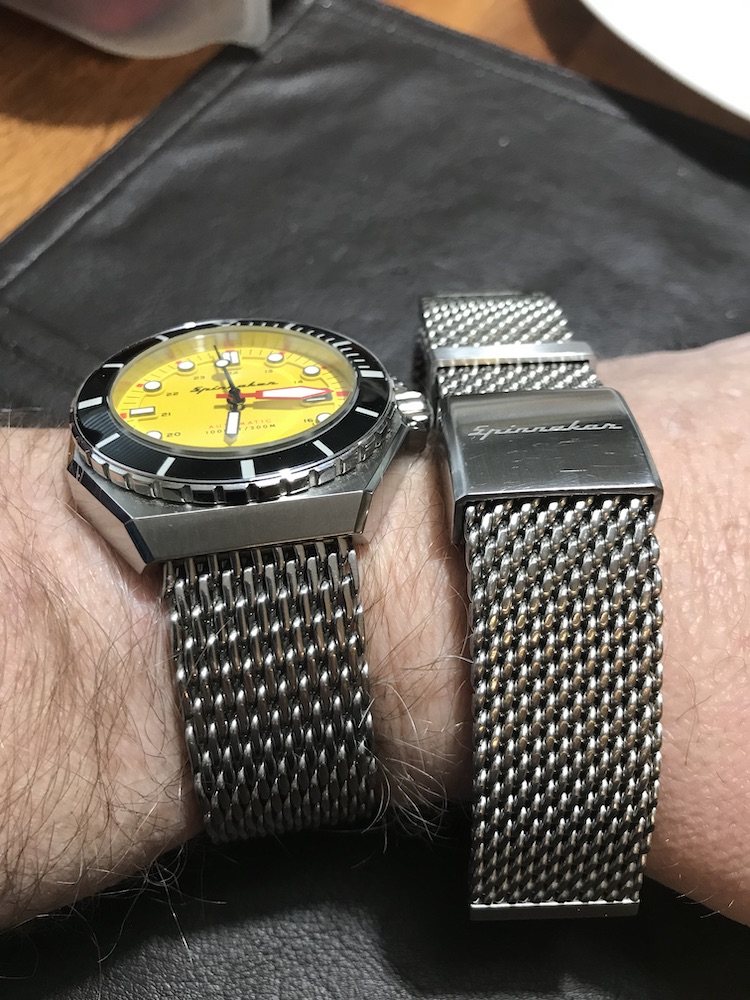 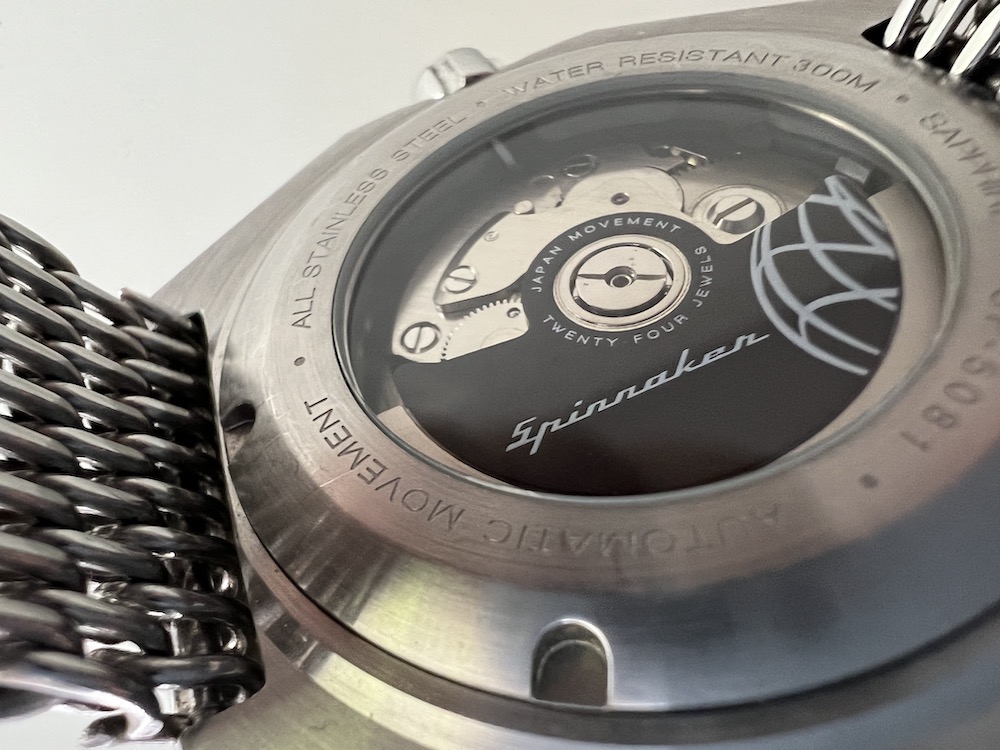 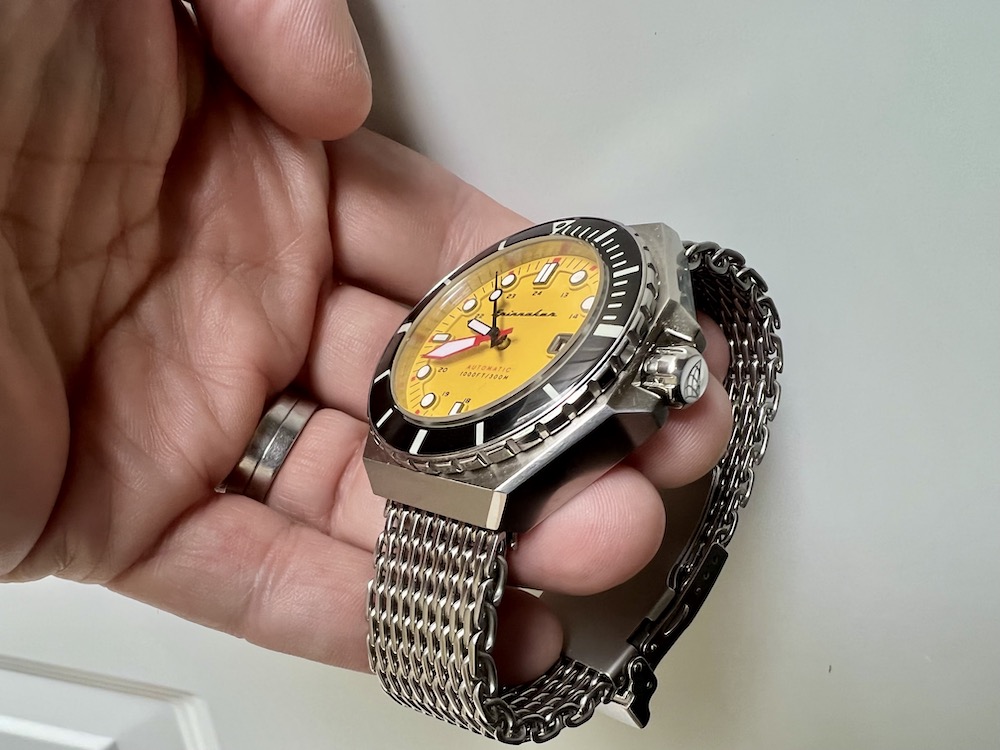 Before you criticize a man, walk a mile in his shoes. That way you'll be a mile away and you'll have his shoes.

Got the shade of yellow right, yellow and orange have to be BRIGHT. Ive had good luck with NH35s but John didn't get a boner so I guess Ill pass too.
NRPI here.

I have generally favorable feelings about this brands offerings, but why oh why would you name a watch dumbass? Is there some Jean Valjean reference here? I don’t get it. Does Marty Frankel have a hand in this? (Yes, I mean Marc, most of you are probably unaware of the stunning exploits of Marty Frankel, who made the entire slop crew seem like The Sunshine Boys by comparison,)

I meant Going in Style. Sorry, I get my George Burns movies mixed up.

I like the dial and the mesh band. Case shape, not so much.