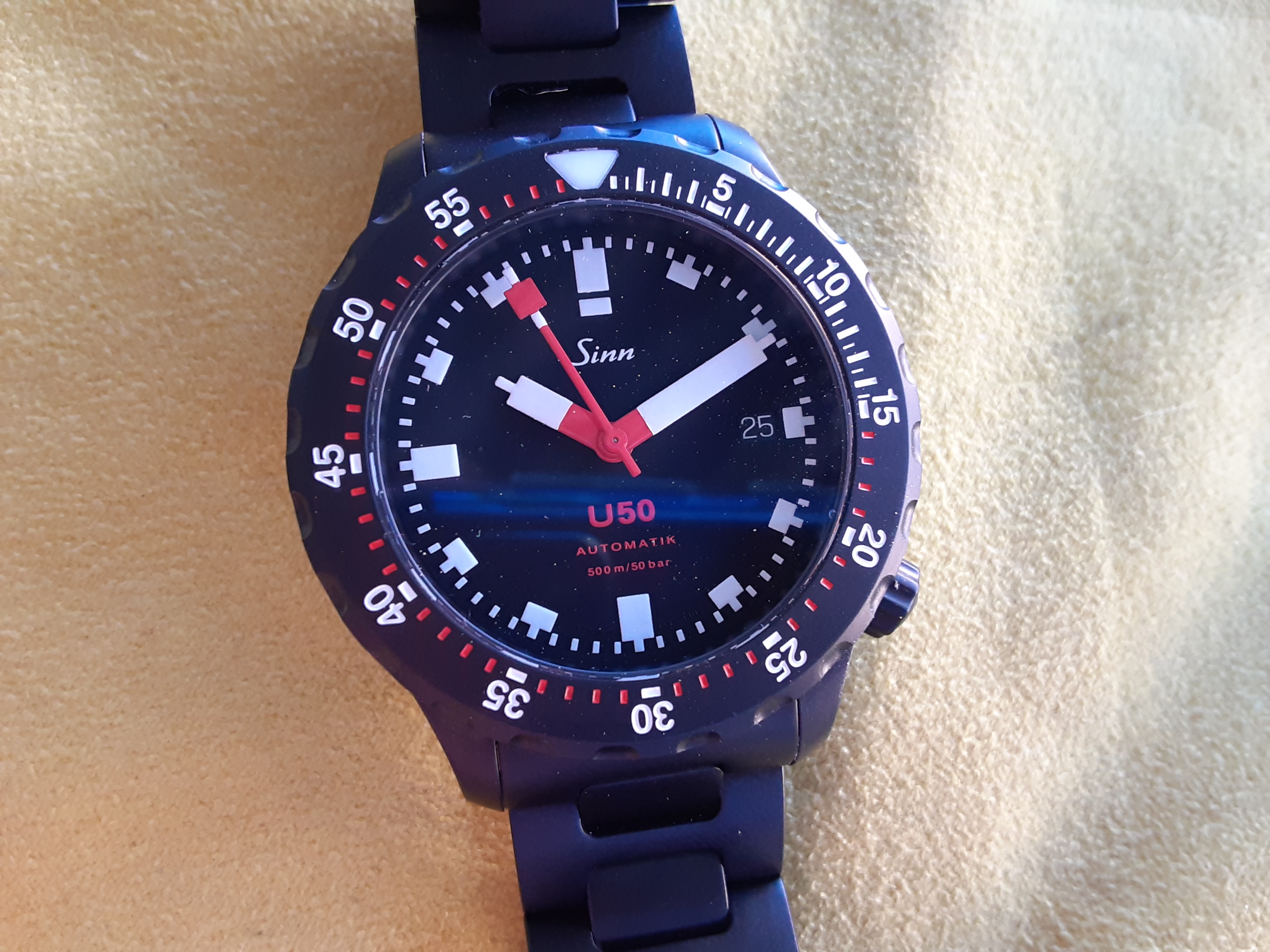 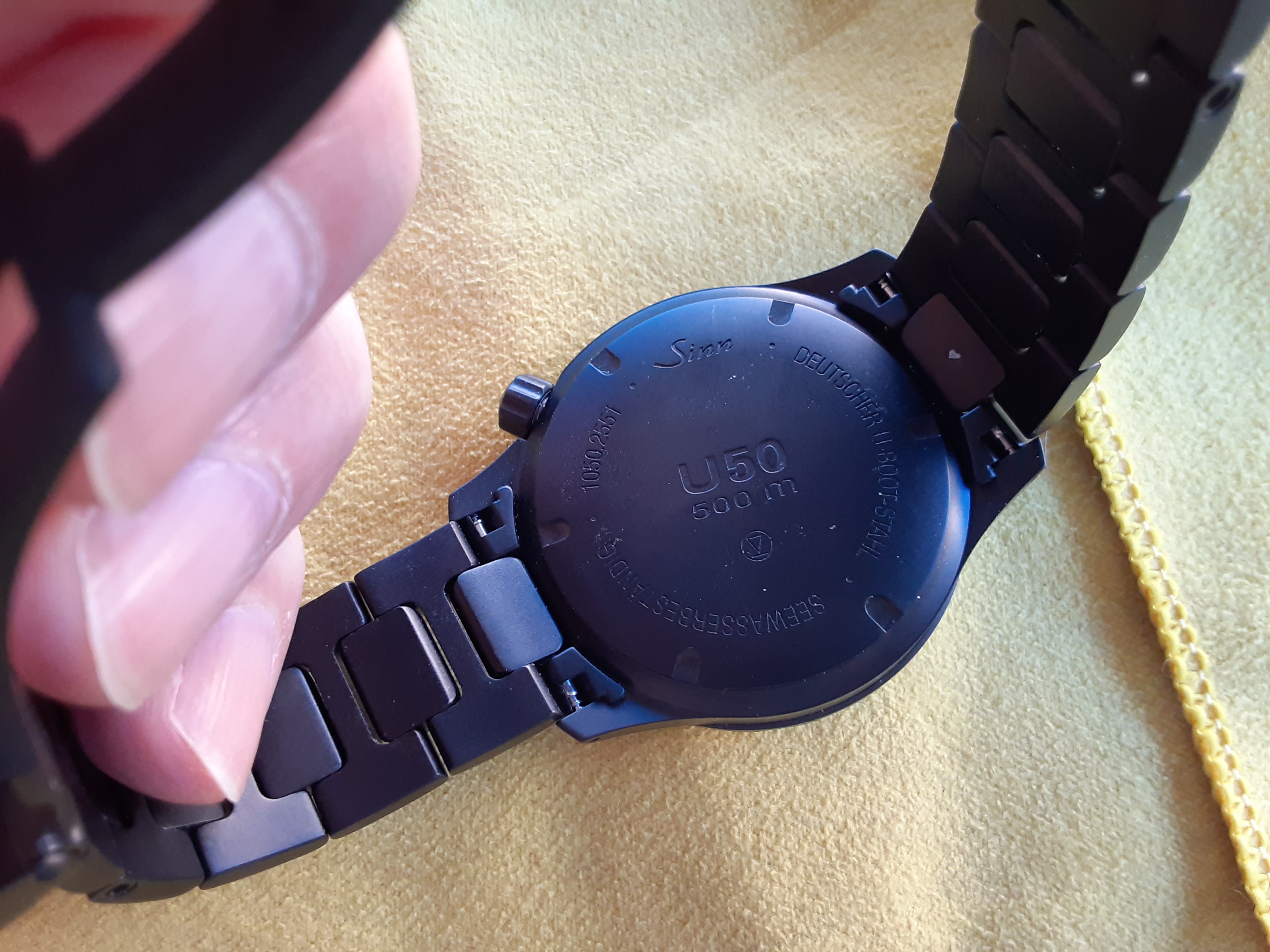 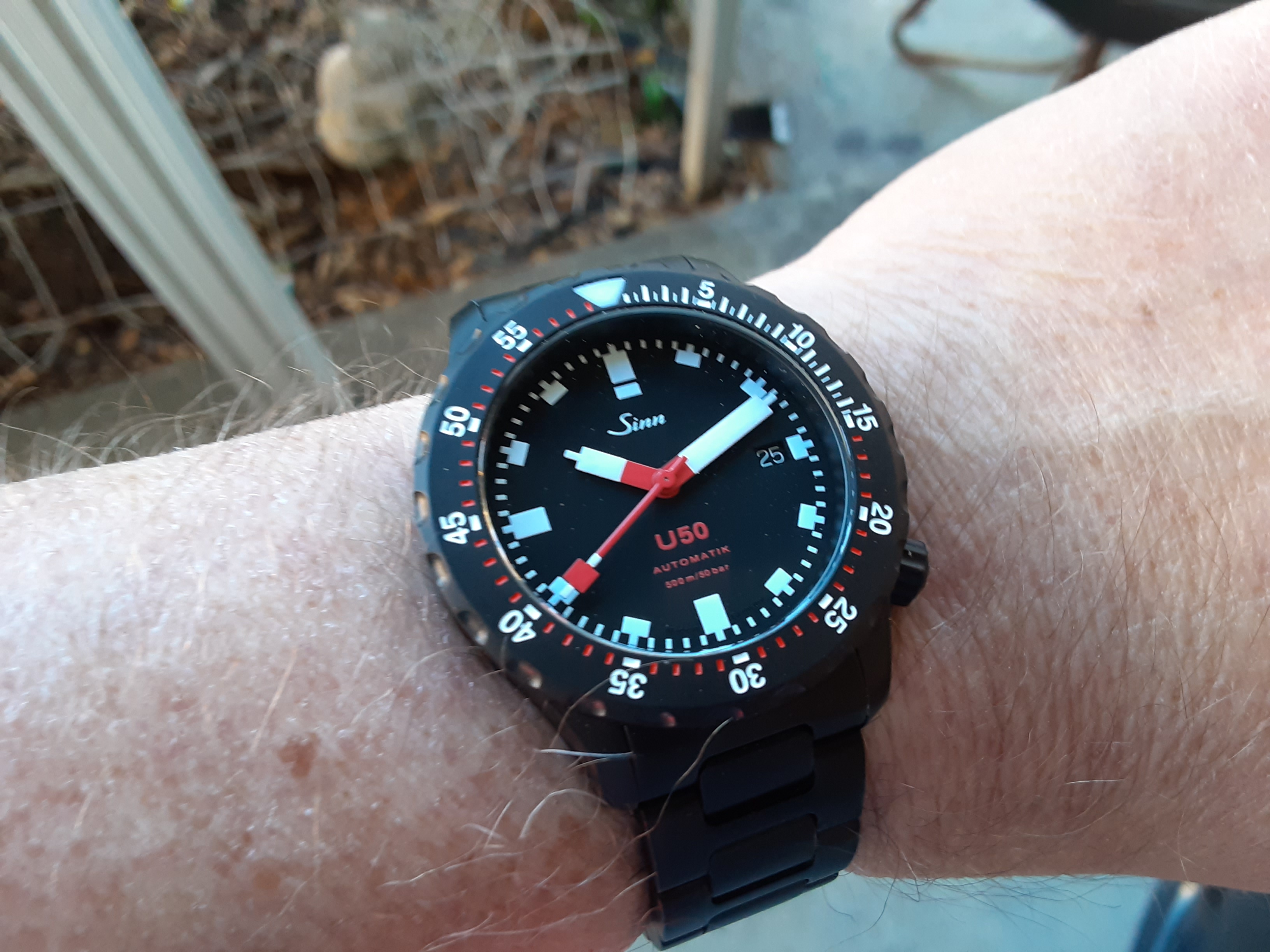 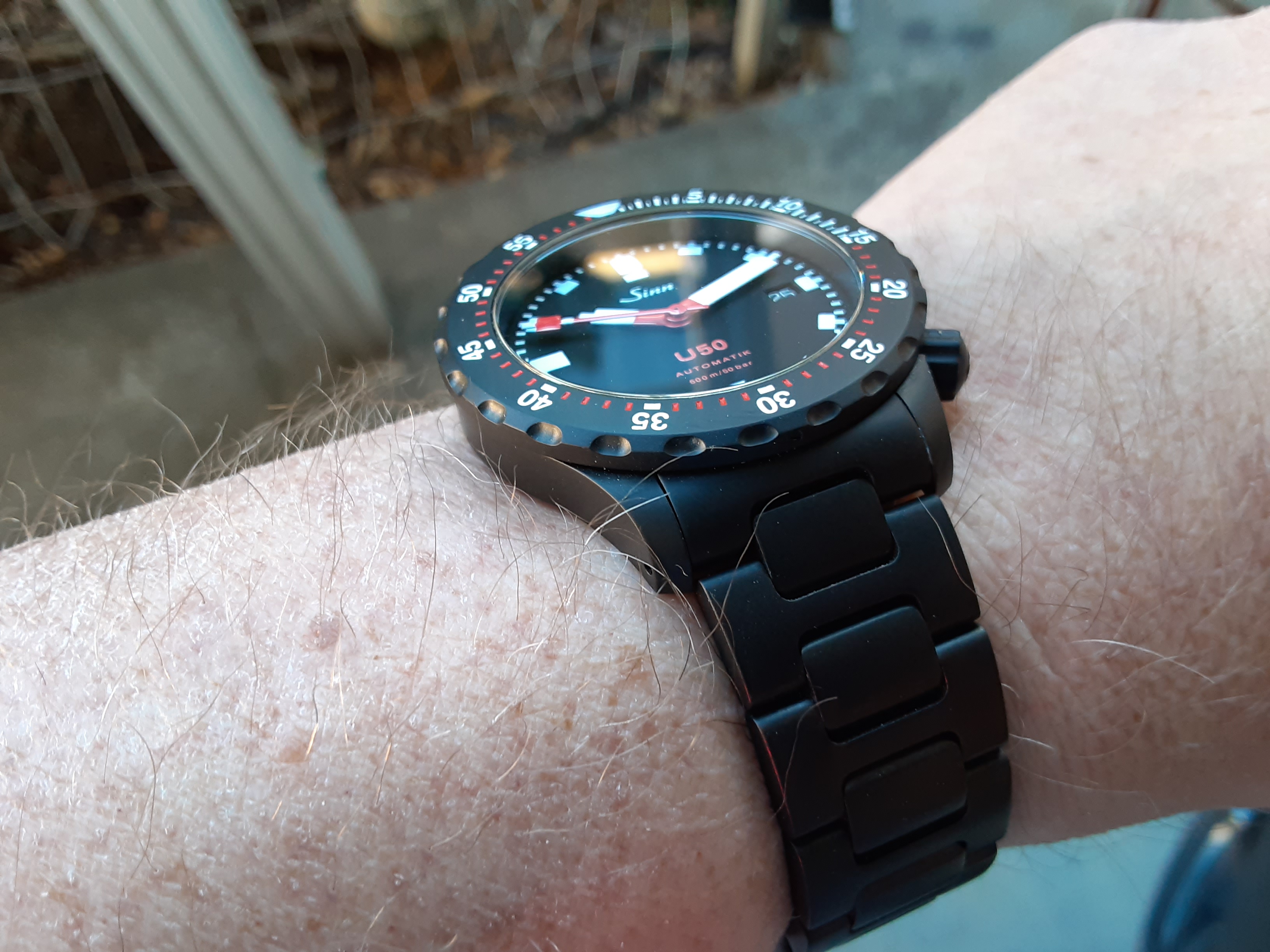 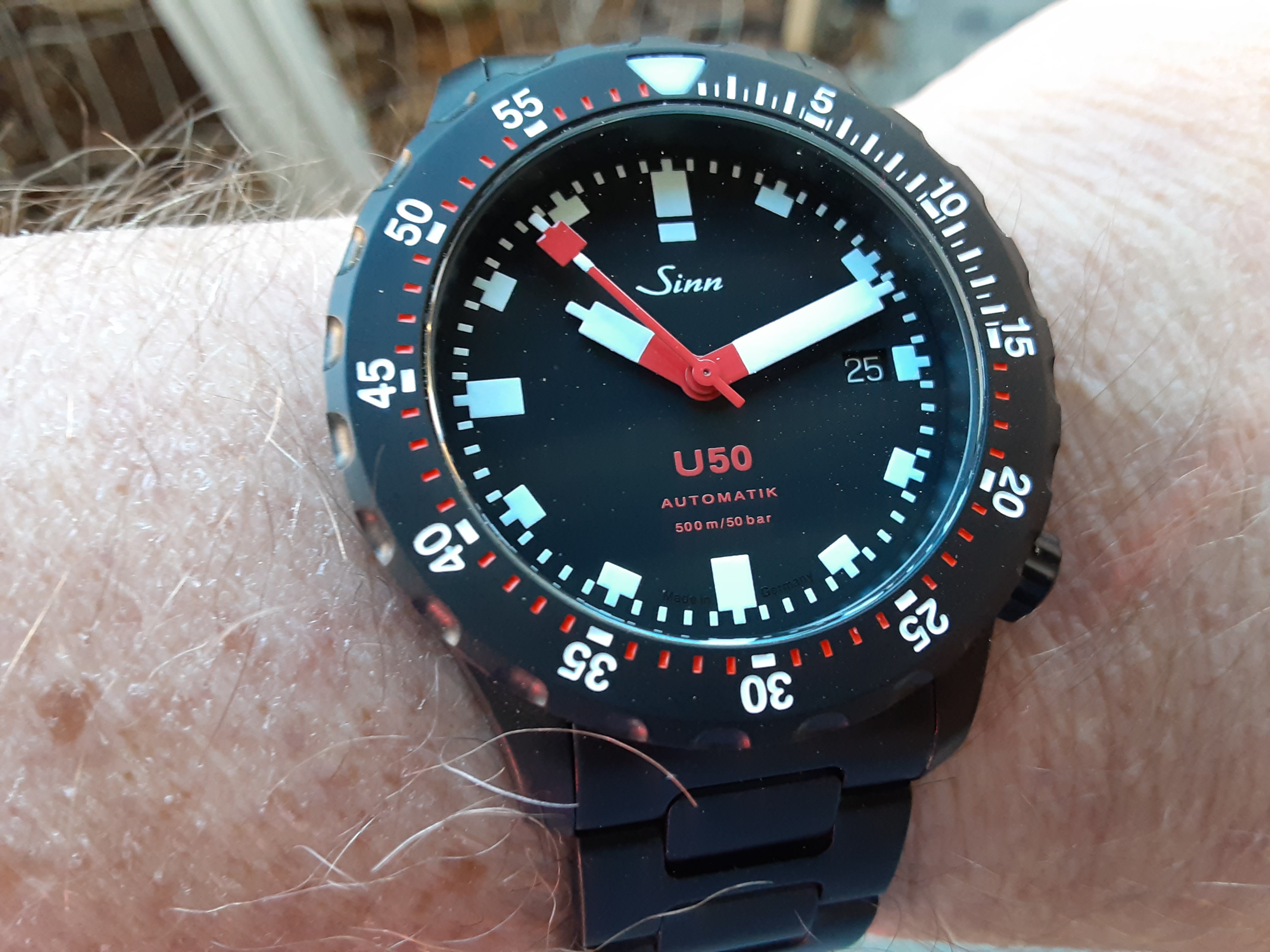 Nice, look forward to seeing it live in a couple days.
See you're WRONG I don't work at all, I'm a Democrat. The immortal Horse Feathers as spoken to Chucky Ninetoes.

That thing is pretty badass. Would look awesome on rubber.

Congratul... wear thatbadboi in goo... may the watchlords raise... amber ales... erections... and like that.
Copyright Reclinervision 2020 Productions. All rights reserved.

Does it have the tegemented steel and the hard coating? Look fwd to hearing about how you think the finish holds up as IDK if the tegement process improves the scratch resistance of the black coating as well as that of the steel. Have been looking for a black case / bracelet that I wouldn't turn into crap in a week or two as with previous misadventures.
^^^Copyright 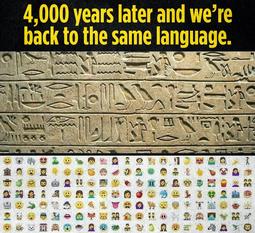 I bought this new from Watchbuys, which is an AD for Sinn. Interestingly, the last two watches I've paid retail for in the last, I dunno, five years (and probably more) were this one and the 105 UTC, which I also got from Watchbuys. (Both purchases were easy, and shipping was two or three days.)

The 105 really put the hook in me for Sinn; the build quality and fit and finish was unlike anything out there for around two grand. I always like Sinn's diver, the U1, but knew it was too big for me to take to. The U50 is shrunk down to about 41mm, and only 11.5mm think, or thereabouts. This model has the full tegimented case and bracelet, which is some Nazi alchemy that makes the metal five times harder than regular stainless steel. They've also used a (hopefully) improved PVD coating, meaning the watch should be pretty hard to scratch. The movement is a Selitta SW300, which is a clone of the ETA 2892, which also helps the keep the case squat.

Having worn it for the past three days, the movement is dead on. The watch has some weight, but the bracelet is excellent, 20mm at the lugs and tapering slightly to the clasp, which is nothing much to harp on. The bezel has a nice one second click to it, with no backplay.

One of these days I might get around to doing a full review, but so far, this is an outstanding watch.

One of the coolest handsets out there. Can't recall ever seeing a Sinn I didn't like.
Copyright Reclinervision 2020 Productions. All rights reserved.

The super scratch resistance of the case doesn't seem to matter much if the coating doesn't hold up. I'd like to pick up a cool black chrono and Sinn has some very cool ones, but I knock my watches around pretty good. Hopefully Sinn is on to something with the hard PVD coating, whatever the hell that means. I haven't been able to find anything definitive - look fwd to your opinion.
^^^Copyright

I'm envious and I'm looking for rocks to throw. Why? "Let he who is without Sinn cast the first stone!"
Dies mei sicut umbra declinaverunt

I actually snuck this watch around my wrist Tuesday when conj had yet another mug of beer in his face.......... and FTR, pics do not do it justice.
It is a really sweet watch !!

I once said if I could only own one watch that would be the one.
NRPI here.