And for the second time, I've picked up a watch from the reward program at work.

As what it is was revealed in the previous thread, where I left you all guessing (until you've guessed right), now just let me properly introduce it to you.

In the parcel I got at work today, there was this: 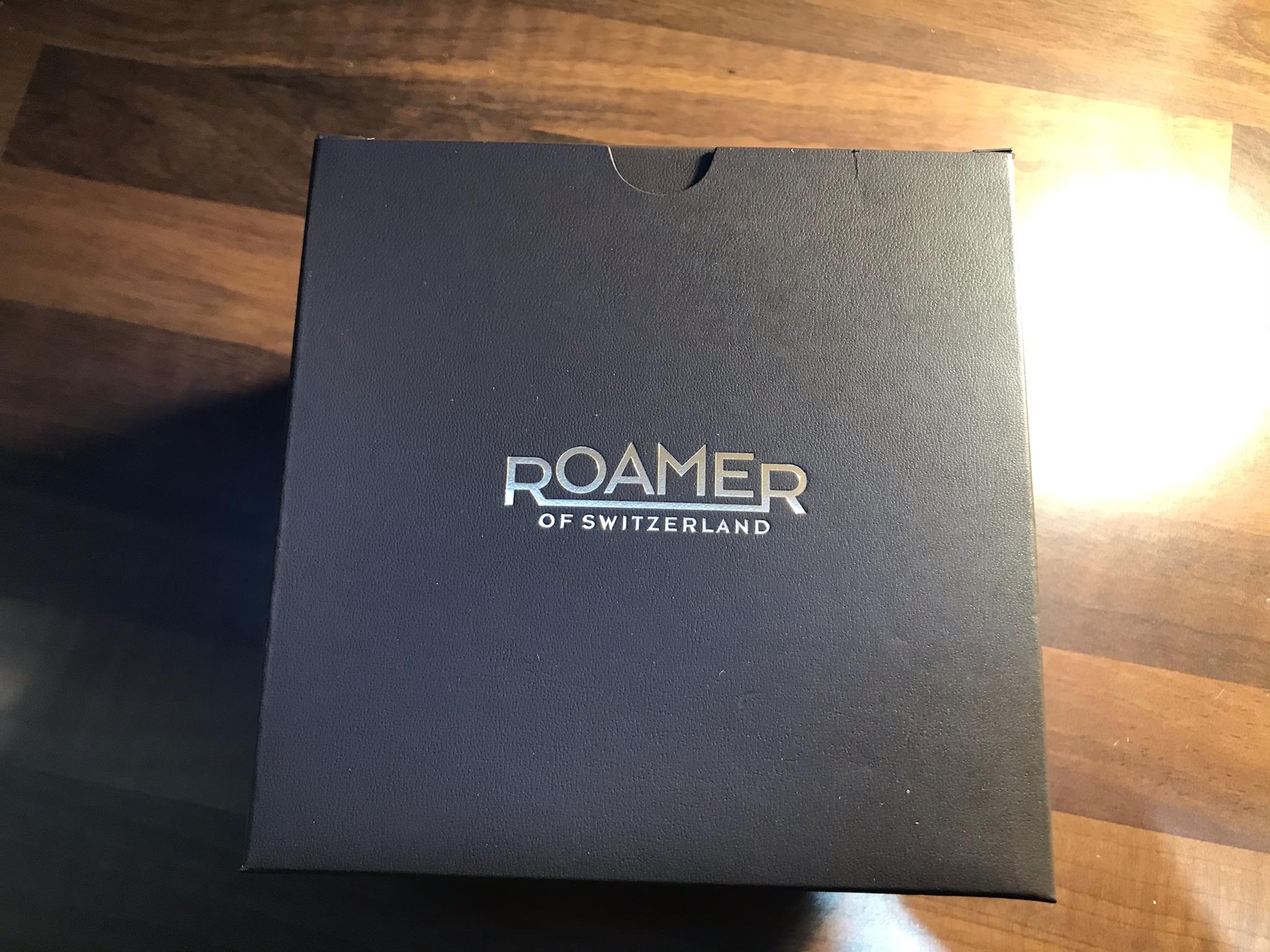 In this, there was this: 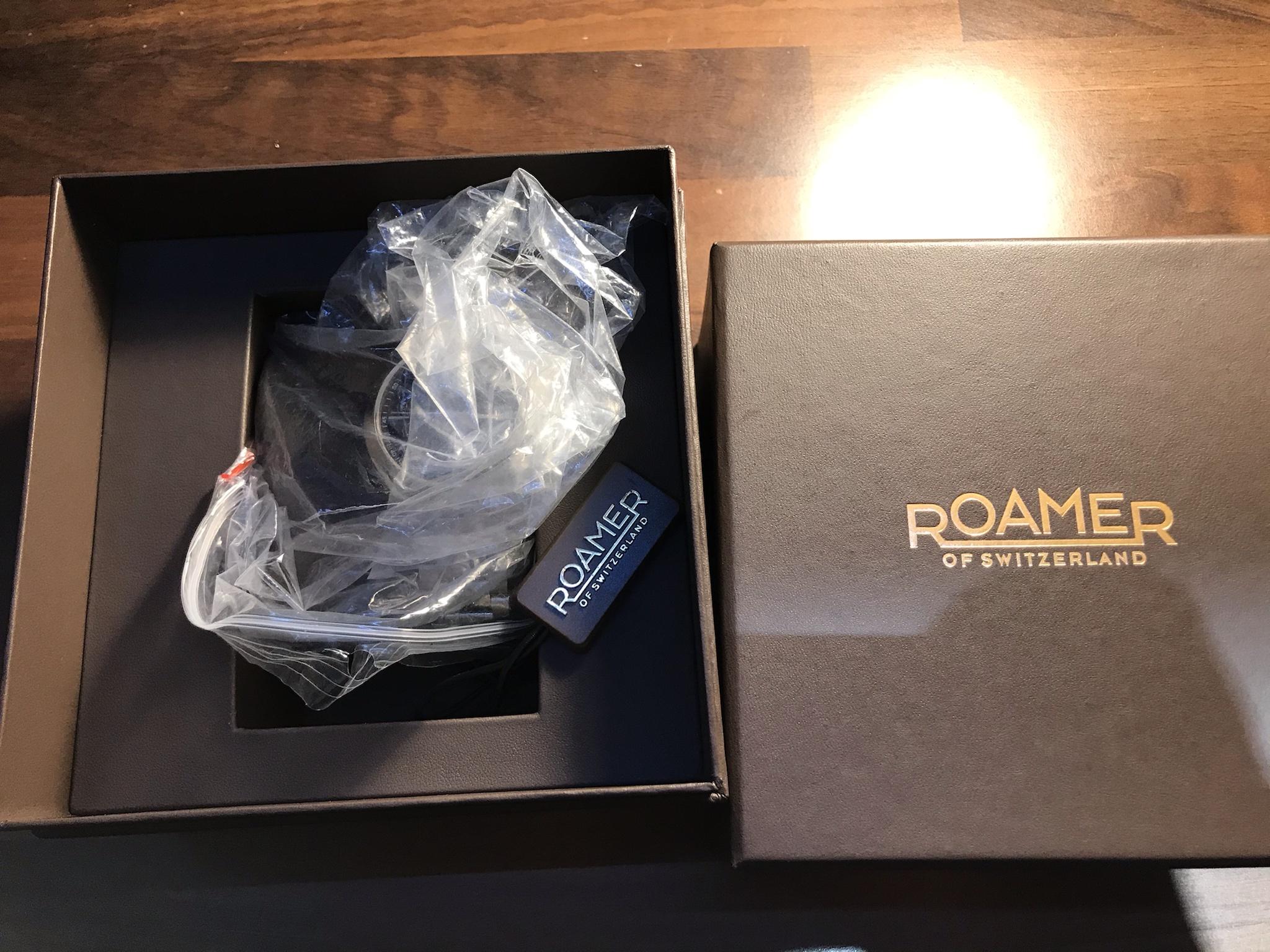 And under the wrapping, this: 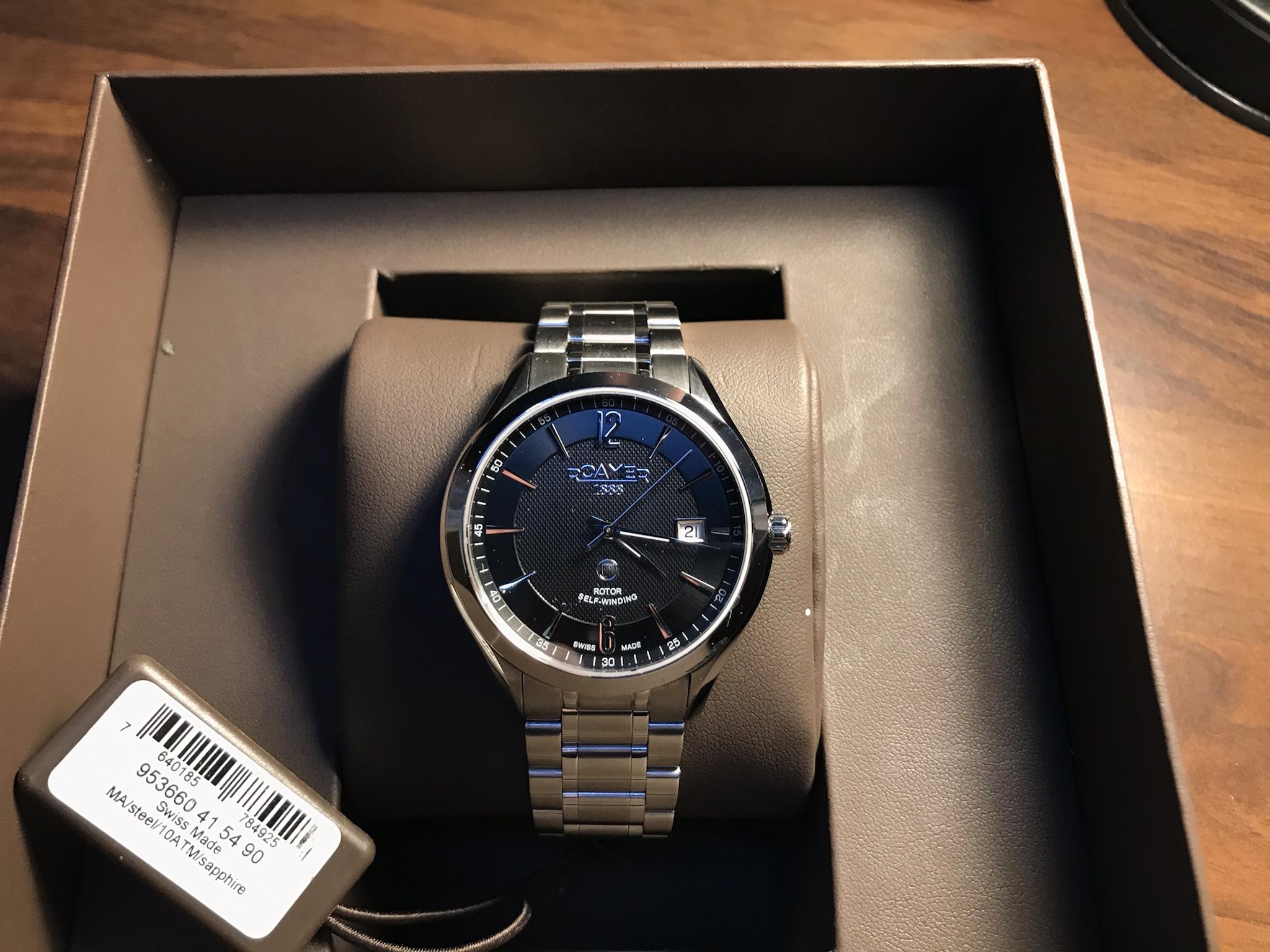 This, lads and lasses, is the Roamer Mechaline Pro. I know it's a pretentious and pompous name, so much so as to have some Wagner playing in the background. Not that I mind, I like Ride of the Valkyries and Siegfried's Funeral March.

Here are some dry figures, should you give a fuck about them:

The watch itself makes a really good impression. The case is almost all polished, with just some brushing on the inner facets of the lugs. The edges are nicely finished. Same goes for the applied features of the dial - the logos, the date window, hour markers and hands. That's really something.
And the dial. Fuck, that's nice. Guilloche in the centre, semi-matte on the ring around it, the outer edge has a circular pattern to it.
Aaaaanyway... 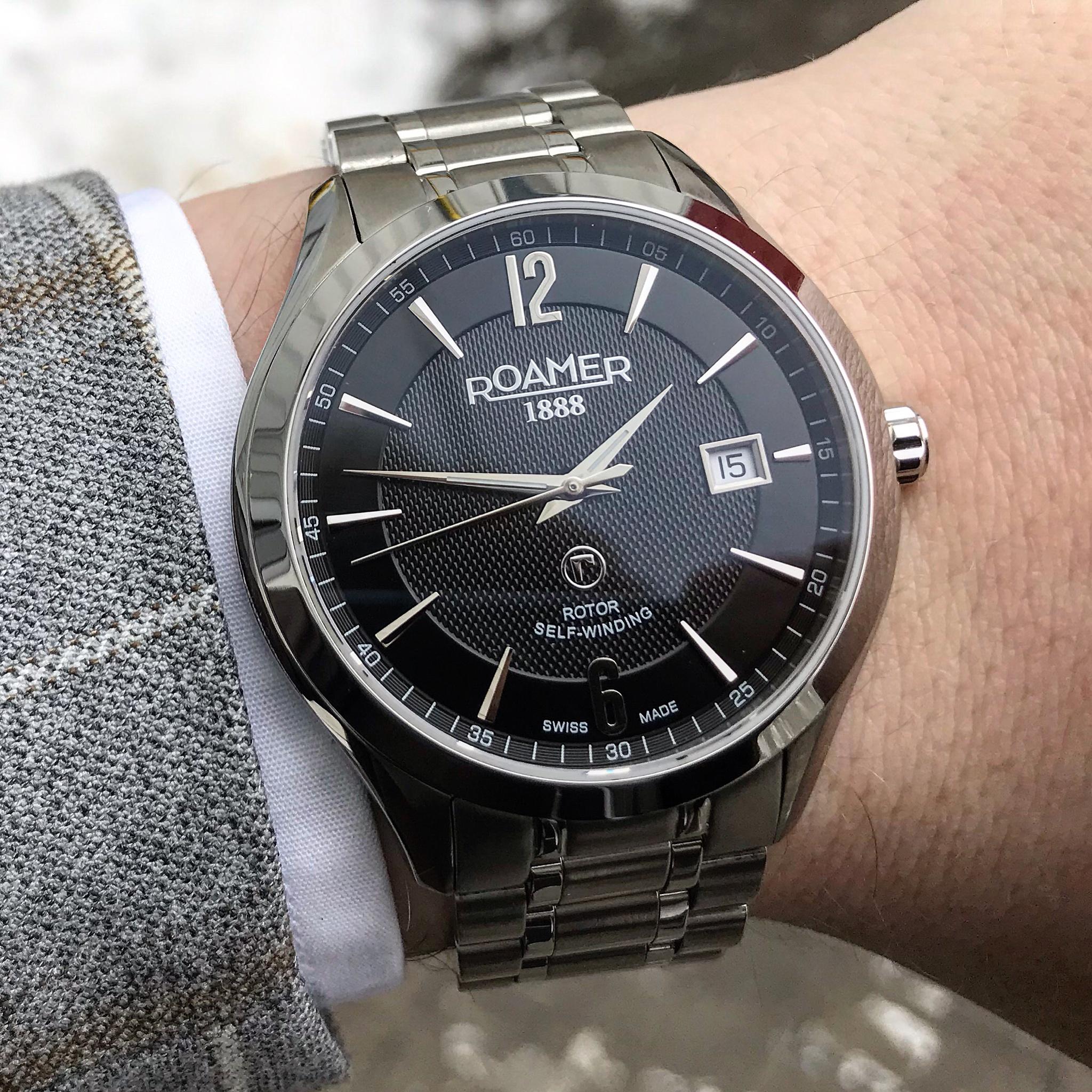 I must say that I have my concerns about the movement. My good friend, a watchmaker, had issues with the keyless works in his Zodiac's STP movement. It quickly turned out, that it wasn't just his watch, and the flaw is rather common. For whatever reason, the STP 1-11 seems to have rather fragile keyless works. It beats its origin, the ETA 2824, in terms of finishing in corresponding grades, and in terms of power reserve. Alas, whatever was done by STP to the keyless works, has reduced their resistance to shocks.
I'm used to wearing non-shockproof watches, and I'm generally a cautious fellow, so I just hope that it isn't a light knock that can fuck this one up. 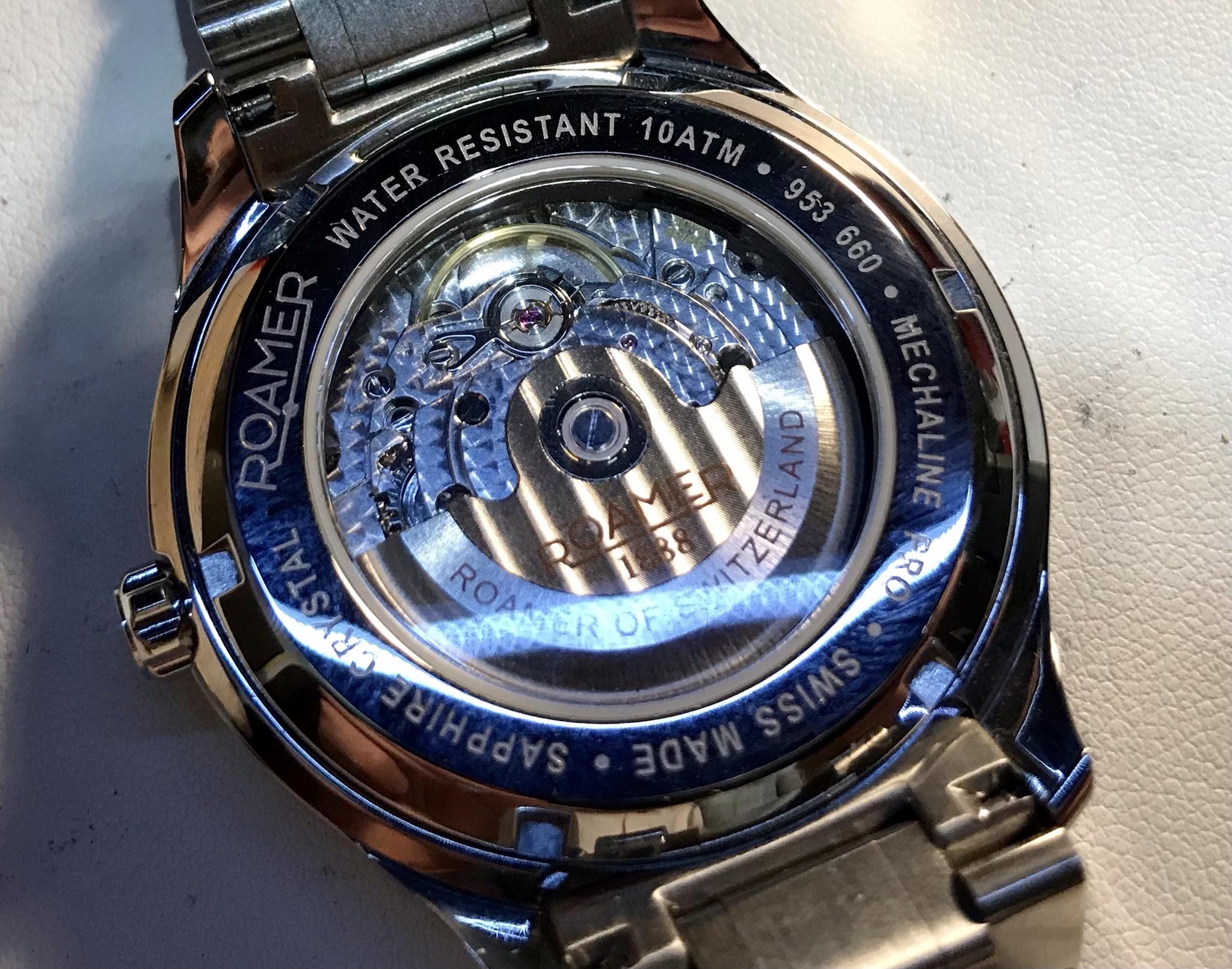 The movement is really nicely finished, I'll give it that. The perlage all throughout the plates is great to look at.

Now, let's talk for a while about the bracelet. It's not uncomfortable. Hell, it seems really well made. Alas, it follows the unfortunate trend for using a butterfly clasp with twin-trigger release as a means of obtaining a more "seamless" appearance. 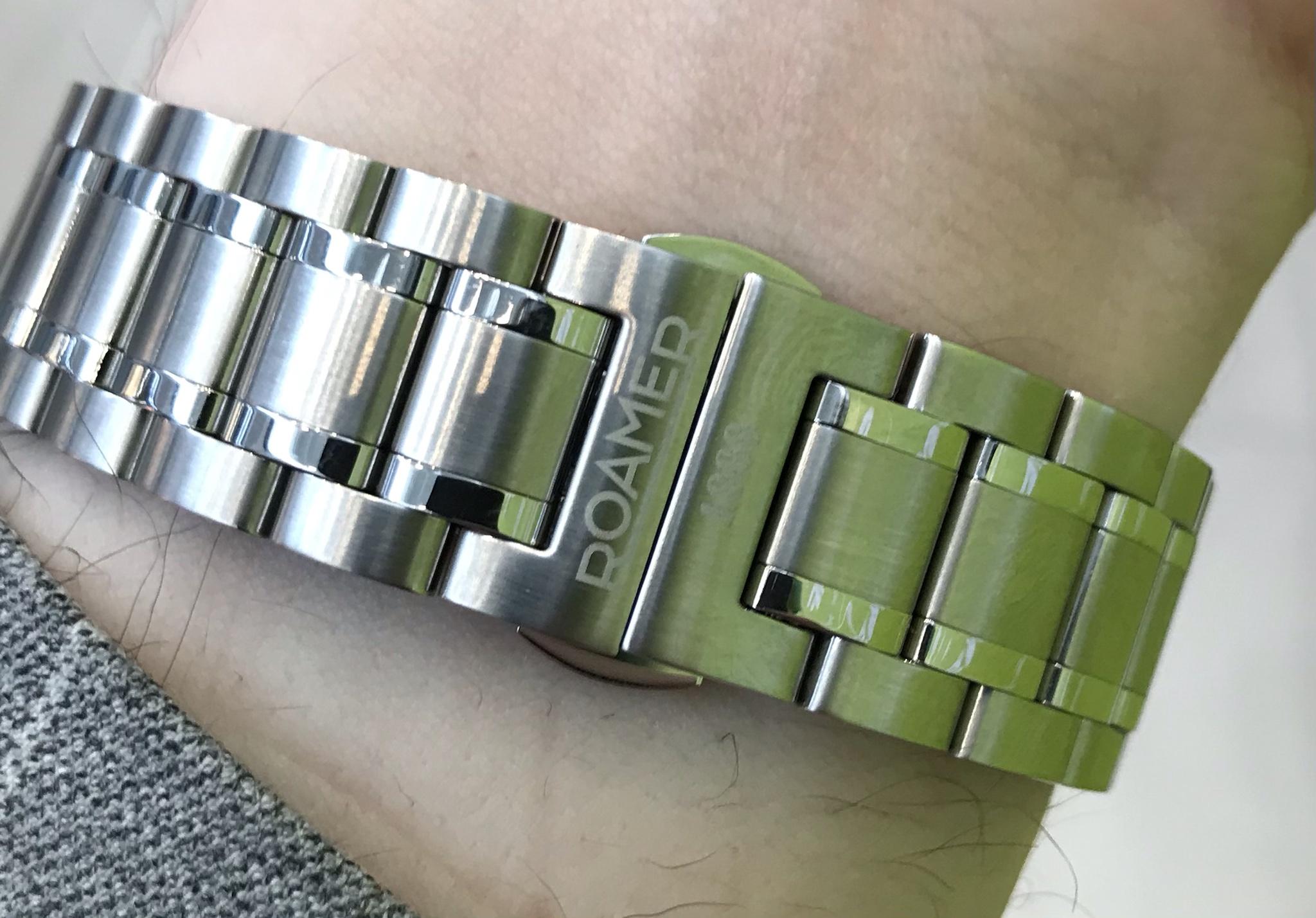 You know what? Fuck that shit, that fucking clasp. This thing, only today, has opened by itself at least 7 fucking times, then I lost track of that. Fuck! No! Just, no.
After a day, I feel like I'm done with that bracelet. Really. Fucking butterfly clasp. All it takes is for the watch to slide down towards the palm, then bend the wrist only a degree too far, and...woo-hoo, the watch flies down to the fucking elbow, and thank Jove it didn't fly right to the floor.

I heard of the same issue appearing in watches by scores of established brands. That, I reckon, means that Roamer isn't really guilty of getting it wrong, but it sure as fuck is guilty as charged of using this solution at all.

As soon as I get a nice strap for it, that bracelet can go fuck itself and collect dust in the box.

Don't get me wrong. It's a lovely watch. The moment I get that strap - probably taupe, it'd look lovely on a taupe one - I predict that this one will spend a lot of time on my wrist, because apart from the bracelet, this watch really deserves the wrist time that I intend to give it.

Mr. Bloke out.
I always hope for the best. Experience, unfortunately, has taught me to expect the worst.
Elim Garak, Star Trek: Deep Space Nine

It is super! Congratulations. I bet it is more durable than you think.

She's a beauty MK, loving that dial so much depth with the complimentary finishes. The bracelet would be a great choice if as you said the clasp would stay shut. I'd slap her with a nice piece of leather before that clasp opens at the wrong time. Maybe you can change out the clasp to something more secure and still keep the rest of the bracelet?

That's a nice watch Mr Bloke. I don't know much about Roamer but it sounds like they (mostly) do a good job. Shame about the clasp, but I agree it will look great on leather. Taupe would work IMO, or even charcoal or straight black.
Copyright Reclinervision 2020 Productions. All rights reserved.

That is cool looking. Looks good with that suit too.
In memory of TB/Phfluff, since he isn’t here to continue to give his praise, I will share it for him.

I loathe butterfly clasps, too. May be pretty bu leaves zero room for wrist size changes through the day.
My best friend from college shared his secret to his huge financial success, "I fell out of the right vagina."

Very nice, MK. I was looking forward to this one.
"Funny how things that start spontaneously end that way. Eat a peach." - Neil Young

The bracelet, not so much. Hate those clasps, and no half-links either?
Randy in Nashville

That is a right nice watch!

Struggled just yesterday with a butterfly clasp and a bracelet with no half links. Ive had one or two that were great but for the most part they suck.
NRPI here.

As for the bracelet, indeed it has no half-links. This means that not only it's a piece of shit that opens on its own, it's also a piece of shit with a rubbish adjustment capability.

I was thinking that I might get not even a strap, but some nice mesh for it. Dunno yet.
I always hope for the best. Experience, unfortunately, has taught me to expect the worst.
Elim Garak, Star Trek: Deep Space Nine

Nice pickup Bloke, mesh might be a good choice.
To disarm the people is the best and most effective way to enslave them. George Mason

Found this old photo of the only roamer I ever owned back in 2013. 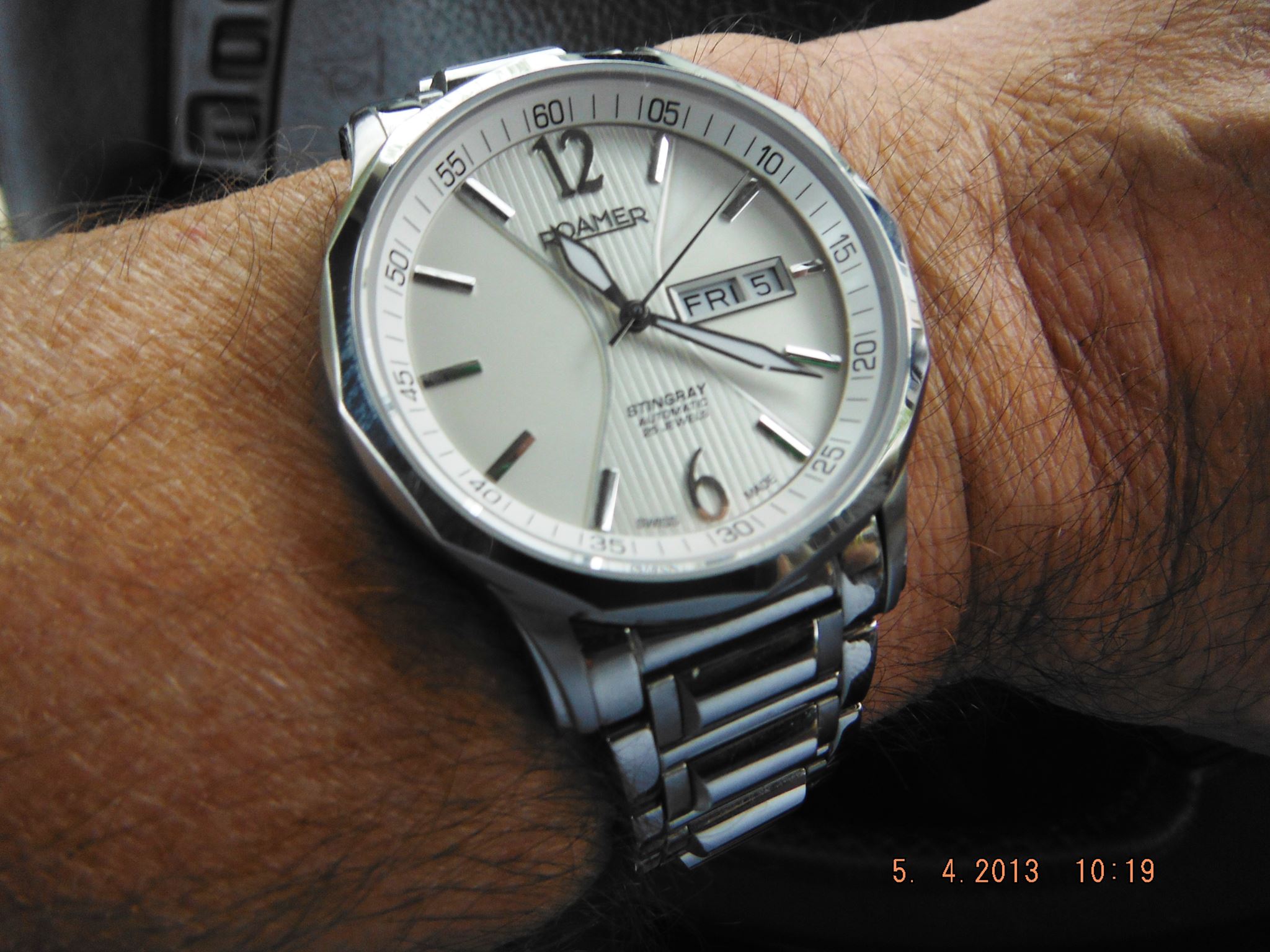