Got these two weeks off, had to use up most of the holiday I have when the weather's still warm. So, today I got a text from a colleague, that the Citizen I've been waiting for has arrived. Drove down to my workplace, and picked it up. And...this might be just the most loopy watch I've ever had. 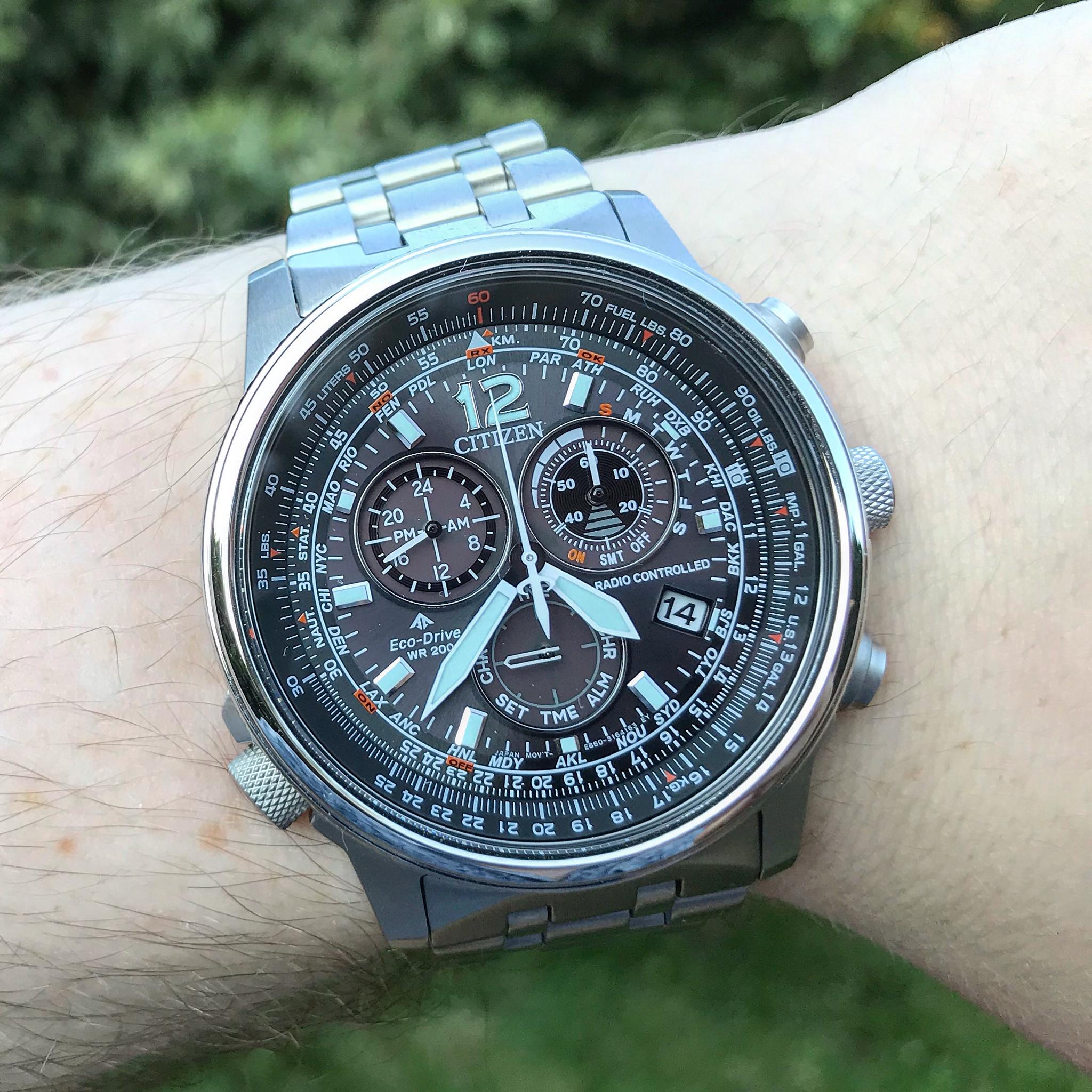 First, the technical side... This big motherfucker is powered by the E660, introduced sometime at the beginning of this year, replacing the E670 and supposedly improving on some of the E670's functionality, not that I'd know if the E670 needed any improvement - I simply never handled a watch with the E670. It has more bells and whistles than I could possibly need - chronograph, perpetual calendar, quick time zone switching, alarm, Eco-Drive, and of course the Radio-Controlled system, synchronizing this rig with the nearest atomic clock, in this case that being one located in Germany.

The weight of the watch is not fucking light, but not too fucking heavy, the Citizen website doesn't provide it, but since it feels alright, the fuck do I care about that...
The bezel diameter - and thus that of the case along the 12-6 axis - is 43mm. With the crown/pusher guards, it's more, but these aren't of any particular significance. At 14mm, this isn't a thin watch, either. The lug to lug is a hair above 50mm, which isn't little, but it's well within my limits. All in all, wears pretty fucking well, as the pancake-flat case back distributes the weight nicely.

The bracelet's fucking heavy, but at least it's held together by cotter pins, not the dreaded pin-and-sleeve system. 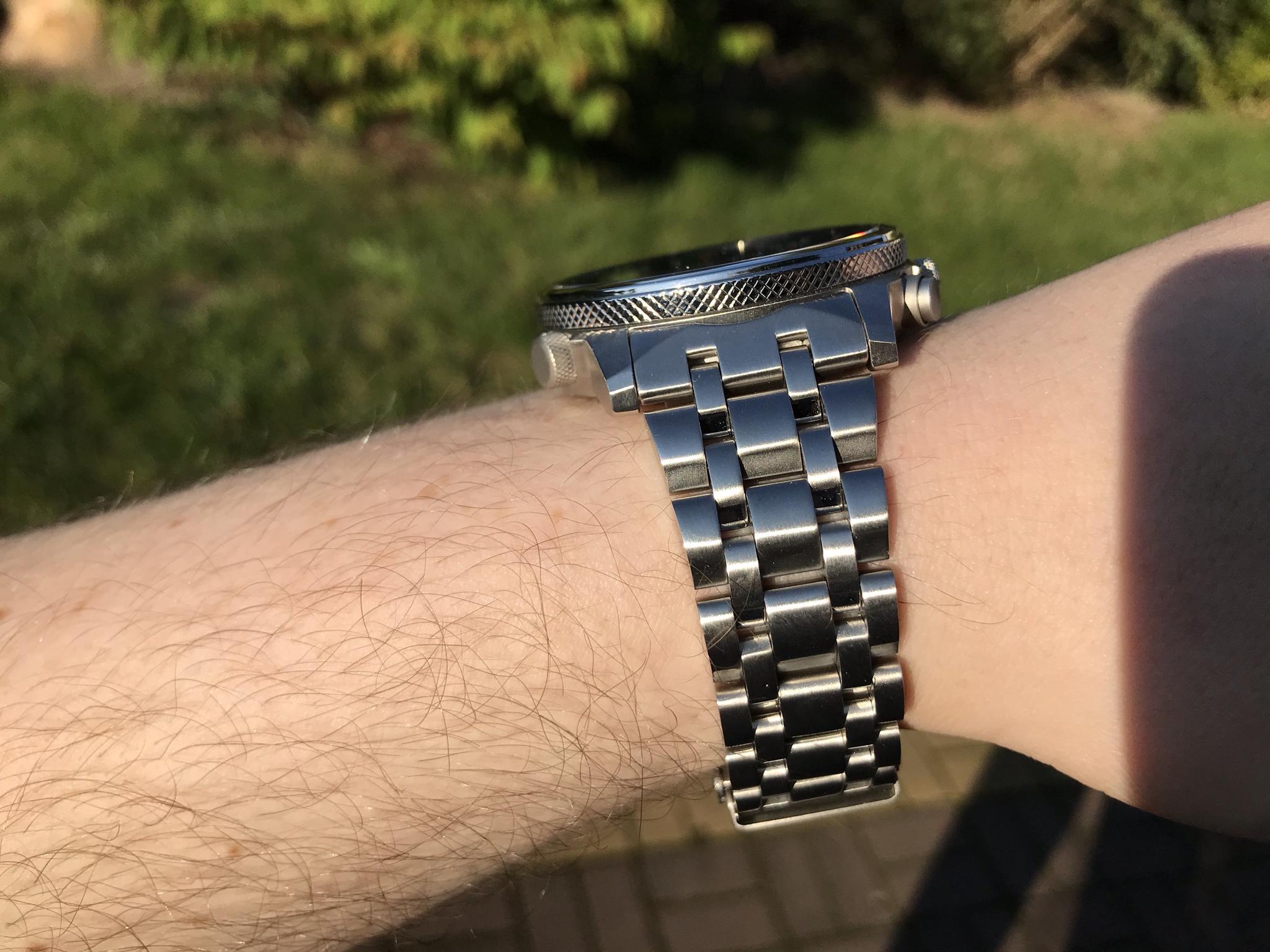 Here's the clasp - twin-trigger release, with an additional security latch. Looks somewhat uninspired on the outside, however it's a pretty solid, milled build, so it's OK. 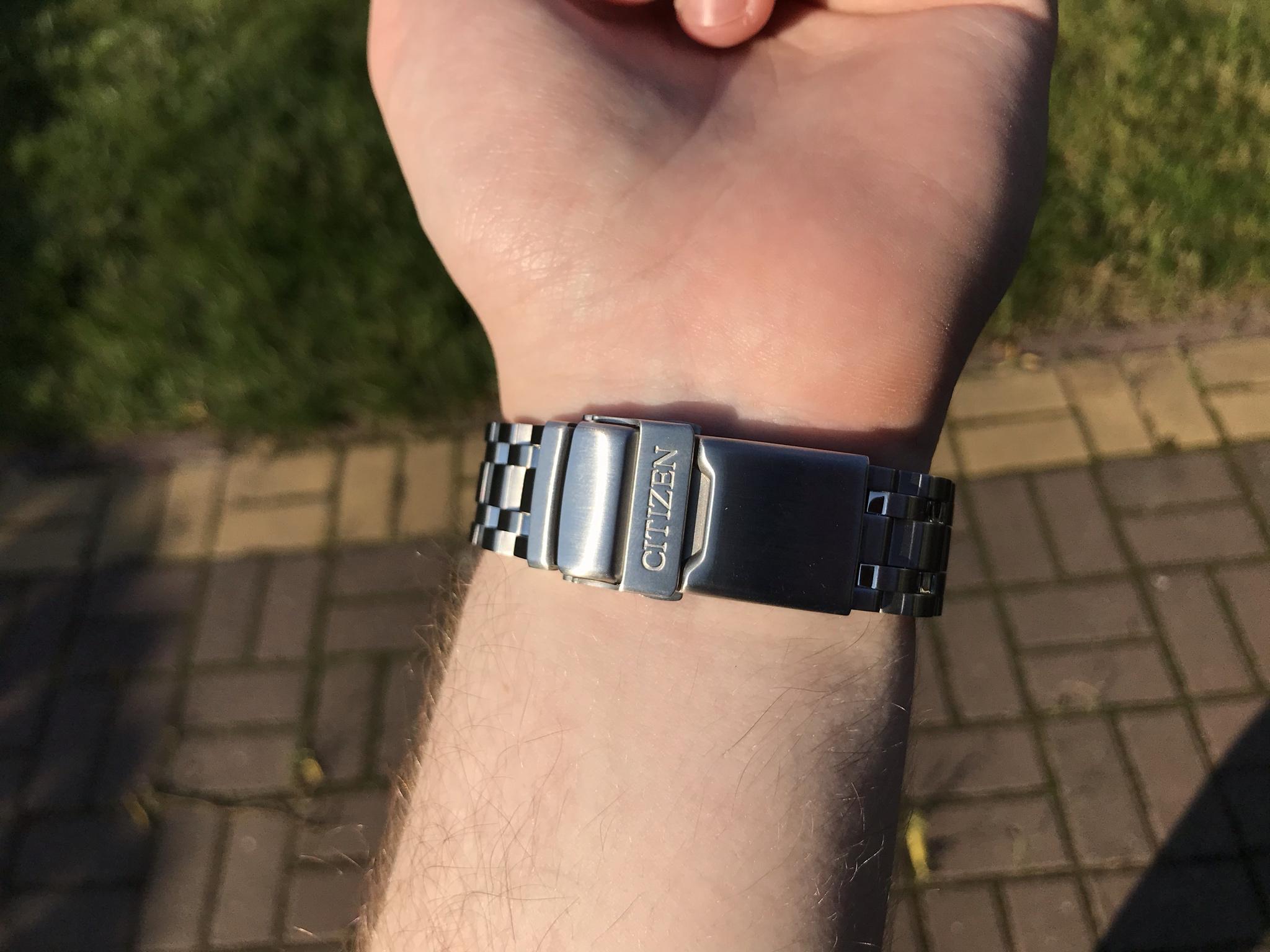 The case finishing is great - except the bezel, all brushed, with well-finished edges. And it has plenty of tyme knobs.
Even with all them tyme knobs, none of which are screw-down ones, this beasty has a 200m WR rating. 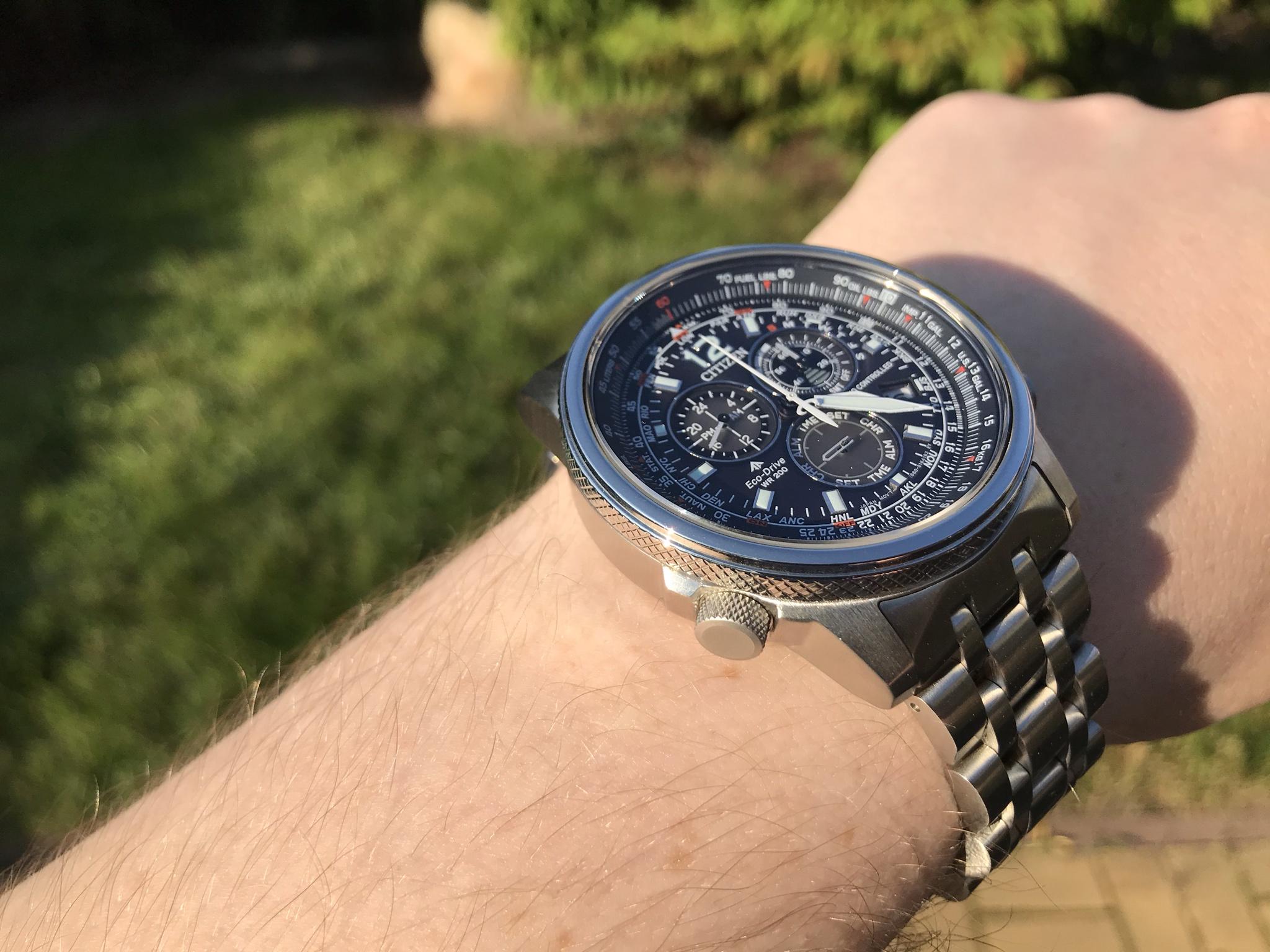 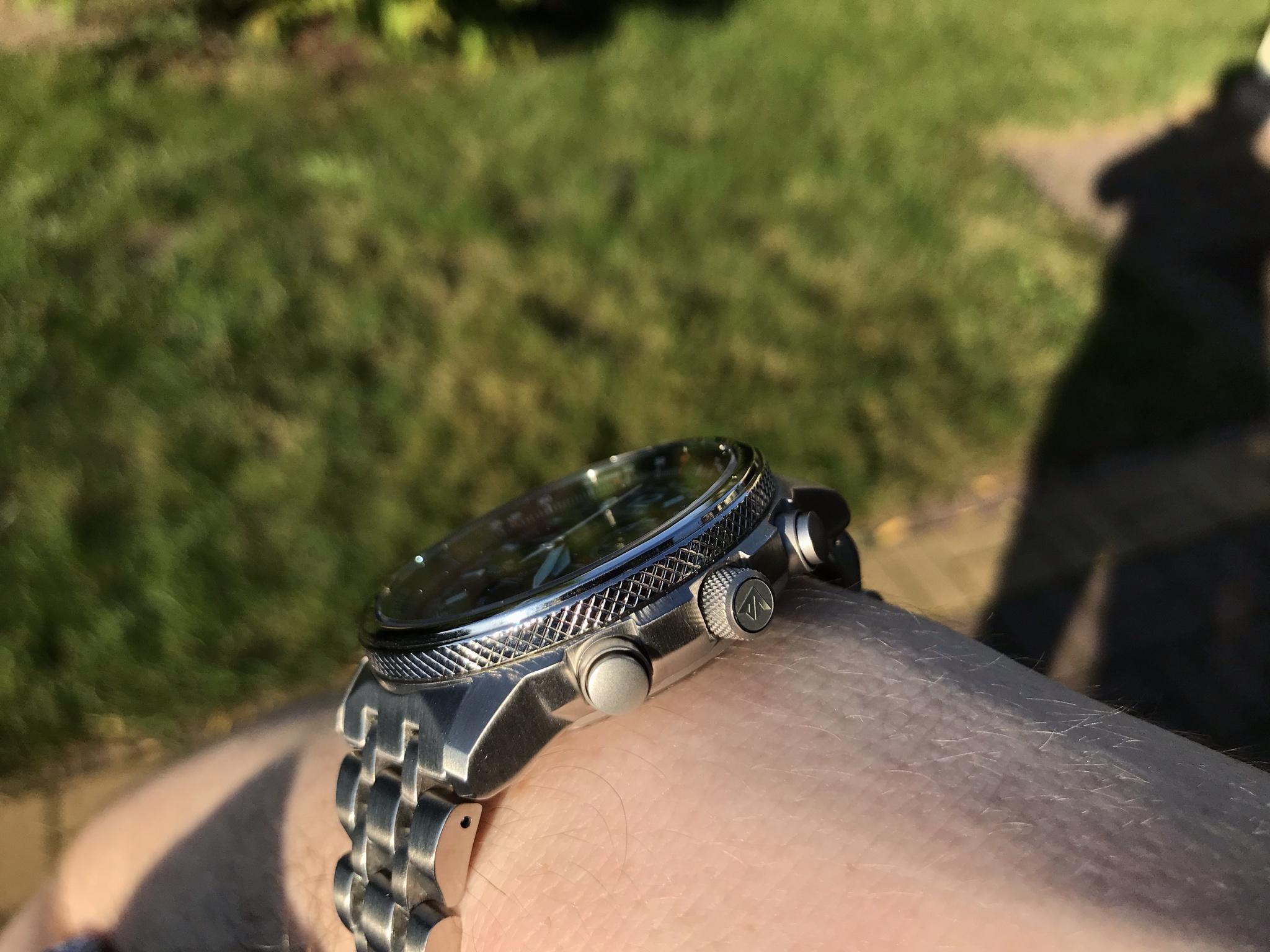 In the pictures on the Citizen website, the dial looks black. In reality, however, it's a deep, warm graphite grey with sunray finish. Fuck, that's gorgeous. 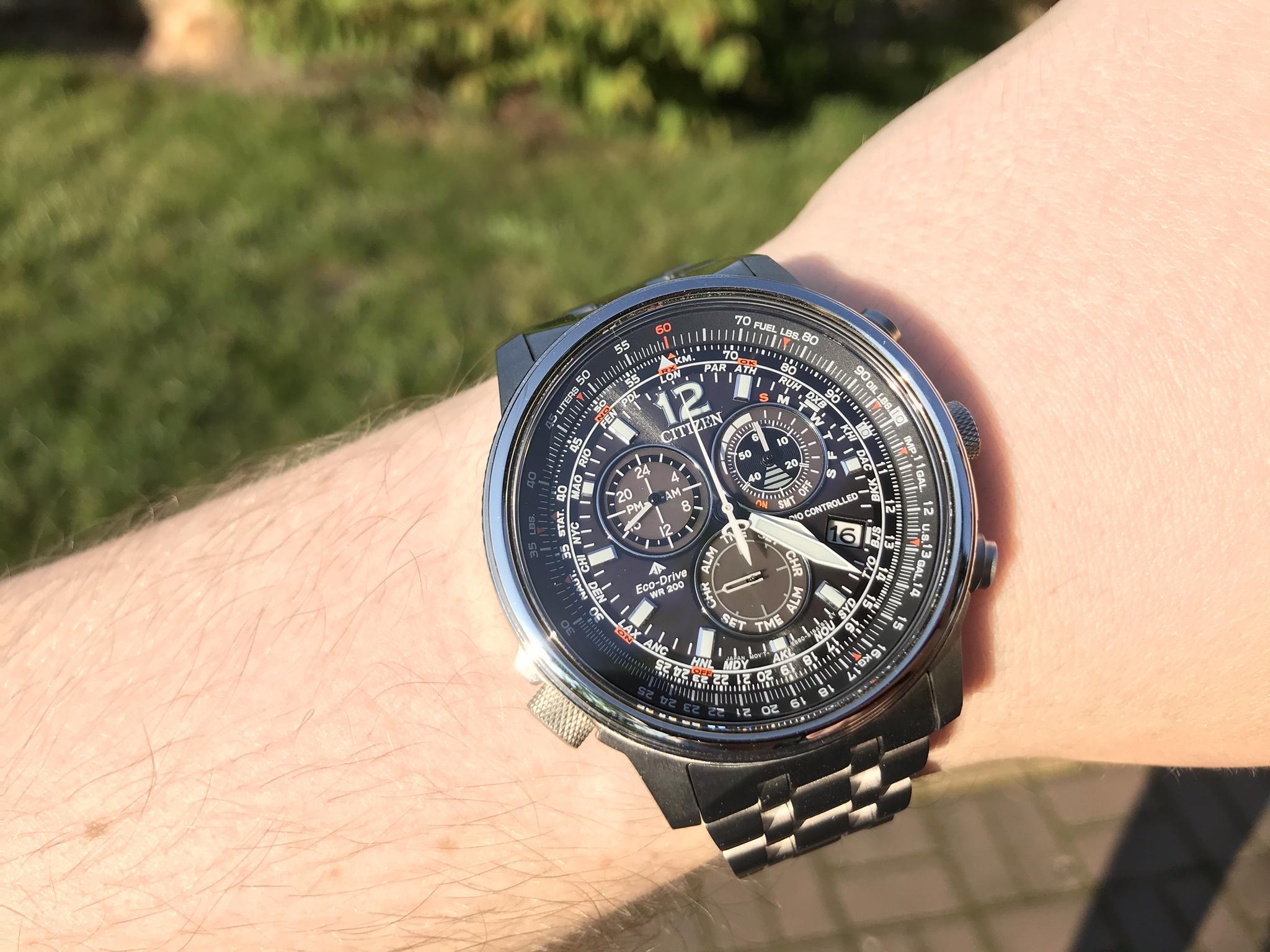 All in all, I already love it. It's just so unlike anything I had before. That's the sort of thing that'll wake one up, serve as a kitchen timer, can be worn at work, and then it'll be the perfect companion on a trip, no matter if you're flying halfway across the world, or just driving out of town to spend a day by the lake.

Oh, and for those of you, who wonder how's the lume, that's how: 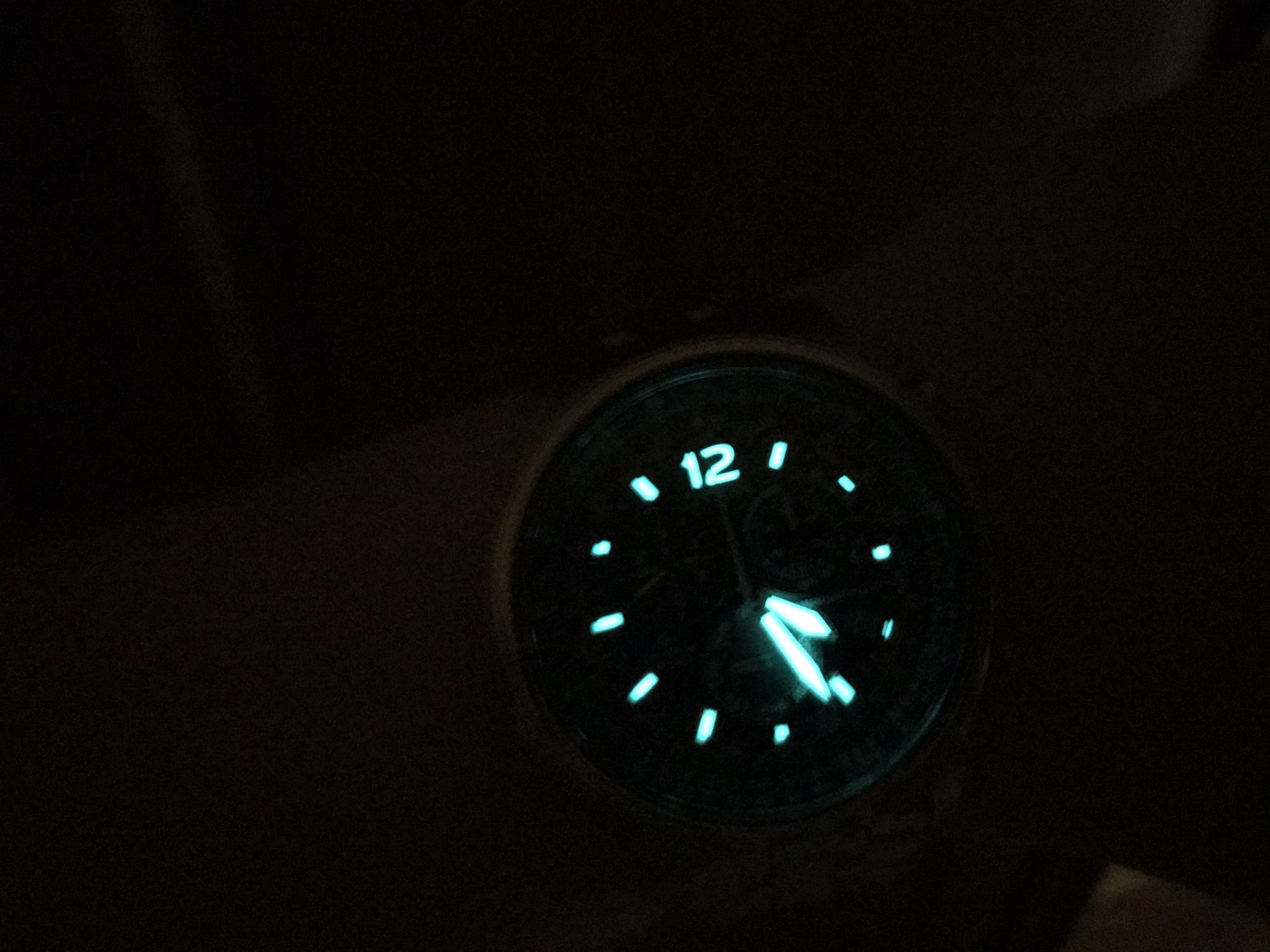 Mr. Bloke out.
You cannot explain away a wantonly immoral act, because you think that it is connected to some higher purpose.
Captain Jean-Luc Picard, Star Trek: The Next Generation

Most excellent, Mr. Bloke. There's a good reason why Citi's the biggest watch manufacturer in the world.
I find tv watches to be like the guys who raise their truck you need a fricken ladder to get in. It’s a attempt to look cool... that’s all.

True story from this weekend... I changed a couple of watch batteries for my brother. After putting his G-Shocker back together I told him he better know how to reset it.

That is really nice. Love the technical dial and thin bezel. Great choice.

smellody wrote: ↑
September 14th 2020, 12:47pm
Plenty of thyme knobs and words there. I'd like a bullet list of functionality.

Citizen is the shit. Engineers designing watches for purpose. And damned well built.

Think this one looks fantastic.
"I always complain because I'm old now and everything hurts."-Mike Rowe

smellody wrote: ↑
September 14th 2020, 12:47pm
Plenty of thyme knobs and words there. I'd like a bullet list of functionality.

You could use it to get to the moon!

^ It would take me that long to figure out how to use all those functions.

And people says the Navitimer is busy.....


Congrats on your new watch MK. Always nice to get a new one and being completely enthralled with it!


Congrats on your new watch MK. Always nice to get a new one and being completely enthralled with it!

The Navitimer is busy, but this one is way more busy indeed.

And thanks - it does feel nice. Now all I've got to do is read through the encyclopedia that the instructions manual is...
You cannot explain away a wantonly immoral act, because you think that it is connected to some higher purpose.
Captain Jean-Luc Picard, Star Trek: The Next Generation
Post Reply
13 posts • Page 1 of 1