As Mr. Thunder has correctly guessed, the contents of the parcel were indeed... 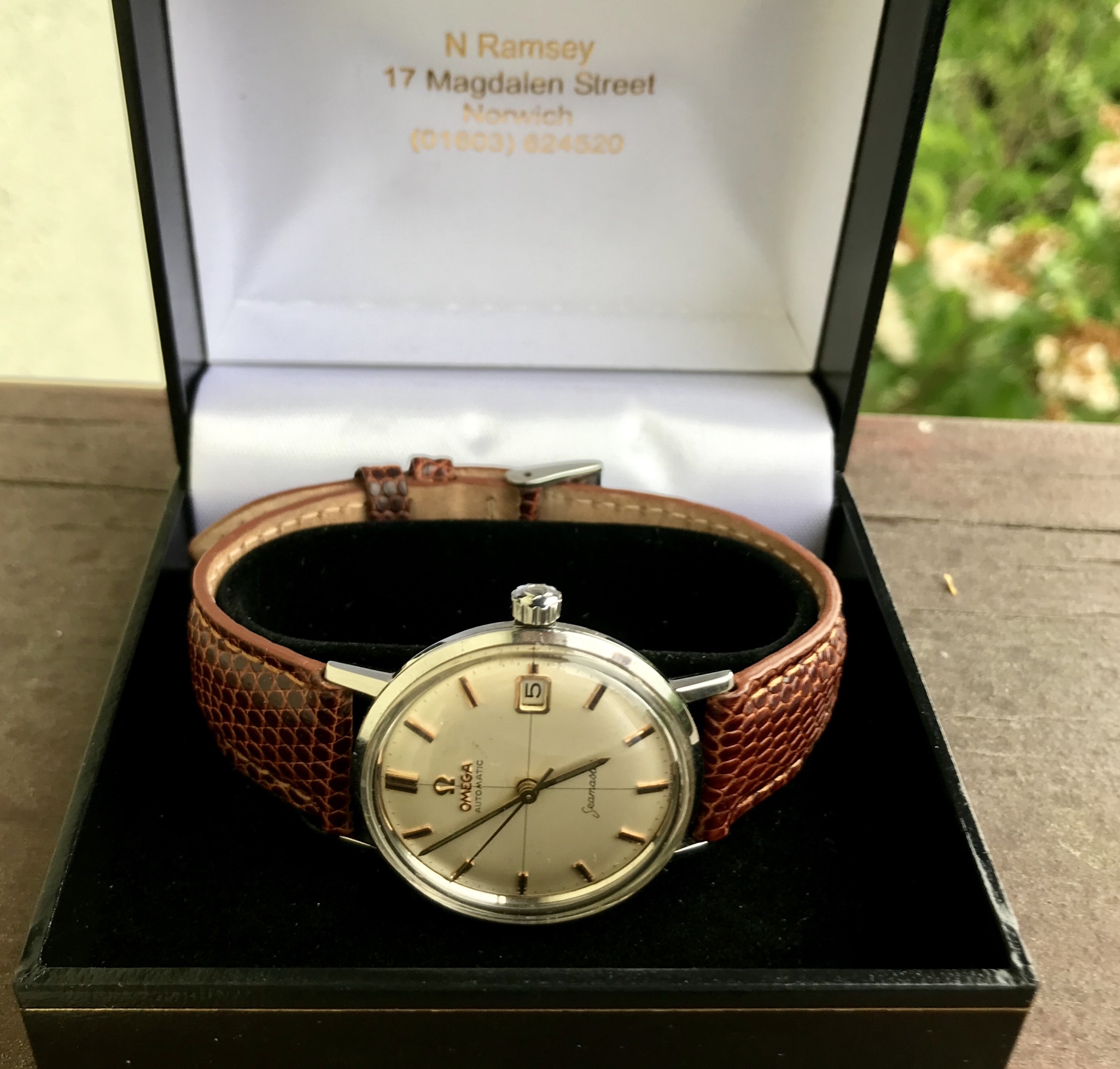 And here it is, in its full glory: 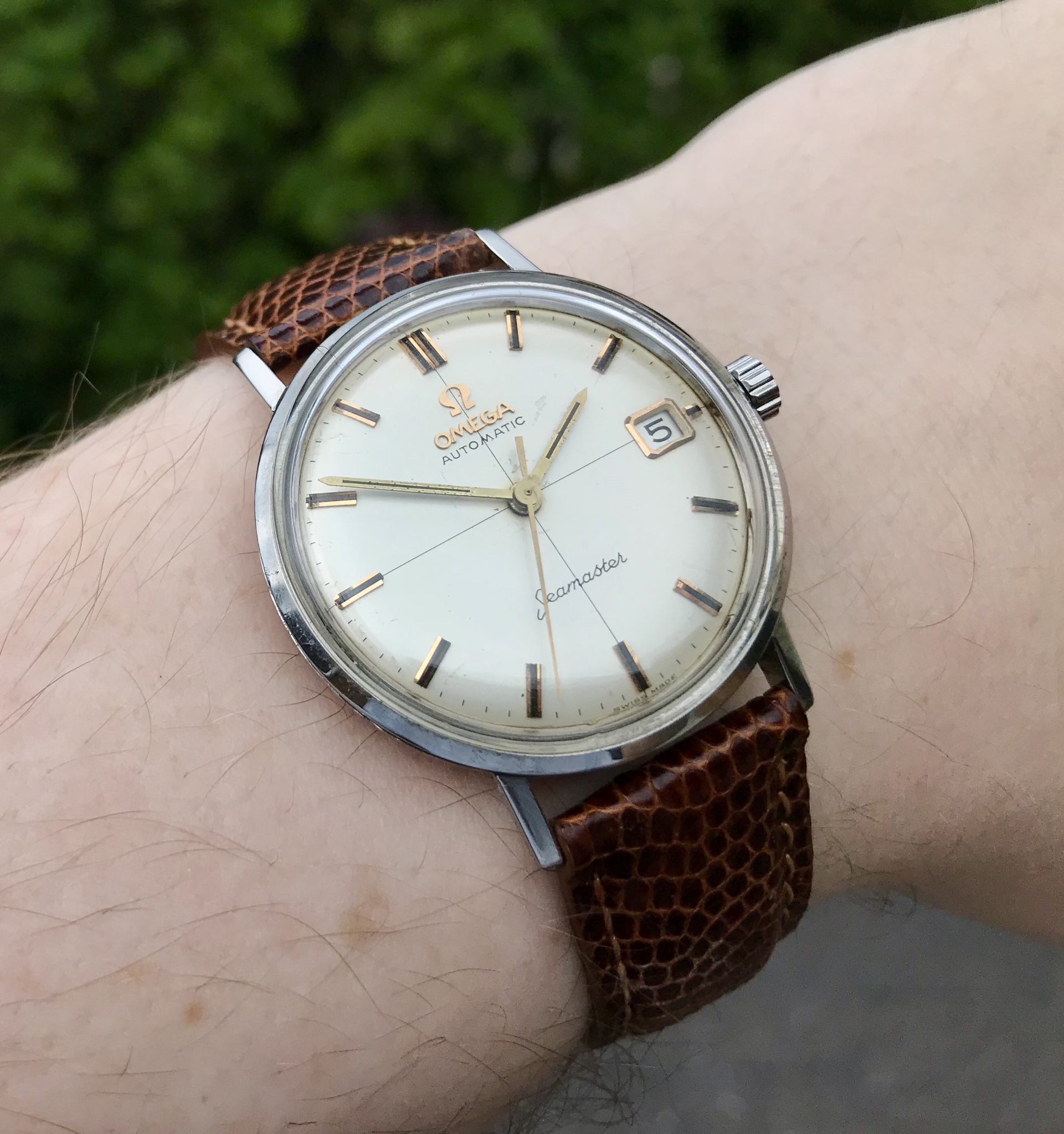 It's a CK 14730 Seamaster Calendar, released earlier the same year that the top-loaders from Omega became the Seamaster De Ville. Their serials are mostly in the range for 1959-1961, later on the reference would have been changed to a six-digit one in the new system.

Yep, it's a top-loader, aka "unishell." Not sure why's it called unishell, it's not exactly a single-piece case. The main bloc, lugs and case back are one part, but the bezel is separate. The edges are still crisp in this one, the crown is signed and correct. 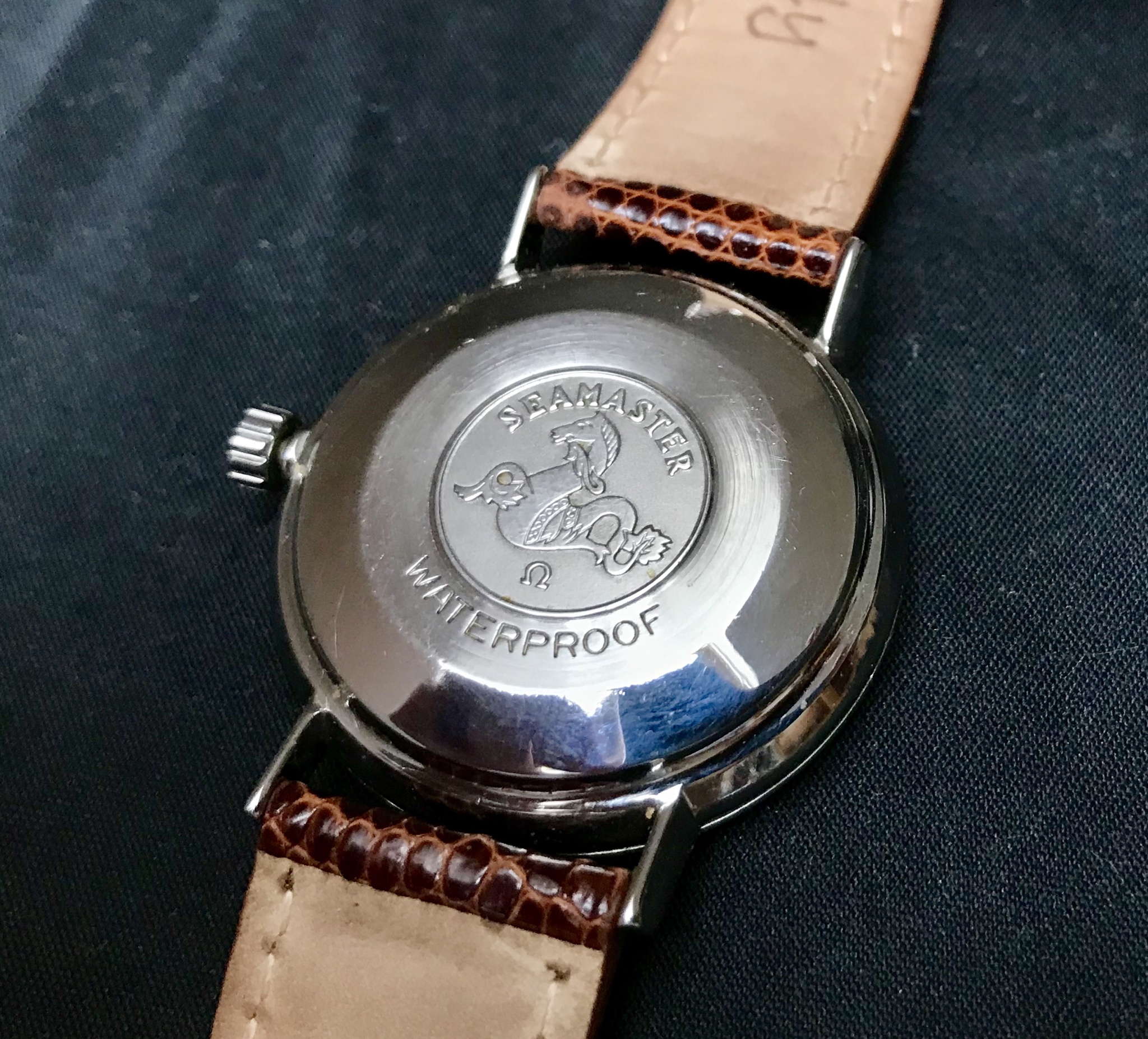 This Omeeger is powered by the cal. 562 - 24-jewel rotor auto, date set by changing 21-24h, Reed's regulator. Fuck, that's the smoothest-working rotor action I've had in any auto. It's quiet, gentle, civilized. 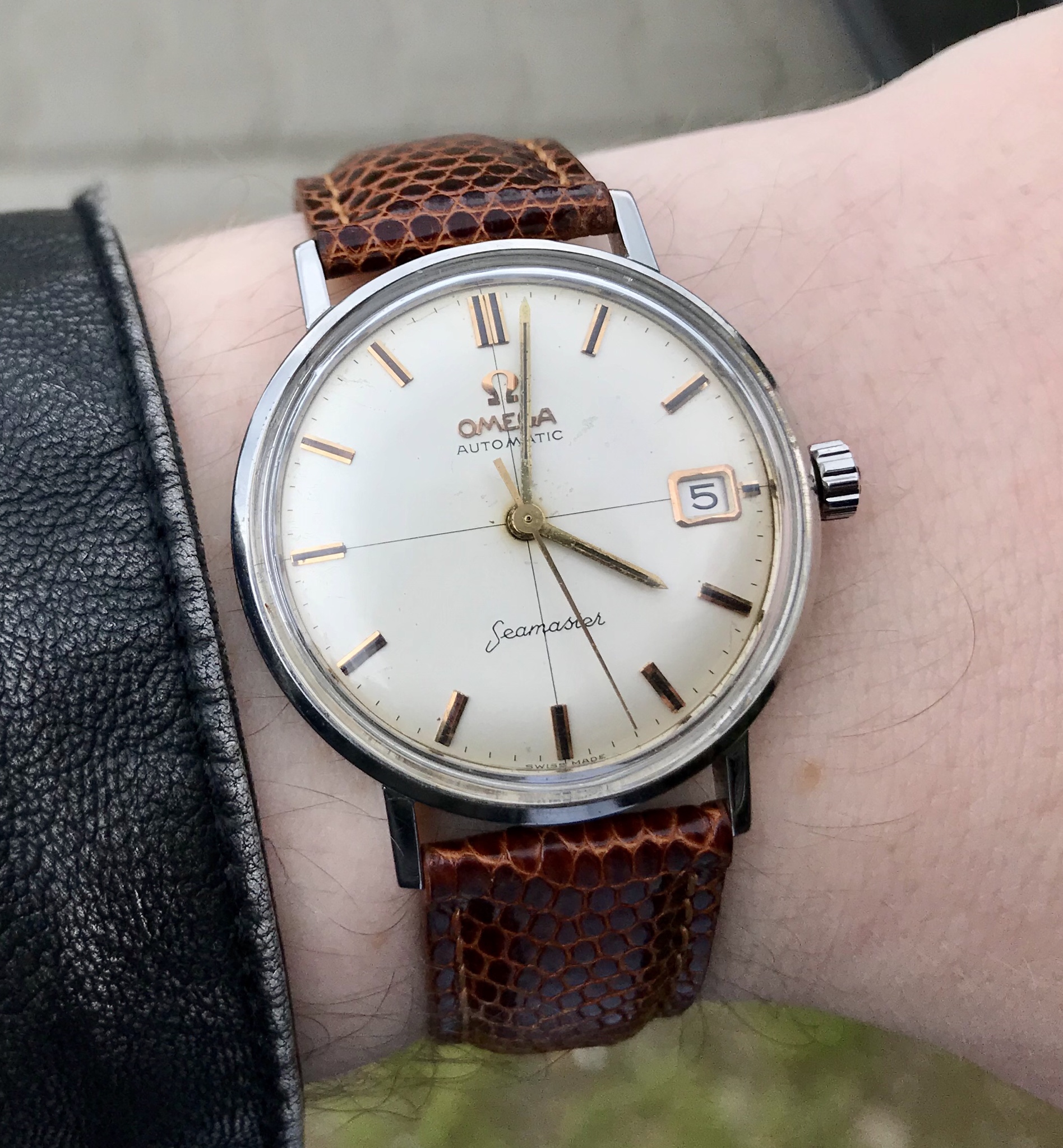 The dial isn't any perfection - it does have a little bit of honest aging. Only a slight discolouration at the centre, slight wear to the varnish here and there, and a little inlay has chipped off the marker at 5 o'clock. I have no doubt that this is a legit dial - crosshair correctly aligned, and as it should be in an early 1960s Seamaster, a "fish hook" S in the Seamaster font.

Just a good, honest vintage Omega. And it even includes an Omega buckle. 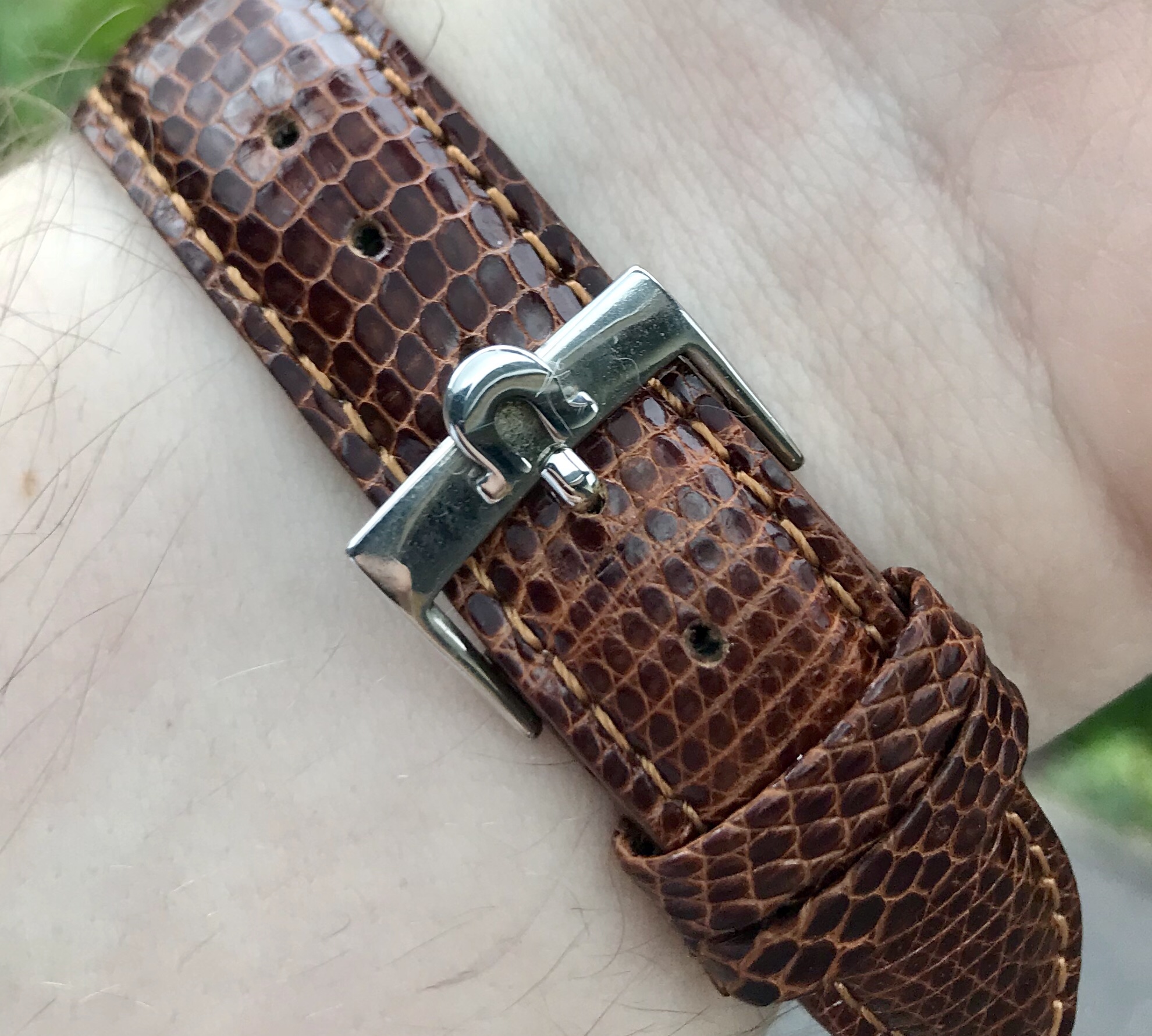 But as I've unpacked the Omega, I've noticed that a thicker lump of the newspaper filling of the parcel has tumbled away from the rest. Was a wee bit heavy, as far as newspaper scraps go, and there was tape on it. Hmmm... Unwrapped it, and...

...found this lovely little piece by the household brand of watches in Britain - Rotary. 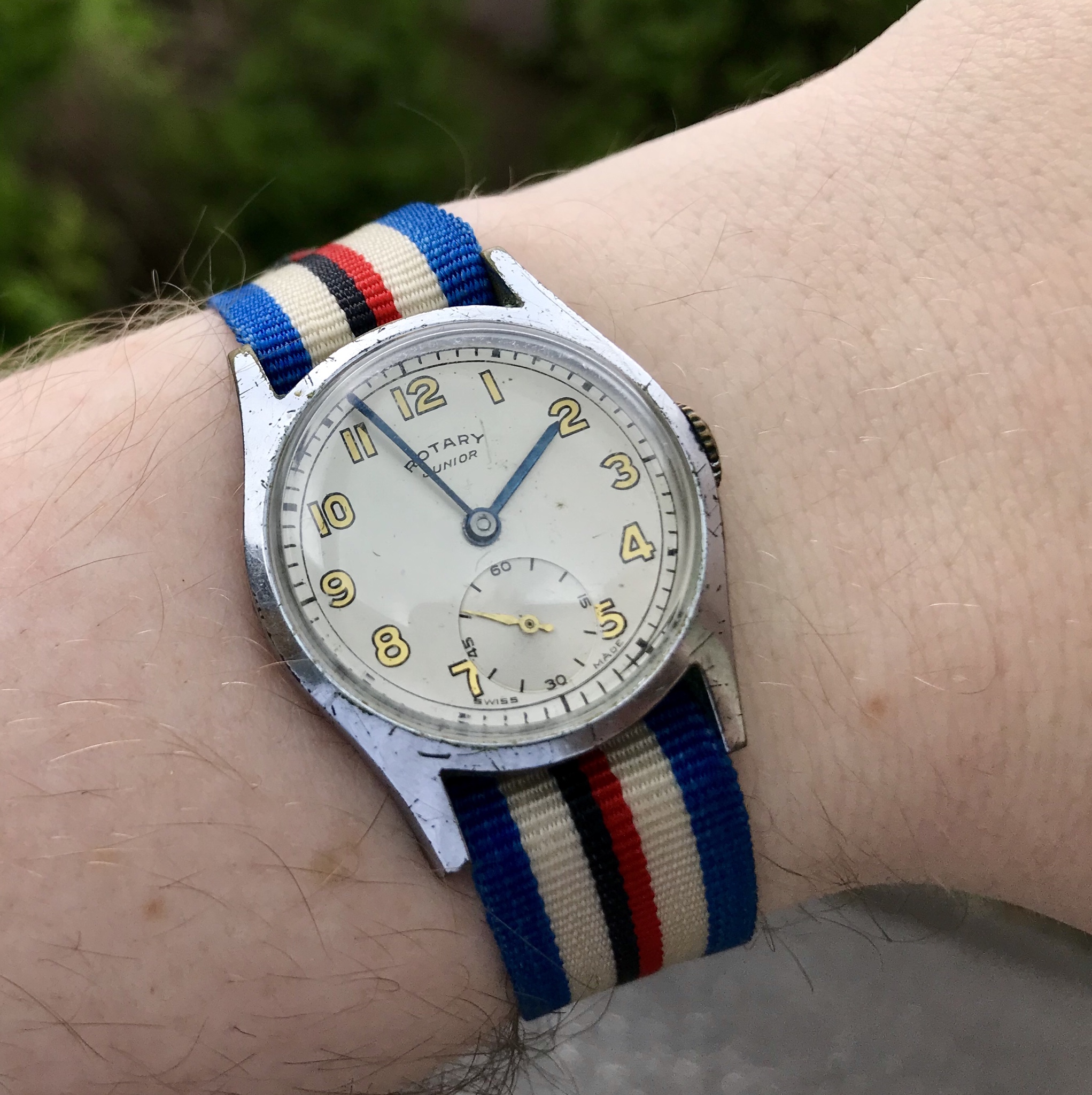 It's a 1940s one, the dial's in lovely shape. 28mm, and as the name "Junior" suggests, it was probably intended as a watch for teenagers. Ah, well, my teenage days are long gone, but I'll be fucked if that would prevent me from wearing this one. Haven't opened the case back - it doesn't exactly want to snap off, and I won't be forcing it. Probably powered by a 7 (or so)-jewel wonder, and since it's a Rotary, probably by Peseux.
Anyway, got to love the blued hands and gilt numerals.

When I've been sorting off the newspaper srap filling, yet another bundle has tumbled out of them. And in the bundle was... 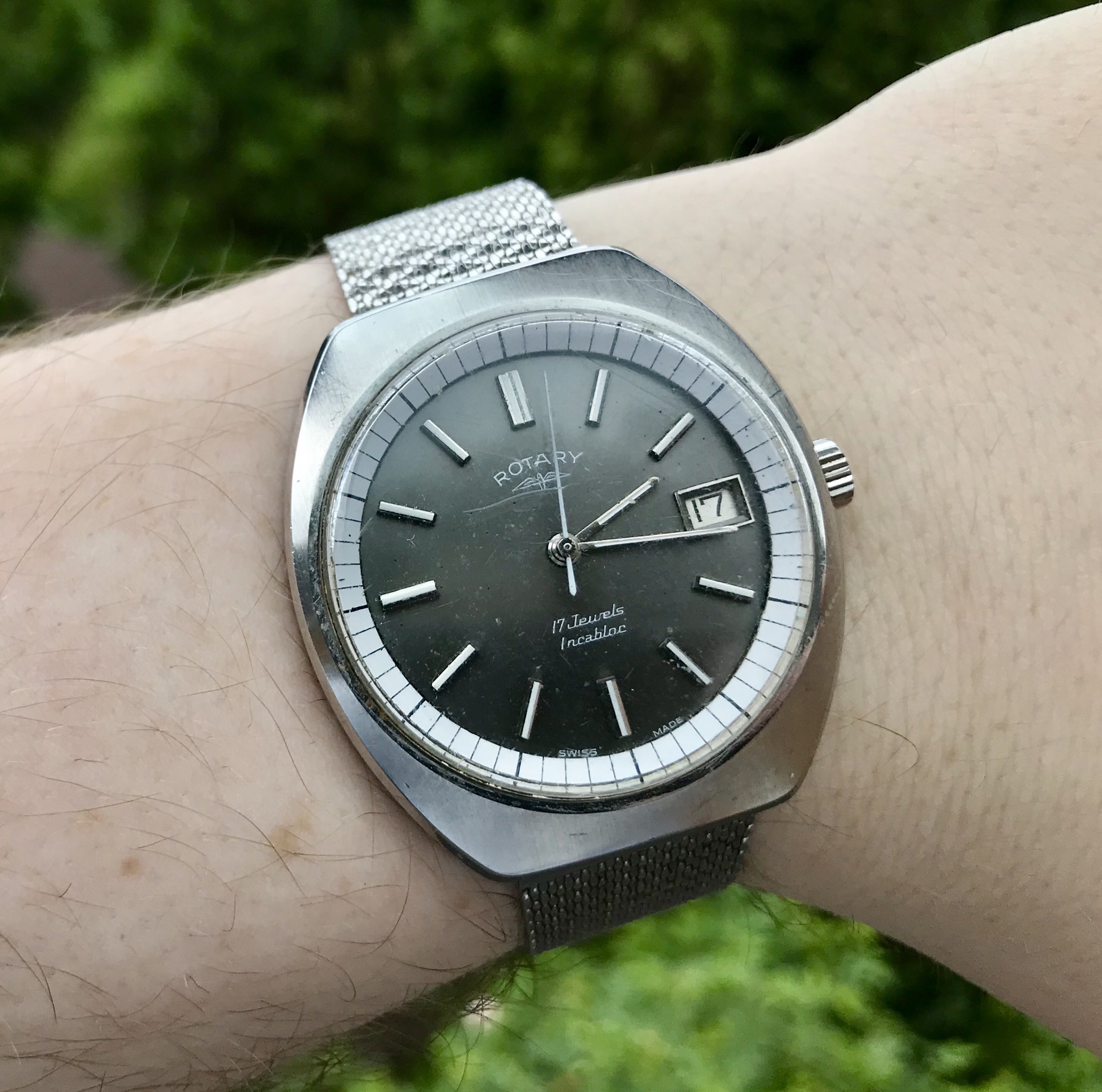 This time, a 1970s one. Powered by an AS/Standard 1951. All steel, case made in the British Crown Colony of Hong Kong. The crystal is battered and will have to be replaced, but the dial underneath it is spotless.

Mr. Bloke out.
You cannot explain away a wantonly immoral act, because you think that it is connected to some higher purpose.
Captain Jean-Luc Picard, Star Trek: The Next Generation

A fine haul, Mr. Bloke. And sporting that Oh-meegah, you'll look just like Don Draper!
I find tv watches to be like the guys who raise their truck you need a fricken ladder to get in. It’s a attempt to look cool... that’s all.

You have great taste. Maybe I'm partial to off-white patina dials, but these and several of your others are just beautiful.

Many a Watch God drain numerous horns of their finest ales in salute to your fine ass pickups..the Omega is the bee's knees..

You don’t mess around when you get serious.
Nice, every single one of them.
You can have brains or you can have beauty, but you can’t have all three.

Nice, as in real nice, particularly considering the vintage.

Great job. That Omega is really special.
WatchGeeks will go down in watch forum history as the worst watch related site that existed. Trolls, threats, bannings, and owners and sponsors talking out of their collective asses to fleece people out of hard earned money. - Koimaster

Niiiiiice. You’re quite the “Rotarian”!

Great that you got them in a timely fashion mate!
A real looker, and the 'extras' are great too.
Matt is always generous, I have been a recipient of his bountiful excesses in the past too.
http://support.proboards.com/thread/608 ... um-offline

Been enjoying the Omega all day today. Quite the thing to enjoy, I reckon.

So far, all the watches are running, and running well at that.
You cannot explain away a wantonly immoral act, because you think that it is connected to some higher purpose.
Captain Jean-Luc Picard, Star Trek: The Next Generation

Been enjoying the Omega all day today. Quite the thing to enjoy, I reckon.

So far, all the watches are running, and running well at that.