First of all, what do we imagine Russia and all things Russian to be? The Russians, most likely, see it like so:

So, today a call from a courier woke me up. Why, my birthday is on the 17th, but we're not gonna celebrate it. Quarantine. But hey, what are webshops (yeah, fuck those, but in such times, they're, like, useful) and couriers for... So, I've got a birthday gift.

In the package was...this: 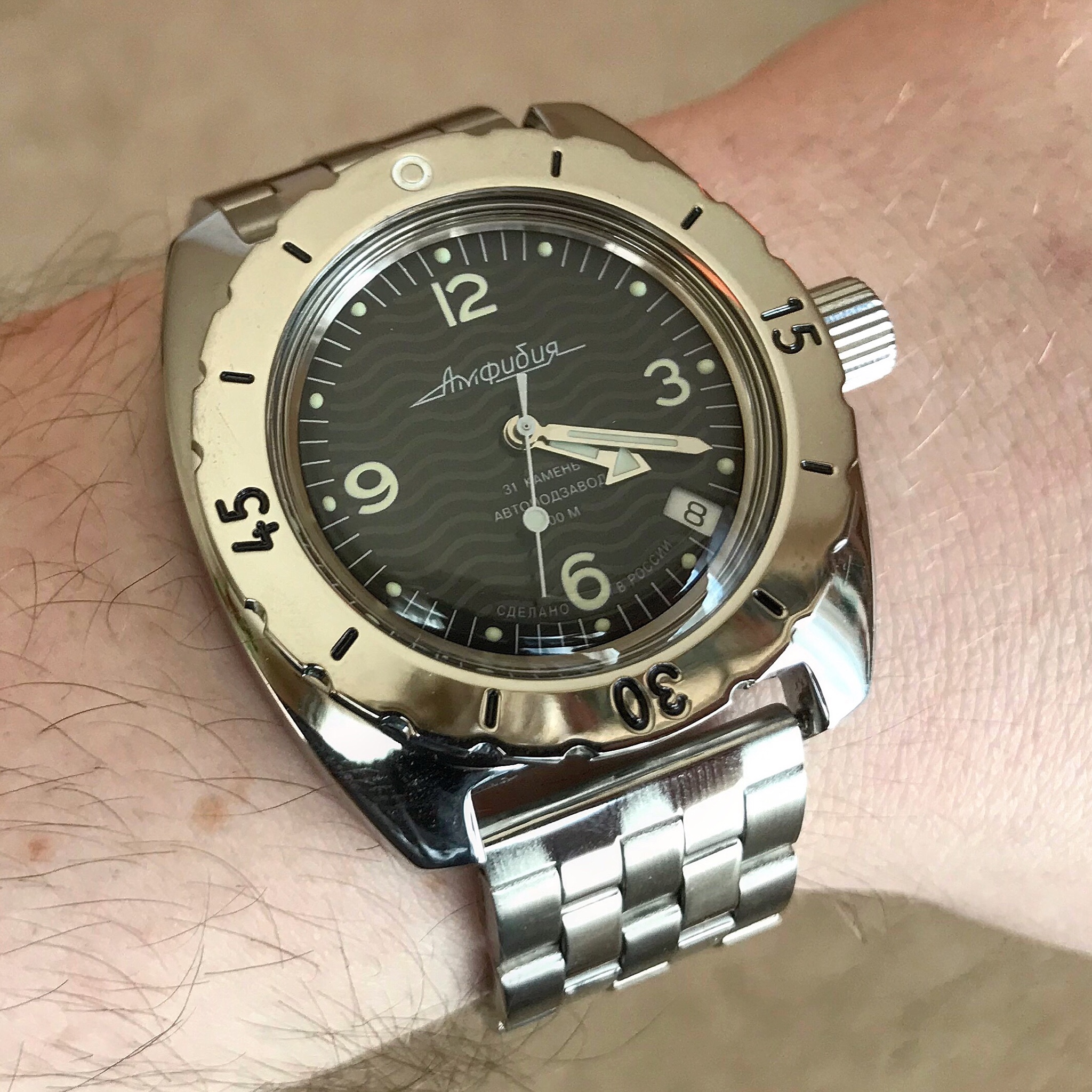 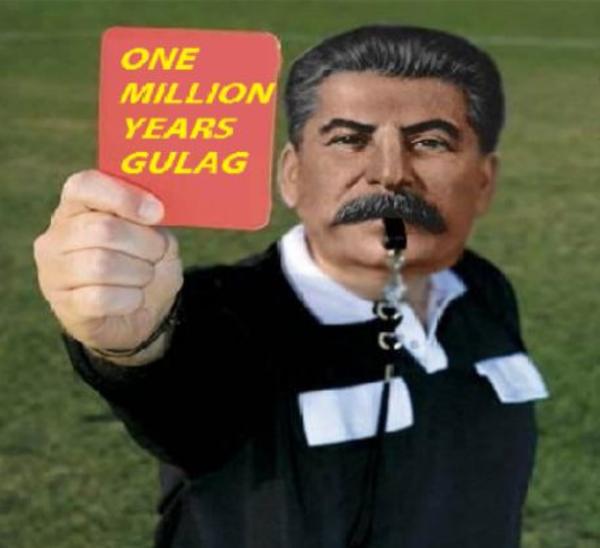 No, I really love the dial. Won't be paying the polar bears and Siberian tigers a visit then, I guess.

Anyway, continuing... The Amfibia 150 line, while it features a cushion case, isn't just a slightly different "Scuba Dude." The case is different - a more square-ish cushion than the 710 (Scuba Dude), with higher flanks. 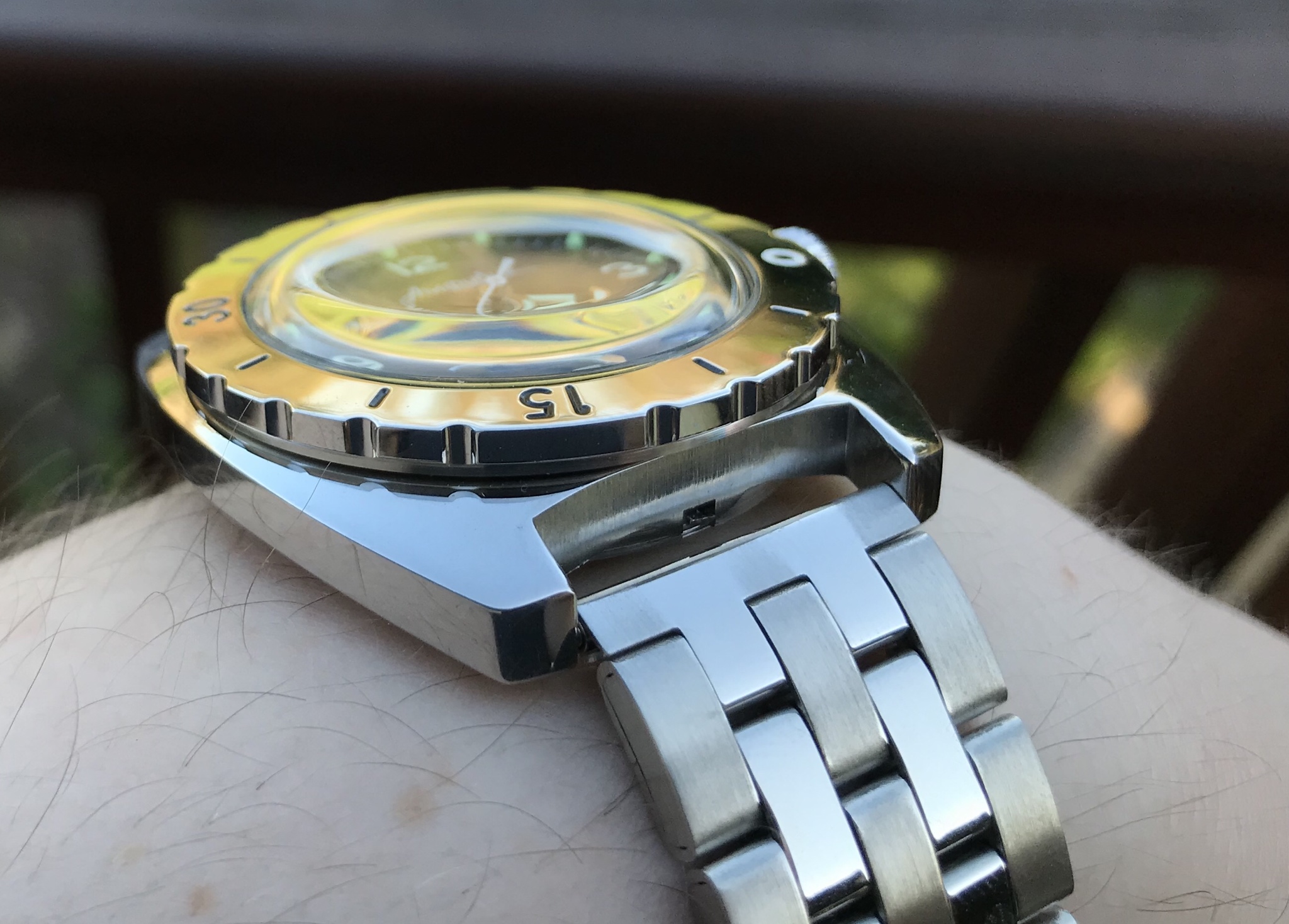 Of course, the rugged and reliable Soviet technology remains the same - screw-down crown with the "wobble" anti-shock solution protecting the stem, same case back design.
And the bezel. Non-clicking, but it sits pretty firmly, and takes some effort to turn. Heard they're wobbly, but this one is anything but. It's chrome-plated, and I might someday be persuaded to order a fully indexed one from Meranom, but it's not that day yet, comrades.
This watch is the second generation of the 150344- the previous one had a coin-edge bezel, which is kinda nicer. But hey, it's a gift. I won't complain. And, I like it as it is. 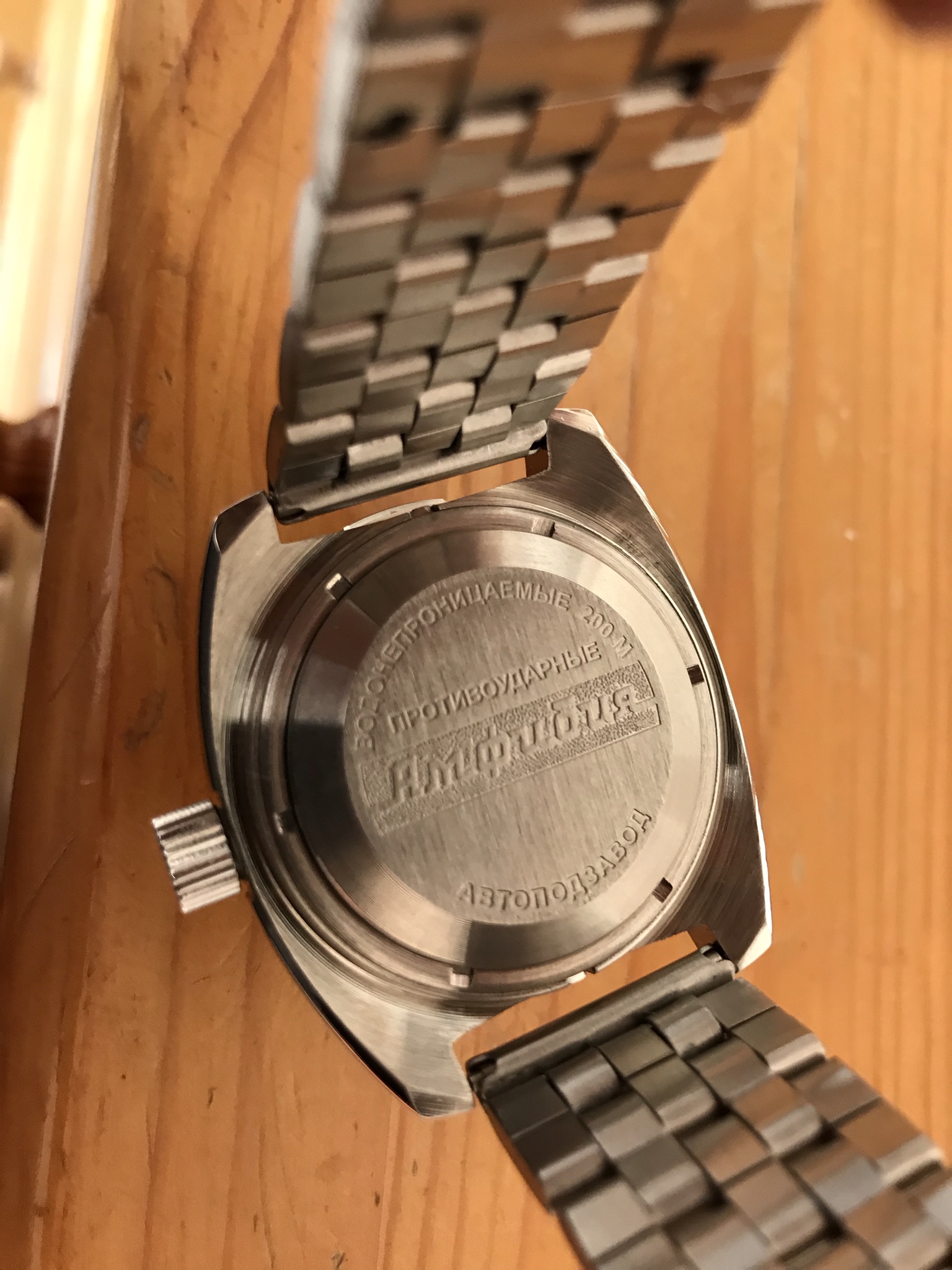 The back conceals a truly ugly, but not bad movement - the Vostok 2614B auto, 31 jewels, and...31h power reserve. Yep, the power reserve truly blows. Dr.Ranfft has the movement listed in his archive as having 40h of power reserve, but who knows if some gentlemen from a black GAZ-24 Volga, reeking of Belomorkanal smokes, haven't by any chance paid him a visit.

Of course, no date quickset, but there's a way around it. Get the hands past midnight, turn back to 20:45, then again past midnight, and repeat until you've got the correct date.
Frankly, I'm astonished by how quiet the rotor in this one is - I would have expected something along the lines of the sound of a squadron of T-34 tanks, complete with drunk tankmen chanting Katyusha.

Let's check out what so many hate about Vostoks - the bracelet. 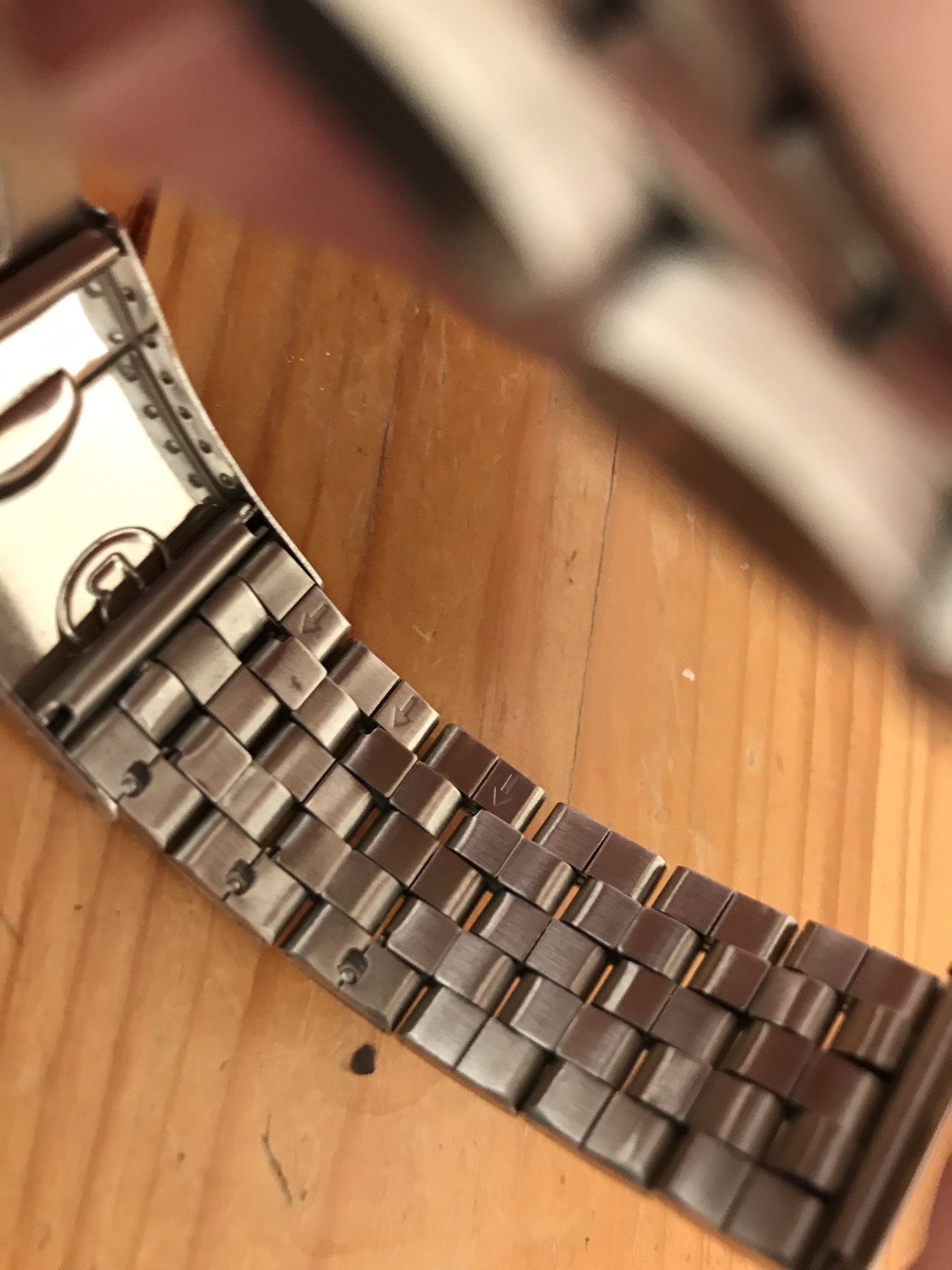 By Jove, these flat pins - yeah, it's a folded sheet metal contraption - were a fucking menace to remove, but in the end I have managed to remove three links, and do the final microadjustment setting on the clasp. As you can see, the clasp offers a rather large number of microadjustment positions, but as for the design of the clasp itself... 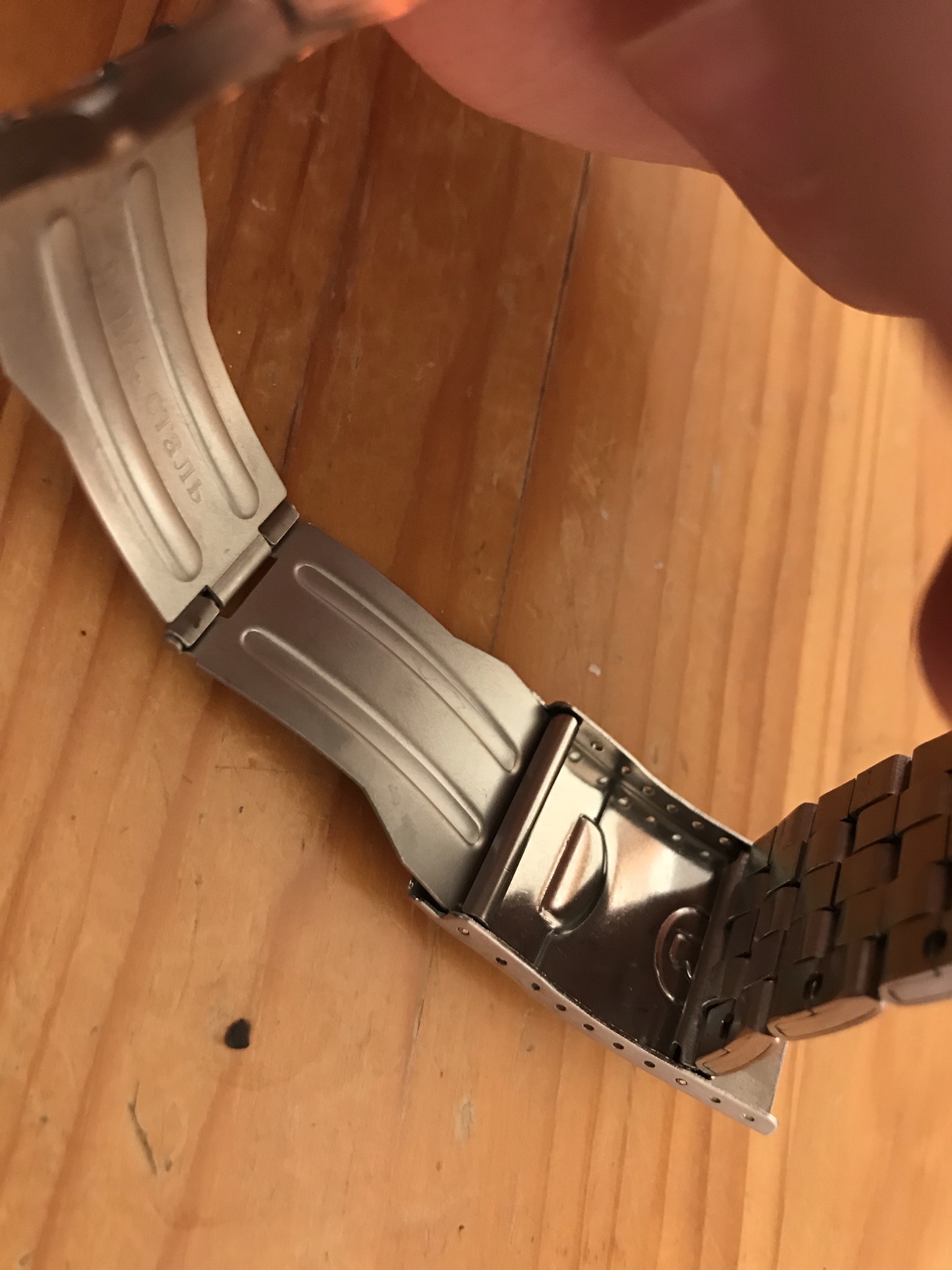 Just an unbelievably perfunctory pressed sheet metal thing. But hey, we've got a signed clasp with a security latch! 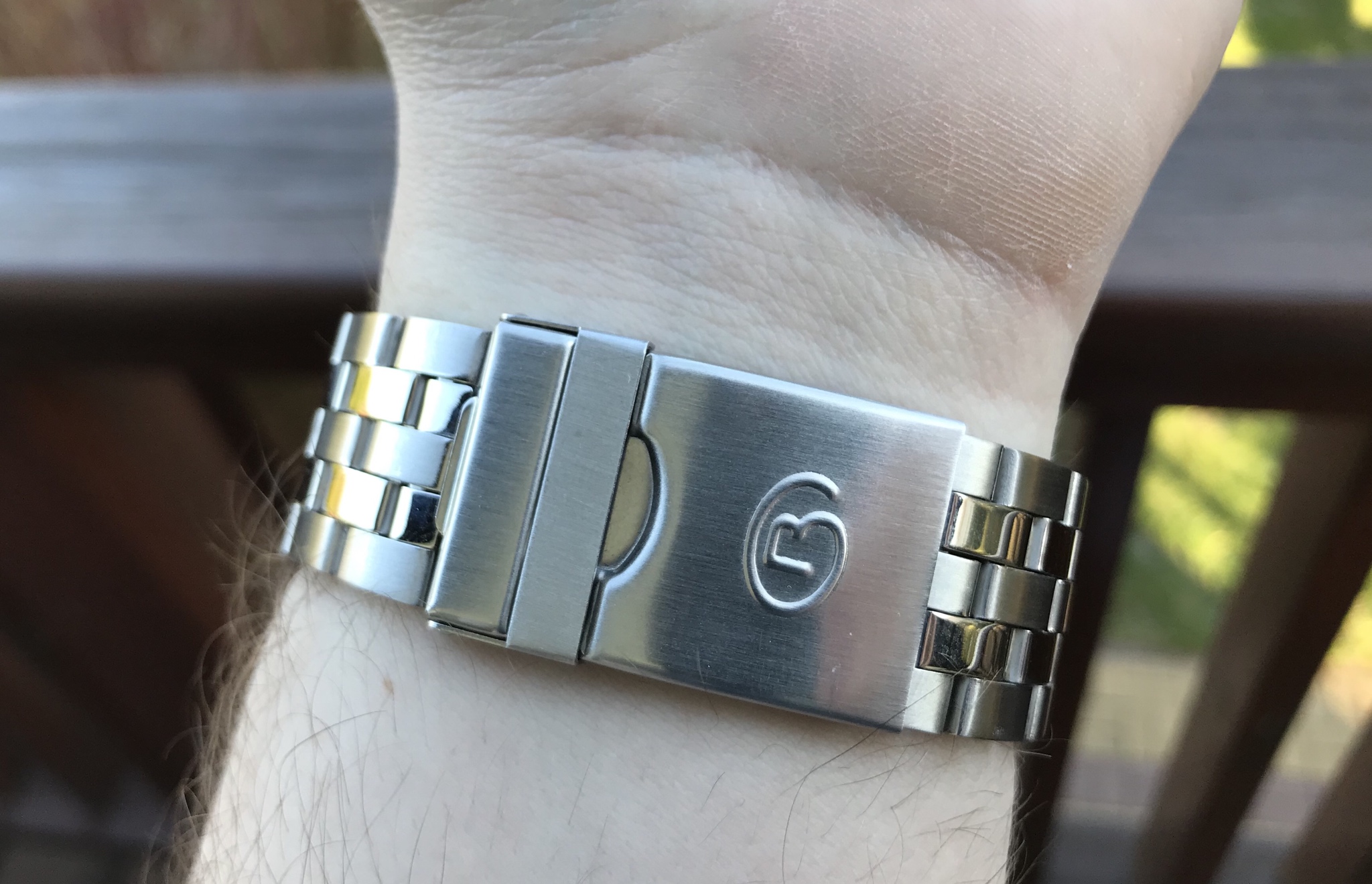 Fortunately, it's a straight-end design, without (as Western imperialist slander has it) the shitty sheet metal endlinks.

The lug width is 22mm, and it so happens that I have an old Fossil shitter with a 22mm black rubber strap, so I might just use that at some point. Will give the bracelet a try first, though. When the bracelet's loose, it tends to pull hair every now and then - however, when it's tighter around the wrist, as I prefer it to, it doesn't really move around.

The Amfibia sits nicely on the wrist. Sure, it isn't light, and at 15mm, not thin. But some of that height can be credited to the high dome hesalite, and the centre of gravity seems to sit rather low in this one. The case is 40mm wide, 46mm lug to lug. Nice, and relatively compact, although the cushion shape makes it look, like, really fucking big, like. Big like the hangover after a bottle of Stolichnaya with a side of pickles, black bread, and herrings. 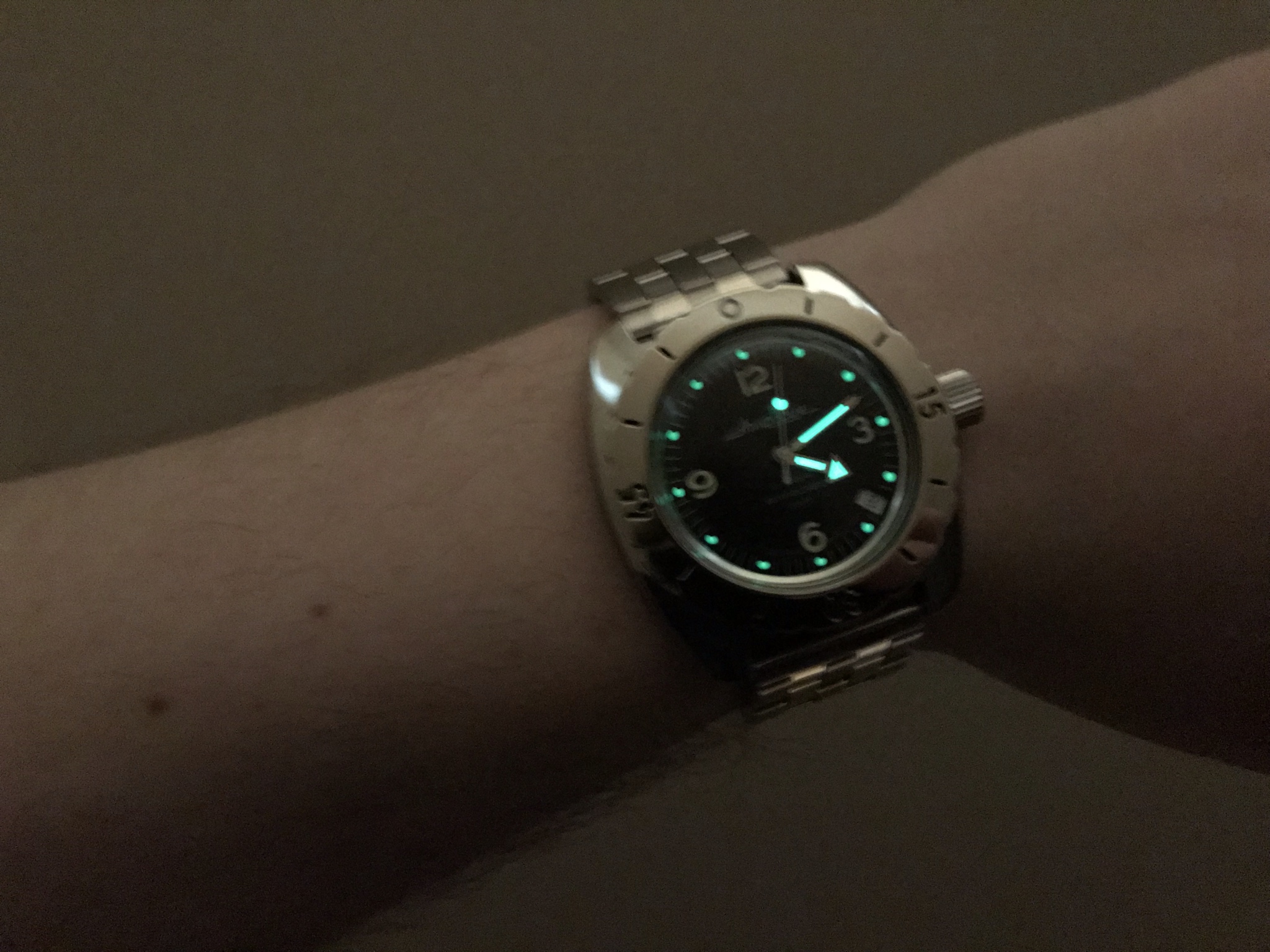 Yeah, that's more than decent. Charges up quickly, glows like a torch. Doesn't beat the one in the Glycine Combat Sub Bronze, but it sure beats - by a hundred fucking miles - the one on my Timex MK1 or the Dan Henry 1970.

All in all, I really like it. Oh, and da zdravstvuyet Sovietskiy Soyuz. If I wouldn't have said that...

You cannot explain away a wantonly immoral act, because you think that it is connected to some higher purpose.
Captain Jean-Luc Picard, Star Trek: The Next Generation

Once you get used to the oddly well designed crown it's a breeze to use.
I rarely set the dates on mine unless I'm only a day or two behind. Otherwise I get agita.


Oh-and I put all mine on Natos. Fuck those fucking bracelets. Fuck them in the aural orifices and with great vigor.

It's hard for me not to like these. The first time I experienced the crown wobble 10 years ago I was like "damn, you mean I gotta send this back to Estonia?"


Belomorkanal.jpg
You do not have the required permissions to view the files attached to this post.
Last edited by kevco on April 8th 2020, 8:45am, edited 1 time in total.

I like your style, MK. Fun watch. The only Russian I have, a Komandirskie, has been a good one. Years ago, I was buying Seiko 5's with those pins and finally bought this cheap tool that makes short work of them.

Very nice, Mr. Bloke. I went through a short period of infatuation with the Russian watches, and still think that they are remarkably good, particularly considering how dirt cheap they are.

I also like the design and manufacture of their watches. They seem to have a short checklist:

A) Does it kinda tell time? DA!

B) Can we kill Germans with it? DA!

PASSED.
I find tv watches to be like the guys who raise their truck you need a fricken ladder to get in. It’s a attempt to look cool... that’s all.

I like it a lot. I had the scuba dude a long time ago. Took a little time to adjust to the crown. Maybe it's time to get another.

Happy economic wearing of watch, comrade! All socialist workers at tractor and brassiere
factory no. 6 will be filled with corrupt capitalist envy and offer many makhorka for the looking at of watch!
"Open the pod bay doors, Hal." "I'm sorry Dave, I'm afraid I can't do that."

Have owned and sold off at least four Vostoks. And still they call to me.

Super. I've bought these before and worried that they were really waterproof. I think I have one about. I'm going to pull it out and check it.

The first one I bought was the one used in the Life Aquatic.