So, after some contemporary watch purchases and one vintage directly from my friend, I decided it's about time that I've returned to where I've started my vintage watch collection - the flea market. And, I think it turned out not half bad.

First, a gem from an obscure brand - a 1940s rectangular Mora: 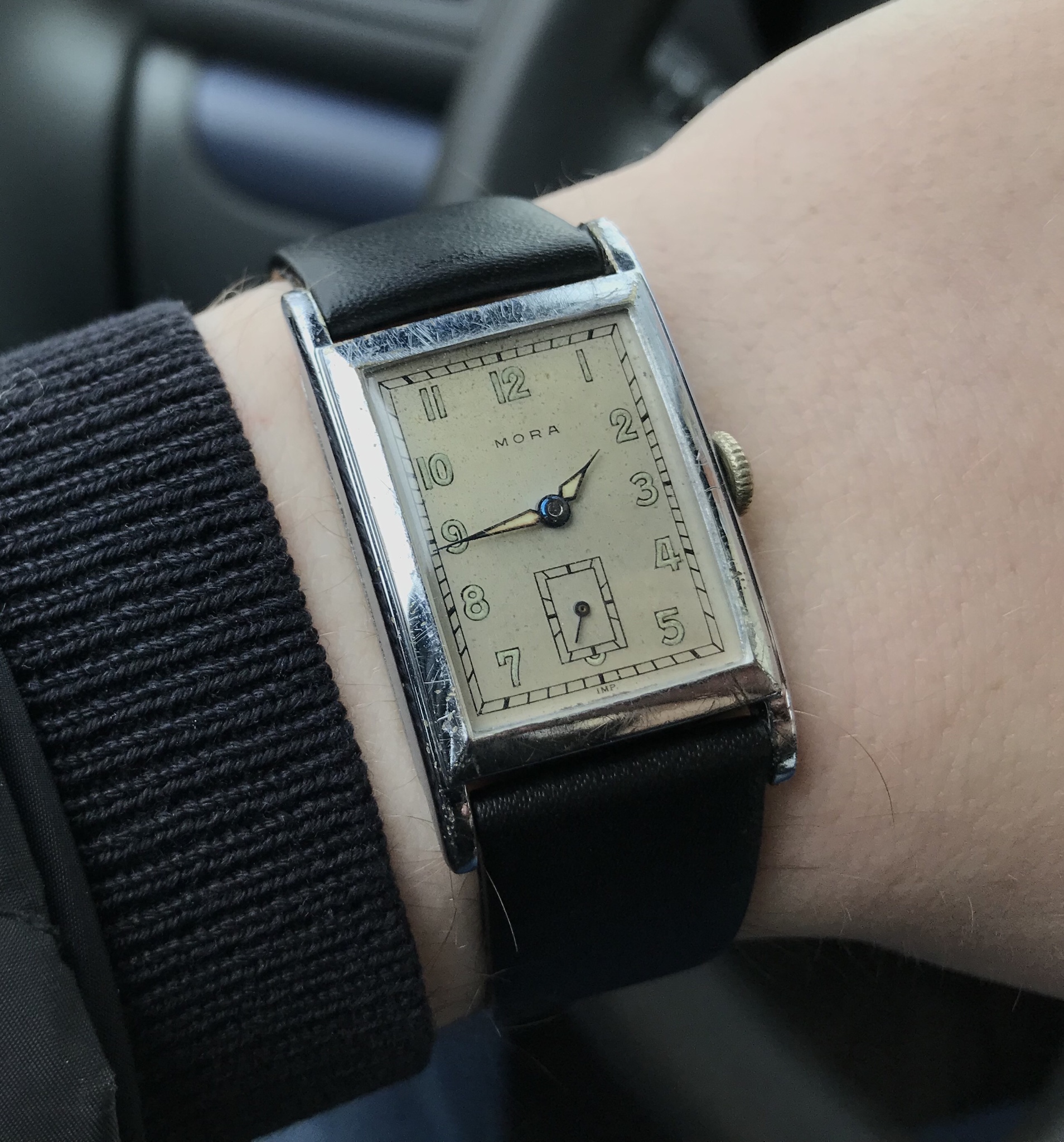 Having done a quick look, Mora was a brand from...Denmark, a trademark of a J.C. Filtenborg of Copenhagen. Fun thing - the seller mentioned having acquired it as a part of a batch of watches in Denmark alright.

"Imp." at the bottom of the dial apparently stands for "importeret", or "Imported." That's consistent with the movement, which is a Swiss import indeed - an AS 984. Yes, it has a round AS 984 in a relatively substantial "tank" case. 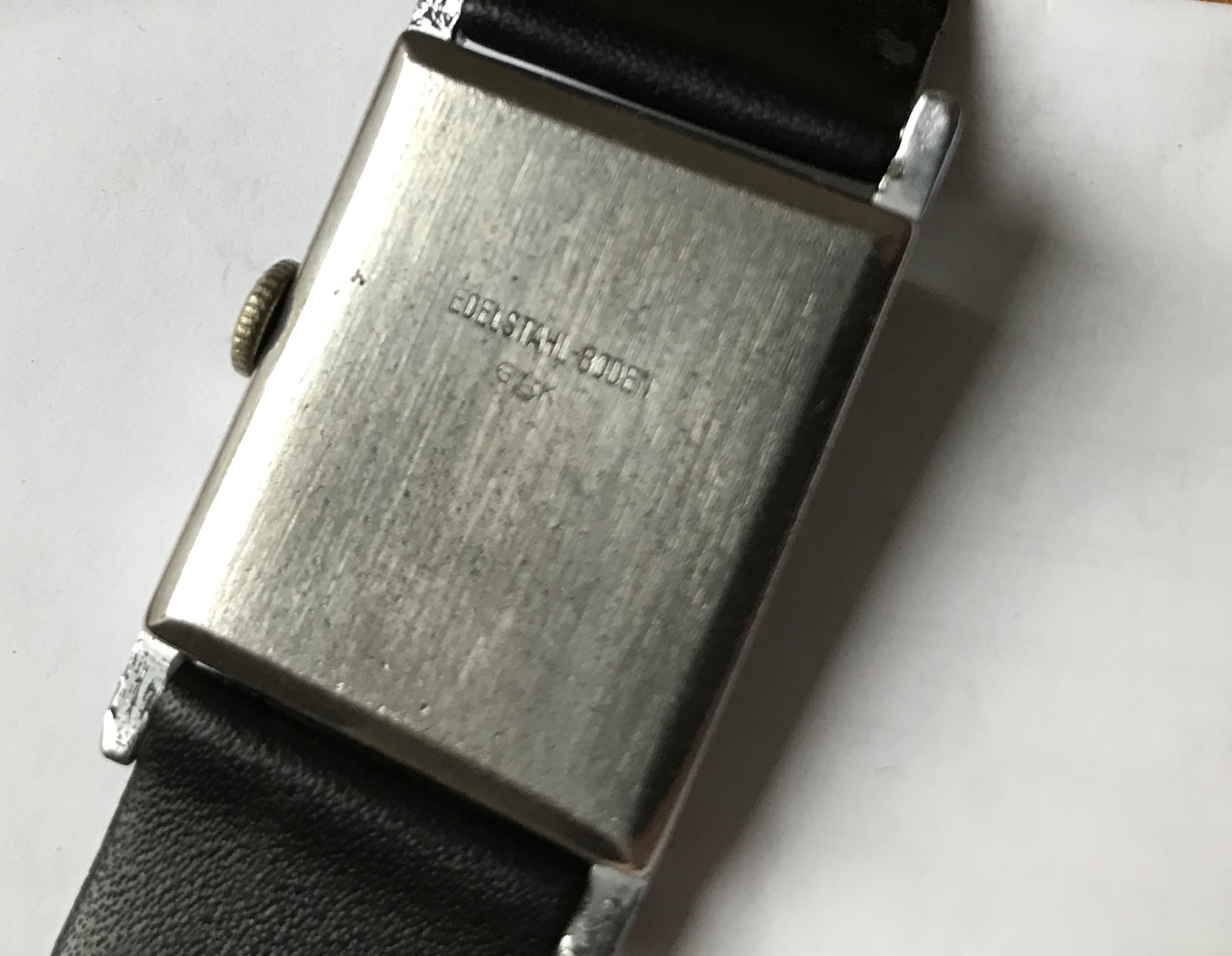 "GK" with star and crescent stands for Gebruder Kuttroff (Kuttroff Brothers) of Pforzheim, registered in 1934. 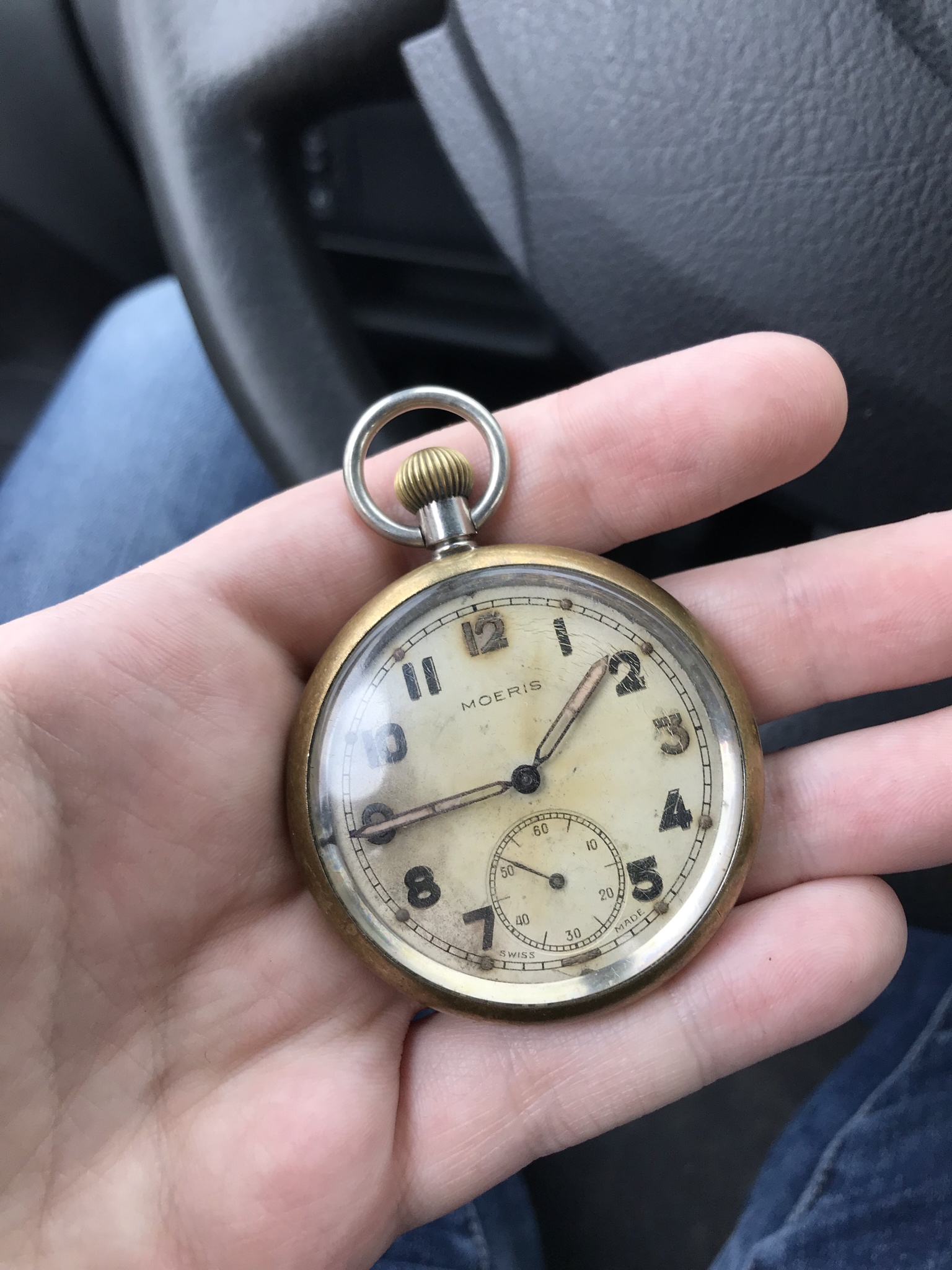 ...could be the first issued milwatch in my collection: 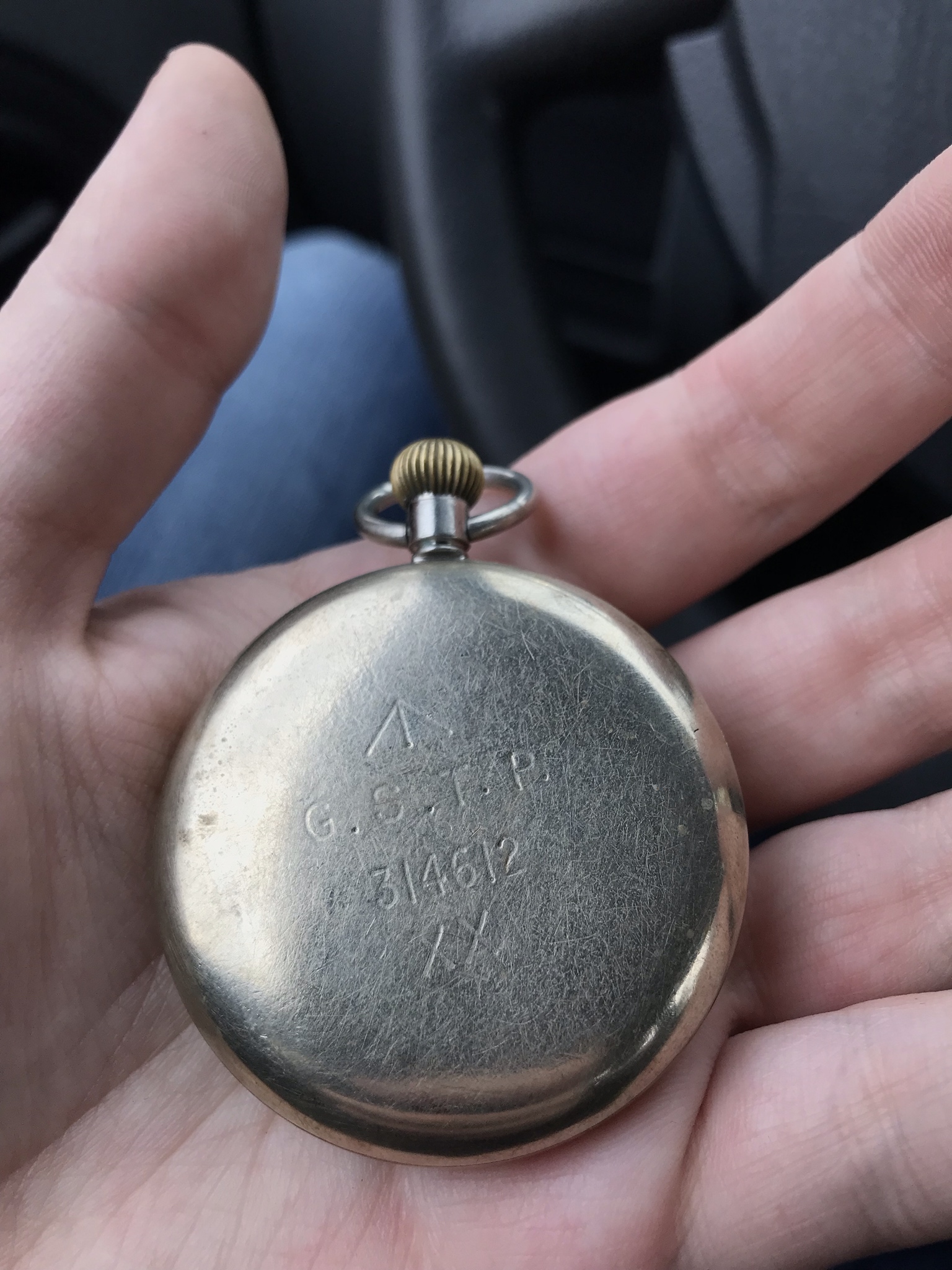 The engravings are worn, as is the rest of the case, but it seems to be a legit GSTP - General Service Trade Pattern, or General Service Timepiece, not sure which of these did the GSTP acronym stand for. Brass case, screw-down bezel and case back.

Moeris was - at some point - a respectable independent brand, which, like a lot of others, at some point was eaten up by a larger company as an alternative to closing its doors - in this case, it was Tissot, and so Moeris got swallowed by the SSIH. 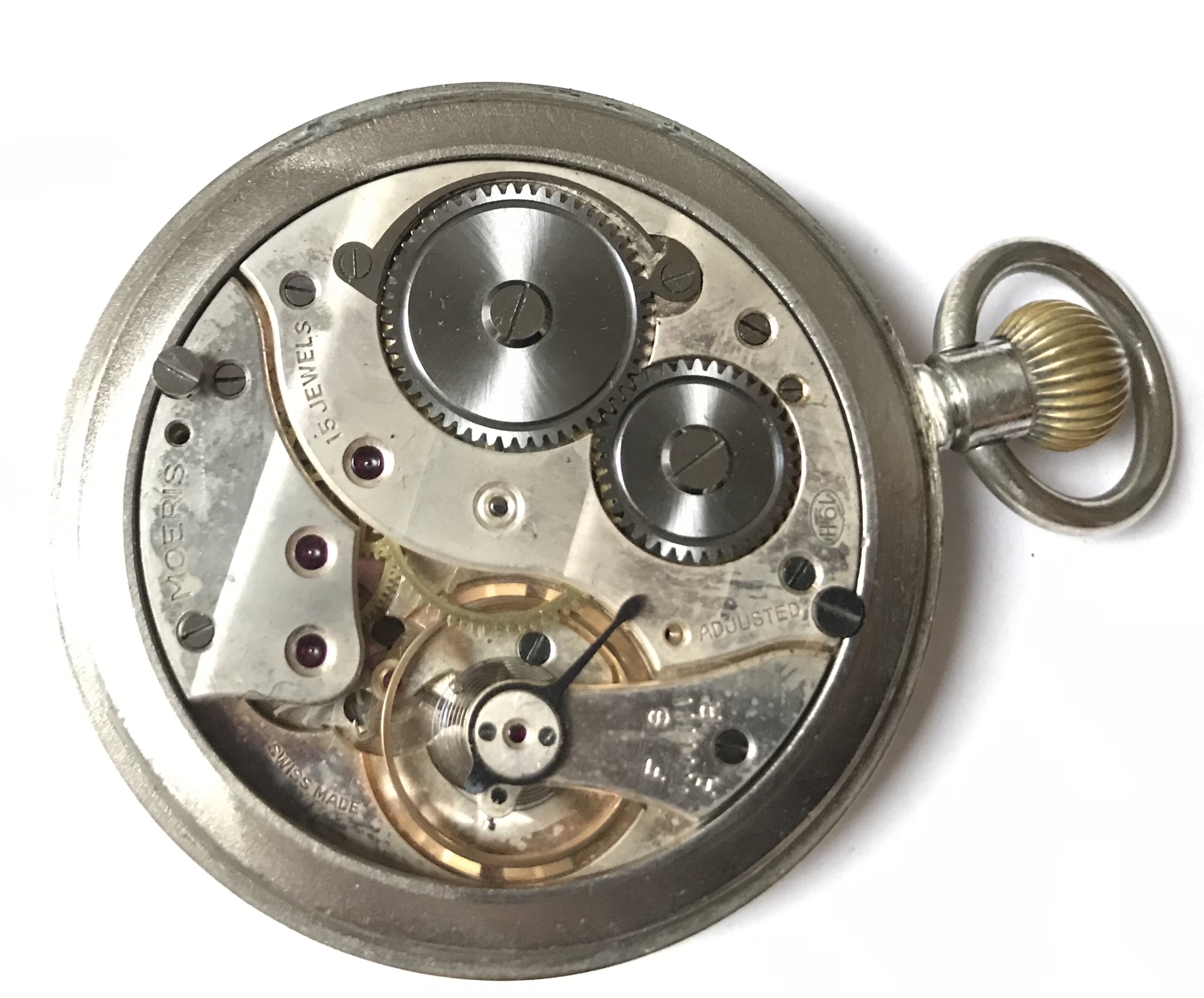 Sadly, the movement - while it does work - will need a thorough service. The position of the regulator indicates that the movement just cries for a watchmaker's intervention.

So, that's all, folks. Mr. Bloke out.
You cannot explain away a wantonly immoral act, because you think that it is connected to some higher purpose.
Captain Jean-Luc Picard, Star Trek: The Next Generation

The Mora is cool. I could also have told You about the brand, as one of my buddies here has one - from his father. I am not posting it, as the only picture I have is showing a watch in a totally aweful state.
Ardnut since 1989

I have never had the patience to spend time at flea markets.
"I always complain because I'm old now and everything hurts."-Mike Rowe

Awesome. I wish we had decent fleas near me; all they sell in my vicinity are knockoffs, Chinese no-brands, and plastic junk ("K-Shock").
WatchGeeks will go down in watch forum history as the worst watch related site that existed. Trolls, threats, bannings, and owners and sponsors talking out of their collective asses to fleece people out of hard earned money. - Koimaster

The only thing I have ever picked up at a flea market was fleas.

Some nice shit right there, Mr. Bloke!
I find tv watches to be like the guys who raise their truck you need a fricken ladder to get in. It’s a attempt to look cool... that’s all.

I have done some digging on the company behind the Mora trademark, J.C. Filtenborg A/S of Copenhagen. It appears that the company is in continuous existence since 1855, and while it's primarily a furniture manufacturer and retailer (which is mentioned in the Mikrolisk entry as well), they're also dealing in fashion accessories and watches. Well, now their presence on the watch market seems to be limited to retailing Citizen. They don't provide any email address on their website, so I haven't contacted them. Would be interesting to know if they have any archive of adverts/catalogs, or perhaps any documentation from the 1930s and 1940s.
You cannot explain away a wantonly immoral act, because you think that it is connected to some higher purpose.
Captain Jean-Luc Picard, Star Trek: The Next Generation
Post Reply
11 posts • Page 1 of 1