A Glimpse At The World of Russian Watches

A Glimpse At The World of Russian Watches

The below article is a from about 10 years ago at honkeedonkee and I suspect was a sponsored one but not much has changed. Russian watches are still being sold by Hester with an assist from dim temple. I do not own a Russian watch but unlike some of the cheap crap sold as swiss made via informercials, I do not think they made up too many stories or made claims that were pulled out of the ass of granny lalo.


As you know by now, it is our goal to educate the masses on EVERYTHING related to watches. The thing is, most of the watches we tend to talk about are Swiss (with the necessary US and Chinese-based pieces thrown in for good measure). Sure we have mentioned a few German watches too, but the world is a big place, and there must be some other mechanical watches out there worth while, right? Right.

Enter the Russians. The Russian watch movement is nothing new, in fact it holds an important and interesting place in grand scheme of things. Many of us associate the word and brand "Poljot" with Russian watches, and that makes sense. After all, Poljot (which means "flight") was the dominant producer of Russian watches for about 30 years.

Prior to Poljot though, most of the watches produced in Russia were strict aviation instruments, designed for military use. Produced by the Moscow Watch Factory (MWF), these watches were on the wrists of the Red Air Force in addition to being in the dash of each plane. They then bore the mark "The 1st MWF Kirova" on the face. In 1946, a man by the name of Josef Stalin personally approved the production of a watch called the K26 Pobeda (Victory) and it instantly became a smash hit.

In 1961, then owned by Poljot, a watch bearing the name Sturmanskie (Navigator) was sent into space on the wrist of Yuri Gagarin. THIS was actually the first watch in space, not the Breitling Cosmonaute or the Omega Speedmaster (so feel free to correct your friends at will). Later, astronauts from France, Germany, and the Ukraine also wore Poljot pieces into space.

We are going to jump ahead many years to the the early 1990s. As the political and economic landscape of Russia changed, so did the landscape of watch production. The 1st MWF and Poljot were gone, and now things began to get interesting.

A company named Volmax had been distributing Poljot for a while now, but they decided they would go out on their own and change the global perception of Russian watches. They did this by registering the names Aviator, Buran, and Sturmanskie, all of which previously belonged to Poljot. This happened in 2002, and things have never been the same since.

Volmax has implemented extraordinary quality controls, and they have gone to great lengths to produce high-grade watches, watches that they can be proud of. The world had long associated Russia with mass-produced tools of a Communist regime, Volmax is doing all they can to change that. Their watches are now on par with many fine Swiss brands. They produce watches in limited numbers to ensure quality and exclusivity.

Outside of the Volmax line, there are a handful of other Russian watch brands to consider; the most interesting is Vostok-Europe. Again taking inspiration from aviation milestones of the last half century, Vostok-Europe's N1 has become a smash hit and offers an automatic movement for a very reasonable price.

Whenever we introduce something new to our readers, we like to encourage them to explore the concept further by offering a discount. Today is no different. Craig has offered all Hodinkee readers a phenomenal discount. To hear about it, just shoot him an email.


Also, we are going to be publishing a full-length review of a Sturmanskie chronograph later this week, a watch we have really grown to love.

For years I loathed all Russian watches because they didn't have a quick set date. Now that I'm retired and don't really give a shit about the date I picked up a couple Vostoks. (Boctok for you commie purists) I do set the date if it takes minimal-like only a couple "8 to 2's"- effort. Otherwise I just ignore it.
Once you get used to the funky crown (when unscrewed it feels like it's about to fall off) design these are great watches for short money. The crown design is explained much better by Google.
I got 2 "Scuba dudes" (Amphibia for you commie purists). Both were around 80 bucks each. They are surprisingly accurate,well made (except for the worst bracelets known to man), and have a decidedly funky look.
I doubt that more are in my future. I don't want to push my luck and get another that loses a minute a day.
They do , however, represent one of the best "bang for the buck" (ruble for you commie purists) deals for an automatic watch. (timepiece for you lighthearted and care free purists) 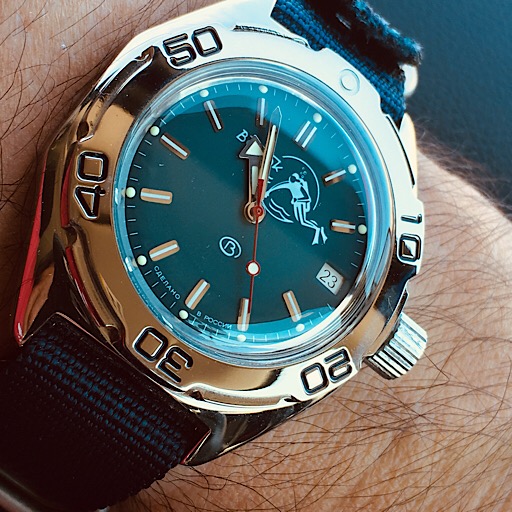 My Scuba Dude is consistently one of the most accurate watches I own and I think I paid $55. 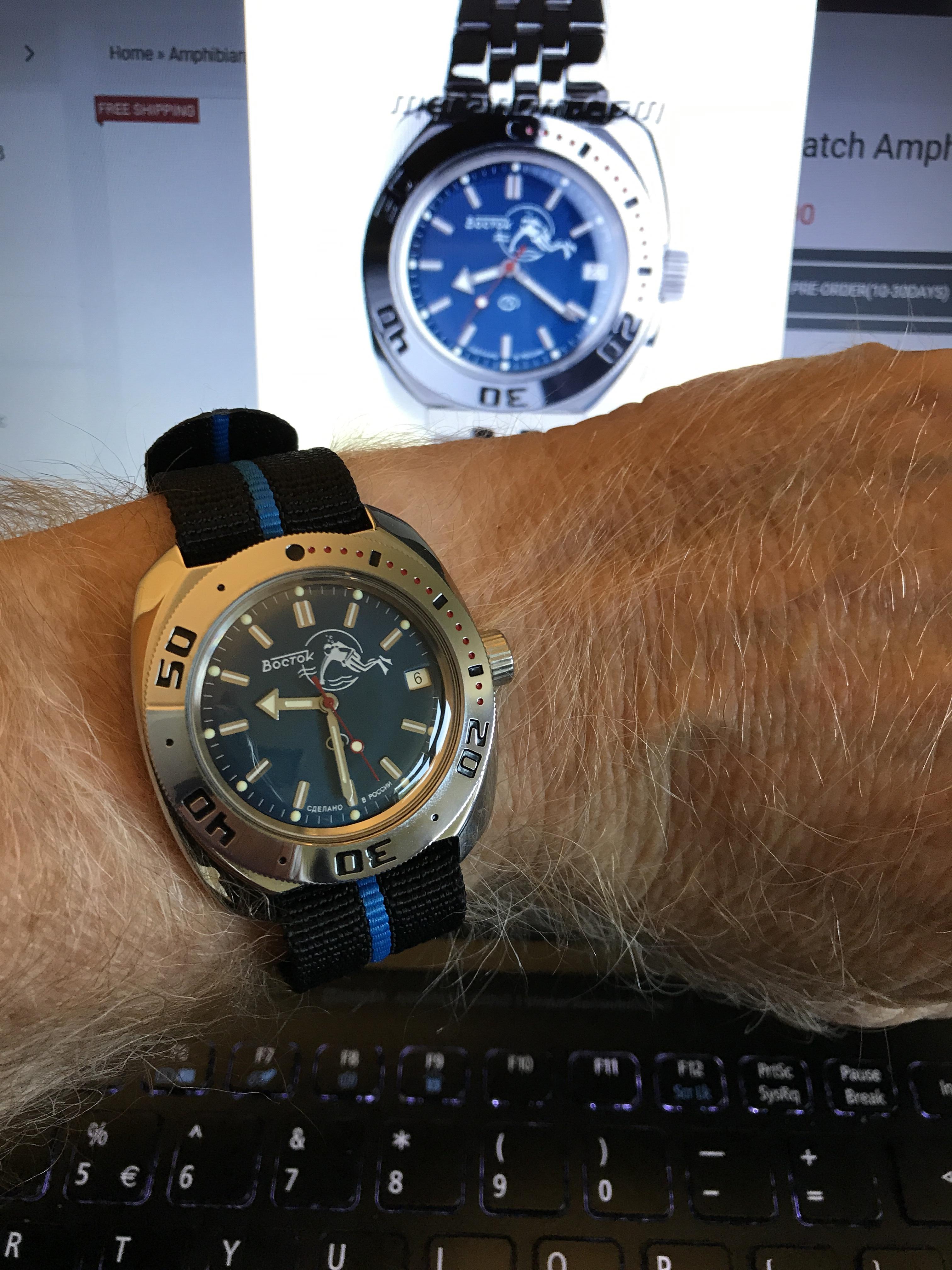 Can't quite buy into the Vostok-Europe (not Boctok) thing. Chinese cases and components, Japanese movements, assembled in Lithuania.
"Open the pod bay doors, Hal." "I'm sorry Dave, I'm afraid I can't do that."

GEEZ, the geek are leaking out of some folks.