The Златоустовский Часы Завод/Zlatoustovski Watch Factory (ЗЧЗ), in Zlatousт, Chelyabinsk Oblast, Russia, was created from the industrial awakening of the Soviet Union. The city of Zlatoust was founded in 1754 in support of the ironworks plant located near the Ay River, 160 kilometers west of Chelyabinsk. By the early 19th century, Zlatoust was known for it's production of bulat steel sabers carried by cavalry and military officers of all Imperial services, as well as the earliest steel cannon's and artillery indigenously produced for the Imperial Army.

The Soviets gained control over Zlatoust in 1918, and transformed the city into a center for metallurgy, mechanical engineering, tool-making, and other industries. Because of it's industrial prowess, Zlatoust became the site of the relocated First Moscow Watch Factory (1МЧЗ) in 1941. After the 1МЧЗ moved back to Moscow in 1943, the Zlatoustovski Watch Factory continued production of Type-1 based wrist and pocket watches.

Beginning sometime in the 1950's (and ending sometime in the 1960's), production began on the Водолаз/Vodolaz (Diver) - also known as the Тритон/Triton (Merman). Commissioned by the Special Design Bureau of Timing Mechanisms, which was established for the development of new designs of special instruments of time, program time and other devices, the Triton was the preliminary dive watch produced in the Soviet Union, and used exclusively by hard hat divers.

With a diameter of 60mm and height of 20mm, the piece is very large and meant to be worn outside a pressurized divers suit, as shown in the image below:


The watch is very stark and plainly configured with a textured black dial with luminous numbers and markers. The "Cathedral" hands were also luminous. Early versions used radium paint, but in the 1960's, tritium was used.

This is one of the earliest Triton, and has been dated to the fourth quarter of 1955. The radium painted Cathedral hands are in two segment form: 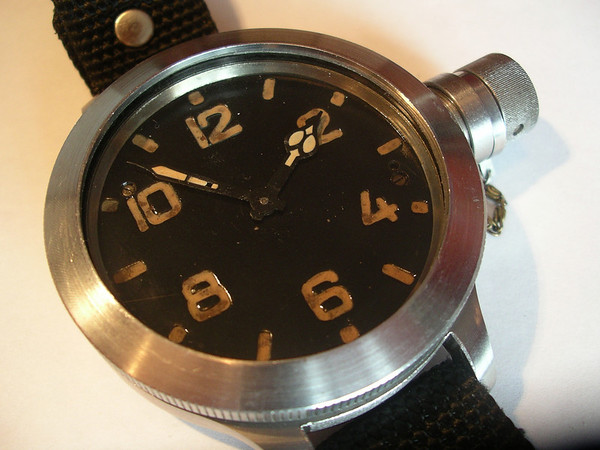 This original design was slightly revised, probably during or immediately after 1958, to the more familiar three segment hands as seen below:


The heavy 260g one-piece stainless steel case was mated to a screw-down bezel which holds the crystal sandwiched between rubber gaskets:


Because of this top-loading case design, the dial is affixed to the movement from the top, rather than from the underside of the top plate (two screws just above the 10 and 4 hour markers). Likewise, the winding stem retaining screw is accessed from the dial side via an access hole below the three-o'clock position: 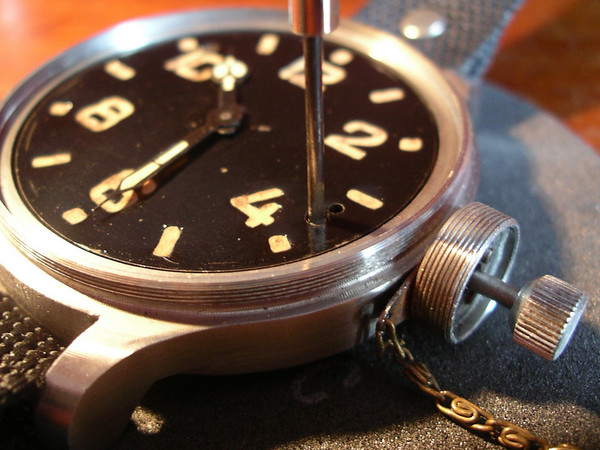 A gasketed canteen-style screw-down crown cover is employed to ensure pressure integrity at depth. Several variations exist, including the gasket systems employed as seen in these two variations below:


The only marking on the case will be the serial number, which on original pieces is stamped on the case back, generally perpendicular to the winding stem. Here is the 1955 casing which shows the very low serial number, as well as the deeply angled case back bevel: 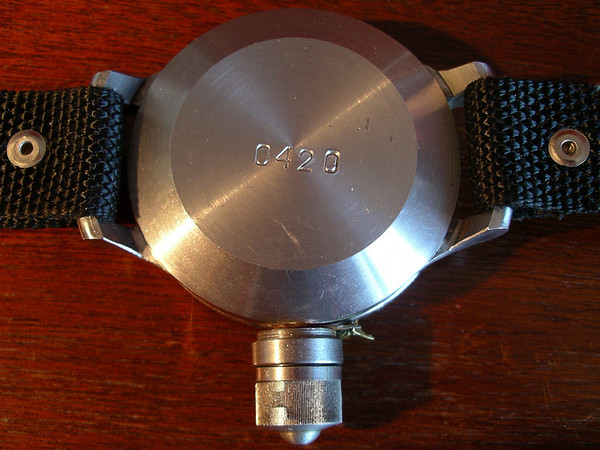 On this rare variation, the case back bevel is very slightly milled in a curved profile, with the serial number stamped in-line with the crown. Also of particular interest is the use of very course threads on the collar. This case also uses a different sealing system in the crown collar and may represent an intermediate production - and is quite possibly a design prototype:


On this post-1958 revision, the case back beveling is again turned in a more rounded profile, but at a deeper angled inset reminiscent of the 1955 case back above:


Movement
The movement for these pieces was based on the tried and true 15-jewel Type-1 movement made famous by the 1МЧЗ, but produced at Zlatoust, and bears the "ЗЧЗ" factory symbol on the train bridge/bottom plate. Updated with a mono-metallic balance wheel, Bregeut overcoil and brass wheel train, the 191-ЧС is a very robust and accurate movement. 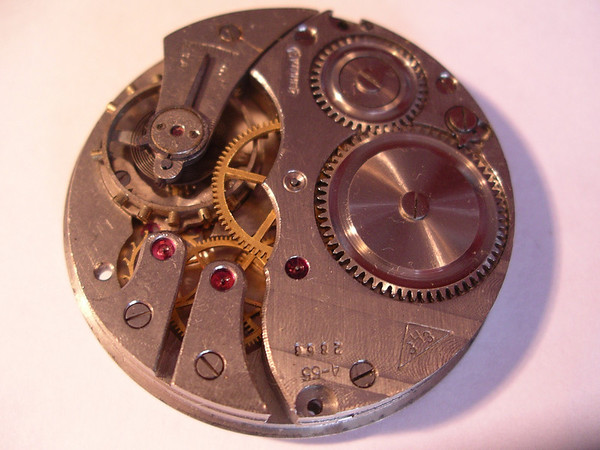 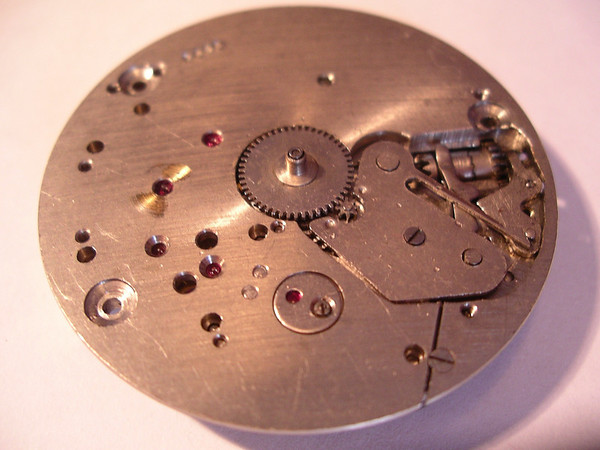 Later in the production cycle, the 191-ЧС was slightly revised to include a unified escape wheel/fourth wheel cock:


Dive Kit
The Triton was issued along with several other pieces of equipment necessary for hard hat diving; the diver's kit included an underwater compass, a depth gauge, and a knife and scabbard (not shown):


The КНМ compass has a small air bubble to prevent pressure mounting when in use. The bubble is also used to level the compass by directing the bubble to the circle drawn on the top of the compass:


Reissues, Fakes, and Frauds
Because of it's massive proportions, it's military pedigree, and its relative rarity in the marketplace, it has become not only a desired addition to any collection, but the subject of myth and legend.

It has also become the subject of many homages, fakes, and frauds.

Unlike these various fakes, frauds and homage pieces, the originals were never adorned with:•A metal grill
•Markings on the dial, such as logos, frogmen, or inscriptions
•A second hand, either central or at 9 o'clock
•Any case back embossing/bas-relief or etching apart from the stamped serial number, which is generally perpendicular to the crown
•A chrome plated brass case
It appears that at some point, the Zlatoust factory produced "tourist" pieces for sale. These are very close to the originals, having been produced on the same equipment as the originals, but lacked the stainless steel case in favor of chrome-plated brass. These factory "reissues" usually contained a Молния or Агат movement, but are otherwise faithful reproductions, and are typically accompanied by documentation indicating manufacture in 1976.

A number of "Russian Divers" have made their way into the market from Invicta. These are usually smaller than the originals (and other fakes), and are configured with different complications not found in the original.

One of the more interesting aspects of the Invicta "Russian Diver", is the claimed pedigree of the line. It has been claimed by Invicta (and promoted by those with a vested interest in Invicta sales), that it was in fact Invicta that originally produce the watch at the request of the Soviet Union in 1959.

After some poking and prodding, Invicta supporters now claim that the watches were indeed originally produced by the Zlatoust factory in the Soviet Union, but that "the Russian Navy came to Invicta and asked them to make a Swiss Made version (the first non-Russian version) of their existing Russian Diver design. Invicta did, and only made 100 to be given by the Russian government to the officers exclusively."

While this is a slightly more believable story, it has - like its predecessor, no supporting evidence.

There are no published bills of purchase/manifests for ebauches from Unitas (a movement supplier for Invicta at that time), no export documentation from Switzerland to the USSR, no purchase orders, no evidence of importation, no list of serial numbers, no manufacturing dates, no original images of the watches, no cost estimates or figures from the production run, and most ominously, no examples in any private collection to date.

There are no examples of an original Invicta Russian Diver extant anywhere outside the one "family heirloom" passed down to Invicta CEO Eyal Lalo from his grandmother that is claimed as "proof" that Invicta did indeed produce these watches for the Soviet Navy in 1959. The image below shows the alleged "1959 Invicta Russian Diver" on ShopNBC during a sales pitch by Eyal Lalo, in a blatant effort to give much-needed credibility to his line of fake Russian watches:

‘Diving wristwatch HBy (Fig. 50) is used by a diver to work out how much time he has spent under water. It has the movement of a pocket watch, which is installed in a watertight body (1) made of stainless steel. The body can withstand pressure of up to 4 atmospheres*. There is a rubber gasket between thread ring with glass and body. Another rubber gasket is in between cap (2) and the body coupling where the crown (winder) is placed. The rubber gaskets make the watch watertight. Digits, marks and hands are covered with a fluorescent paint, which makes it possible to use the watch in dark conditions. A diver puts the watch on his hand on top of diving suit. He secures the watch with a strap made of rubberised material. In order to wind up the watch or move hands, you need to unscrew the cap of the crown.’

* The 4 atmospheres mentioned here are ‘absolute’ atmospheres, which means that the maximum operating depth is 30 metres


http://www.russiandiving.co.uk/Instruments.asp ( use wayback as that site is not around any longer.)