Longines, a watch brand that has long led the field in “neo-vintage” watches, has once again demonstrated its skill in this arena with the new Heritage Skin Diver. The dive watch — which comes on the heels of the critically-acclaimed Legend Diver watch, a 1960s super-compressor-style diver, and last year’s Avigation BigEye, based on a 1930s aviation chronograph— is a further expansion of the brand’s popular Heritage collection. 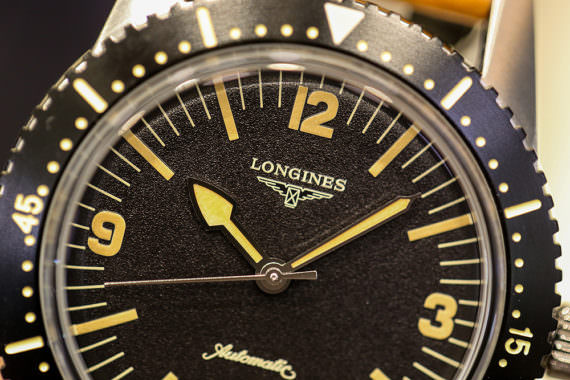 This new piece is based on a skin diving (or shallow-water diving) watch, commonly known as the “Nautilus,” produced by Longines from the late 1950s into the ‘60s (vintage picture above, via Phillips). This vintage model was Longines’ first dive watch, hitting the market at a time when hobby diving was entering the mainstream, along with the equipment required for it, specifically watches. During this era, countless new divers’ watches were launched, most notably the Omega Seamaster, Rolex Submariner, and Blancpain Fifty Fathoms series, though also other watches we’ve covered in “Vintage Eye” like the Zodiac Sea Wolf, DOXA SUB collections, and various Seiko divers, like the recently re-issued contemporary version of the Seiko Ref. 6159-7001.

I like that a lot... question: Does Longines make an in-house auto movement? Several autos I've looked at use some variation of an ETA movement.

AntFarm wrote:I like that a lot... question: Does Longines make an in-house auto movement? Several autos I've looked at use some variation of an ETA movement.

No, they don’t. They didn’t make one since the 1970s, if I recall correctly. Mostly they use the 2824 and the 2892, but there are a few others, certain versions of which are made for Longines only. Still, for them only or not, they’re still ETAs.
I always hope for the best. Experience, unfortunately, has taught me to expect the worst.
Elim Garak, Star Trek: Deep Space Nine

Don't like the color of the numbers and indices- spray painted bezel? No thanks.
^^^Copyright