The foundations of Longines were laid in Saint-Imier by Auguste Agassiza in 1832. However, the real development of the brand took place in the 1850s-1980s, when Ernest Francillon took over the management of the company. The Longines factory was built in 1867. In 1889, Francillon reserved the Longines name and the winged hourglass logo (although the Longines name had been used since 1867). The Longines logo is one of the oldest known registered trademarks in the watchmaking industry. Longines supplied timers that were used during the first modern Olympic games in 1896. In 1899, the Longines watch went to the North Pole with the explorer of the Arctic and the famous mountaineer LuigiAmedeo , Prince of Abruzzo. Since then, Longines has been very closely associated with sport. 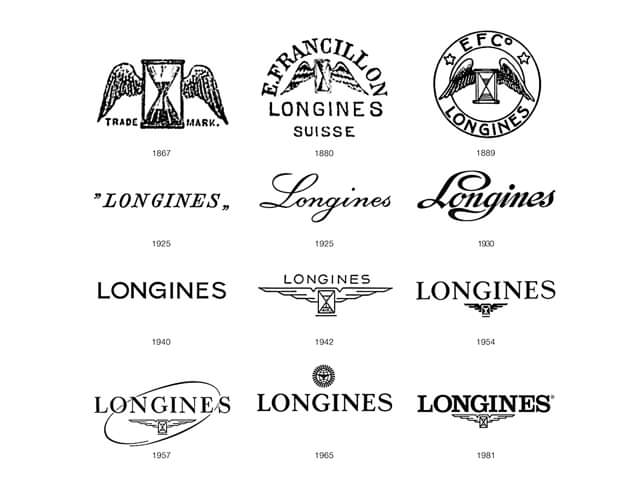 In the second half of 50’s, following the pioneers such as Blancpain, Rolex and Zodiac, many other manufacturers implemented the production of diving watches. Longines was one of the first in this branch.


The avant-garde for scuba watches with the winged hourglass was the model No. 6921-1, popularly referred to as Nautilus Skin diver. The watch was built with an EPSA early pressure case adapted for one sealing crown and external rotating bezel. It guaranteed water resistance at 150 meters.
Nautilus Skin diver was equipped with automatic movement cal. 19AS working at a frequency of 18000 A/h.
The biggest defect of this watch was a ring made of bakelite, which was fragile, and therefore prone to cracks and damage.


An interesting fact related to this model is the year of its production. The official website of the Longines brand gives the year 1959. While conducting my own research, I came across copies with movements from 1958 and even 1957 (cal. 19AS was produced from 1952). Of course, it is possible that they used movements produced in previous years, but I leave a small question mark here.
Around 1960 Longines introduced the model ref. 7042-1, which is probably the best recognizable diving watch from Saint-Imier . It was "typical"- that is, equipped with 2 crowns and an internal bezel - Super Compressor. The cases were again provided by Ervin Piquerez SA. They had a diameter of 42 mm and guaranteed Wr 200m. The movement was a verified 19AS.
In 1961-62 was produced ref. 7150-1, which new movement. It uses cal. 290 with 24 jewels and operating at a frequency of 19600 A/h. 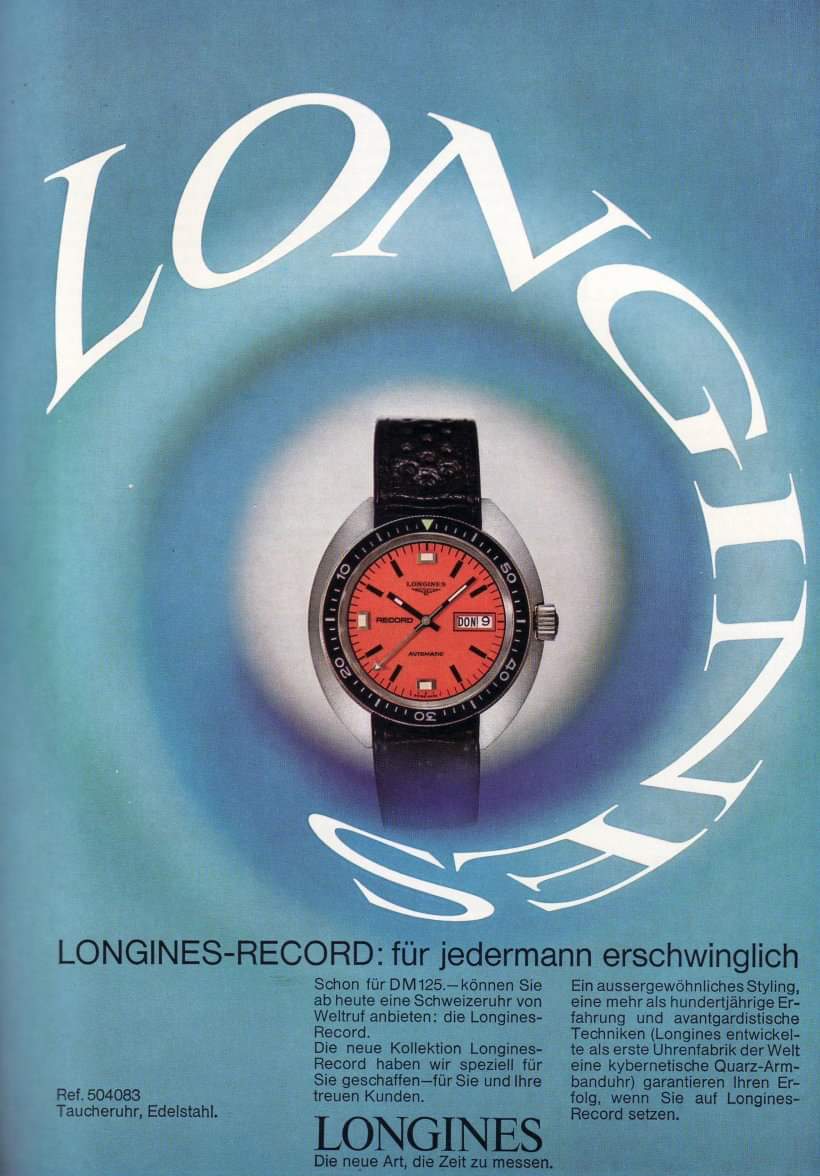 Early Longines diving watches gained a second life through modern reissues. In 2007 a model inspired by ref. 7042-1 and 7150-1 hit the market. It’s commonly known as Legend Diver. Despite its distinctive design, it is no longer Super Compressor, but in return it offers water resistance increased to 300 meters.
Last year, on the occasion of the 60th anniversary of the model, the refreshed version of the Nautilus Skin Diver also saw the light of day.


The second half of the 1960s is a period of great diversity in the subject of Longines diving watches, both in terms of used designs and technical solutions. The manufacturer also gained access to high-class external mechanisms. This happened because in 1961 Longines took over the Record Watch Co brand. Record has been producing in-house movement for several decades. Record operated under the wings of Longines until 1991. 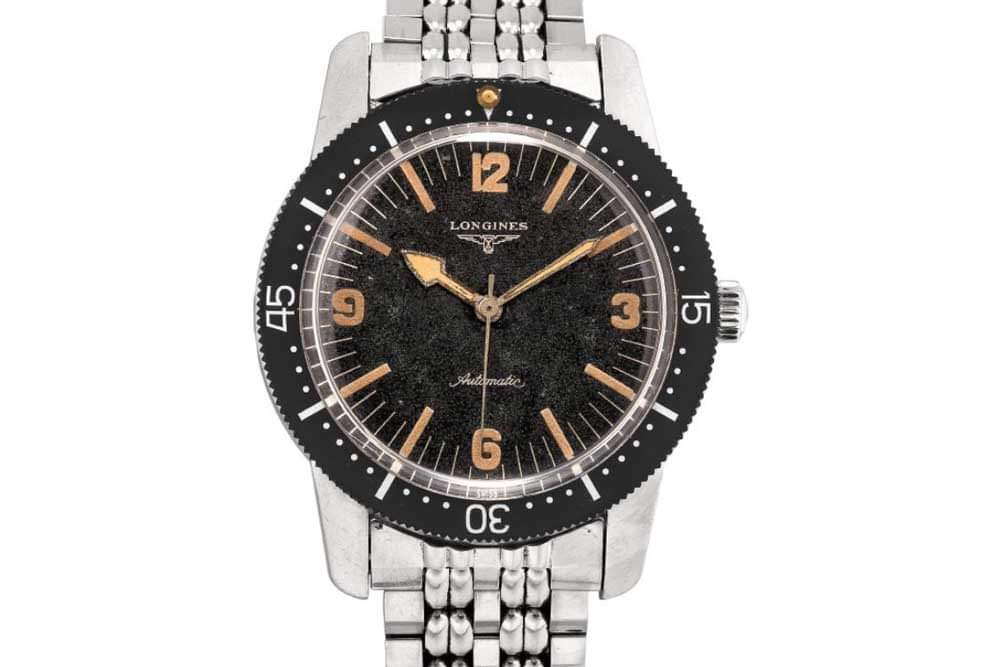 One of the most characteristic "fruits" of this fusion was Longines Skin DiverRef. 8248-1. It was equipped with cal. 505, which was derived from the Record mechanism cal. 1955-2. He had a quick date change supported by pulling back and pressing the crown, a power reserve of 44 hours, and the balance worked with a frequency of 19600 fluctuations per hour. The steel case measured 37 mm without crown.


This watch is an example of a typical 60’s skindiver . Despite this the bakelite bezel with orange minute markers and the orange-colored minute hand give it an individual character. The push-on back is also interesting. In the 60’s and 70’s, several interesting diver-type watches were created under the Longines-Record brand .

The second half of the 1960s also includes Longines Conquest cal. 6651 in an easily recognizable "flaky" case. As part of the same line (case number 1542-1) of the Conguest collection, since the late 60’s, diver models signed with the UltraChron logo equipped with hi beat movement cal. 431 were also introduced . Cases with an internal rotary ring and two crowns were also used.


The second half of the 60’s are also the first Longines chronodivers watches. One of them was model ref. 1967 7981-1 cal. 30CH in a 40 mm case with a characteristic red aluminum bezel.
And although this watch has a limited reissue in 2017, it is not the most famous diving watches with the chronograph from the Saint-Imier.


The line of diving chronographs with the Valjoux 72 mechanism deserves this name more. The most characteristic models are ref. 8229 with black or orange ring insert.


At the turn of the 60’s and 70’s, Longines introduced a series of Ultronic watches equipped with mechanisms ESA 9162 with tuning fork oscillator (designated Longines 6312). It was the work of Max Hetzel from the Bulova concern, widely used by brands such as Omega, Eterna, IWC and Longines . In the 70’s this movement was also used in many models of diving watches. The most recognizable models are fef. 8484-1/4 with acrylic three-color bezel insert with dominant orange or gray color. 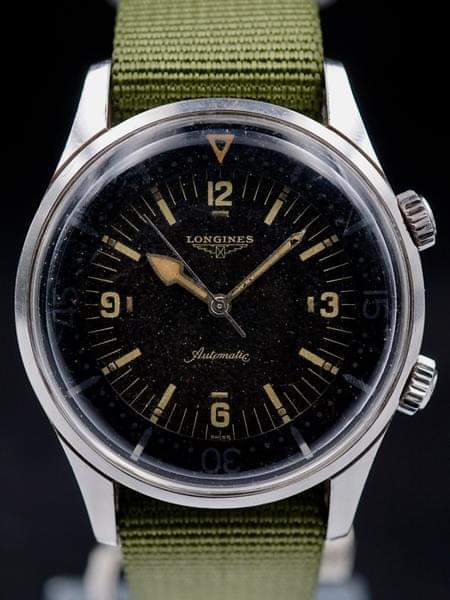 The 70’s are also magnificent gifts from the Admiral collection . One of my favorites is ref. 8557 kal. 508 in a oval case with an orange-black ring insert. Even more famous is the Admiral model ref. 8887 cal. 6652 in a later version of the Super Compressor type case with water resistance raised to 300 meters. 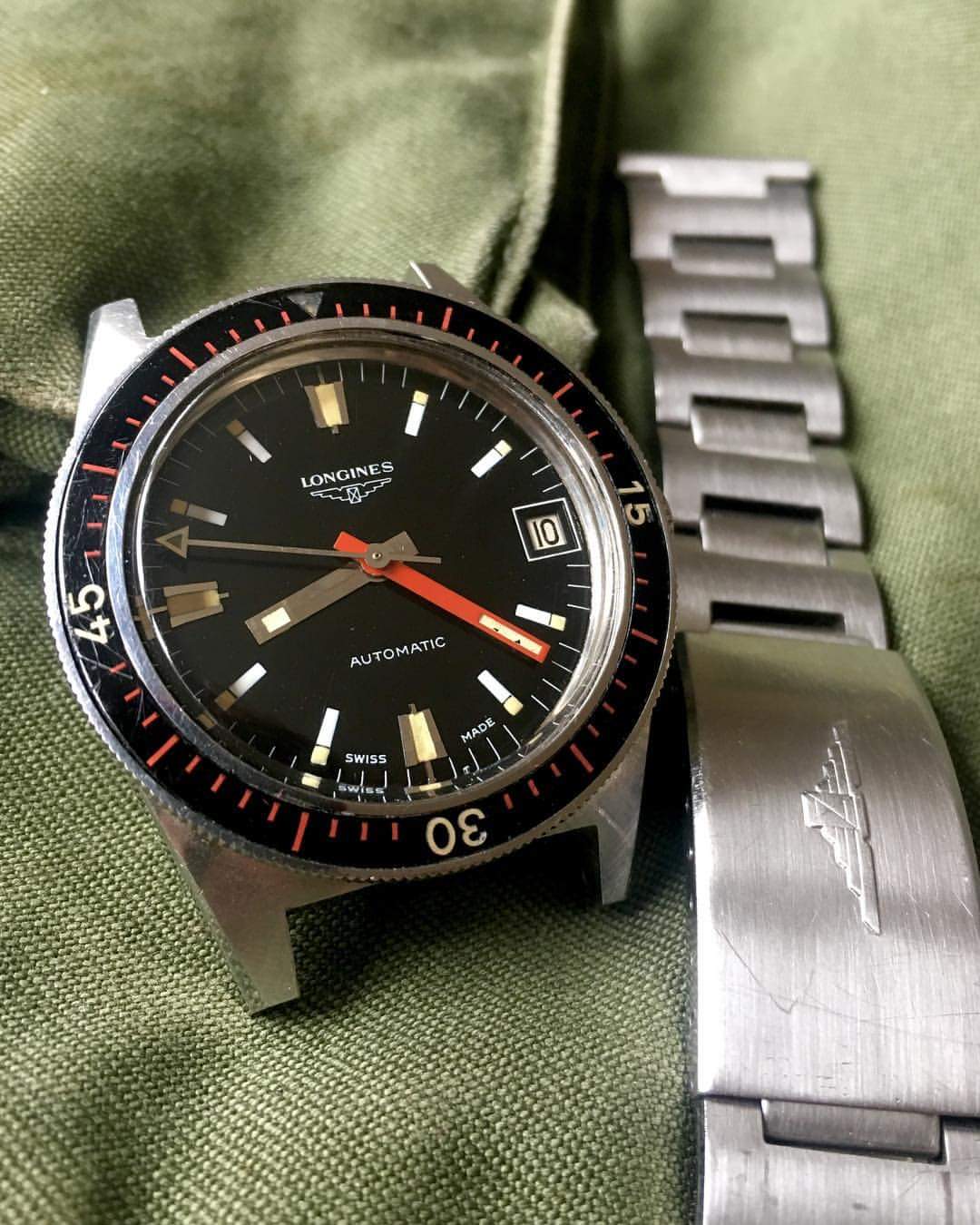 Longines operated as a manufactory until 1983, when it became part of the current Swatch Group and stop produce its own movements. However, diving watches from the winged hourglass logo are a large and interesting group for collectors.

photos courtesy of:
bristnj jeff
SJX
and Others J

Re: The history of Longines diving watches