Impressions of the Field Marshall

Impressions of the Field Marshall 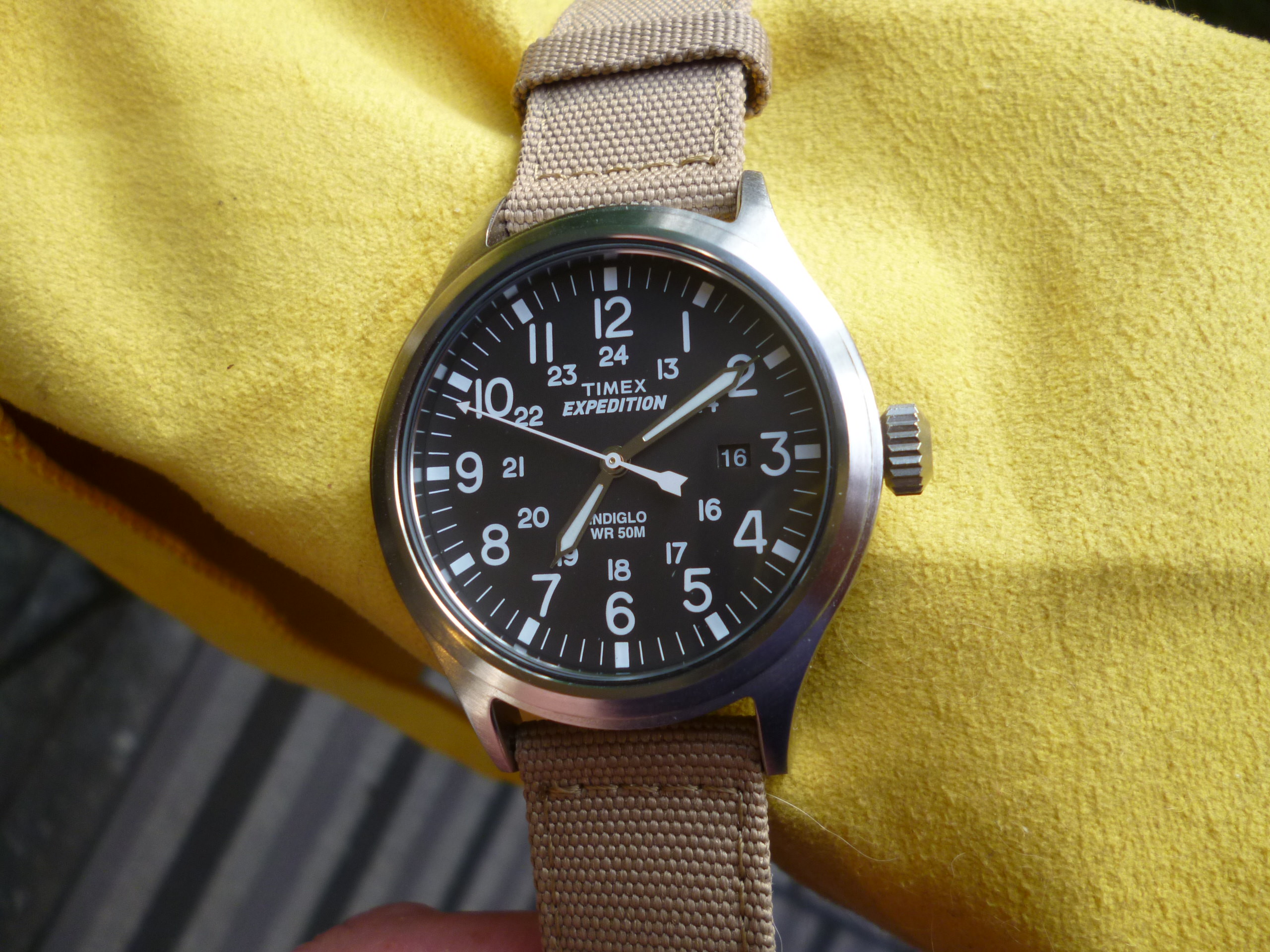 I can't really find anything wrong with this watch.

Officially known as the Field Marshall Blazer Bazinga! von Spunkmeier, aka the Timex Expedition, this watch was handed off to me by Dr. Smells when I met him for a krautburger down Portland way a week ago. The Field Marshall is going walkabout to various Lords, and it now falls to me to find some kind and/or bitchy things to say about him.

There's nothing really wrong with him, however. Well sized at 40mm (43.5 with crown, 10.5 thick, and 49mm lug to lug), he sits well on my 6.75 inch wrist. The dial is classic field watch, with and easy to read dial, numbers clearly printed, and an inner track of 24 hour markers, it's a fine at-a-glance watch. The simple sword-type hands have a small bit of lume applied, but most of the dark-time-telling is accomplished with Timex's very cool Indiglo feature, which backlights the entire dial with a ghostly green glow with a press of the crown. With this feature, the time is easy to read in any lighting conditions, even total darkness. One thing I find particularly cool about the dial is the date window, which is at the three o'clock position, and breaks up the 24 hour scale--indeed, the day I got it, the date was the 15th of the month, and at first I didn't even realize that the watch had a date feature, until I looked closely: 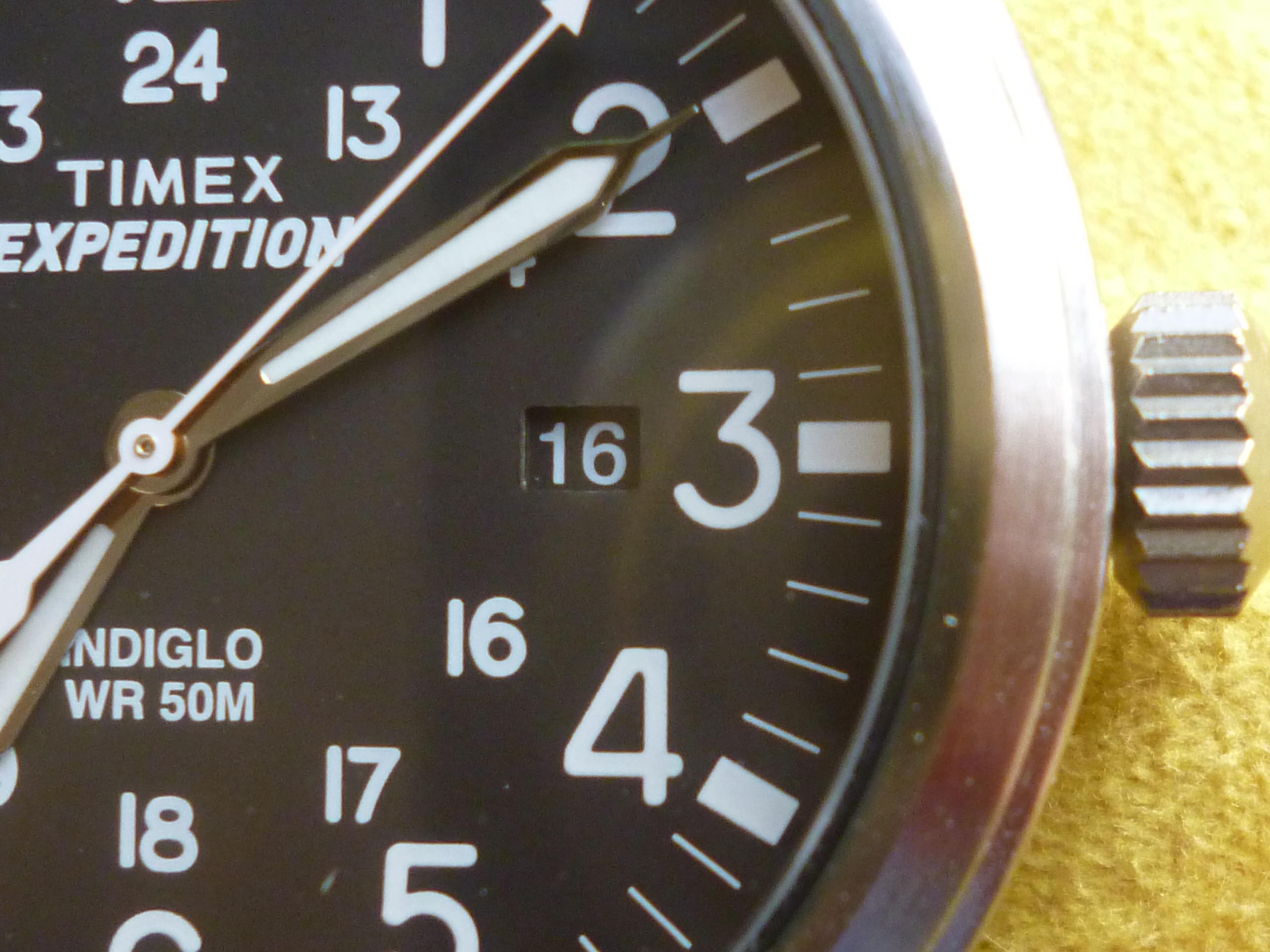 And boom!, there it is, with a reverse printed date wheel; a great feature for those who don't particularly like large date windows cluttering up their dials.

The case is apparently made of brass, with some sort of plating that makes it certainly look like stainless steel. The caseback (with battery replacement number!!) is made of stainless, however: 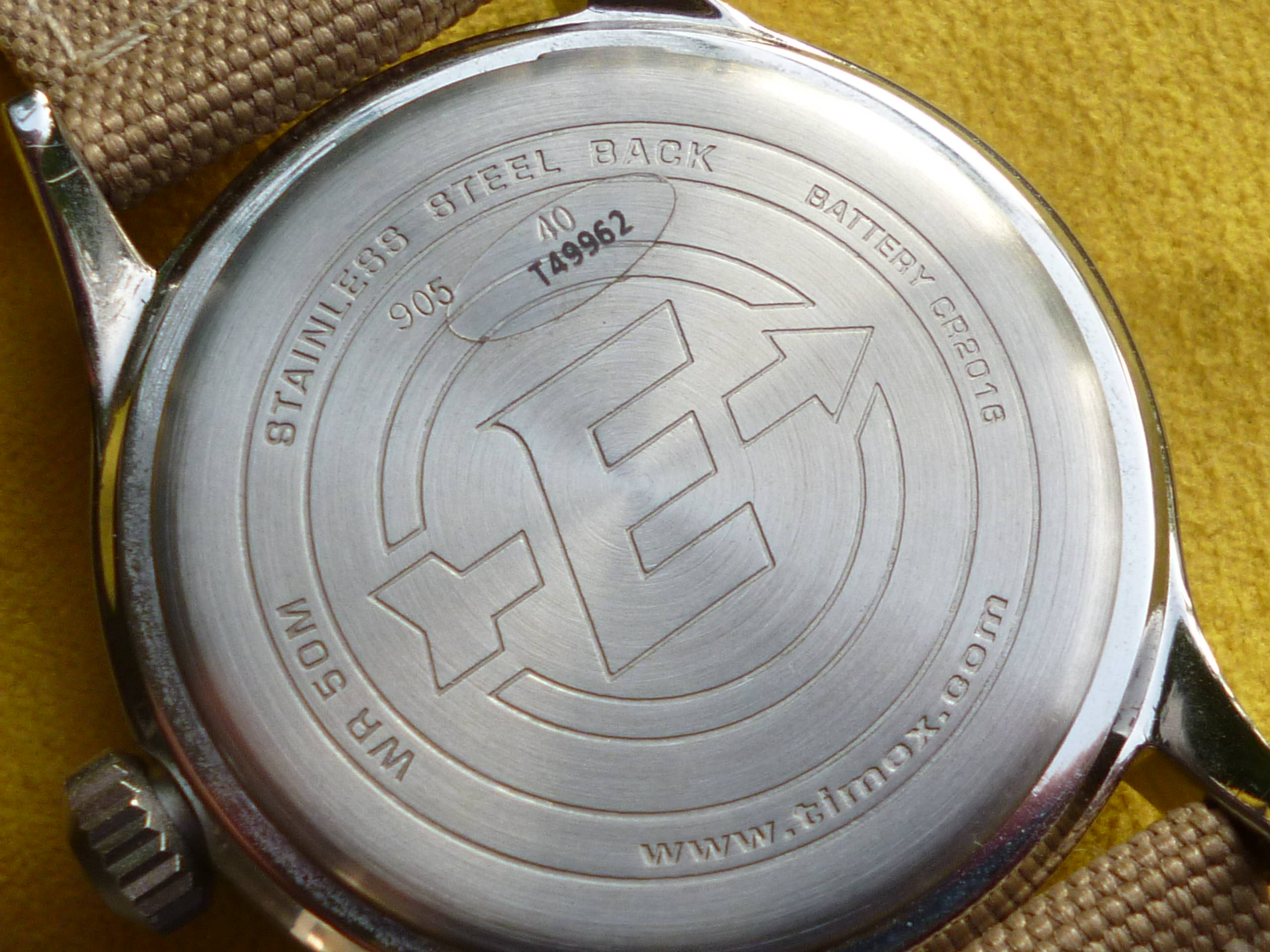 The weight of the watch seems pretty good, giving it a substantial feel; like I said, if I hadn't visited Timex's website and looked at the specs, I would have sworn that the entire case was steel. While the brushing and build isn't going to fool anybody that it's an IWC, the Field Marshall looks pretty damned good, and far better than one would expect for a watch that's almost absurdly inexpensive (you can pick one up at Amazon for less than you'd probably spend to fill your gas tank.)

The strap, made of nylon and in two pieces, so it isn't a ghey-assed NATO, is actually remarkably comfortable. It'll probably hold up well, and when it fails or falls apart, the 20mm lug size would make it easy to replace.

The only real beef I can find with the watch is the timekeeping, which seems a bit slow (it's lost about four seconds in the week I've had it, which puts it right at the very far end of the +/- 15 seconds a month quartz movements are generally spec'd at. The seconds hand jitters like the Field Marshall's had too much coffee, and there seems to be some slop in the sweep. But then, you can buy the Field Marshall at Amazon for $35, so one can't really expect too much. The WR rating is 50 meters, which is probably fine for a field watch, although I would have spent another twenty bucks and picked up the FM's bigger brother, the Expedition chronograph, which gives you the stopwatch function and another 50m of WR.


The Field Marshall on the wrist: 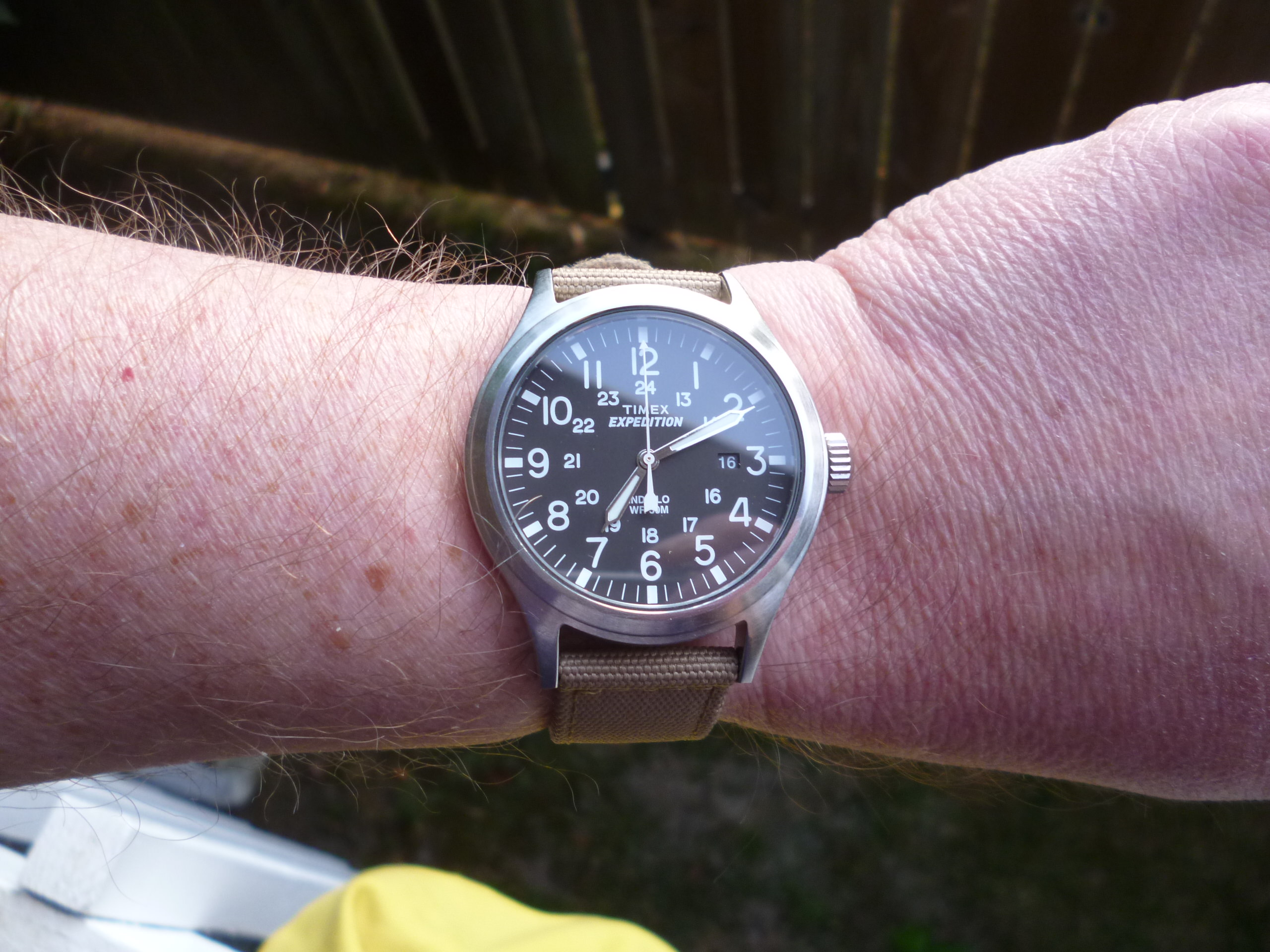 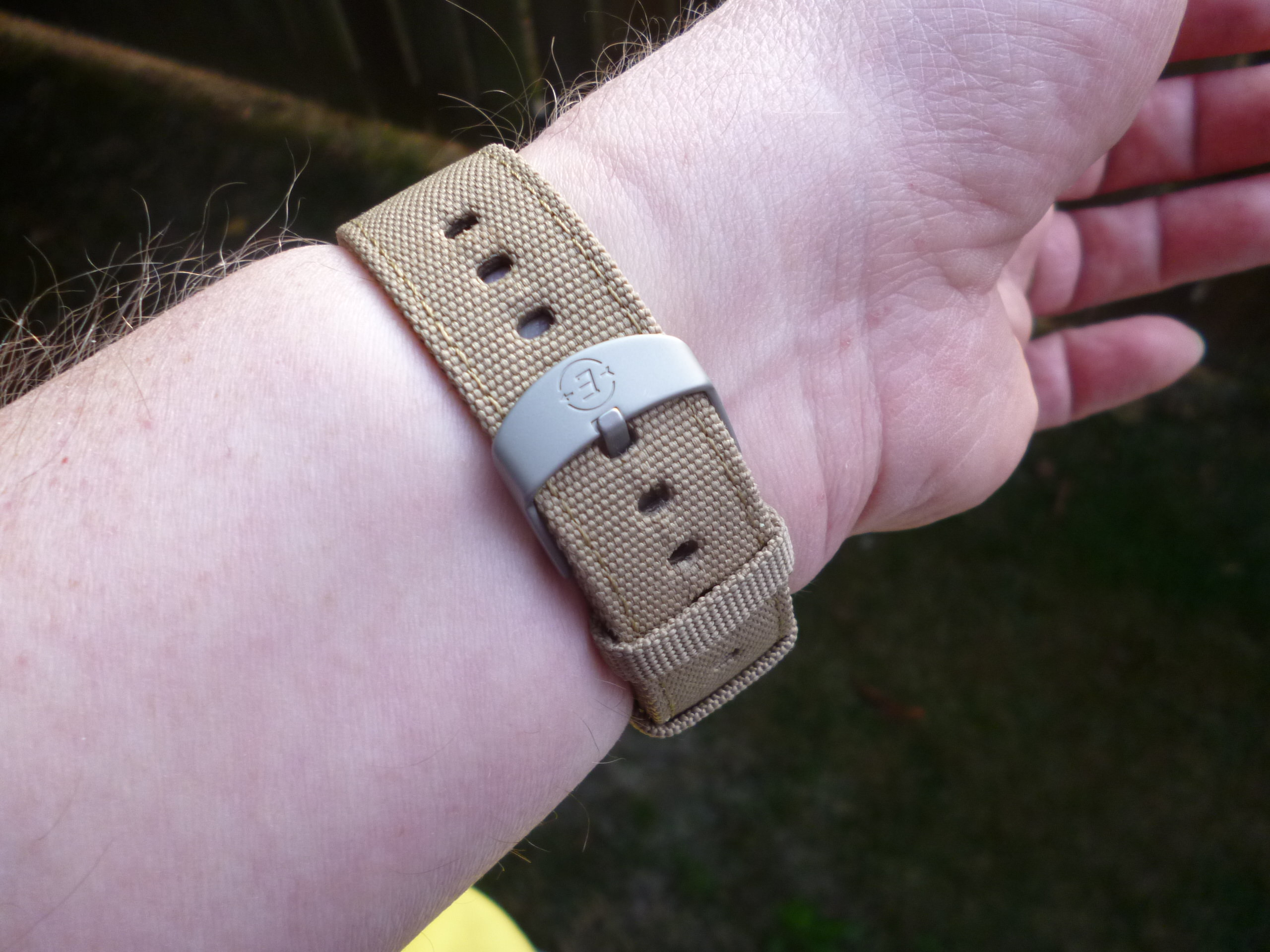 And, to show that he's been having a good time in the PacNW, here's the Field Marshall in front of a fucking tree: 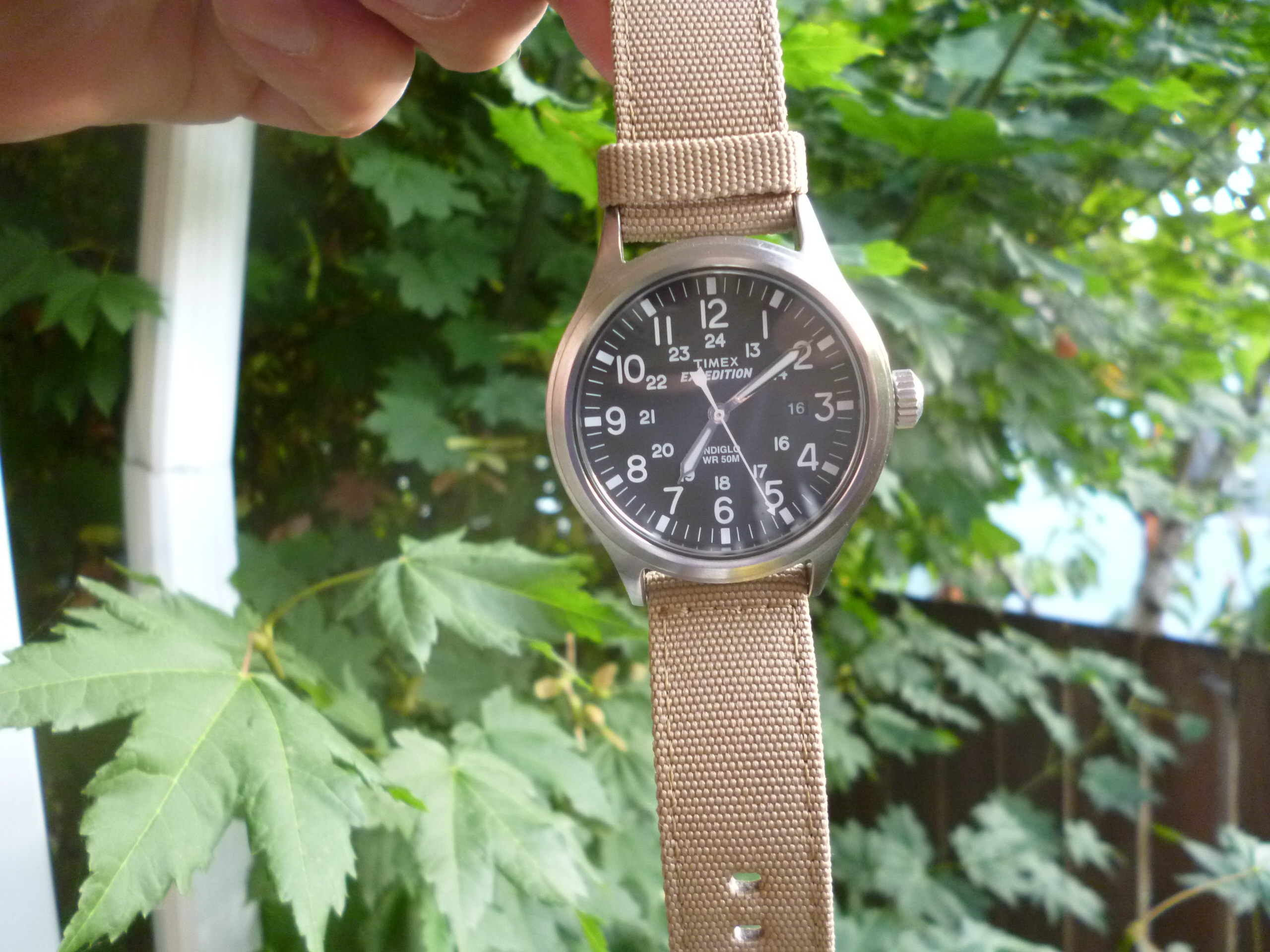 Final thoughts before I send the Field Marshall on his way? Well, I wore him for a few days, and at the end of them I didn't have the urge to hammer a Cabriole table leg up my fucking ass. Quite the contrary: he's a good watch. I'm not the biggest fan of sole-lass Quarts (if I was looking for a field watch I'd probably pick up a mechanical Hammy), but the Field Marshall wasn't in any way a trial to wear. Often, when doing a "how bad can it be?" review, I sometimes look down at the watch I'm wearing to gain impressions and find myself wishing I had worn something else that day--life's too short to wear a mediocre watch. But the Field Marshall isn't mediocre at all--in a way, he's like the Seiko SKX007, a true WIS watch, a great beater, and for somebody who's not a WIS but wants a daily wearer they don't have to fuck around with, the Field Marshall would be a fine, no-brainer choice.

And, Murphy likes him, too!: 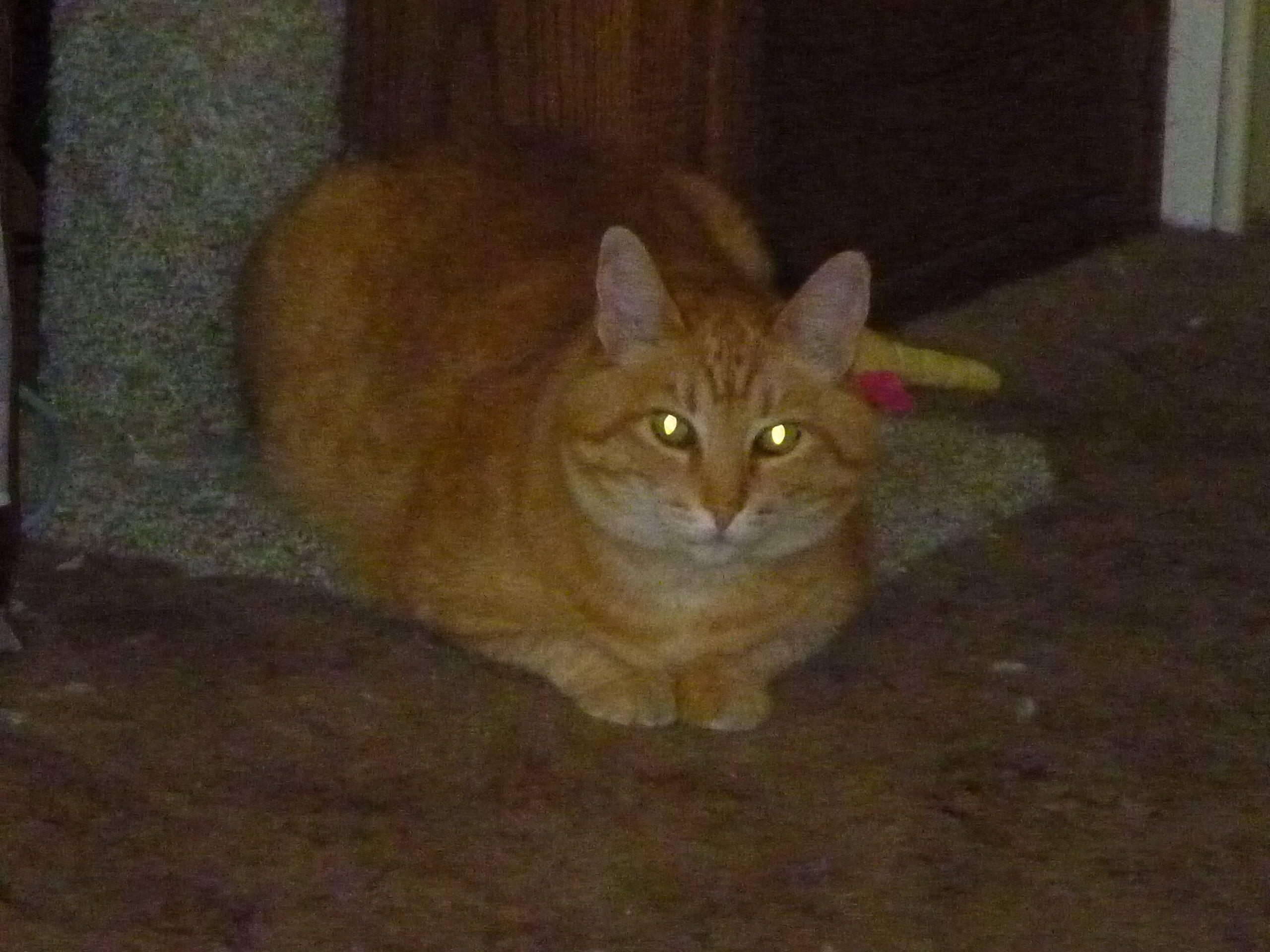 Vary nice imperssions of this fyne waRtch.
Eye have the sayme wArtCh butt difrent. Unfortchunitely it was ate by a Kow!! I found owt when the kow mood Indiglo.

Nice review of phyne timepiece. Your reflections mirror my own. I am surprised by the case material.... had assumed it to be all stainless.

Where is he off to next? Staying in the PACNW?

I'd go for the Seiko 5 equivalent though, which my wife has worn year upon year and seems to have bonded with. She has gone though a dozen or more straps and has no interest in getting another watch - I have offered! 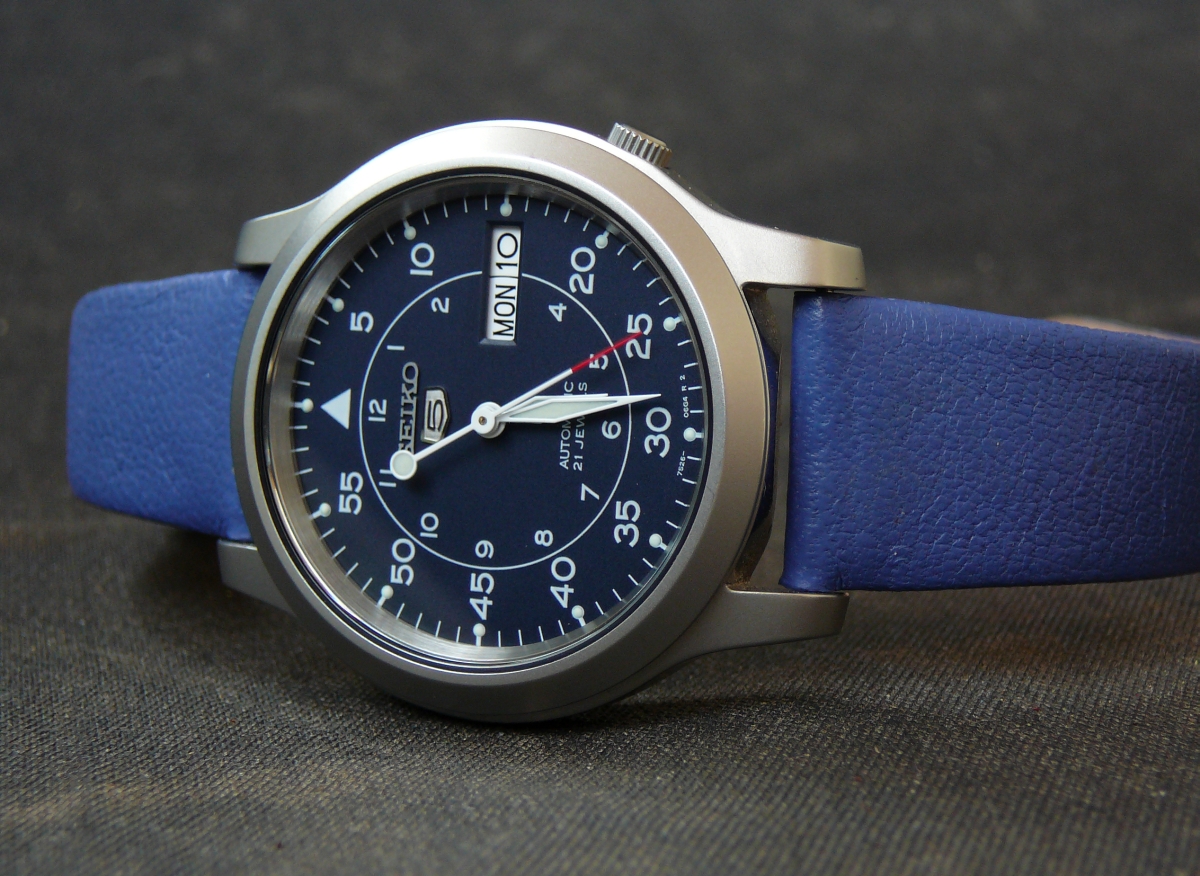 Meritocracy: the privilege, wealth and advancement of those who chose their parents wisely.
Capitalism: a cult that promised to do good for the worst reasons.
Nationalism: a profound longing to go back to a past that never existed.

A very fine review Conj.
Mine has the same issues with the movement. I thought I had a clunker but the stagger must be the norm.
"Old age and treachery will always beat youth and exuberance"

Very fine impressions. Not crazy about the brass case, but seems a good value at the price. I agree with bedlam on that venerable Seiko 5, maybe next time.

The Field Marshall is now on the move again; Juan in Austin, TX should be hosting him starting Saturday--assuming the Jolly Lesbian doesn't fuck things up!!

conjurer wrote:The Field Marshall is now on the move again; Juan in Austin, TX should be hosting him starting Saturday--assuming the Jolly Lesbian doesn't fuck things up!!