Rolex: The Spoils Of War

Rolex: The Spoils Of War 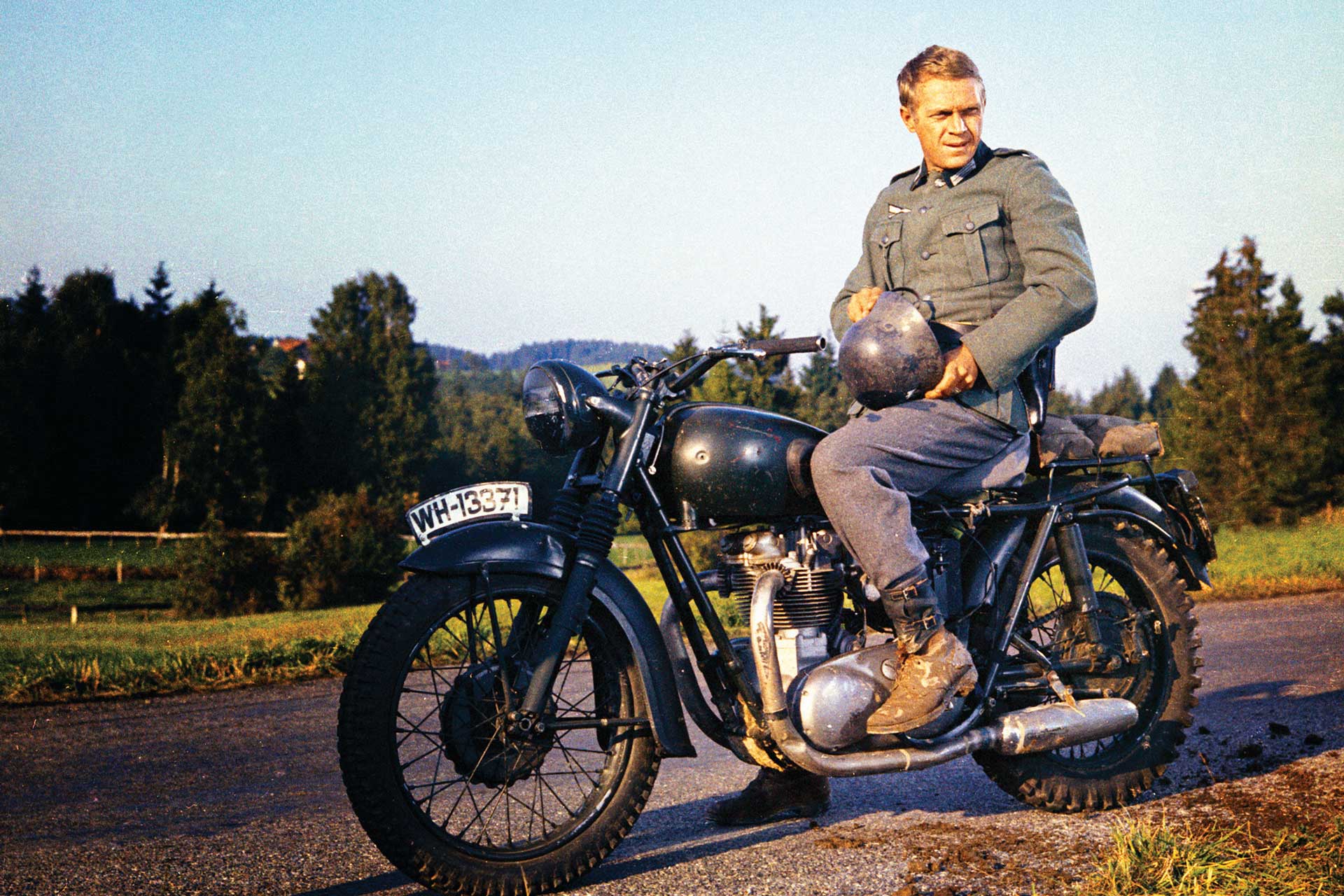 Vintage
23 FEBRUARY 2017
Rolex: The Spoils Of War
During the 1940s, a gesture – as commercially expedient as it was generous – by German émigré and founder of Rolex Hans Wilsdorf, saw the brand become a huge part of the Second World War, and, indeed, cinematic folklore.
by - Nick Scott


The notion of one individual’s outstanding contribution to a just war effort has always been a potently romantic one. Take Alan Turing, the British mathematics prodigy who cracked the German Enigma Code and pioneered modern computing in the process and who was recently portrayed by Benedict Cumberbatch in the film The Imitation Game. Or what about Squadron Leader Wilson Charlton, the RAF bomb disposal expert who defused 200 explosive devices dropped by the Luftwaffe at the height of the Battle of Britain in just 60 days? Then there’s Major General Percy Hobart, the military engineer whose range of experimental tanks arguably determined the outcome of the D-Day landings.

Usually built into these wistfully told stories of game-changing individuals, as is the case with the above mentioned three men, is the hero’s having come from point zero: Men from markedly unexceptional backgrounds changing history is a powerful plot driver. This is not the case, though, when it comes to the watchmaker who founded Rolex and Tudor, and whose individual efforts seal his own place in Second World War folklore. Hans Otto Wilhelm Wilsdorf scarcely sounds a likely moniker for a man who would go on to show great generosity and trust in a spirit of loyalty to the allied cause, but that was the birth-name bestowed upon the man watch aficionados the world over know simply as Hans Wilsdorf. 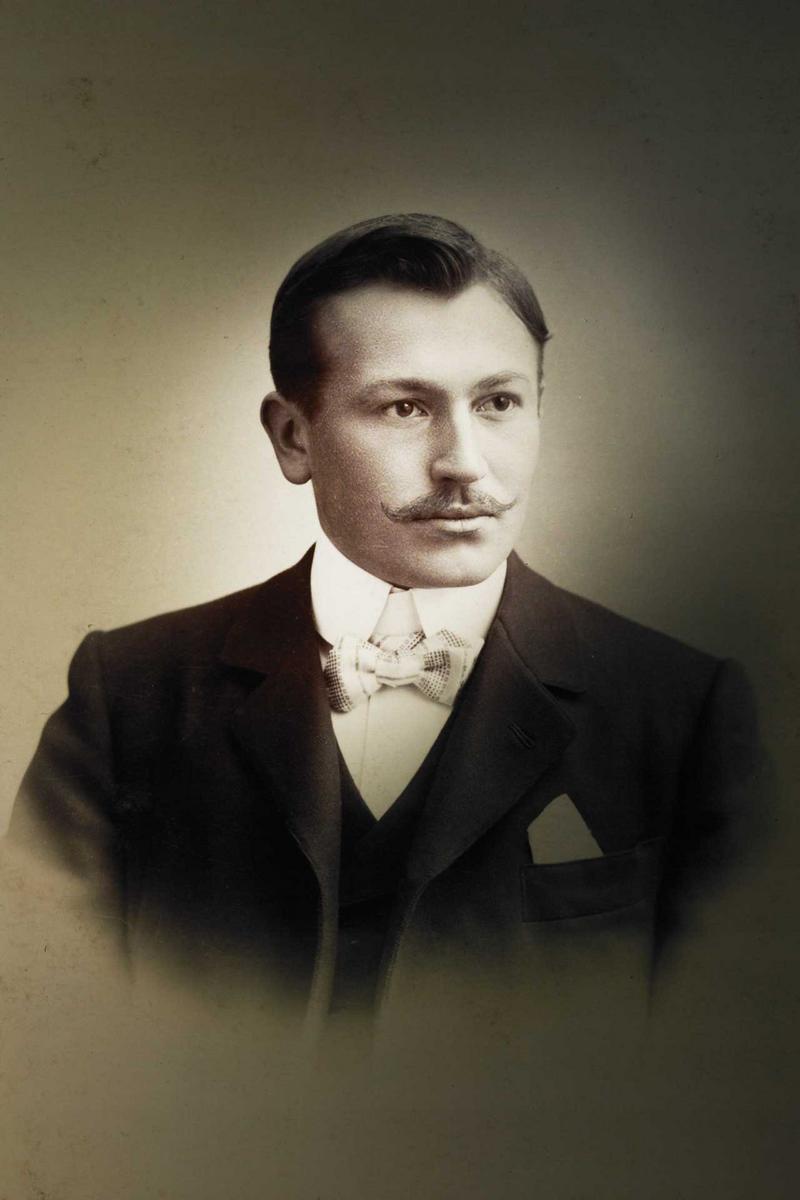 In 1904, Wilsdorf was just 23 when he moved from his native Germany to England and founded Wilsdorf & Davis with his brother-in-law, Alfred. In response to the breakout of the First World War, and the subsequent hostility administered to anyone with a Bavarian accent on British streets, he moved Rolex’s headquarters to Geneva. He changed the name to The Rolex Watch Company Ltd in 1915, in all likelihood because the distinctly German phonetics of his own name could prove a commercial blight.

The years between the wars were lucrative, with Rolex enjoying a huge market share, thanks to holding patents on the waterproof Oyster case and the automatic ‘Perpetual’ movement, but the Second World War seriously impeded the company’s progress as a commercial entity, as export in and out of neutral Switzerland became impossible. Things reached a head when, in 1942, with the pendulum edging towards an allied victory, a crucial rail link through Vichy, France was severed, leaving Switzerland entirely surrounded by the Axis nations, cutting the country off from the international markets beyond its own frontiers. 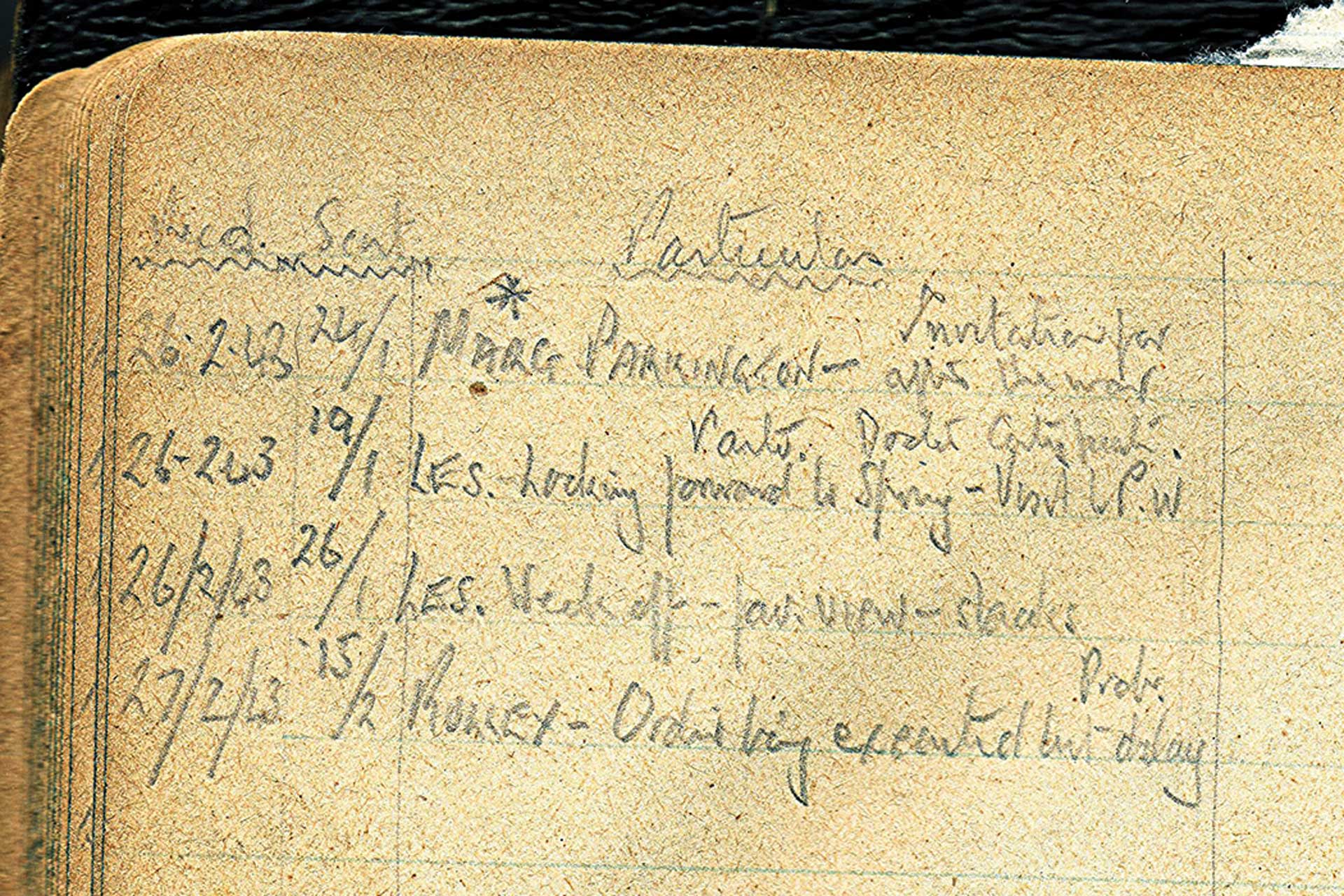 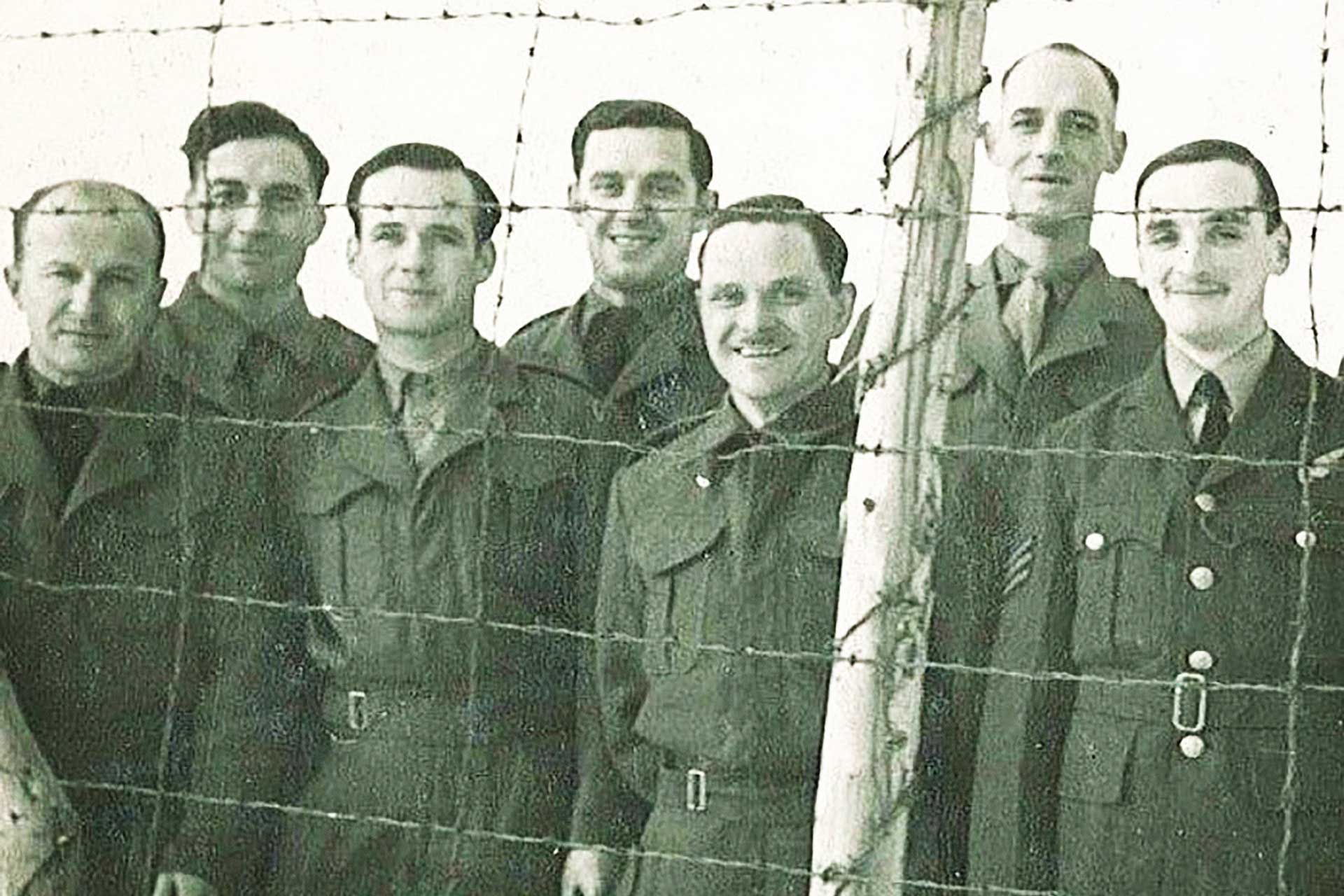 Wilsdorf, however, realised he had a captive market – in the most literal sense of that phrase – just across the border in Germany. Gambling on an allied victory, he offered British officers in the prisoner of war camps Rolexes to replace watches that had either been looted by Nazi camp leaders or seized on the grounds that they might contain a hidden compass (The British Secret Service often got humanitarian groups to distribute escape gear to PoWs, including, on one occasion, silk maps sewn into Monopoly game boards).

The condition for providing the watches was that recipients wouldn’t have to pay for the timepieces until after the war was won. Requests for a watch of their choosing could be sent by letter via the International Red Cross, which, like Rolex, was based in Geneva. The watches would be sent back, often with a personal note from Wilsdorf reading: “You must not even think of settlement during the war.”

A good number of Royal Air Force pilots had already ditched their standard-issue watches in favour of the notably more reliable, durable and accurate Rolex models, but for many, Wilsdorf was offering an attractive upgrade. As well as giving morale in the camps a much-needed shot in the arm, the timepieces would also be particularly useful for escape. And so it proved true, including perhaps the most famous escape of them all: the audacious breakout of the Luftwaffe-run PoW camp Stalag Luft III, immortalised by Steve McQueen, Charles Bronson et al in the seminal movie that celebrated its 50th anniversary, four years ago: The Great Escape. 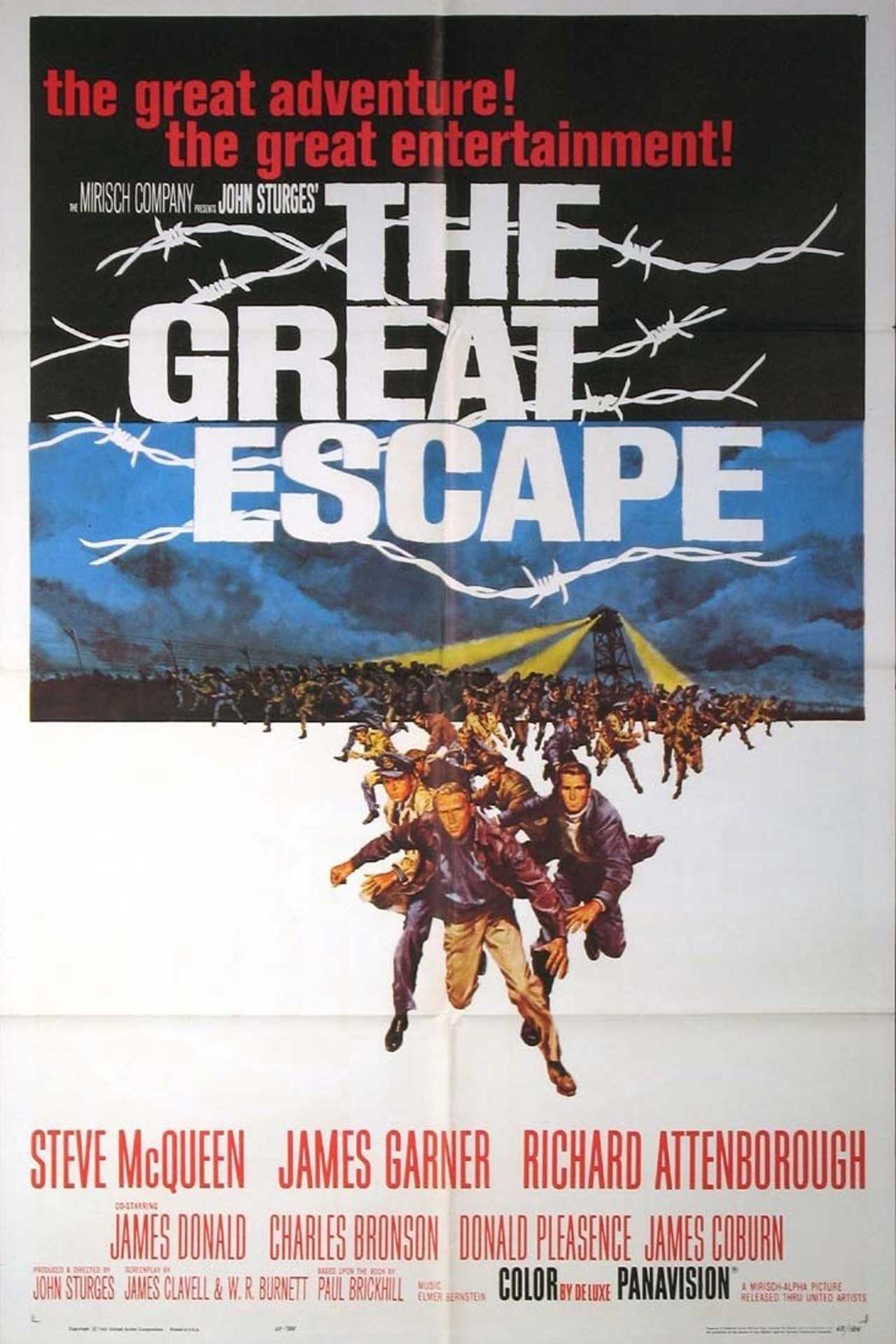 The Rolex Oyster Chronograph worn by Flight Lieutenant Gerald Imeson, who was one of the ‘penguins’ – the men who sprinkled soil dug from the tunnels onto the grounds via holes in their trouser pockets, as depicted in the movie – fetched £30,000 when it was sold at Bourne End Auction Rooms, Buckinghamshire in October of 2013. Imeson was not one of the 76 to successfully breakout, and went on to wear his chronograph throughout the gruelling forced marches through Germany in the winter of 1945, to evade the encroaching Russians. He ultimately survived the war, though, and paid his SFr.250 bill (equivalent to £15 12s 6d) to Rolex in 1947. 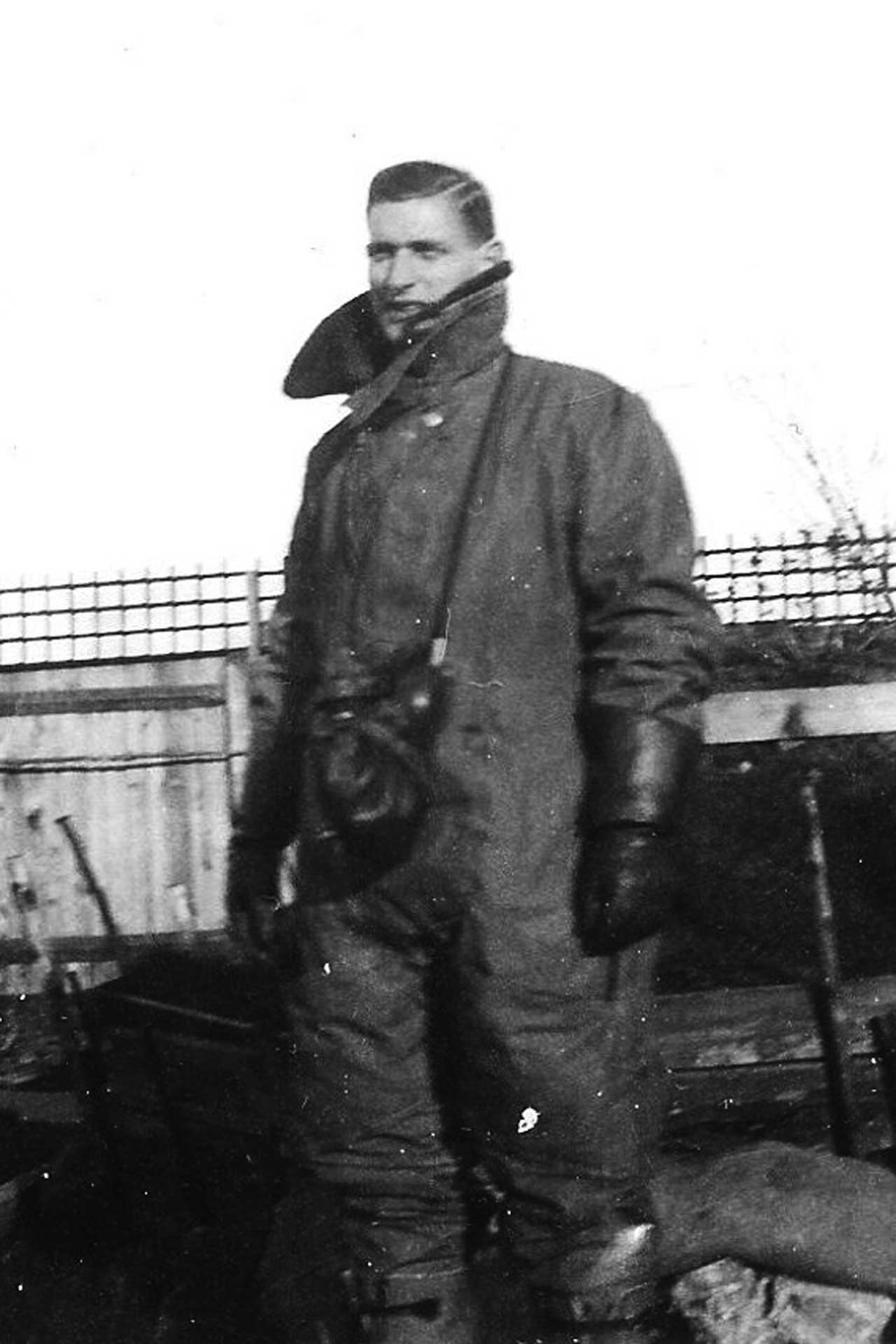 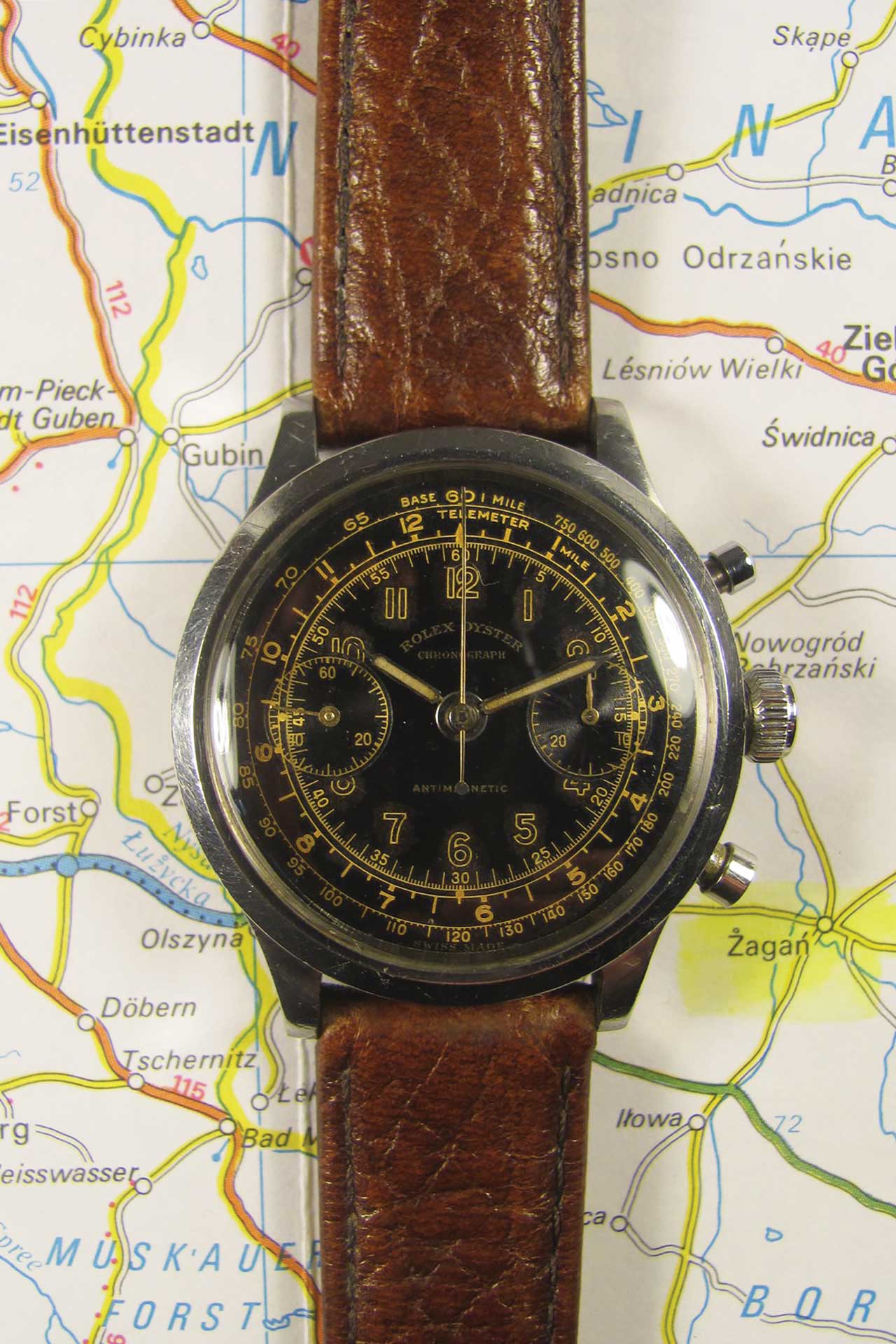 Imeson wasn’t the only escapee to take up Wilsdorf’s kind offer: Clive James Nutting, a Corporal in the Royal Corps of Signals, ordered a stainless steel Rolex Oyster 3525 Chronograph identical to Imeson’s, intending to pay for it with money he saved working as a shoemaker at the camp. Despite Nutting being a non-commissioned officer, Wilsdorf took to him on the basis that he requested the pricey Rolex 3525 Oyster chronograph, while most prisoners opted for the more modestly priced Rolex Speed King model.


According to Bourne End Auction’s watch and clock historian Martyn Perrin: “Flt. Lt. Imeson ordered his Rolex model 3525 in December 1942 and received an acknowledgement from Rolex in February 1943 stating there would probably be a delay. Less than two weeks after this, Cpl. Nutting ordered the same model watch from Rolex. Both watches were received at Stalag Luft III on the same day i.e. 4 August 1943. 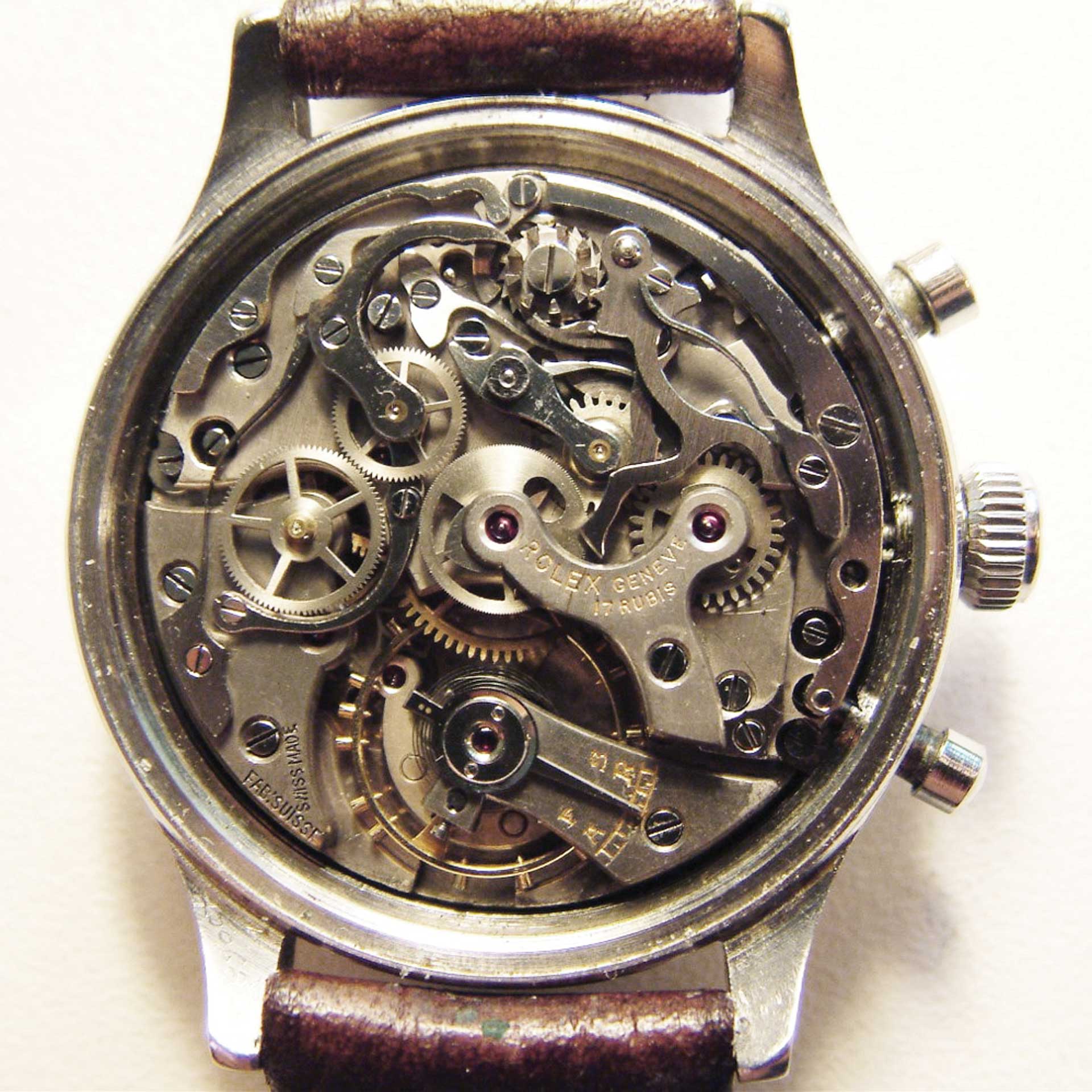 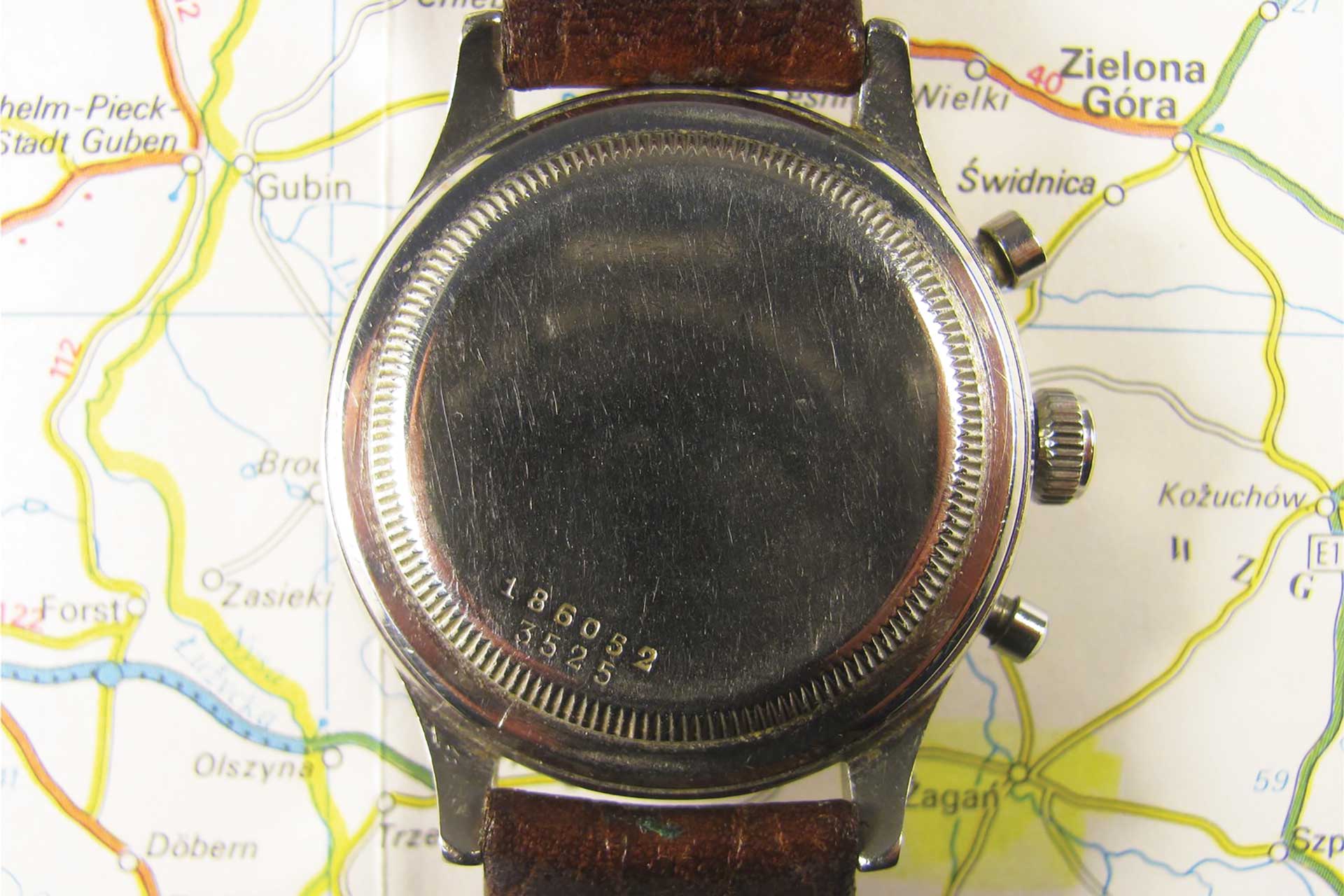 “It is, therefore, quite probable that Imeson told Nutting about his order and the confirmation letter he had just received, which prompted him to order the same model watch. It has been speculated (and is quite possible) that both watches could have been used to time events in the run up to the Great Escape.” Nutting in particular is thought to have used the watch to time the prison guards’ patrols and also to time the 76 escapees through tunnel ‘Harry’ on 24 March 1944.

Wilsdorf’s simple gesture was taken up vociferously. Over 3,000 timepieces were ordered by British officers in the Oflag VII B PoW camp in Bavaria alone. But was it simply an extraordinary act of benevolence? A pure statement of his passion for the allied cause? Or was it an ingenious publicity ploy? When it comes to the latter theory, Wilsdorf had previous impressive form. When Rolex made its 100,000th Officially Certified Rolex Swiss Chronometer (just one year after having reached the 50,000-mark: a feat which had taken four decades), he ambitiously decided to gift the Rolex Datejust in pink gold to Sir Winston Churchill, who keenly accepted. The 150,000th ended up on the wrist of Dwight D. Eisenhower. It’s pretty clear that Wilsdorf was eons ahead of his time when it came to expedient marketing schemes.

But it remains a phenomenal stroke of genius-slash-generosity. Wilsdorf would have known that he might never retrieve the full prices for the watches, even after the war, due to import/export restrictions at the time (remember, Imeson’s watch only yielded a £15 payment at the end of the war). He would also have anticipated that it would be a year or two after peace settlement before foreign exchange resources would be available so that the bills could be met. Apparently, despite Rolex never chasing for payment, every single officer who ordered a watch honoured the debt. When it came to those who perished, quite often their relatives tried to settle the bill. 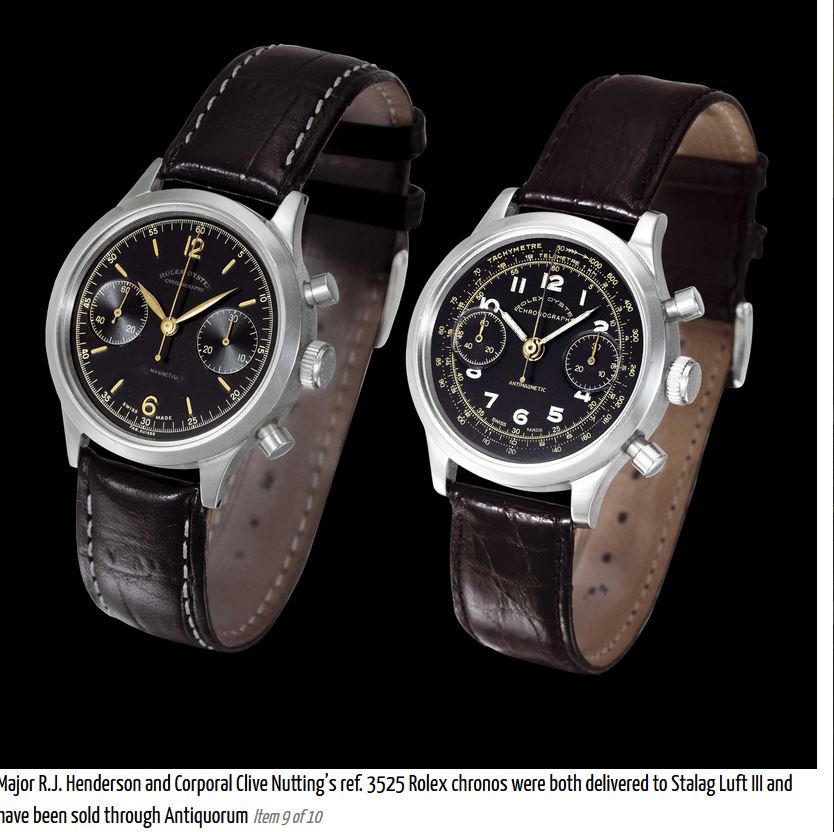 One can only speculate as to what the Germans made of one of their own making such an offer to the enemy. The whole episode also highlights the changing culture of military endeavour: it’s nothing short of extraordinary that, as little as seven decades ago, the rules of war were so much more polite that PoWs could receive a package delivered by the International Red Cross. 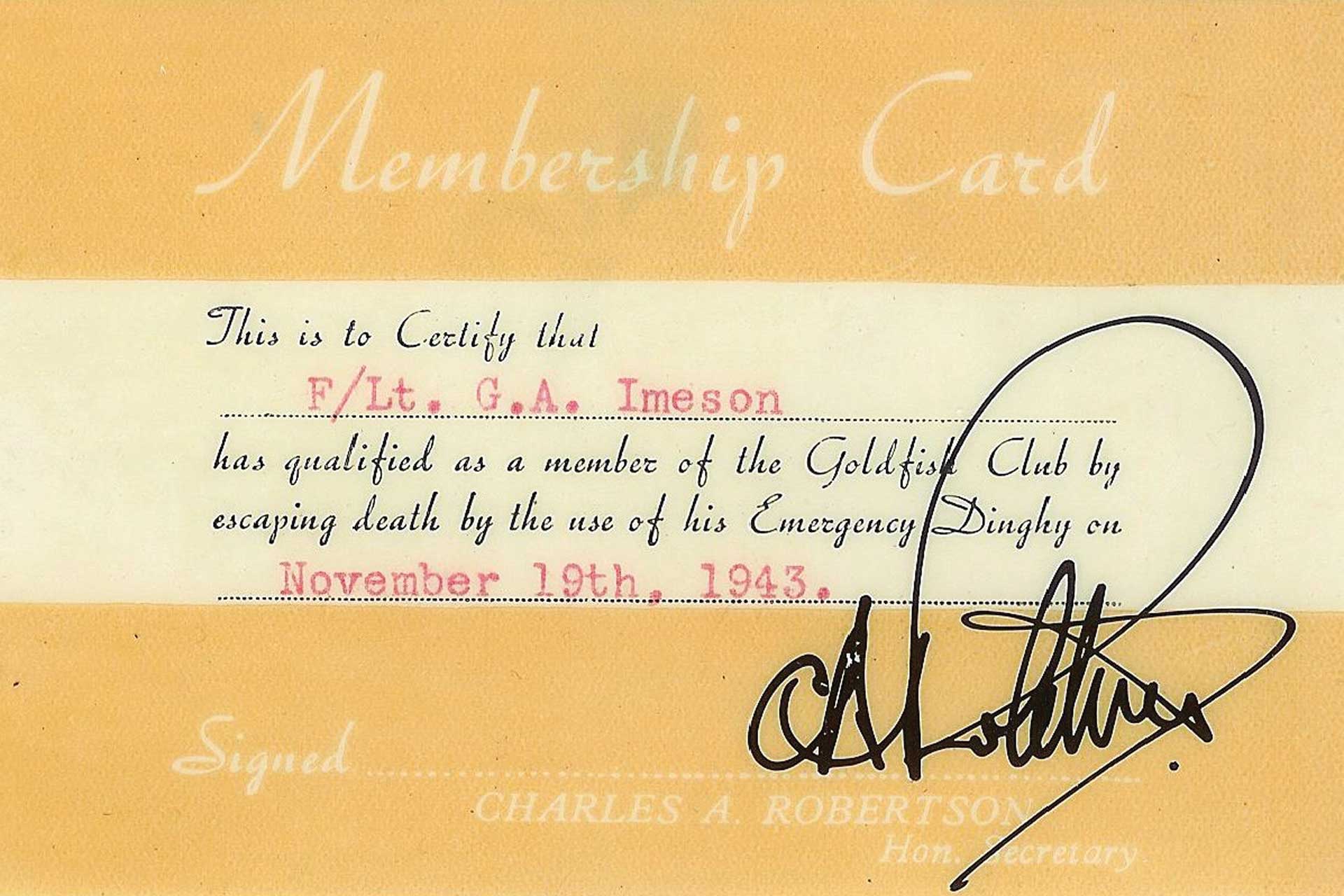 Of the many intricate wefts and warps in the rich tapestry of horological history, it is surely one of the most eye-catching.

Re: Rolex: The Spoils Of War

Re: Rolex: The Spoils Of War