You have waited, and waited, and waited... and here it is! Lads and lasses, it's time. In this instalment of your favourite watchdog/comedy series, as always there will be some nasty stuff being exposed as what it really is. Time to put the kettle on, get a cup of tea, put on some invigorating tune (Green River by CCR does the job nicely), and let the show start. Take a seat, fasten your seatbelts, this is your Bring a Brain!

First, let me kick off the show with the column, to which Bring a Brain owes its name, and which has recently (and unfortunately) been revived.
https://www.hodinkee.com/articles/bring-a-loupe-august-24-2018

Let's have a look at the watches being hyped there.

First up, the square Rolex. That dial, frankly, does not inspire confidence. 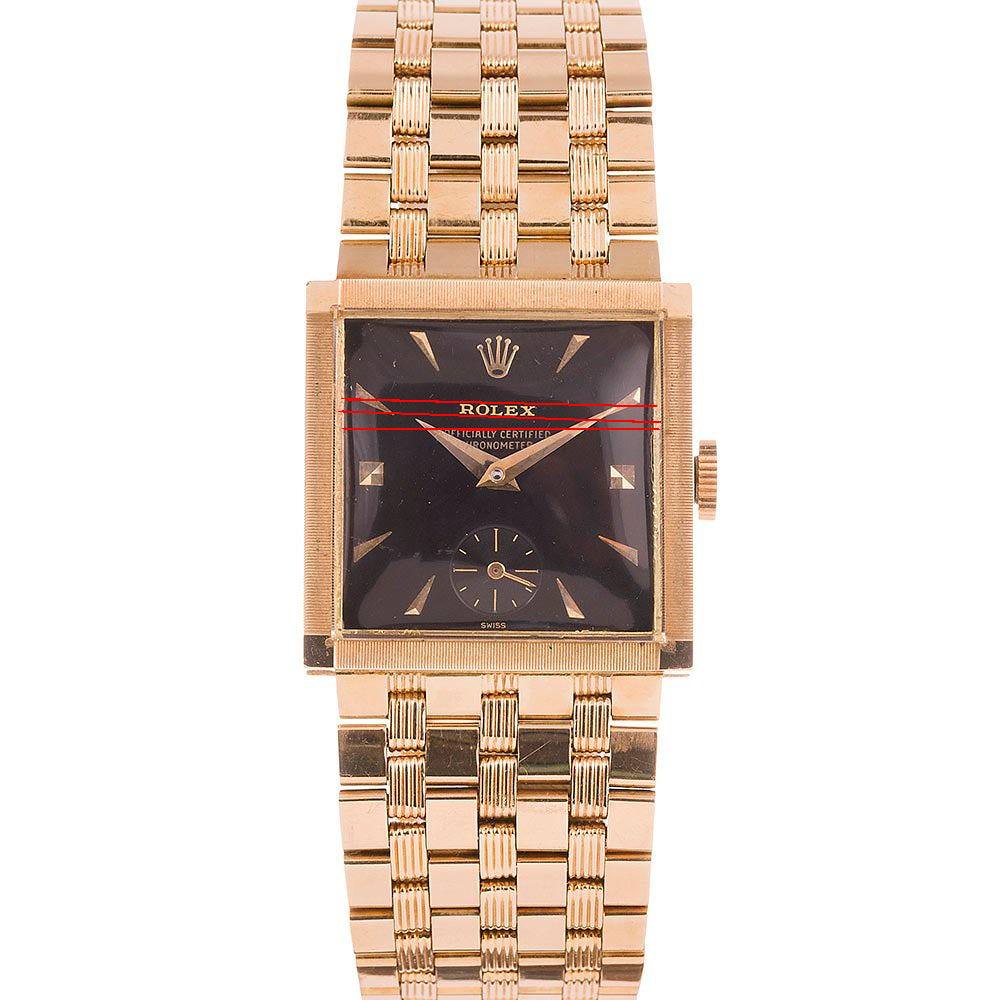 The Rolex print seems to be done in a brighter tone of gold than the rest of the inscriptions. But that's just one issue. Look how tilted it is in relation to the hour markers and the "officially certified" script! 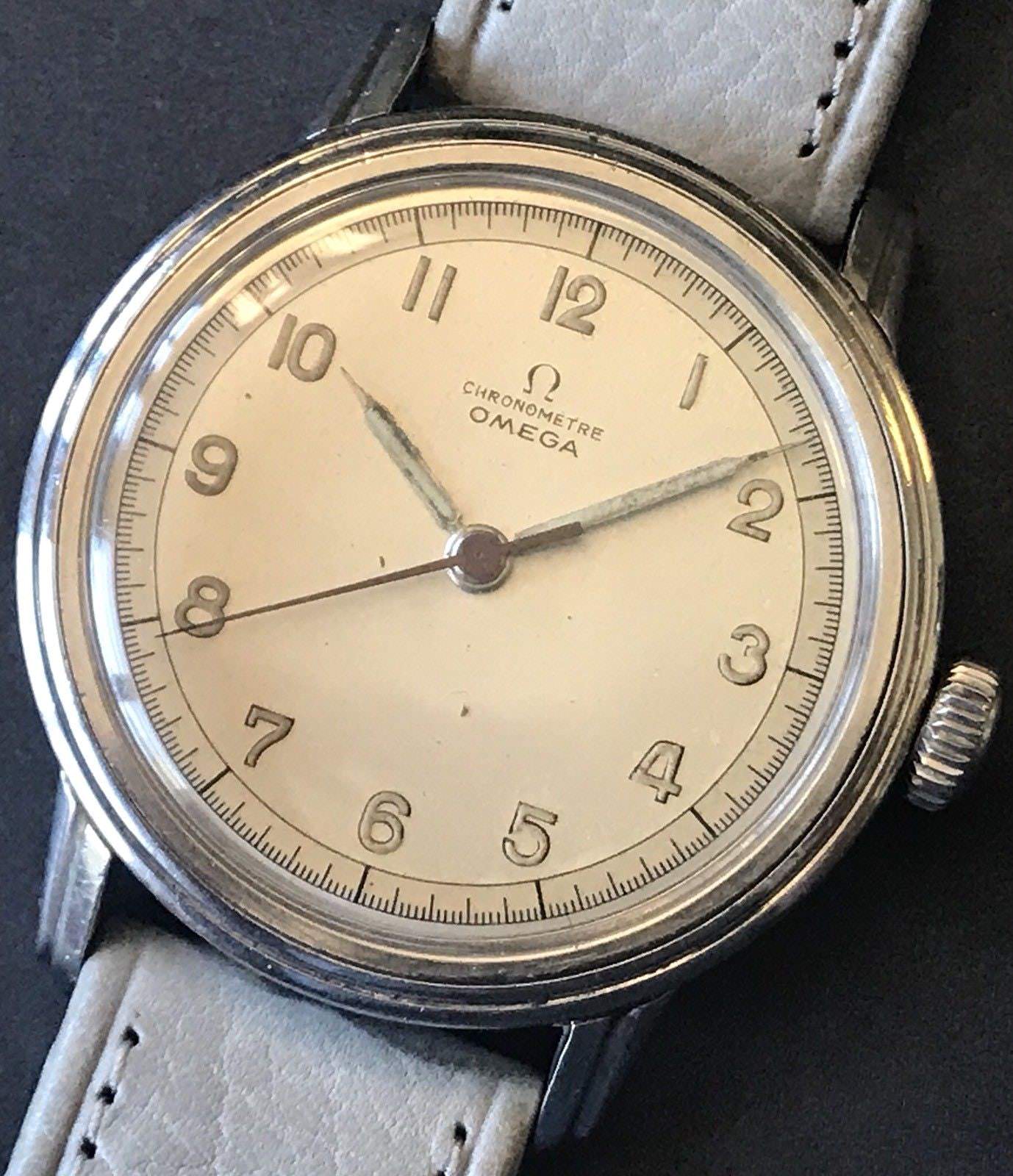 This is - in all likelihood - not the original dial. While 2254s, even with the 30 T2 SC and not the RG version (some of them supposedly had the RG) had the "chronometre" marking, here it is done in a manner not consistent with any other 2254 to be found anywhere. The "chronometre" inscription in 2254s formed an "arch" over the Omega logo and script. The way it's done here is only consistent with later chronometers featuring different versions of the 30 T2 RG (PC RG, SC PC RG, and so on). Also, the Omega logo does not appear to be correct - the "feet" of the sign are spaced too widely, noticeably wider than in other 2254s.
Is it a redial? I don't think so. Is it a replacement dial? Most likely. Given that the lume appears to be radium, I'd say it made its way into the watch prior to 1960.

Let's move on to another watch featured, the 1950s Eberhard.

We've said it before, but I don't mind repeating it ad infinitum: a great watch doesn't have to break the bank.

That's very true, although since it comes from Hodinkee, it's awfully ironic.

And here, dear Isaac, is what I don't mind repeating ad infinitum, and I will repeat that over and over, until the end of the world and a day longer: IF IT'S NOT A PATEK, IT'S NOT A BLOODY CALATRAVA!!! Just as there is no such thing as a Seiko Seamaster, Hamilton Datejust, or any other such idiotic contraption, there is no Longines Calatrava, Omega Calatrava, IWC Calatrava, or any other Calatrava that's not a Patek.

Let's finish it off with one listing from the Shop - this Omega:
https://shop.hodinkee.com/collections/vintage-watches/products/1970s-omega-seamaster-reference-166-010?variant=12231856717899

"Light spots of oxidation" isn't exactly the right way to describe rust chewing into the rotor, is it? Sometimes I feel relieved these guys don't sell cars - if they'd mention the floor as having light spots of oxidation, this would mean that the floor has been eaten away by rust, and you could actually pull off the Fred Flintstone thing in it, with legs going right through the floor, and feet flat on the ground.


Let us move on to other sites. It's time to visit the listings of the King of Cape Cod, Archduke of Redials and the Knight of the Round Dremel, VintageCaliber!

Let's have a look at this ultra-thin VC:
https://vintagecaliber.com/collections/all/products/1963-vacheron-constantin-ref-6115-ultra-fine

They haven't polished the case, now that's something new! However, the dial raises suspicions. First of all, the "&" disappeared from the brand name after 1970, how can this be the case with a watch supposedly from 1963? Besides, looking up the reference shows specimens from after 1963, with the correct Vacheron & Constantin inscription. A service dial, l suppose.

The one good thing about that shop is the fact that it doesn't seem to often find too many people with a deficit of intelligence serious enough to be willing to part with their money in exchange for their wares.


Now, it's time for the shop that truly deserves the honourable title of Knowers of Nothing. Lads and Lasses, Theo & Harris!

That it's an obscene price for a not particularly desirable gold-cap, that's one thing. What is really beyond me, is how on Earth can anyone even consider buying a vintage Connie without movement pics, as well as detailed pics of the case (both sides of the case back, most importantly). OK, for a change they have identified the movement (not unlikely with a lot of effort, it's so hard to notice it right in front of one's eyes). So what? With no reference number provided, there's no telling if it even belongs in the case that it's in!

It's hard to tell if these hands belong with that style of markers, as thanks to the fact that they've made no effort to perform even a basic identification/authentication and provided no reference number, this can't even be looked up. Oh, and by the way, what are these lovely blotches by the hour markers? Glue?

So, you suddenly find yourself with a spare 1385 bucks - what do you do? Well, T&H suggests that you should spend it on a run-of-the-mill Geneve with a dial seasoned with humidity-inflicted damage - which damage, according to them, is "beautiful aging." May I offer a recommendation, dear T&H (sounds odd, as there is neither a Theo nor a Harris actually there...)? Visit an ophthalmologist, and start doing any research at all. Like, ask Uncle Google, because you never make the effort to do as much as that...


That's all for this instalment of Bring a Brain. Hope you found it entertaining and educational, and - as always - Bring a Brain will return if necessary!
I always hope for the best. Experience, unfortunately, has taught me to expect the worst.
Elim Garak, Star Trek: Deep Space Nine

Another fun installment. On the Rolex, I wonder if the crystal is causing distortion. 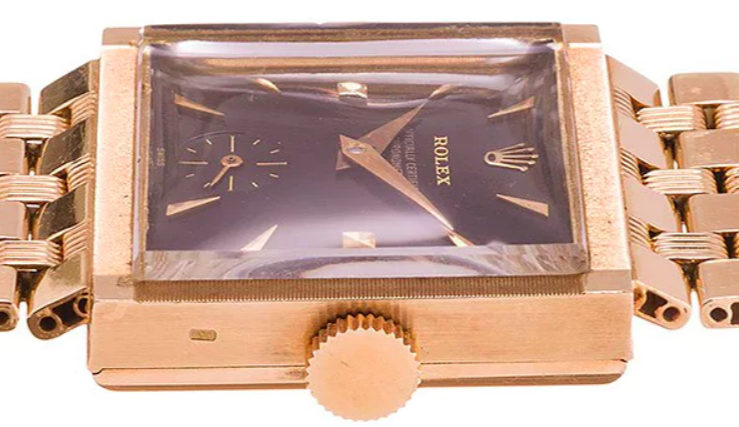 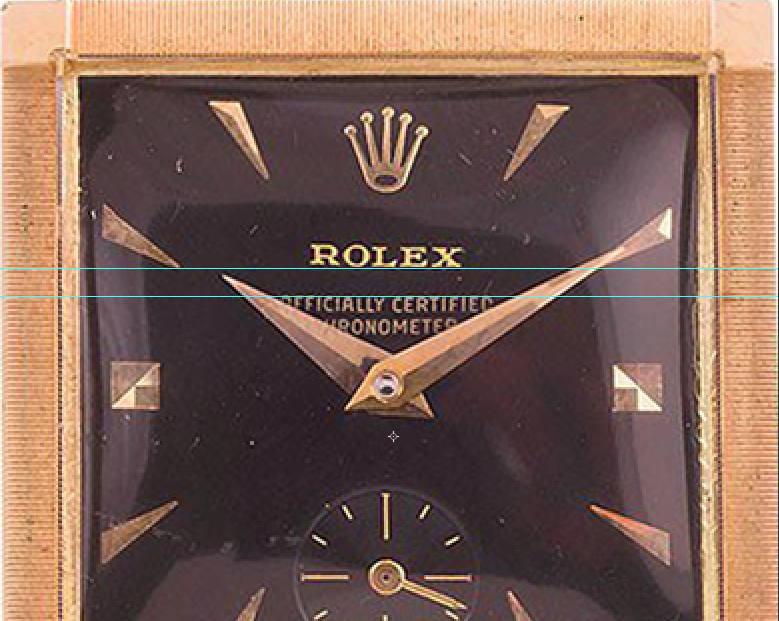 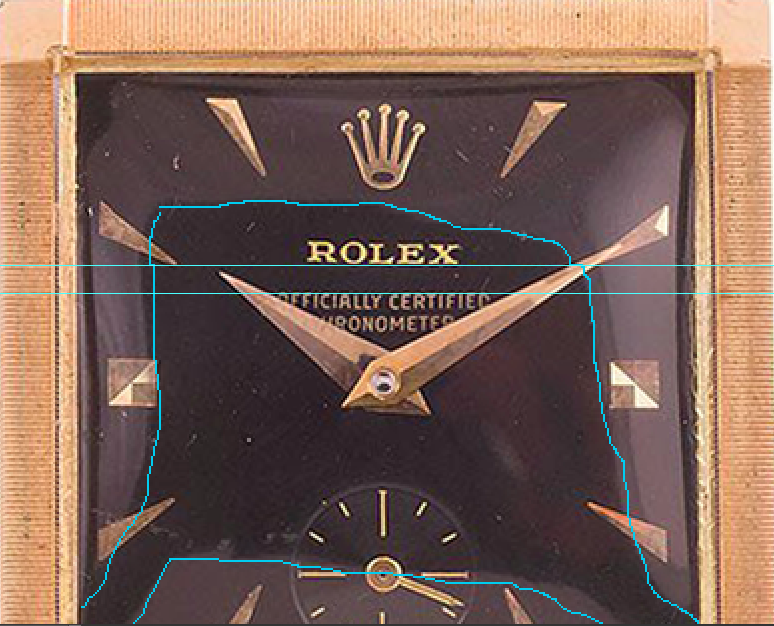 I've been keeping an eye out for a 2254 local because of the dials; the watches are hard to come by in minty shape. Found an RG but even as simple as the cal is, it was too toasty to bother with It was early- I'd like to find one (post '42 AIR) with the Incabloc device doohickey.

The dial as you note is all wrong; interestingly regarding the OMEGA, whomever put together the dial used the mathematical symbol OMEGA as evidenced by it's wide stance and ever so slightly different feet in stead of the actual letter.

Be interesting to know if the Rolex was 750 and what the movement was like- sloppy at any rate, worse if the watch is genuine.
^^^Copyright

I had a hard time determining which explanation for the issues with the Omega dial is the most plausible - redial or service dial. The minute track is OK, font within the norm, signs of aging are there. What makes me lean towards thinking that it's a service dial, is that Omega service dials used back in the day, as well as service dials for vintage pieces used now, always are inconsistent with the original dial. Replacement dials for the 1960s Connies lack the noticeable serifs on the whole "chronometer" inscription, 1970s service dials for 1960s Speedmasters have short hour markers not obscuring the minute track (almost all pre-Moons had long markers) and a different spacing in T SWISS MADE T, and so on.

However, regardless of what it really is, it's still not the original dial, and so - the watch is a fucking lemon.


As to the Rolex, even with the new lines determining the alignment, the R is still tilted and floating above the line, the O is still tilted all the same, and still the paint used for "Rolex" is brighter than the rest of the printing, which doesn't seem to ever be the case with Rolex gilt dials. Besides, a crystal distortion can cause an illusion of misalignment, but in shots taken at an angle - the photo in Bring a Loupe is a pretty straight-on shot. A sharper curve of the crystal above the font can make it look incorrect, but not tilt it or rotate just one or two letters around their own axis...
I always hope for the best. Experience, unfortunately, has taught me to expect the worst.
Elim Garak, Star Trek: Deep Space Nine

No good deed ever goes unpunished.
Rule of Acquisition no.285
Post Reply
4 posts • Page 1 of 1