This was originally posted at FB by Mateusz Piechnik. Photos are from his post there. 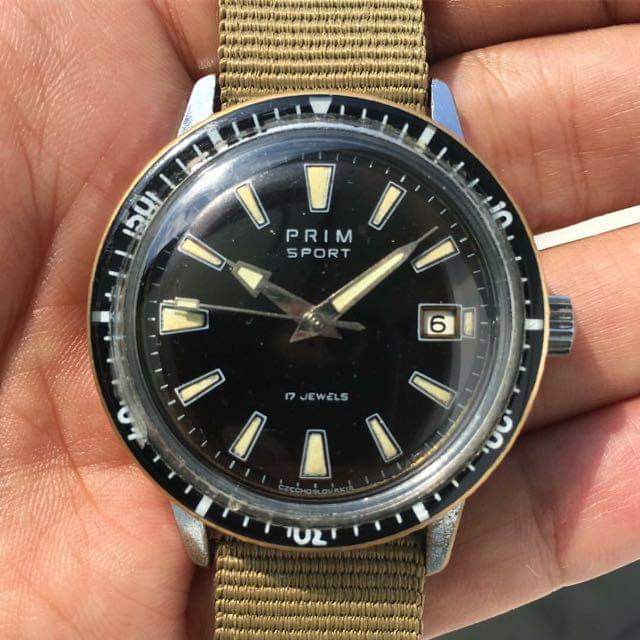 The beginning of the industrial production of watches in Czechoslovakia is 1946, when the state-owned company Chronotechna in Liberec was founded. In 1948, a plant was opened with a seat in Šternberk, and then a subsidiary of Chronotechna, the Elton factory in Nové Město nad Metují. The first wrist watches were made in the 1950s on the basis of French movement Lip cal. R25. In 1956 the Prim brand was registered and serial production started a year later . In a short time it was possible to reach a number of around half a million watches made annually. Prim also offered alarm clocks and wall clocks. Soon, the production of own mechanisms with manual drive was developed and implemented. After changes in the system and privatization, the watches under the Prim brand are still produced in the Czech Republic by two independent entities, namely the Elton factory with headquarters in Nowe Miasto nad Metují and the MPM-Quality company . 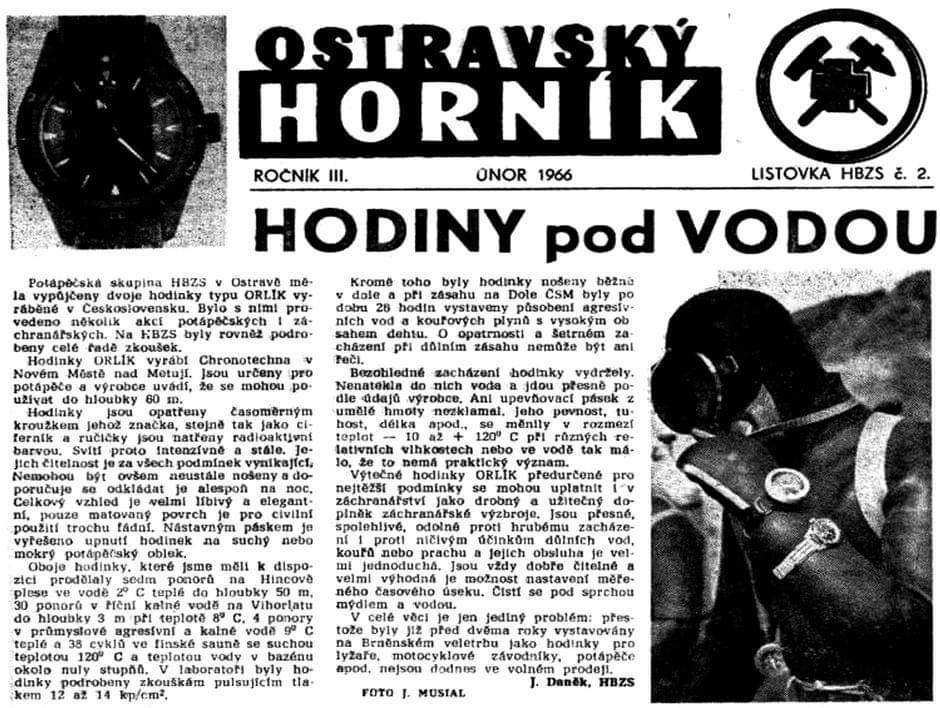 The first dive watch manufactured in Czechoslovakia was Prim Orlik with a manual movement cal. 50. The watch was commissioned by the Czechoslovak Ministry of National Defense, for the needs of military special units. The order was for 300 pieces . It also defined the criteria for this type of equipment, i.e:

- the movement had to be resistant to shocks and impacts

- the structure should be waterproof to at least 5 Atm

- tips, indexes and markings on the rotating ring were to be readable in all conditions (radium paint was used)

- the watch could not made reflections

The Orlik was ready in 1965. The casa with rotating bezel, crown and back was made of special sandblasted stainless steel called Phonix MAZ. Each copy had a numbered screw back, where the first two numbers marked the year of production, and three serial numbers of the watch. The watch uses 2.7 mm acrylic glass and rubber gasket. The rubber gasket protects also back against water. The movement was embedded in the case with a silicone ring, which increased the impact resistance. 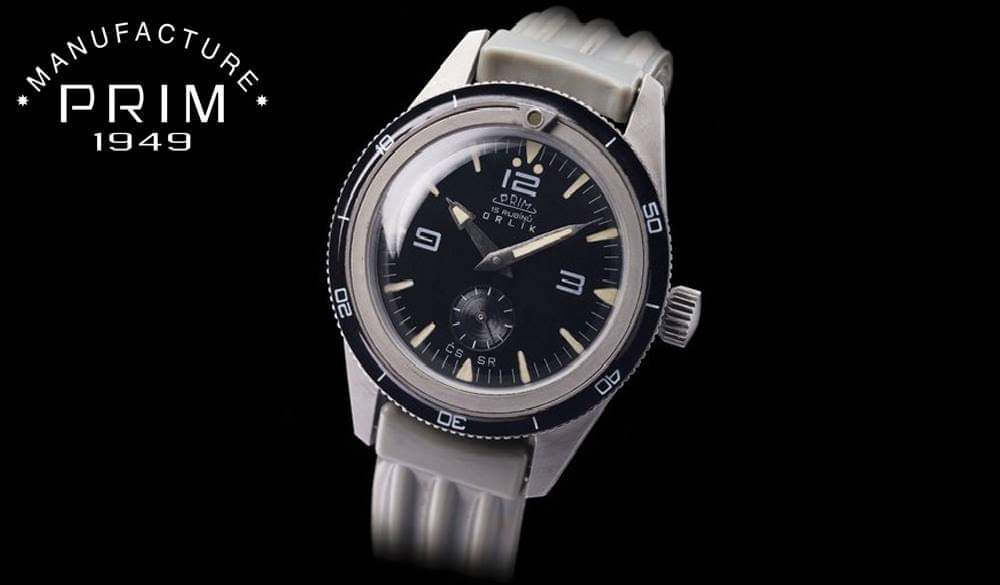 The Orlik's WR was determined at 60 meters. The watch has a silicone strap with an additional extension element that allows it to be placed directly on the diver's suit.

At first glance, this design is very similar to Omege Seamaster 300 Ref. and you can see that his constructors used the work of the Swiss. However, the mechanism with the lower second and Prima's characteristic hands mean that Orlik has its own unique character. Already in the 21st century, a re-edition of this model was created at the factory in Nowe Miasto nad Metuj. Original watches from the 1960s, however, enjoy growing interest not only among Czech collectors.

At the turn of 1968 and 1969, Elton Sport, number 68, was produced, which also found equipment for the Czechoslovak army. In relation to the civil version, i.e. Prim Sport I watches, it had increased water resistance (from 4 to 6 Atm) and metal, instead of acrylic, a ring insert.

Much more popular was the civilian version of the same watch, the above-mentioned Prim Sport I. This classically designed diving watch in a round case with a diameter of 36 mm was produced for 24 years until 1993. It was created to a dozen or so different versions, differing the color of the dial and the color of the insert.

In 2007, both watches have their "refreshed" successors in larger steel cases, but still equipped with a manual cal. 68. 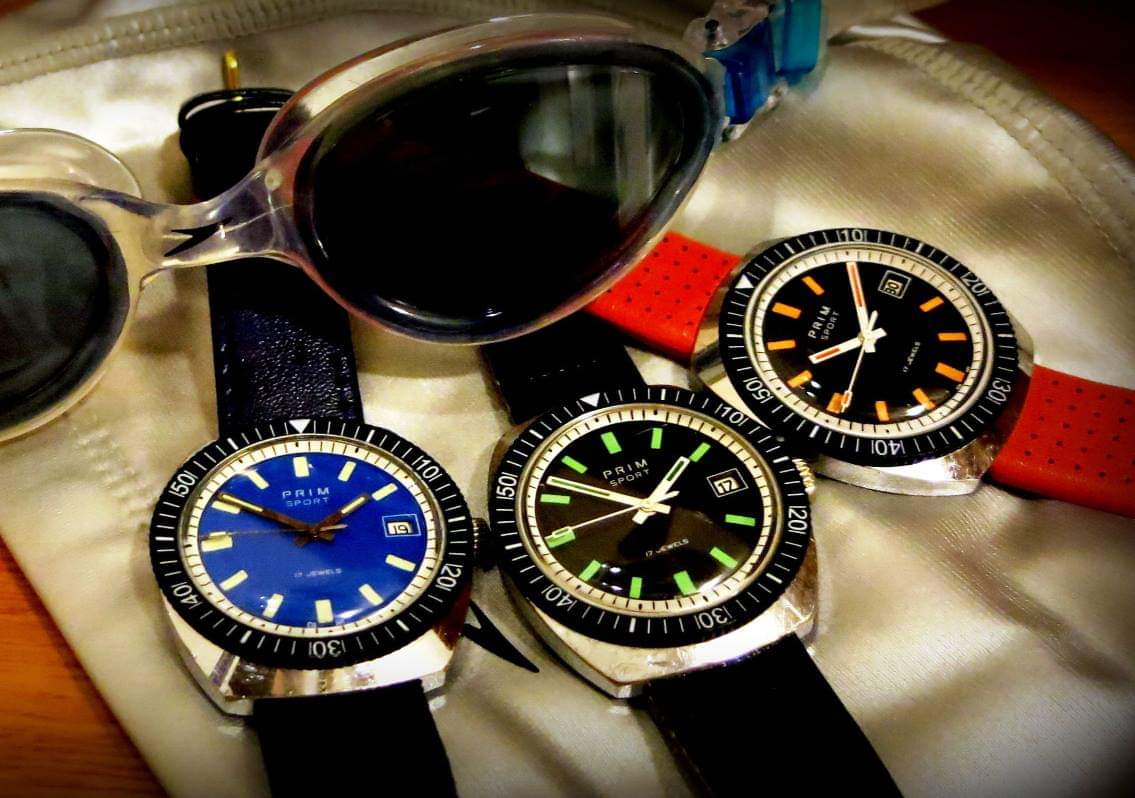 Also in 1969, the production of the Sport II line, cal. 68, was implemented over Metuje in a more elliptical case. In addition to the form of cases, the watches in this series distinguishes the shape of hands and indexes. The waterproof was determined at 40 meters, has not changed. These watches have been recorded in the history of Polish military. In 1976, the Czechoslovak Primów Sport party went on to equip the Polish Navy.

Around 1978, in the Sport II line, a movement with an automatic caliber 96 was also installed. In the late 1980s and early 1990s, the dive watches produced under the name Prim were significantly diversified, both in terms of the models offered and the mechanisms used. In the 1980s, for the first time, the quartz movement caliber 200/210 was used. A decade later, manual caliber 64, Japanese Miyota, and even Chinese manufacturing move. were in use. 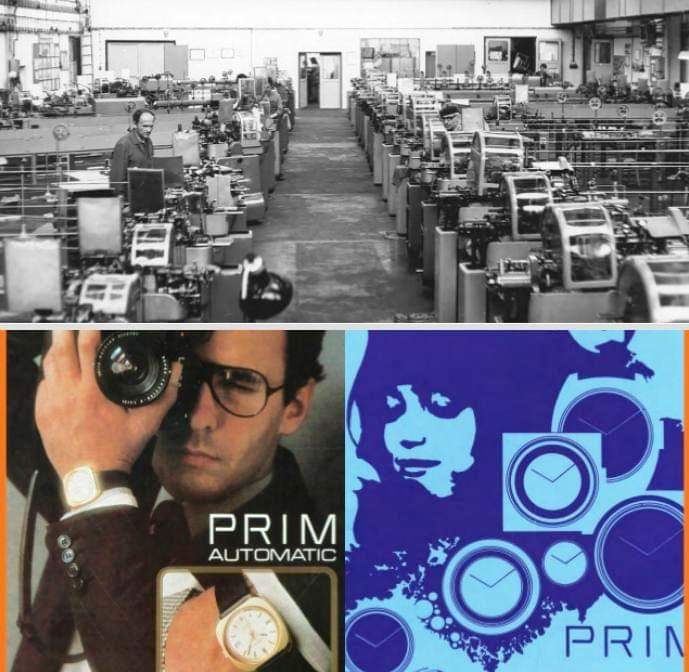 In the new century, the producer from Nowe Miasto nad Metuj constantly rebuilds his reputation and is eager to find inspiration in his own rich history. 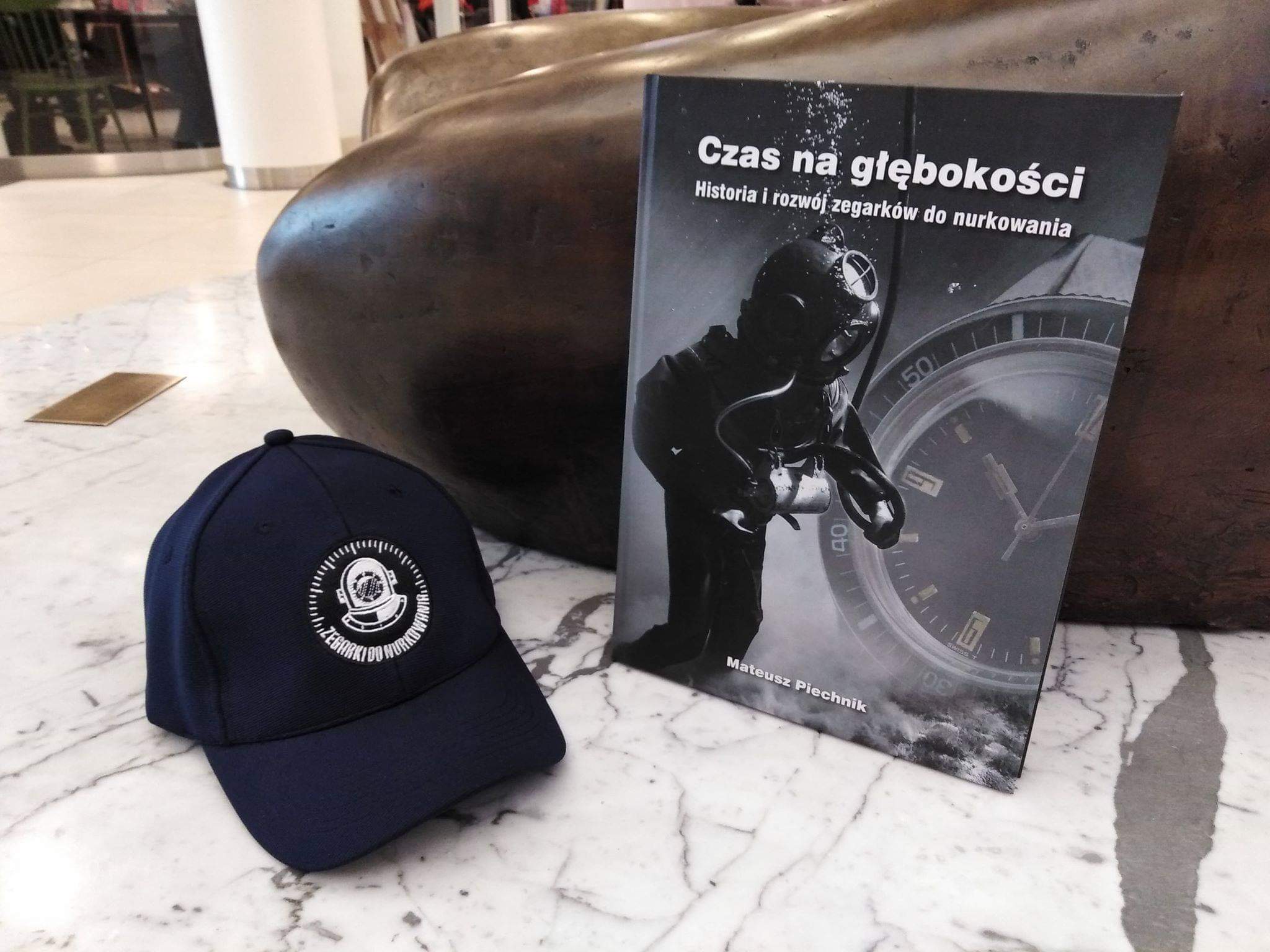