Bulova's Secret History With The CIA

Bulova's Secret History With The CIA

By now, everyone is probably at least somewhat familiar with the SR-71. It seems to grace the pages of HODINKEE with regularity. And it's easy to see why: It's one of the most impressive bits of technology humankind has ever created. It's an absolute marvel. Lesser known is its predecessor, the A-12, which was based on a design brief meant to address the shortcomings of the U-2 spy plane. What you might not know about, however, is that pilots of both those planes, and the experimental X-15, all wore Bulova Astronaut watches.

The Accutron is both a watch and a technology, and when the first Accutron tuning fork watches were first released to the public in 1960 they were seen as nothing short of revolutionary. Quartz watches were still a decade away, and while the Accutron wasn't the first electric watch – that honor goes to the Hamilton Electric 500, which debuted in 1957 to much fanfare – it was the first to achieve widespread success. Unfortunately for Hamilton their watch was rushed into production and exhibited significant initial teething problems, and when the Accutron came along, the Hamilton Electric 500 was doomed.


The tuning fork mechanism of the Accutron gave it unprecedented accuracy and was seen, as well, as marvelous technology, and with unquestioned superiority on its side, Accutron timekeepers and watches found wide acceptance not only from consumers, but also in the worlds of astronautics and aeronautics – including in the cockpit of the fastest plane ever made. It's a story maybe better known within the Accutron enthusiast collector community than in general – perhaps aptly, for a tale so rooted in Cold War-era cloak-and-dagger secrecy. But when an aircraft called the A-12 first flew as part of a CIA "black aircraft" project, it was the most advanced in the world, and for its pilots, the CIA selected what was then the world's most advanced watch.

Bulova's Accutron Astronaut The Watch Chosen By The CIA.pdf
You do not have the required permissions to view the files attached to this post.

Re: Bulova's Secret History With The CIA

I have found the old CIA records regarding their pilot crew and their personal safety kit, which includes the serial numbers of each watch issued.
Here is a clip of just one page, with Accutron serial numbers hidden, as I am still searching for one! :D 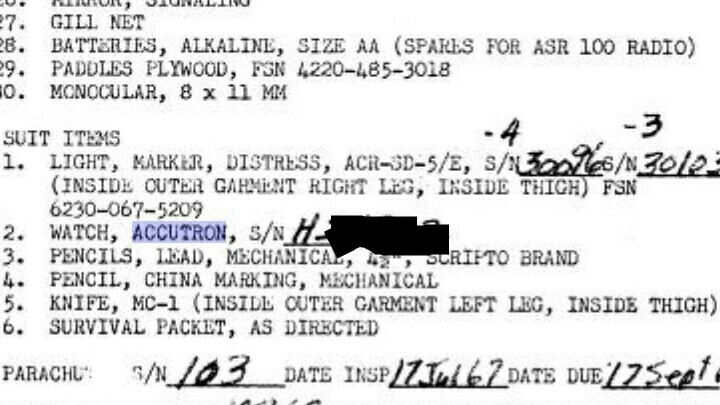 Re: Bulova's Secret History With The CIA

Fuck the Donkeys.
You cannot explain away a wantonly immoral act, because you think that it is connected to some higher purpose.
Captain Jean-Luc Picard, Star Trek: The Next Generation
Post Reply
3 posts • Page 1 of 1