Of cats and parakeets

Related to your pets. Does not include girlfriends/boy friends
Post Reply
8 posts • Page 1 of 1

Of cats and parakeets

Yesterday, I had possibly the most peculiar situation ever since Mr. Furball has annexed the Bloke Cottage...

I keep a pair of parakeets. They happened to be what was my main concern when letting Mr. Furball stick around. Yeah, I had to lift him off their cage by the loose skin on the back of his neck, something like three times.

For two months, however, I didn't have to do that. Looks like he left the budgies alone.

Yesterday, I had a long moment of genuine fear. The side of the plastic base gave up by the edges, and the whole metal top of the cage toppled. One parakeet stayed inside, but the other...flew out through the open veranda door into the garden.

Now, when a budgy escapes, it's unlikely to return. It also won't survive in the wild - assuming that a bird of prey won't kill it, sparrows will, as sparrows are vicious motherfuckers. My great-grandfather rescued a runaway parakeet from sparrows alright. He had it cured by a local vet, and kept it.

Anyway, I chased the budgy into the hedge, armed with a kitchen towel to throw over the bird, once it'd sit on a patch of open ground. The hedge includes blackberries, which means that the thorns prevented me from catching the fucking thing.
Ultimately though, the budgy flew out, flying low over the lawn, and into a patch of it overgrown by ivy.

And then, the unexpected happened. A tabby projectile flew off of the veranda, right into the ivy. The next thing I saw was Mr. Furball, grabbing the budgy with his front paws, and right into the ivy, and pressing it to the ground.
"KUUUUURWAAAAA! SHOOO! WYPIERDALAJ!," I shouted at Mr. Furball, quite worried that he might be tempted to develop a taste for raw budgy. And he does hunt, as recently I saw him playing around with a mouse. Later on, he dragged said mouse into the hedge. He reappeared after a while, only to vomit copiously onto the brick paving by the veranda, with bits of bone and lumps of grey fur.

The bird was still in shock, in the ivy, so I quickly threw the towel over it, and we've got it back into the cage.

Fuck. I thought I was about to lose the budgy the moment it escaped. And it would have escaped, if not for Mr. Furball's intervention.

While the predatory nature typical of even the couch-dwelling felis catus made me question the nobility of Mr. Furball's intentions, as compensation for the obscenities and a reward for his assistance, Mr. Furball has been rewarded with a nice, juicy bite of raw beef. 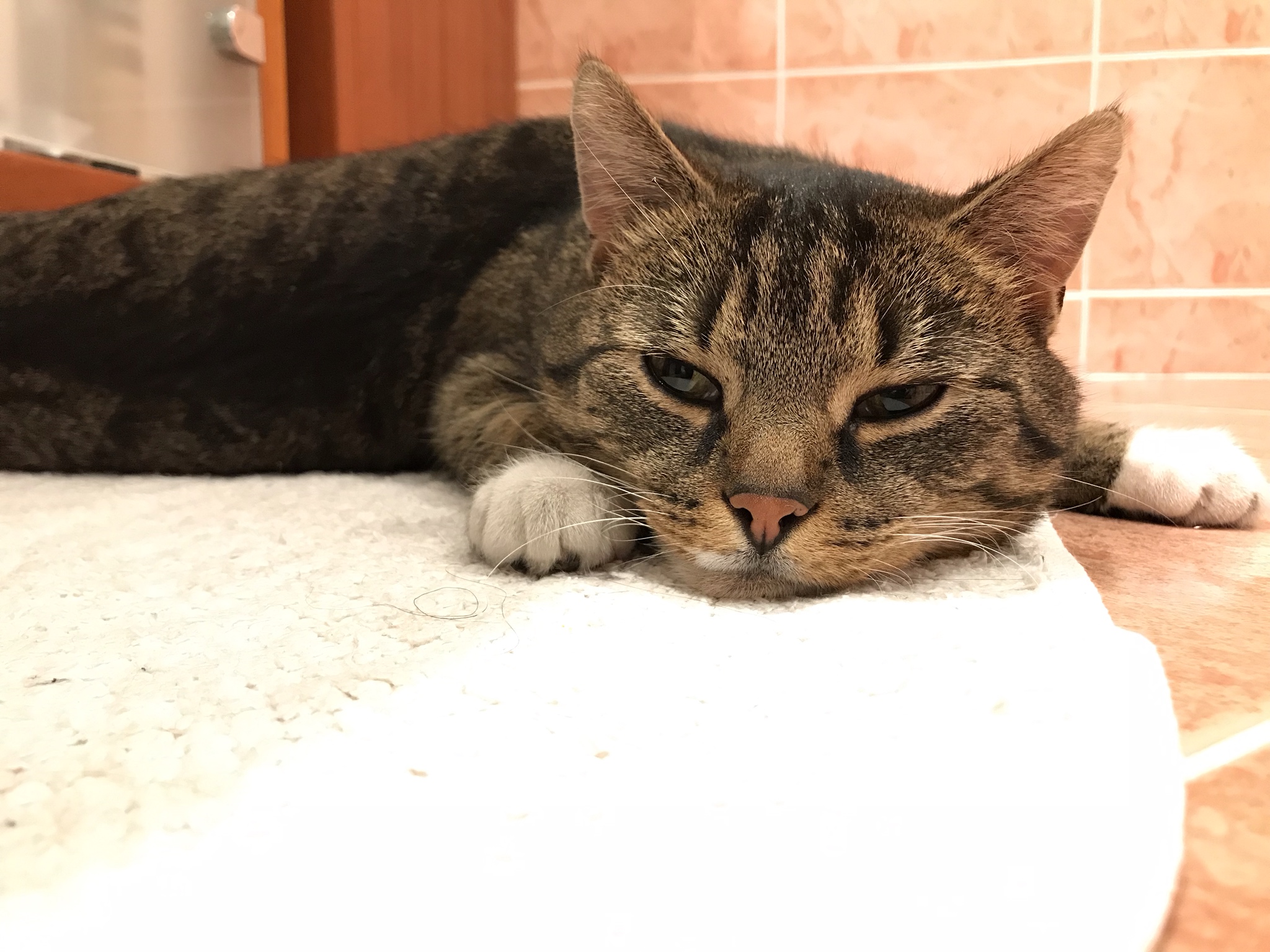 Fuck. That worked out better than the title suggested.

Good job, Furball. Damn but that really is one handsome feline.
My best friend from college shared his secret to his huge financial success, "I fell out of the right vagina."

All of nature exists to amuse and satisfy cats. Yours look particularly pleased with himself - as he should be.

Has the victim recovered?
"Who are you?" "I am the new Number Two." "Who is Number One?" "You are Number Six."

I had a pair of larks for a year. I figured hanging the cage from the ceiling in the kitchen near the patio door would keep them safe but noooooo. Cat would get on the table, something he never did, and watch them. Then the leap to the top of the cage and using it for a playground swing then the scruff of the neck thing. The birds singing and taunting him didnt help. He gave up (I think) after a while but I passed the birds on to a friend. With the cat, the birds and the aquarium my house was getting like Wild Kingdom.
NRPI here.

Indeed, Mr. Furball did a good job. As I wrote earlier, it is more than possible that his help wasn't meant to be help at all, but no less, if not for him, I'd have lost a budgy.

Anyway, the budgy was understandably shocked afterwards, but wasn't injured. So, it's all good.
I always hope for the best. Experience, unfortunately, has taught me to expect the worst.
Elim Garak, Star Trek: Deep Space Nine

No good deed ever goes unpunished.
Rule of Acquisition no.285
Post Reply
8 posts • Page 1 of 1