Related to your pets. Does not include girlfriends/boy friends
Post Reply
18 posts • Page 1 of 1

Rather than talk about a deceased pet, I'd like to celebrate one that is still with me, my baby "Tweetie" (that was his name at the shelter when I adopted him; I don't change the names of the cats I adopt).

Tweetie was a 6-year-old scrawny mess when I saw him at the Humane Society in 2009. Flea infested, parasites, ear infection, hair falling out. Whaddamess. But he reached out through the cage and meowed at me, started purring and drooling on me (he's what's termed an "emotional drooler" in that any time he's very happy or content, he just starts drooling all over the place... note: drooling can also be indicative of dental issues, but that was ruled out) and that was that.

Once he came home and got healthy, his patchy fur turned into a gold down, very soft to the touch. He sleeps under the covers every night, snuggled up against me until he falls asleep. He's absolutely exuberant when I come home from work (if you've ever seen an overly excited puppy, that's him, hence "puppycat").

He's now 12 years old, with me 6 years, and deity willing I hope he's with me another 10 years. Indoor cats can live into their late teens or early 20s. He's still spry. I've had a lot of cats in my lifetime, but he's been more "human" than any I've encountered. I dread the eventual day that he crosses the Rainbow Bridge... I'll be a complete basket case.

Until then though, lots of purring and snuggles. Proud "hater" since 2009. Get over it and have fun reassembling yer wartches.

I'm on board with the concept of living pets. Not mine but recently rescued from the middle of Bangkok traffic by a compassionate Thai lady of my acquaintance who has been nice enough to share pics of the wee beast. And she is a very wee beast indeed. That is one diminutive li'l beastie. Cute.
Proud "hater" since 2009. Get over it and have fun reassembling yer wartches.

Her name is แมว which if Google translate is working isn't a very imaginative name. Even funnier is the Thai pronunciation of the word which sounds like "meow" to me.

She's still a little traumatized from the Bangkok traffic she was rescued from (I can relate) and it's impacting her appetite - might be small for longer than usual.

Way cool cats and thanks for sharing.

Puppycat looks so soft and furry!
My best friend from college shared his secret to his huge financial success, "I fell out of the right vagina."

What a great cat!! That's how our Sophie was, rescued in 1995 from a dumpster where mom had abandoned the runt of her litter. Just a love. Trained to sit on command, up, down, and would ride my shoulder all over the house, occasionally jumping onto my shoulder without me being aware that was the plan. But like your puppycat just wanted to be close.

I only have this one picture of her... She is next to Belle, who is still with us. So, I'll split the difference and show this picture with both. Sophie passed last year at 19 but it seemed like a pretty damn good ride for her - and especially us.

We miss Sophie, but sure love having Belle in our lives - she is a hoot! A clever shit who communicates amazingly well, and has a fun playful personality... Even as we're easing into twelve years together... Awe shit, I hope this doesn't come off as high-jacking the thread! At one point we had 3 cats and 3 dogs, all adopted... I just dig pretty much all animals, and your cat seems awesome. Knowing that that is a wildcard in cat personalities, I full appreciate what a cool relationship you have there!
Oversteer scares passengers, understeer scares drivers...

Puppycat is a fine looking feline critter, dorks, no error.

I hope , someday , to be as content as Puppycat.

don't you love it when they cling to ya,mine do that all the time hankie is here making it hard to type....

You guys are such a bunch of softies.

Which is utterly stellar.
The Best Invicta Ever is: The ones you used to own. - Boscoe

Awesome thread dorks. Beautiful baby. Our cat mittens does not let you pick her up. She gets mad and I thin its funny. But she has to be right next to you, or right on top of you every minute of the day that I am home. Makes me smile.Glad to know that all us haters have so much love for our none humane friends.

Amazing when you get a cat like that and not the run and hide variety. Ive been lucky enough to have 3, one a Siamese, one all black and one an orange tabby. Seems to me most orange cats have a great, laid back personality, never ran into one I didnt like.
NRPI here.

MAXg wrote:Seems to me most orange cats have a great, laid back personality, never ran into one I didnt like.

I would differentiate between vivid orange and what's known as "cream", which is what Tweetie is. Solid cream and cream tabbies have, in my experience, very laid-back and affectionate personalities. Orange, on the other hand, can be hit or miss. I've encountered some, including two that I tried adopting, that had very hyper or aggressive/dominant personalities.

I do find that in a multi-cat household, as is true with humans, there is far less drama with multiple males than with multiple females.

Proud "hater" since 2009. Get over it and have fun reassembling yer wartches. 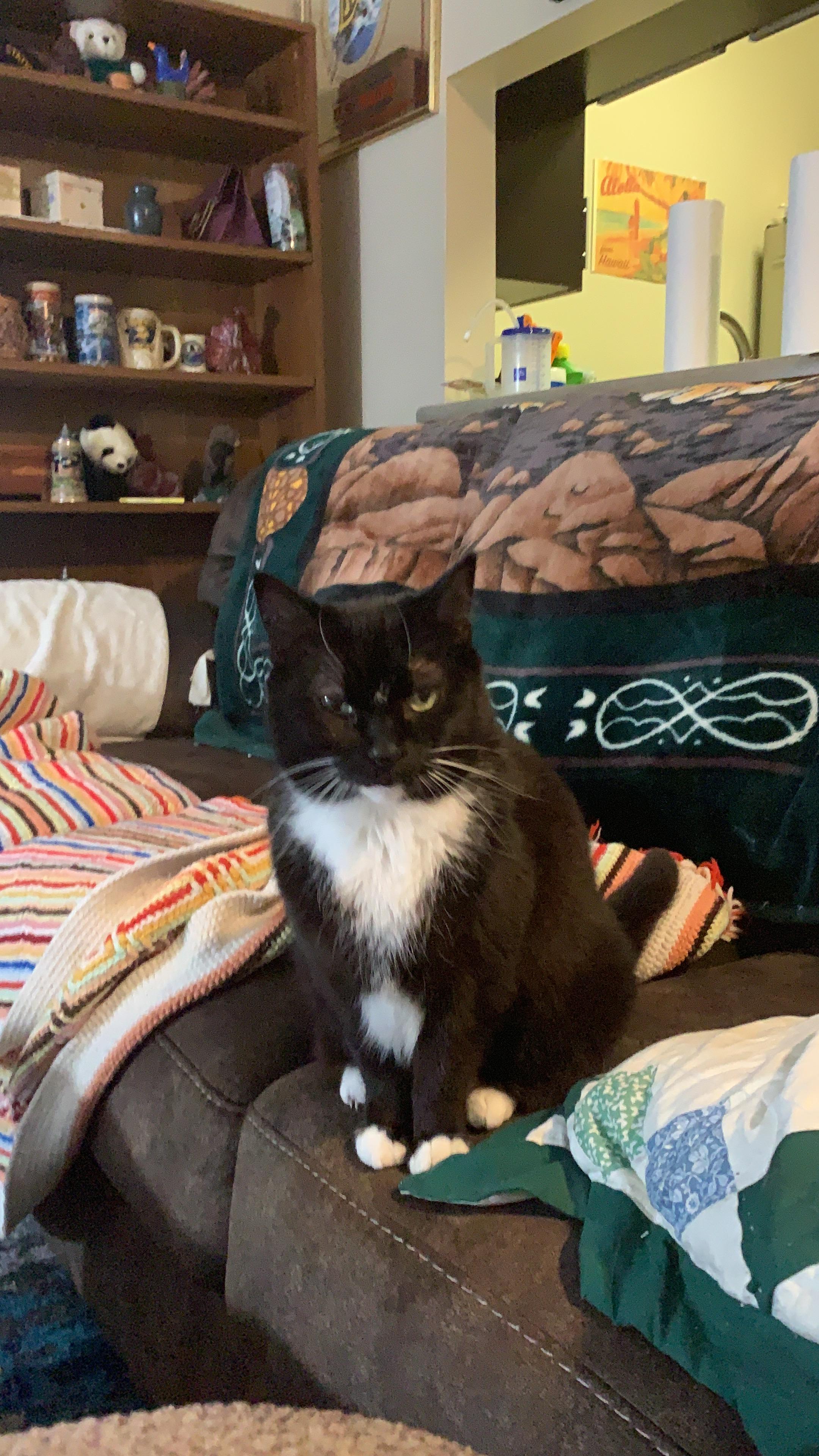 This was taken in the summer of 1987 on shellback day, this is on the equator in the Indian Ocean,I am the one with shirt unbuttoned in the middle
Post Reply
18 posts • Page 1 of 1