Now, here's a booze that's not exactly known far and wide. The Dutch call it jenever. Basically, jenever is a juniper-based booze, much like gin. It isn't a derivative of gin, though - it's the origin of gin. Yep, gin was created only after jenever made its way to Britain, and the Brits thought, "wait, we also can make juniper booze of our own."

A Dutch friend of mine tried to talk me into trying jenever. To no avail. I still have bad memories of gin - the sort of memories that involve the debilitating headache forcing one to question the nature of life and existence, while parched as fuck and about to vomit.
So, imagine my surprise, when today I was woken up by a call from a UPS delivery guy, and picked up a parcel from my friend, containing...a bottle of jenever. 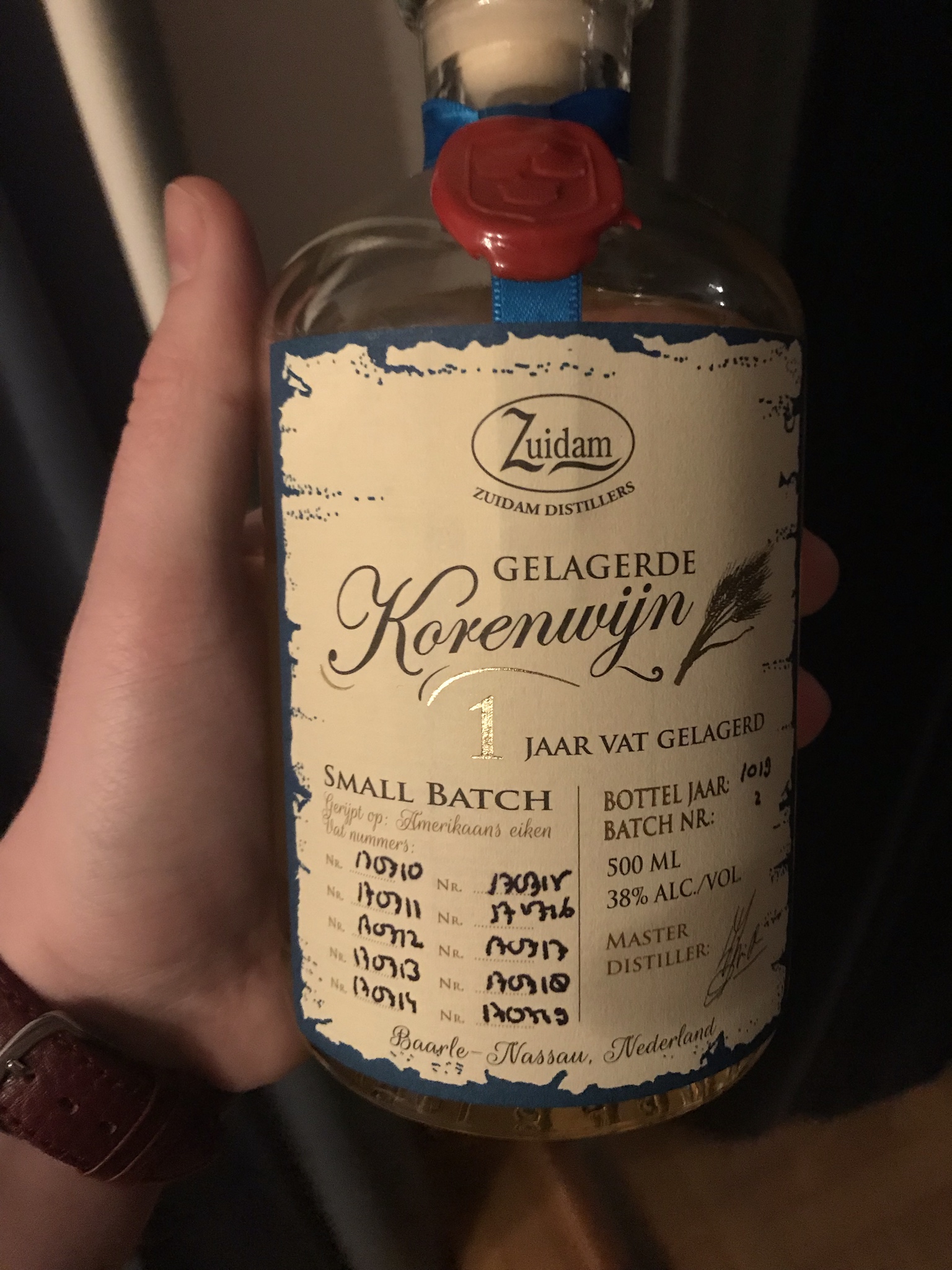 Well, it isn't exactly jenever. It's korenwijn, a variety of jenever. In fact, it's supposedly a lot like the most abundant form of jenever some two-three centuries ago.

Frankly, I expected nothing more than something along the lines of a more tolerable gin. Oh, how fucking wrong I was...

This thing is great. Because korenwijn has to have at least 51% of malt wine content, it's a lot like whisky. The taste is really similar to a mellow Scotch, but at the same time, it's so very different. It has a lower voltage than the usual whisky - 38%, versus 45 to 50% in whisky and bourbon.
It is also far sweeter, and the juniper definitely can be felt over a woody and fruity background. Before having it on the rocks, I had one glass neat. Frankly, it works neat and on the rocks alike.

The best part? Korenwijn isn't expensive. Some of the best stuff out there - and from what I hear, the korenwijn by the Zuidam distillery, just what I've got, is among the best of korenwijn - is priced lower than the cheapest Chivas Regal.
And we're not talking of mass production - we're talking local produce, small-batch stuff. Yeah, the markings on the bottle that look written by hand...actually were.

So, if you're looking for something new to try among the whiskies and whisky-ish stuff, korenwijn's yer friend.

Mr. Bloke, out.
I always hope for the best. Experience, unfortunately, has taught me to expect the worst.
Elim Garak, Star Trek: Deep Space Nine

I'll never cheat on Jack Daniels,wooden shoes or not.

Sounds wonderful. Yeah, after my last gin induced vomitfest and three day hangover some 20 years ago, I won’t ever touch gin again.

This, I would try this.
My best friend from college shared his secret to his huge financial success, "I fell out of the right vagina."

Only 38% ??
Conj would use that stuff like a water chaser, don't ask me how I know (Flying Boot Cafe).

Joking.
Anything that speeds up killing my liver is ok in my book.
.

I likes my gin.
Choice is Tanqueray No. 10, 47.3% abv.
Tonic, ice, lime peel/slice, or for a change grapefruit, and a dash of lime cordial.
All the children must be wondering; "Are we next?"
Ban guns.

I currently have 5 different gins in stock, including Nolet's from Holland. No jenever here; they spell it Genever in my parts. While I do enjoy a good gin and tonic and the dry Martini; I very much enjoy sipping gin straight.

I'll be on the lookout for more of that Dutch gin. Jenever. Reminds me of that old Donovan song:

I live less than an hour from the Jack Daniels distillery and ride my bicycle up in that area all the time. They have these huge warehouses full of barrels of JD, at barrel strength, of course. When I toured the facility, you could not even sample their wares, the facility is in a dry county. They've modernized a bit since then and while Tennessee used to be home to just two distilleries, JD and George Dickel, there are now well over 40 in the state.

I did come across the terms "Genever" or Geneva gin being applied to jenever. The jenever is a Dutch thing, though, hell knows where Geneva comes into that, and where from, but as for "where from" I'd bet on confusion and spelling errors.

Regarding Jack Daniel's - I really like Old No. 7 and Gentleman Jack (a more mellow Old No. 7 put through additional charcoal filtering). While Wild Turkey remains my favourite American booze, I'd never refuse a glass of Jack, and if I'd see it at a reasonable discount, I'd jump on that deal in a heartbeat, just like I recently did on the Famous Grouse Bourbon Cask.
I always hope for the best. Experience, unfortunately, has taught me to expect the worst.
Elim Garak, Star Trek: Deep Space Nine

When I was a young, there was a kid who lived on our block a few houses down named Jack, and his surname was Daniels. This was unfortunate for him, because his family were teetotalers, and never touched a drop of the demon jake. Remember, this was in the era when everyone drank like sailors on shore leave--there was a scene on the old show Mad Men where Don Draper's kids were preparing drinks for the adults at a cocktail party, and that wasn't far from the truth.

Anyway, young Jack Daniels had namesake to live up to, and he did it in spades. At the tender age of eleven, he got in the bag for the first time, much to the horror of his parents. By the time he was fifteen, he was half a drunk; by twenty he could have drunk Turd head under the table. Normally, with my Young Conjurer stories, the poor underling ends up as chairman of JP Morgan Chase, but not for Jack Daniels. A few days after he celebrated his twenty-third birthday, he got super-jaked, visited the Ogden News, a notorious porn store, got picked up by a gay serial killer, and ended up face down in the Des Plaines river with his trousers yanked down around his ankles.

Give this one a try for a unique experience.

https://www.thrillist.com/drink/chicago ... st-chicago
My best friend from college shared his secret to his huge financial success, "I fell out of the right vagina."

Think of it as bitter old mop water, sour smell, with a moldy funk. Really is horrific.
My best friend from college shared his secret to his huge financial success, "I fell out of the right vagina."

Return to “The Pub”