What bothers me about this Zenith brand is how they stole the design of the Invicta Subaqua Noma and claimed it as their own design made by the CEO of the company. 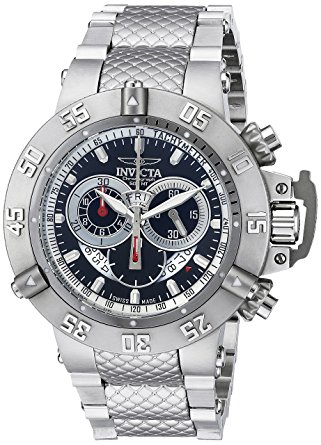 Fusion is defined as a cellular process in which single nucleus cells combine to form a multi-cellular entity. It is the basis on which living creatures grow larger, stronger and more powerful. For more than four decades, Jean-Claude Biver has proven himself the master of nuclear fusion – he is an unrivalled Jedi in the art of uniting watch brands with the ever-expanding, diverse, specialised universes that collectively make up the tapestry of contemporary culture.

You could say that Hublot is Biver’s masterpiece of fusion. With Hublot, he transformed first what a watch looked like, making it a shimmering symbol of modernity, then proceeded to radically redefine the worlds a watch brand could attach itself to at a cellular level. Like football, where Hublot was the official timekeeper of the World Cup. Like music, where Hublot was the first watch brand to create a watch in collaboration with Depeche Mode. Hublot was everywhere, even appearing on Floyd “Money” Mayweather’s trunks when he fought Manny Pacquiao.

To quote Walt Whitman, Hublot is “large, it contains multitudes”. It passes through innumerable worlds, through the blood-brain barrier, it smashes through the walls of impulse control and is made manifest on wrists of uncountable individuals around the world. Music, sports, auto racing, graffiti, tattoo culture… The seemingly endless universes were each colonised by Biver. He planted a field of Hublot flags so vast that – to co-opt a phrase once used to describe the British Empire – today he can irrefutably claim, “the sun never sets on the world of Hublot”.

Lovely movement, ghastly watch. The case looks like it's made out of pigeon droppings. And...ahhh, the Hublotesque design, which is verily the knitted tank-top or the garden gnome of luxury watches.
I always hope for the best. Experience, unfortunately, has taught me to expect the worst.
Elim Garak, Star Trek: Deep Space Nine

I think the lead has been really buried on this one. Yeah, the watches pictured above are butt ugly. Good heavens.

But seriously - I honest to God believe the movement in this watch is gonna become a really big deal, and I already know that collectors around here are jumping around like frogs on a hot skillet. But the most exciting thing to me about the movement is that silicone oscillator; that thing is gonna get emulated like two-handed bowlers and whatever Taylor Swift wears on her next album cover. The oscillator eliminates more than 30 moving parts from the typical automatic movement and cuts down on a lot of friction, adding life to the movement. And it will be accurate between three and five a day. Oh, and an 80-hour power reserve to boot. Yeah, he's creepy and he's kooky, but Biver has done it again.

Coolest new movement I've seen since the Seiko Spring Drive. I'd never wear that watch, but I'll be damned if I don't wanna get my hands on a movement like that someday. Seriously, the most exciting thing I've seen in ages. Cripes, go to YouTube; there's a mess of videos showing how this thing runs. You're gonna call me a cornball or a geek, but I love watches and this whole concept is fucking stunning - the movement, not these watches. And this is the way that the watch industry is gonna be able to compete with smart watches and iPhones and Alexa and whatever - cool new stuff.

As bad as I hate to admit it, the Defy Black Rose Gold makes my pecker stand up and shout.

And that movement sounds revolutionary.

Oh, but, Biver is one creepy looking dude and screw HugeBlow in the ear.

Otherwise, some cool assed innovation going on at Zenith.
My best friend from college shared his secret to his huge financial success, "I fell out of the right vagina."

I thought Zenith was past this Nvicter looking shit. What the fuck happened??

It's nice to see the Swiss firing back at the spring drive. They always had the "not fully mechanical" argument to deploy on the spring drive which had merit but was ultimately unsatisfying. Much better to meet it on home turf.

Now they need to get it to 6,000.00 and ready availability. And shedding that Eyal Whoblows design aesthetic wouldn't hurt either.

conjurer wrote:I thought Zenith was past this Nvicter looking shit. What the fuck happened??

Hard to believe that a guy who could oversee the development of such cool new technology in that movement could then case it up in such repulsive looking designs.

Agree with you T- the coolest thing to come along since Spring Drive.
^^^Copyright

conjurer wrote:I thought Zenith was past this Nvicter looking shit. What the fuck happened??

What happened? Jean Flawed Beaver is what fucking happened. And now he's got the Zenith designers sucking Whoblows' flaccid bellend.
I always hope for the best. Experience, unfortunately, has taught me to expect the worst.
Elim Garak, Star Trek: Deep Space Nine

No good deed ever goes unpunished.
Rule of Acquisition no.285
Post Reply
8 posts • Page 1 of 1