FB_IMG_1648212754523.jpg
You do not have the required permissions to view the files attached to this post.
"Old age and treachery will always beat youth and exuberance"

Found out there’s more to this seamaster I mean swatchmaster.
To disarm the people is the best and most effective way to enslave them. George Mason

Thank you, Mr. Guy. I just posted this (with a couple of minor edits) over at Watchcrunch. We'll see if it gets me banned.

Reddit, r/watchescirclejerk in particular, is having quite a bit of fun with this. 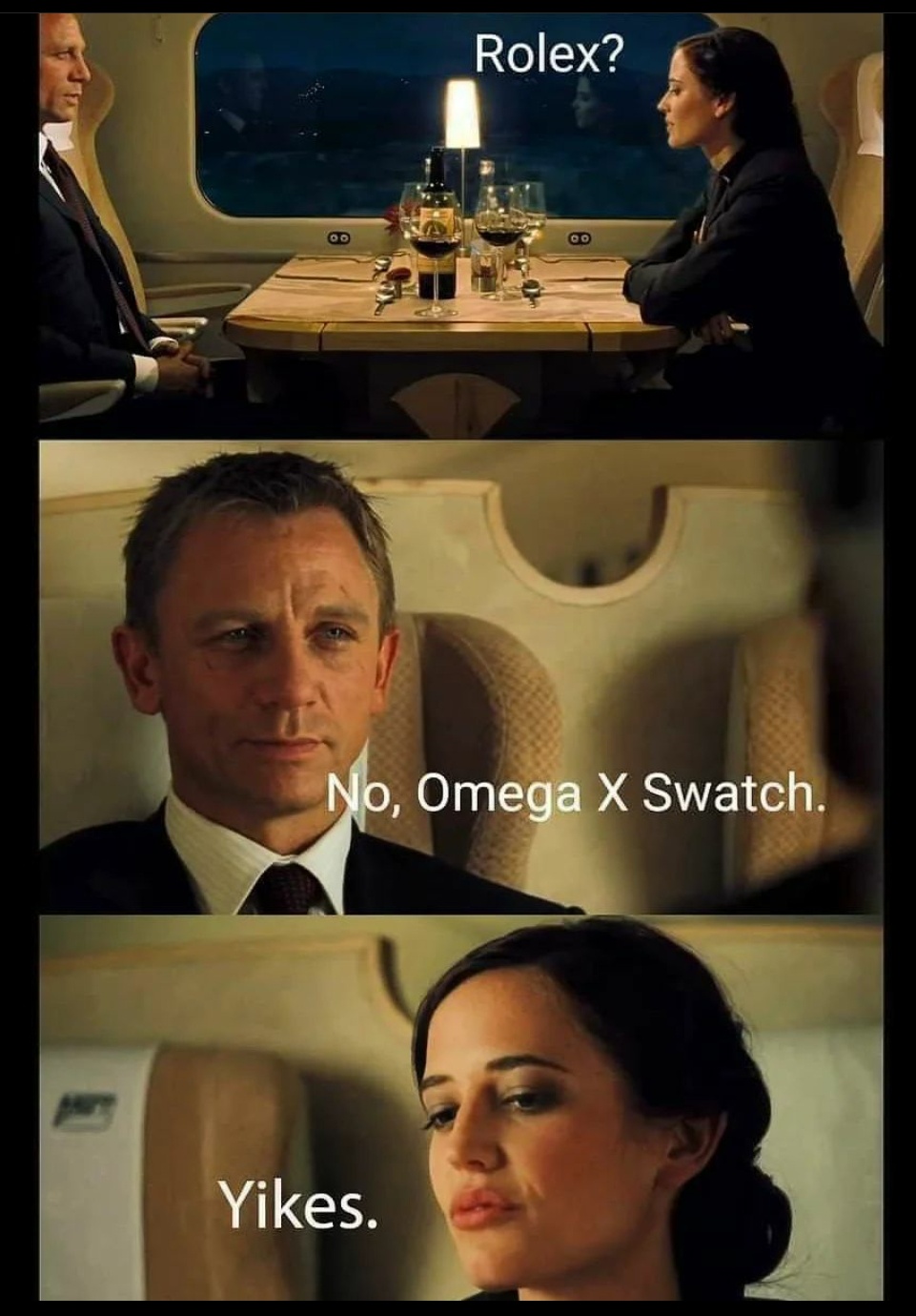 And it's sold now. 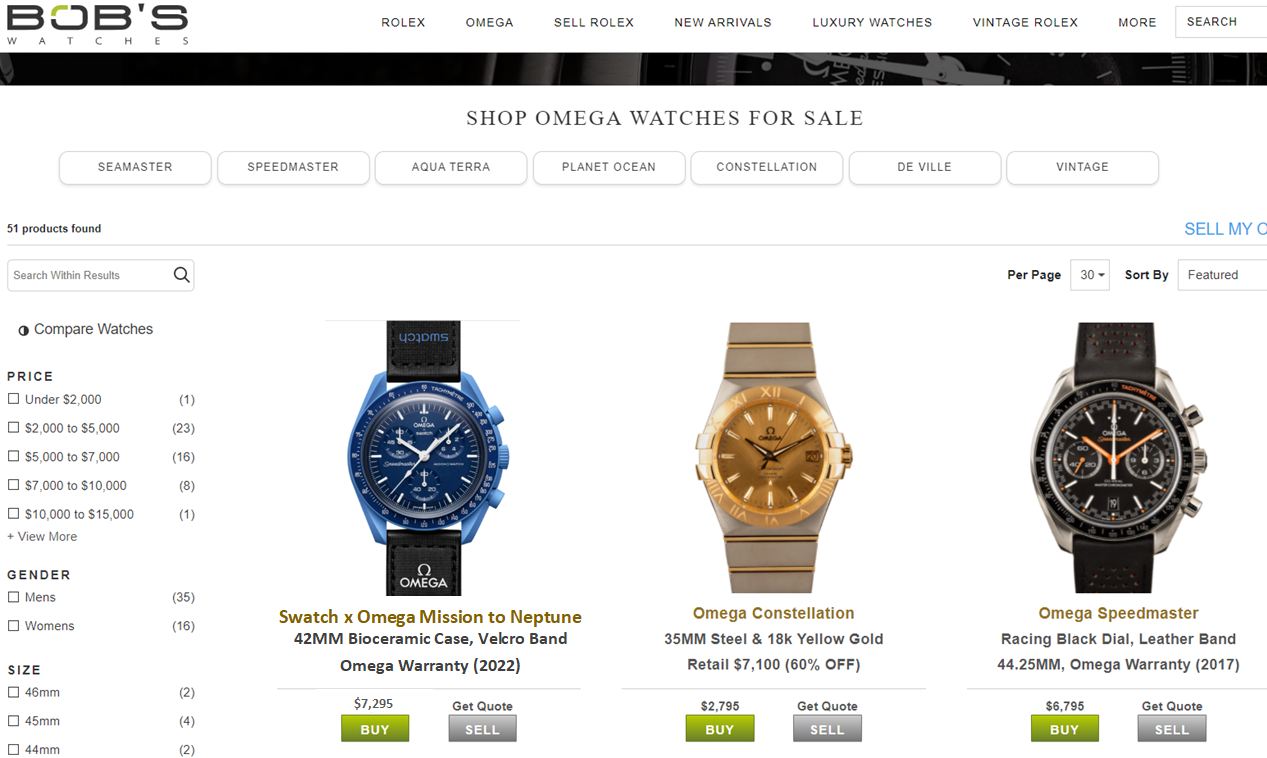 Cray. The Constellation, albeit 35mm, is a better value by a country mile.

conjurer wrote: ↑
March 24th 2022, 4:23pm
Picture this--a fellow is heading towards the checkout stand at the supermarket. His name is, I dunno--Galvin! Yes, that's it, he's Galvin. He's an architect, wears very thin eyeglasses with the frames made in Germany, drives a Polestar, has a wife who regularly does aerobics and blows him often. Galvin is also wearing an Omega Speedy moon watch on his wrist. Galvin is proud of his watch, since he bought it (full price! None of that gray market Jomashop shit for Galvin!) with the fee he was paid for his first big design for Section 8 housing for the poor and indigent. Galvin believes that even the least of us (read, broke white trash) deserve a home in a handsomely designed building.

And, as Galvin is checking out at the market, with plenty of kale and tofu, the guy bagging his groceries, named Jimmy, who has mild learning disabilities and lives, with his parents, at the very same Section 8 building that netted Galvin his Speedy, shows Galvin his gnu wartche.

"Look, Mr. Galvin! I got a Speedy too! And, it's better than yours, because I don't have to wind it, and it's accurate to 15 seconds a month!" Then Jimmy laughs so hard that his unibrow wrinkles and he partially wets himself.

So, when Galvin gets home, he throws his Man on the Moon watch in his sock drawer, calls his jeweler, and gets on the wait list for a Daytona.

A friend sent me a picture from Sydney, maybe the first store open to sell these?
It shows a line and says that there are 1500-2000 people in line 2 hours before the store opens.
Before you criticize a man, walk a mile in his shoes. That way you'll be a mile away and you'll have his shoes.

Yeah fuck that. People got nothing better to do on a Saturday than stand in a line outside a shop?
Copyright Reclinervision 2020 Productions. All rights reserved.

But if anybody could sell a sub $300 watch for north of 7 grand it's the fine pimps folks a Bob's.
^^^Copyright

That video just convinces me that I'm never gonna buy this.

I have a Fossil decker model which is their interpretation of the speedy that suits me just fine... And it's made out of stainless steel
"Old age and treachery will always beat youth and exuberance"

Swatch has announce on their Instagram that this is not a limited edition and more will be available in the future.
Before you criticize a man, walk a mile in his shoes. That way you'll be a mile away and you'll have his shoes.

The strap would have to go back in the box - other than that it looks like they did a nice job with these - seems to be compelling enough for the price of admission just to check out the BioCeramic case. I look forward to seeing how durable it is after the frenzy dies down.
^^^Copyright

I am on the fence now after seeing the video. Almost rather have a quartz PRX. After seeing them creating the chaos and feeding the scalpers, I’ve lost interest. They had small numbers available in the “select” stores, they created a frenzy just to see if they could. F em, maybe I’ll pick one up when they are half price.
In memory of TB/Phfluff, since he isn’t here to continue to give his praise, I will share it for him.

FB_IMG_1648342095949.jpg
You do not have the required permissions to view the files attached to this post.
"Old age and treachery will always beat youth and exuberance"

Its amazing that even as a Swatch they couldn't make the Speedie look interesting.
Meritocracy: the privilege, wealth and advancement of those who chose their parents wisely.
Capitalism: a cult that promised to do good for the worst reasons.
Nationalism: a profound longing to go back to a past that never existed.

According to Hayek Jr., SWATCH has licensed BioCeramic to a Swiss brand for an upcoming release, and said they are exploring moving the BioCeramic material up-line within SWATCH brands. Reportedly, SWATCH recently explored the material's use with the FiftyFathoms but abandoned the project. Certina, Tissot, or Hamilton, perhaps?
^^^Copyright 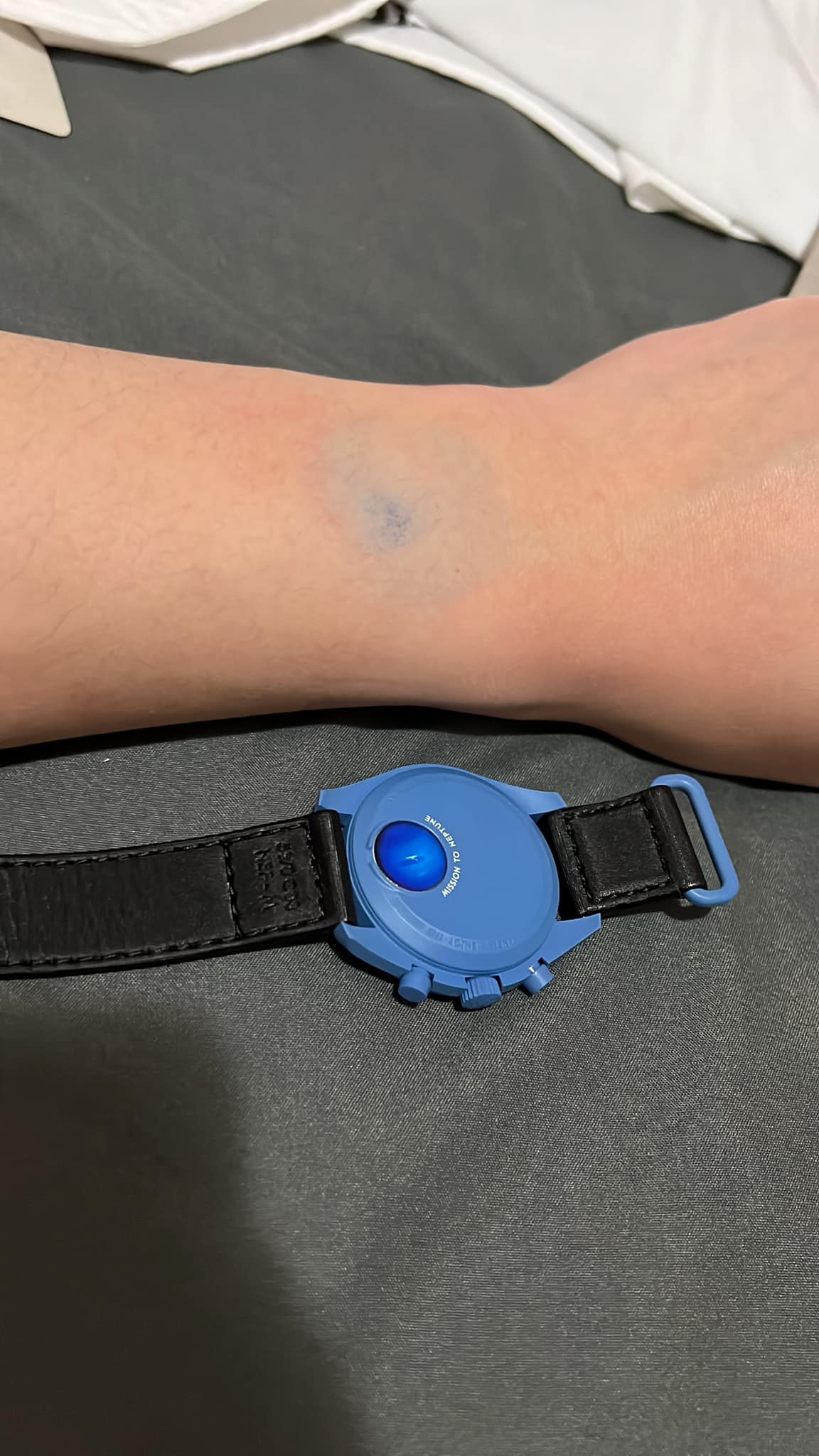 Crystal upon unboxing had scratches all over it. And the dye on the planet seems to leak into your skin. Honestly the watch feels super super super cheap. It is super cheap but not worth $260USD. A GA-2100 is way more worth it. But if you’re into the brand go for it. Overall not impressed.
Backstory of the colour leak: Went to a party, and temperatures were hot so moisture got to it.
Straps also feel like garbage. Would rather have rubber. The watch itself is so light…
You’re really just paying for branding. Do I expect a high end quality watch from this purchase? No. I expected the quality of a $260 quartz watch. This is not it.
Is this a luxury watch? No. It never will be but in this case they got you with branding and sold you a swatch disguised as an Omega for double the price of a regular swatch.
It’s a cool collab and but overall it’s underwhelming and not worth what the hype says it’s worth.
EDIT:
- People complaining about the blue dye being one the side and the watch being turned sideways. The planet print is the darkest spot on my arm above my vein. The dye will fall from the print and mix with moisture which covers the case back. I turned the watch sideways for the photo and wouldn’t spend the time to colour in my arm for a photo of a crappy watch. I’m just posting my own experience with it.
- People complaining about the engraving. Facebook photo uploads degrade the quality of photos. The lighting and the angle at which the photo was taken also makes it so you can’t see the side engravings. But below I also posted a photo of the back engraving in the comments. The engraving is super shallow.
Here’s a Reddit post from another buyer who had a similar experience:
https://www.reddit.com/.../moonswatch_has_this.../... 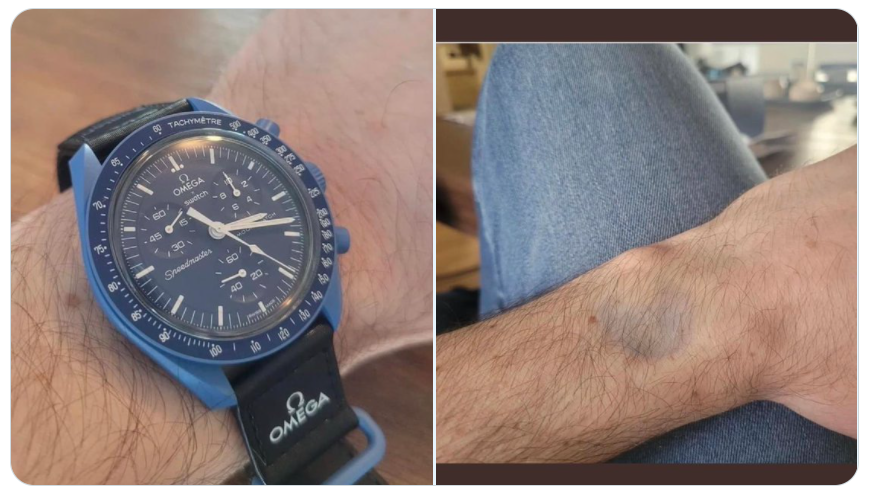