Watchmaking in America: A Brief History

Watchmaking in America: A Brief History

I am going to encourage everyone and anyone who has an interest in watchmaking, not just in America, to read this article and visit the site line. On the right hand side are numerous links to American watchmakers and their history.

The beginnings of the watchmaking industry in the United States were hampered by a lack of metallurgical skills and raw materials; watches could hardly be made out of wood, as were some of the earliest American clocks. Many early watchmakers imported movements from England. By 1859, however, the American Watch Company (later to be known as the American Waltham Watch Company), with Aaron Dennison (considered by many to be the Father of American Watchmaking) as technical supervisor, was producing distinctly American watches using efficient machine-based methods inspired partly by Swiss models and partly by recent innovations in American small-arms manufacture. Several more major manufacturers, such as Elgin, Adams & Perry (later Hamilton), E. Howard, the Illinois and New York companies, and Cornell in far-off San Francisco, opened factories between 1858 and 1875. By 1900 the stringent timekeeping demands of the railroads were shaping the characteristics of the American railroad watch, and the largest firms were producing hundreds of thousands of watches annually. Elgin and Waltham produced a million watches per year in their heyday!
Aaron Dennison - The Father of American Watchmaking
Early American watch design was advanced but not especially innovative; few new or unfamiliar mechanisms appeared, but American watchmakers took such things as overcoil hairsprings, compensated balances and the complete jewelling of train wheels from the realm of the exotic to the commonplace. In appearance, watches of 18 size or larger were often full-plates until after 1900, while smaller calibers adopted a compromise bar-bridge design with each bridge locating several wheels instead of only one — a pattern which became almost universal in the wrist-watch age. American watches traditionally used grade-names; in addition to or instead of the manufacturer, a watch might be marked with the name of a company director or supporter ( e.g. Waltham's ‘P. S. Bartlett’, Elgin's ‘B. W. Raymond’), a descriptive or patriotic phrase (e.g. ‘Ladies' Stem Wind’, ‘Native Son’) or the name of a historical character (e.g. New York's ‘John Hancock’, Hampden's ‘Molly Stark’). A single model might come in several different grades or levels of finish each distinguished by an individual name.

We have compiled a lengthy list of companies manufacturing watches in the US in the 19th and 20th centuries, as well as brief histories of many of the most successful and influential American watch companies. We've also included a few of the more important Swiss manufacturers. Wherever possible, we have listed serial numbers and production dates to help in establishing the approximate age of your watch. We encourage you to use these histories (select from the menu at the left) as a starting point to learn about your watch, and this rich and fascinating chapter in the industrial and technological history of the United States.

For a watch repair site, there's a lot of informational content. 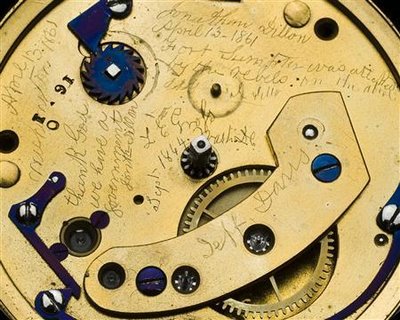 Waltham watch factory is located very close to me.

foghorn wrote:Waltham watch factory is located very close to me.

I have been by there many times. Pretty sad to see what it has become. Watch making in the states was second to none. To see it is down to just a few befuddles me.
To disarm the people is the best and most effective way to enslave them. George Mason

Deep Blue sure is gonna' be pissed they didn't make that list.

foghorn wrote:Waltham watch factory is located very close to me.

Ttt
To disarm the people is the best and most effective way to enslave them. George Mason
Post Reply
8 posts • Page 1 of 1