Alexander Historical Auctions in Maryland, a specialist in historically significant artifacts, is selling a wristwatch said to have been owned by Adolf Hitler with a pre-sale estimate of $2-4 million.

The gold Andreas Huber reversible wristwatch was likely given to Adolf Hitler himself most likely on April 20, 1933, his 44th birthday.

It was discovered by a French soldier who seized the watch as ‘spoils of war’ on Friday May 4, 1945, when his unit became the first Allied force to arrive at Hitler’s retreat at Berchtesgaden in the mountains of Bavaria.

Wait, this Frenchman just STOLE it? That’s not cricket. And they say Hitler was the monster…

And I don’t get the statement from JLC denouncing the watch. Nobody said it was a JLC. It’s an Andreas Huber. Imagine the luck of Adolph Hitler getting a monogrammed watch for free! 1933 was truly springtime in Germany for Hitler. 2M is ridiculous however. Dude was the leader of a major country, sure. But it isn’t as if he starred in The Hustler or anything.

That's a high price for a watch that runs fascist.

Cool to see it brought only half of the low estimate in keeping with waning interest in Hitler and nazi artifacts in general.
^^^Copyright

Admitted stealing it then benefits from the sale? Seems like the money should go to some Jewish Organization. Now someone has Hitlers watch for a million dollars. Who do you brag about that to?
In memory of TB/Phfluff, since he isn’t here to continue to give his praise, I will share it for him.

svaglic wrote: ↑
August 14th 2022, 5:41pm
Now someone has Hitlers watch for a million dollars. Who do you brag about that to?

I’d like to explain away the swastika. “What, this thing? It’s an ancient symbol, generally denoting fertility, or good feelings or something. Oh really? I didn’t notice, are you sure that one didn’t go the other way? Those initials? No that stands for Andreas Huber…”

I found one of these in my backyard when I was a kid: 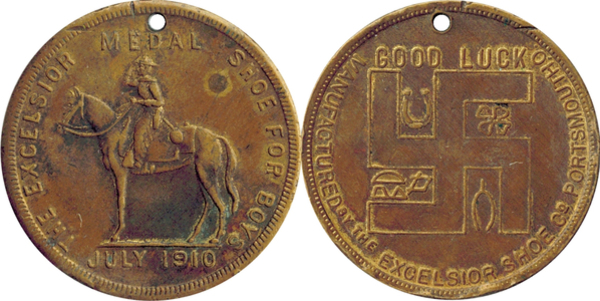 I still have it somewhere in my coin collection. I never could figure out what the symbols inside the lower left section of the swastika were. some sort of hieroglyphics?

IIRC that is Sanskrit for George Foreman grill.

Interesting. I see the Starship Enterprise.
Ardnut since 1989

I still have it somewhere in my coin collection. I never could figure out what the symbols inside the lower left section of the swastika were. some sort of hieroglyphics?

https://coinquest.com/cgi-bin/cq/coins.pl?coin=17374
To disarm the people is the best and most effective way to enslave them. George Mason
Post Reply
14 posts • Page 1 of 1