The Mickey Mouse watch has returned - and the childhood favourite will never go out of style
For almost 90 years, the rodent star of the small and big screen has kept time moving
By
Roberta Naas
12 January 2021 • 7:00am 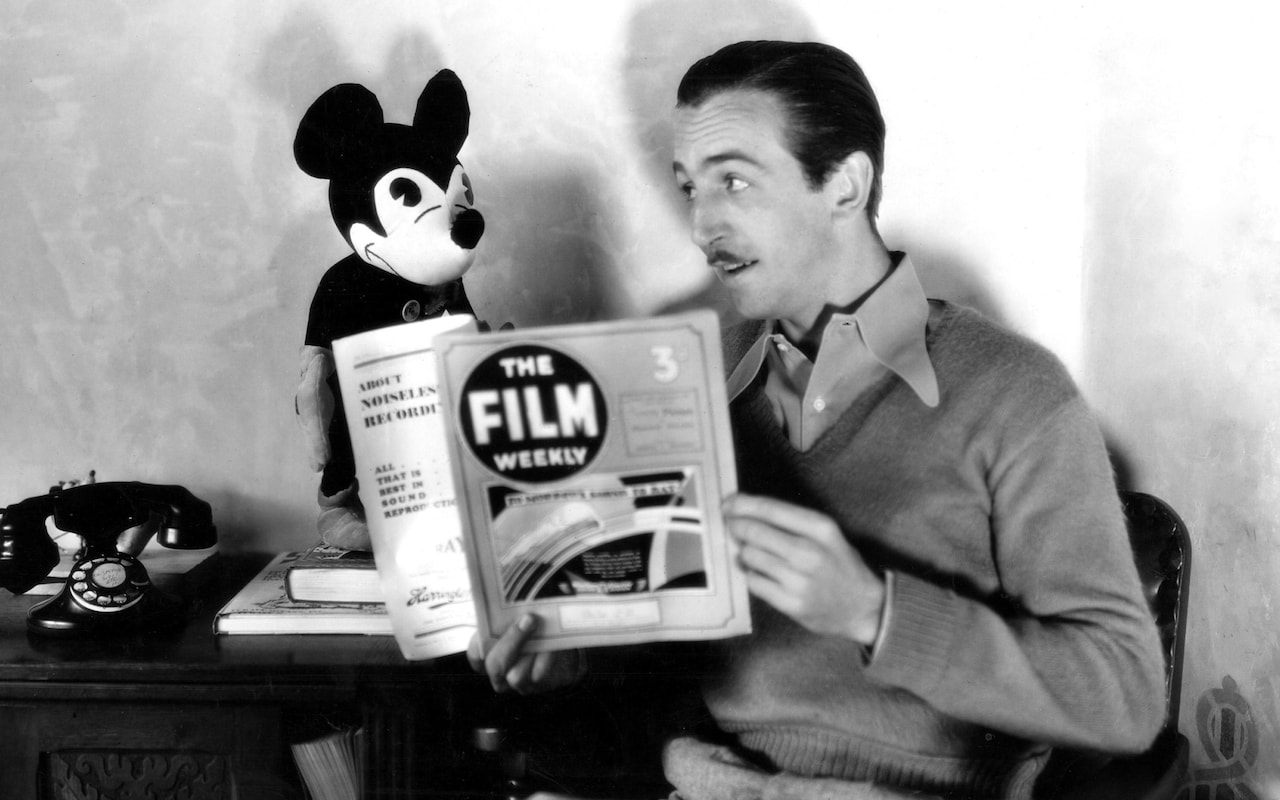 With the Disney Mickey Mouse x Keith Haring Collection, Swatch has become the latest brand to celebrate Disney’s hero character by using his image on a timepiece. And, Swatch being Swatch, it has done so with extra flair, involving dial art from the studio of the late Keith Haring.

A long-time promoter of the idea of watch dial as canvas, Swatch has collaborated with artists including Kiki Picasso and David LaChapelle and, in 2018, the brand worked with Damien Hirst on another Mickey Mouse watch, which sold out in record time.

Before his untimely death in 1990, acclaimed New York street and pop-artist Haring was a fan of Mickey (and of Swatch, too), often using stylised graphic images of the character in his art. And with these three limited-edition watches – Eclectic Mickey, Mouse Marinière and Mickey Blanc sur Noir – we are given a stunning wearable reminder of why Haring’s work, as with his chosen subject, is so enduring.

Conceived by Walt Disney in 1928, Mickey Mouse has been one of the most beloved characters in film history, amassing a devoted following that has lasted nearly a century. Attesting to that fame, the mouse with the big ears and bigger personality has graced the dial of many wristwatches.

By the mid 1920s, Disney was providing cartoon characters to Universal Studios until a professional disagreement led to him striking out on his own and establishing his studio with the help of a skeleton staff including animator and artist Ub Iwerks. Disney searched his brain for ideas for a new character that could be the mascot for his Walt Disney company; one story has it that inspiration came in the form of a real mouse that frequented his office, and even appeared on his desk from time to time.

With the help of Iwerks, Disney created an anthropomorphic rodent, who made his public appearance in one of the first synchronised-sound cartoons, Steamboat Willie – with Disney himself providing the voice-overs. 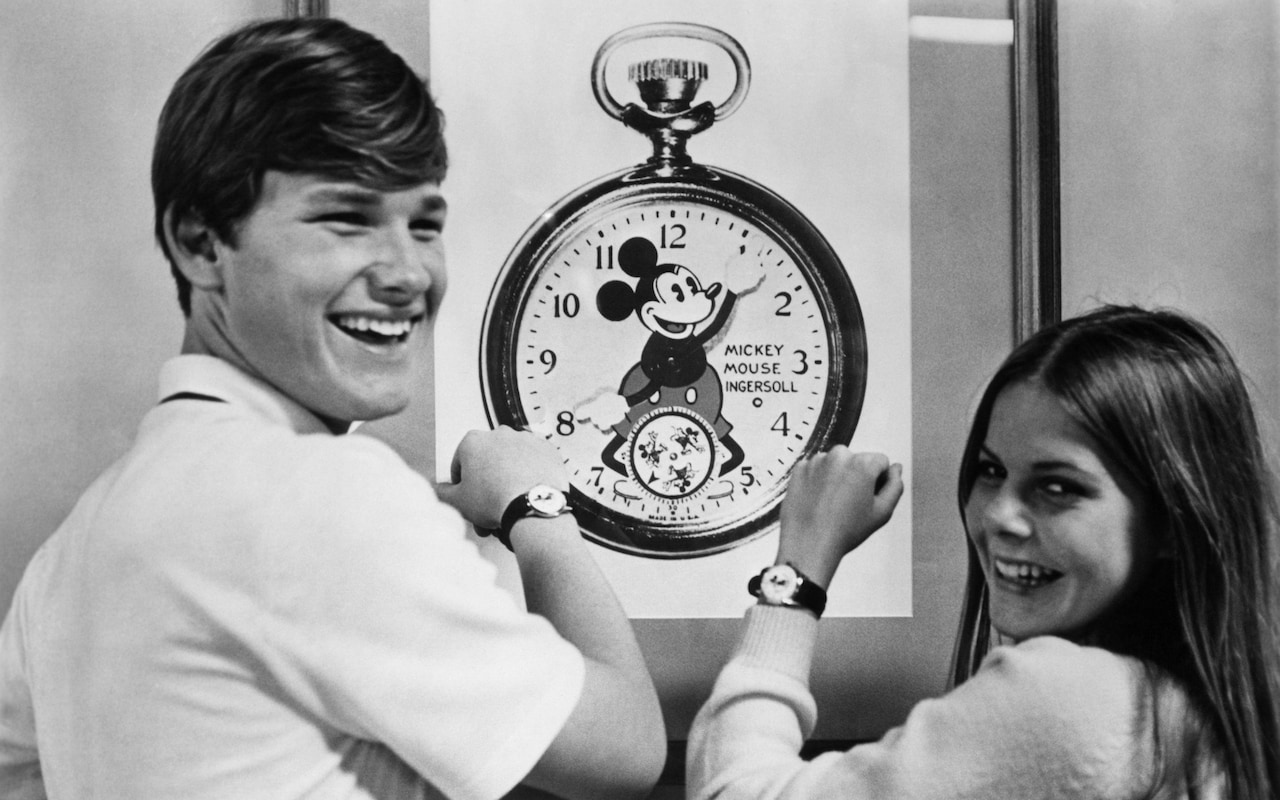 Over the decades, Mickey Mouse has appeared in cartoons, on television, in films and, of course, in theme parks globally. You’d be hard-pressed to find someone in the Western world who doesn’t know the mouse whose loyal followers come from all age groups and are eager to buy a host of paraphernalia showcasing him. Mickey has become a merchandise phenomenon.

One of the most coveted Mickey items over the decades has been the watch. In 1933, during the Depression era, when boys traded shorts for full-length pants and watches were gifted for graduation, the Ingersoll Waterbury Clock Company of Waterbury, Connecticut in America (and later Ingersoll Ltd. In London), created Mickey Mouse watches that sold for about $3 each. They featured die-cut Mickey images on chromium link bracelets. 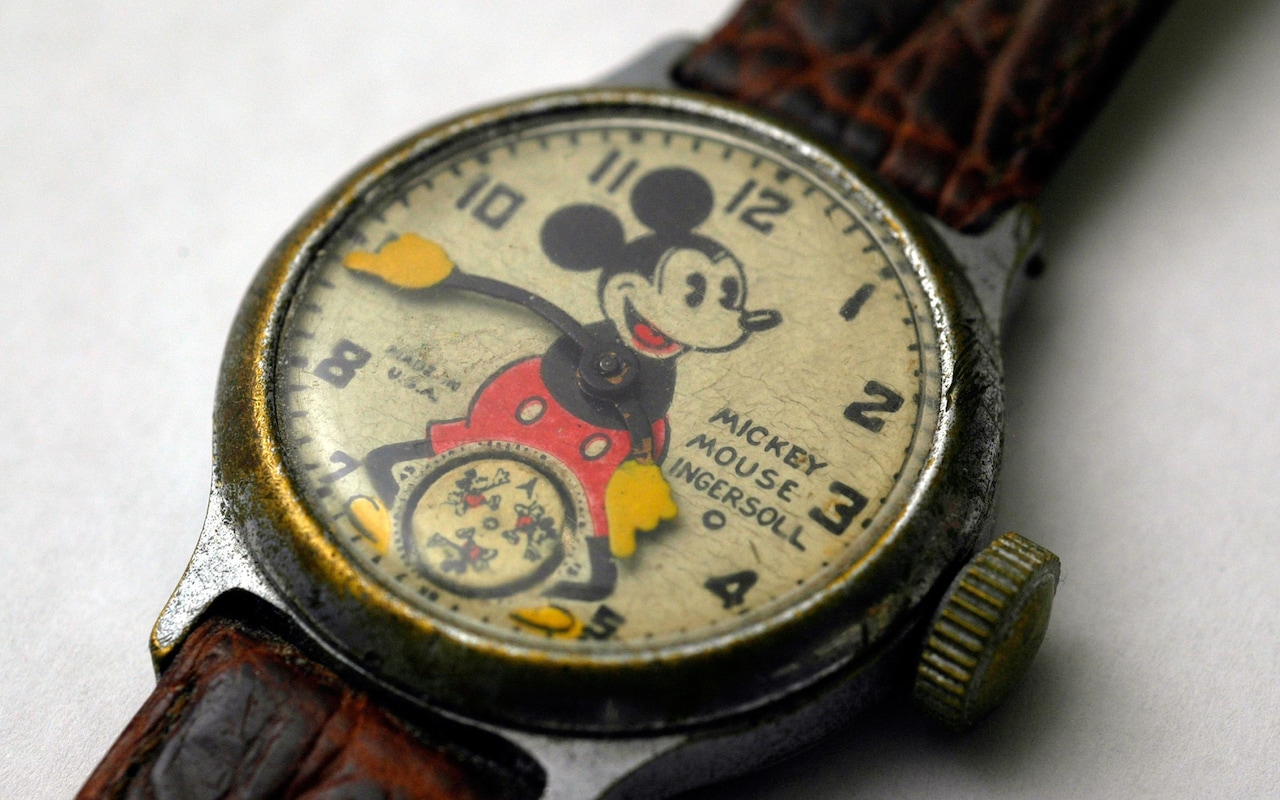 Over the ensuing decades, the licence for creating Mickey Mouse watches changed hands many times, resulting in watches that range in price from several dollars to tens of thousands of dollars. In the 1960s and 1970s, brands such as Hamilton and Elgin held licenses to create watches, most of which used Mickey’s gloved hands to indicate the hour and minutes. Beginning in the 1980s, Seiko created Mickey Mouse watches, followed in the 1990s by subsidiary brand Lorus, who sold Mickey timepieces for less than $100.

Also, in the 1980s, watchmaking legend Gérald Genta (who is credited with designing the famed Audemars Piguet Royal Oak and Patek Philippe Nautilus, among others) was creating Mickey Mouse watches as part of his Fantasy collection. More complex and elaborate than other watches on the market, Genta offered jumping hour indications and retrograde minute hands that would indicate the minutes from 0 to 60, and then fly back to zero to start the count again at the end of the hour. 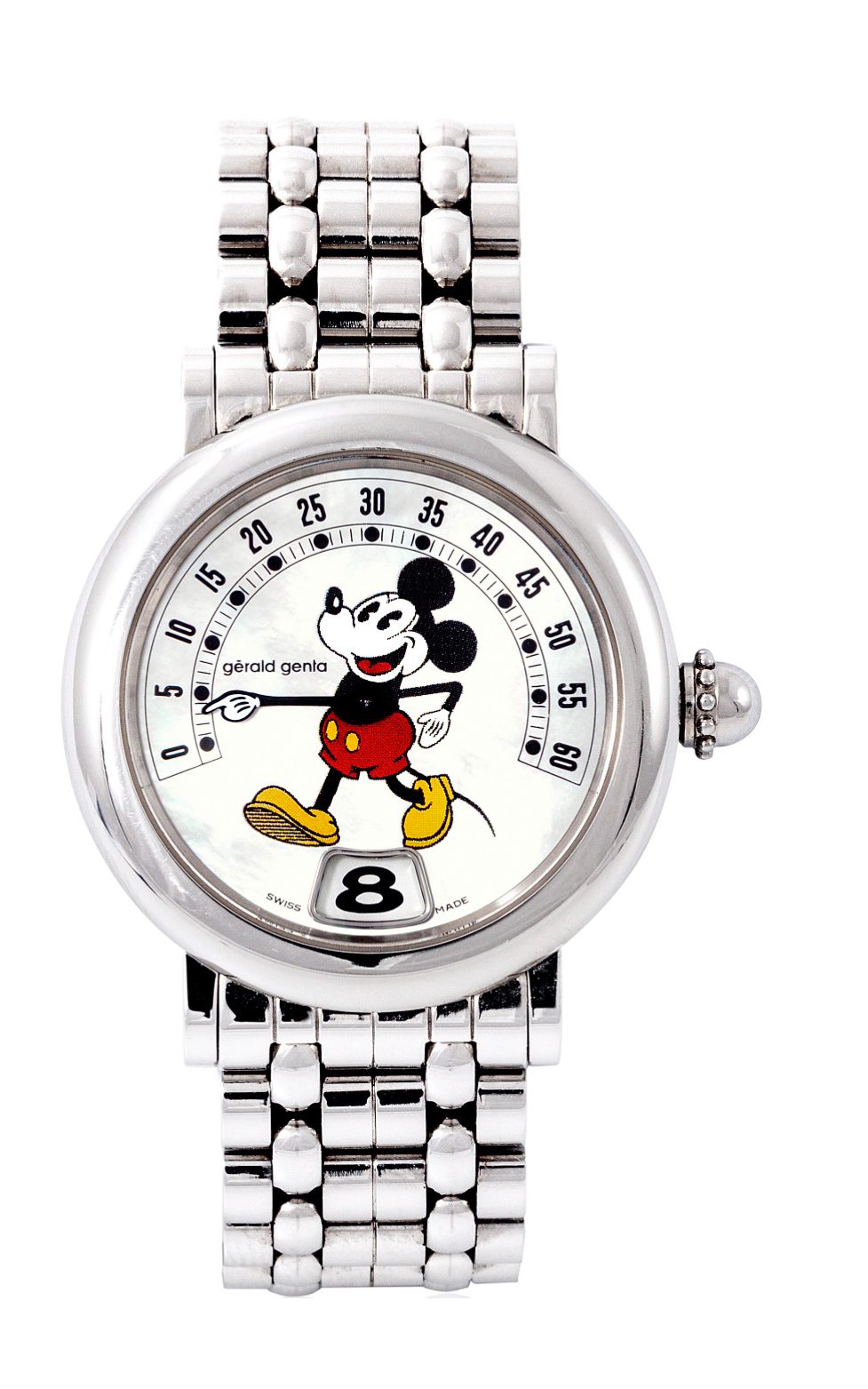 
Genta would sit with press and retailers at the Basel watch fairs in the 1980s and gleefully show these wonderful pieces with enthusiasm and excitement – much like a child at Walt Disney World. He often bedecked his Disney watches with diamonds for added effect. Costing thousands of pounds at their launch, the popularity of these watches is again growing, with auction prices on the rise.

A host of other watches exist that, although not legally licensed, showcase Mickey in all his glory. Some were even created in after-market situations, including a few Rolex Oyster watches that have appeared on the second-hand circuit with after-market Mickey Mouse dials. 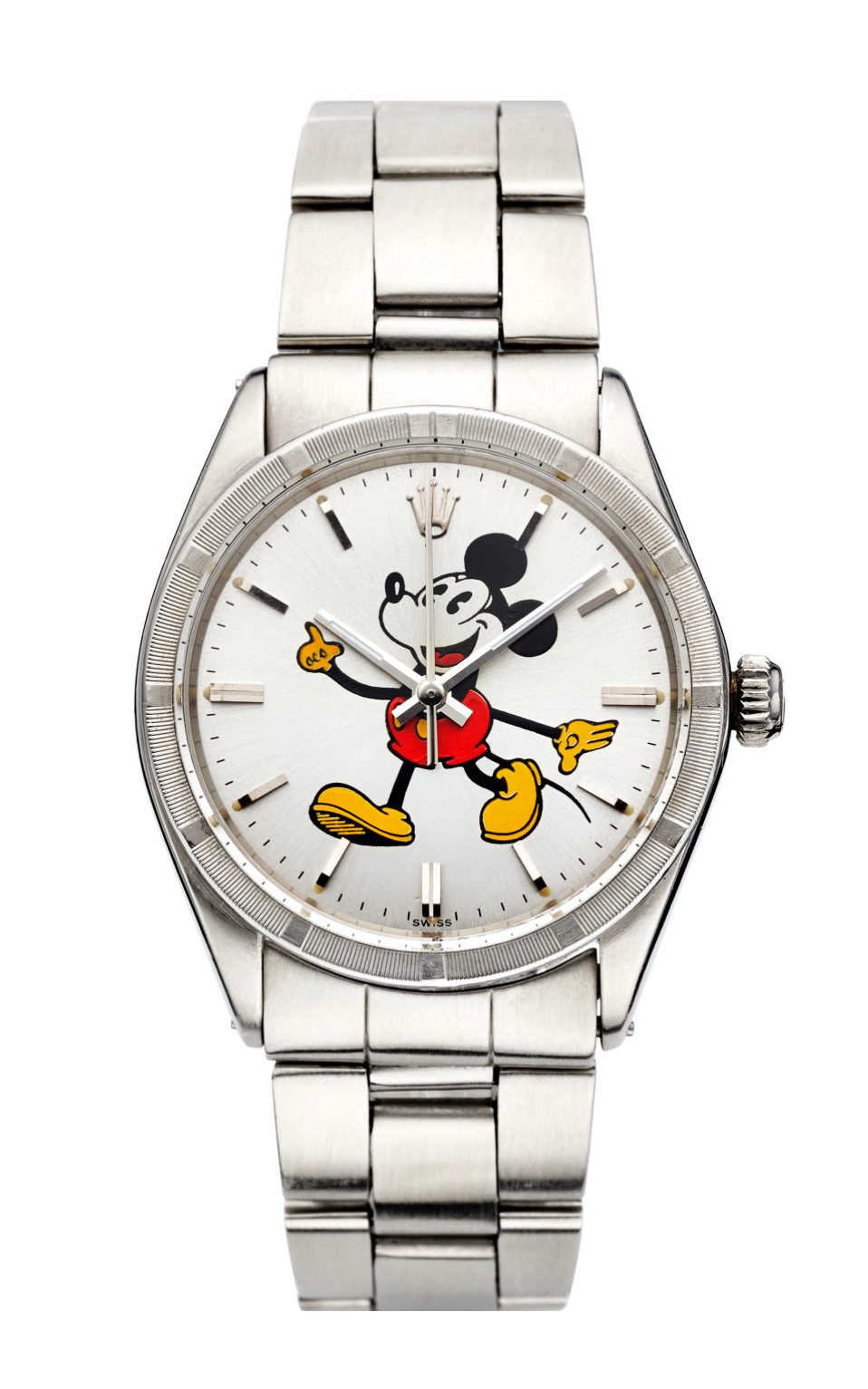 
Of late, though, just a few brands have the rights to use Mickey Mouse on their watches. The recent Swatch X Damien Hirst colourful plastic watch with Mickey-decorated plastic straps sold out in less than a day. Today they can be found on resale sites for upwards of £1,000.

In 2020, coinciding with the Chinese Year of the Rat, Gucci unveiled two Grip Mickey Mouse watches – a 35mm yellow-gold PVD version and a 38mm steel model. The vintage-inspired cushion-shaped case with jump hours and minutes displayed via arc-shaped apertures at 12 o’clock, featured a relaxed Mickey lying on his stomach with his head on his white-gloved hand enjoying a moment of time. In a playful design nod, his eyes were coated with Super-LumiNova to glow in the dark.


Citizen, which has a 12-year partnership with Disney as the Official Timepiece of Walt Disney World Resorts and Disneyland, has also unveiled a range of Mickey watches. Powered by the brand’s Eco-Drive technology (meaning they run on light and do not need a battery), the watches range in price from £179 to £349 and feature discreet Mickey Mouse heads and hands placed around the dial for subtle effect, or full-on double Mickey heads for a more whimsical appeal.


Interestingly, the copyright on Mickey Mouse is slated to run out at the end of 2023. But until then, the fact that brands are happy to pay a license fee to create these pop-culture watches underscores the fact that Mickeymania will most likely live forever.

I'm seeing Disney characters on even nebulous watch brands now. I get the feeling you'll be seeing Pluto on Port-O-Lets any day now.

Love Mickey and watches. I'll probably do a datejust Mickey one day.

The one thing I missed in the last year is Disneyland. I like to go at least twice a year for a week. Sucks....

Have never been a fan of Disney parks and icons. Just not my thing. Went to Disneyland as a kid. Preferred Six-Flags.
My best friend from college shared his secret to his huge financial success, "I fell out of the right vagina."

Walt Disney gave up friends in front of HUAC.

What the fuck, no love for the mighty Invicta Watch Group ???? 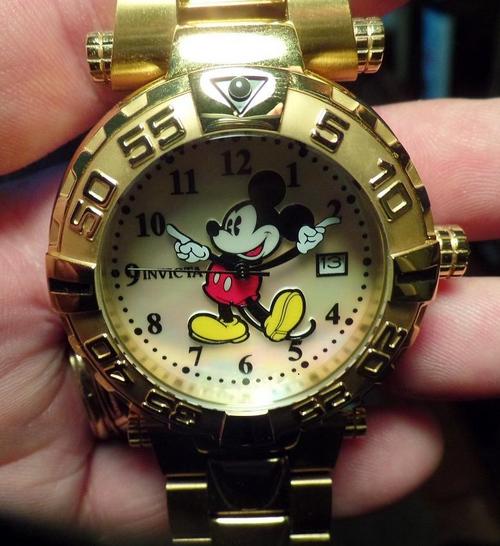 No Mickey Mouse watch love here. Except, maybe, for a 10 year old.

Same applies to that Rolex, which would be nice, if not for the Mickey redial. These fucking travesties are out there by the ton - ganja leaf redials, Mickey redials...
I always hope for the best. Experience, unfortunately, has taught me to expect the worst.
Elim Garak, Star Trek: Deep Space Nine

Same applies to that Rolex, which would be nice, if not for the Mickey redial. These fucking travesties are out there by the ton - ganja leaf redials, Mickey redials...

I don't bash anybody for wearin' 'em, but not my cup of tea, either.

FUCK ALL YOU MOTHERFUCKERS!


just kidding, y'all don't have to go fuck yourselves. i really don't care what y'all think that much :). i enjoy mine, it reminds me of my childhood and a watch my mom bought me when I was young, it was more of a tinker toy with mickey on it, but it sure was enjoyable. 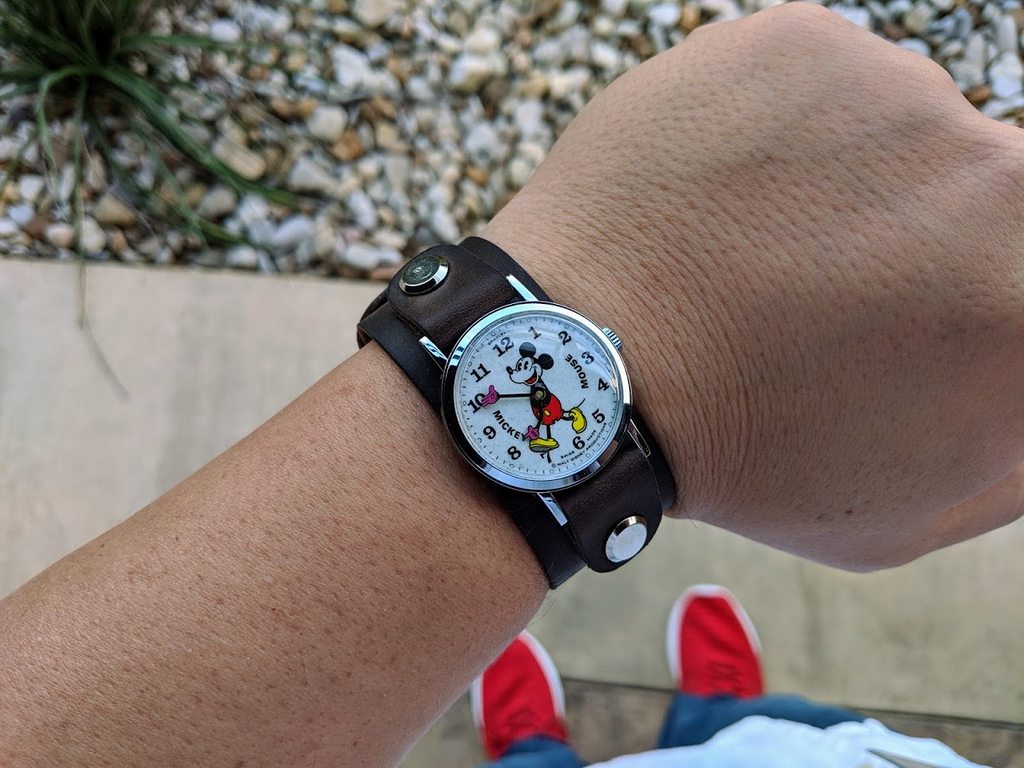 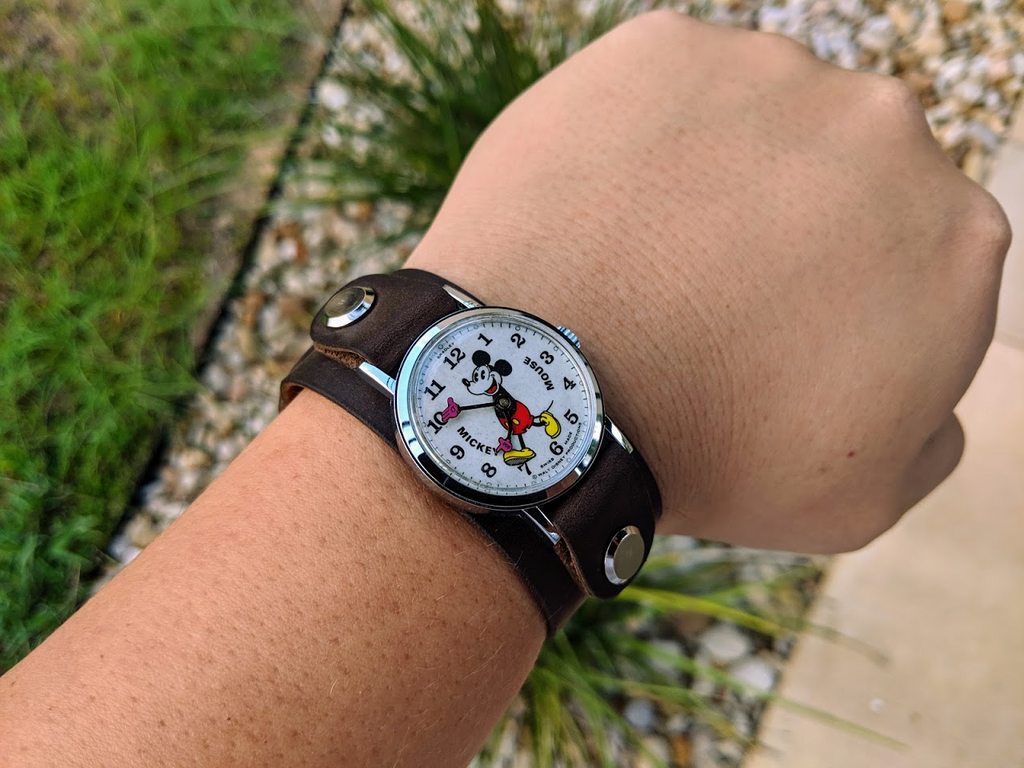 iwasbanned, the Mickey Mouse watch is iconic! No need to feel defensive about it.

While I'm not into the mouse, I do have my Snoopy watch:

And the Peanuts gang isn't going anywhere as far as watches are concerned.

Anyone interested in seeing photos of my "The Simpsons" watches my mother bought me from Burger King?

bbattle wrote: ↑
January 25th 2021, 4:28pm
iwasbanned, the Mickey Mouse watch is iconic! No need to feel defensive about it.


I was kidding sir

I have a thick skin.