The Truth About The Tockr Brand

I do not know for sure how to start or even write what I have on my mind regarding the one particular watch.

Well, two watches, to be exact, but my first intention was to buy watch for my brother in law, who is long time pilot, for his birthday.

So, I didn’t want to buy just any pilot style watch, like most of people will do. Nope, I want something different and because his connections to US Air Companies I thought it will be nice to purchase a watch from US Texas based company Tockr and was not sure which one from these two models in C-47 series; Radial or Radial Wing, And there where my confuse started. I always do my research regarding buying watches, because myself is some kind of collector and watch enthusiast with limited knowledge and I like to learn, so I check a more than few web sites with reviews and descriptions about this two watches.

so there are no lack of articles about C-47 series of watches from Tockr. There are even bold statements that these watches (dial and case) are produced by Swiss company TEC Ebauches SA
Website Screen Shots 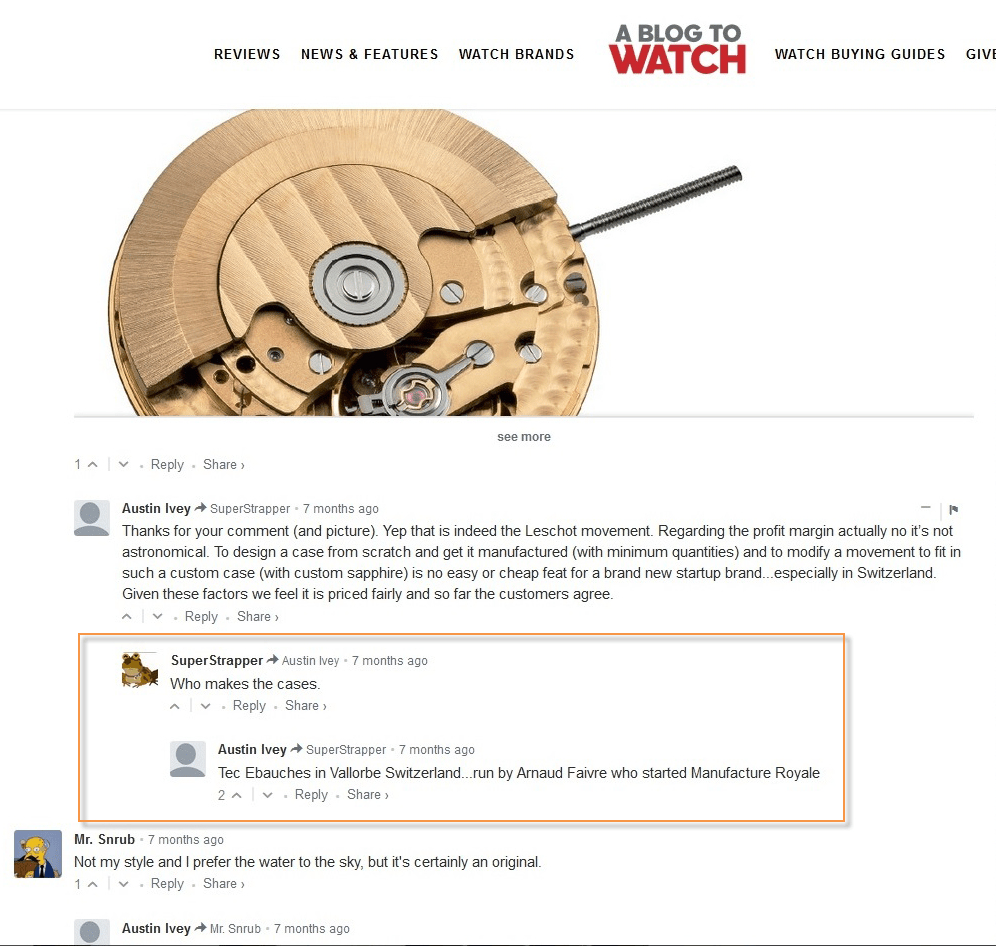 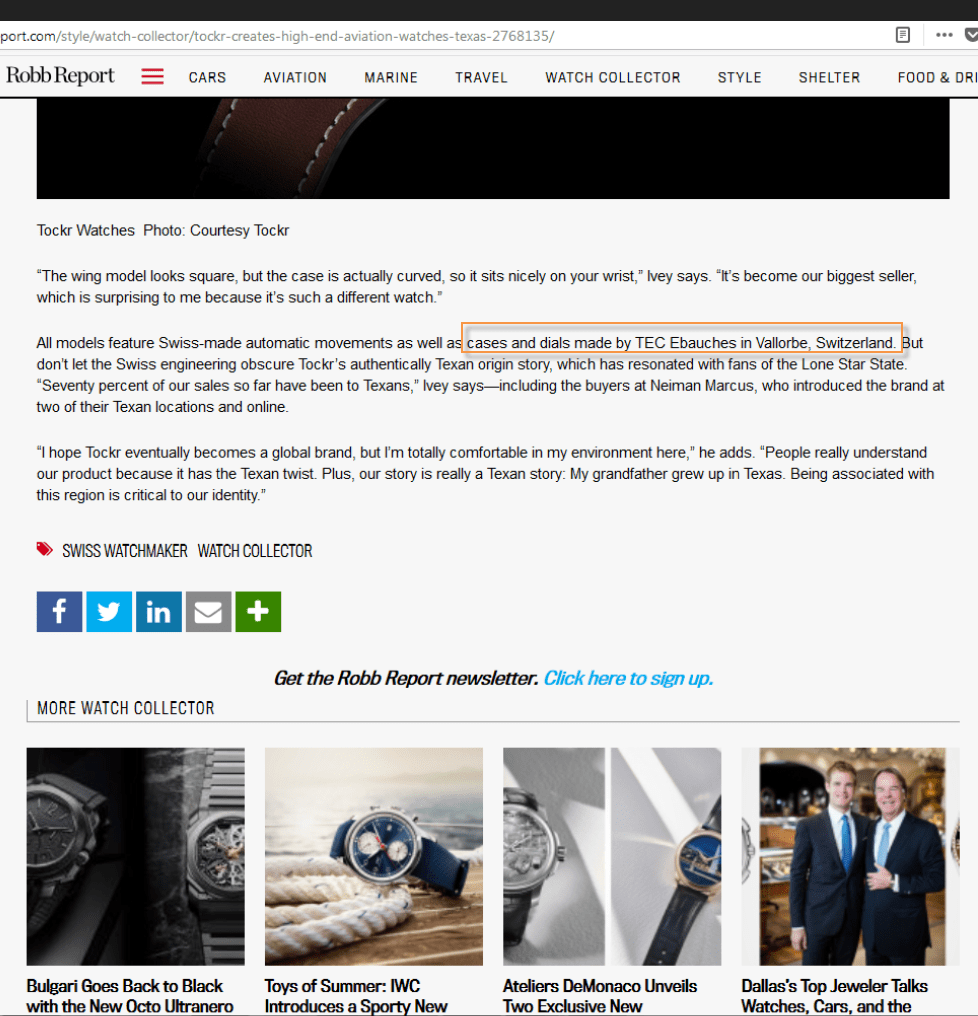 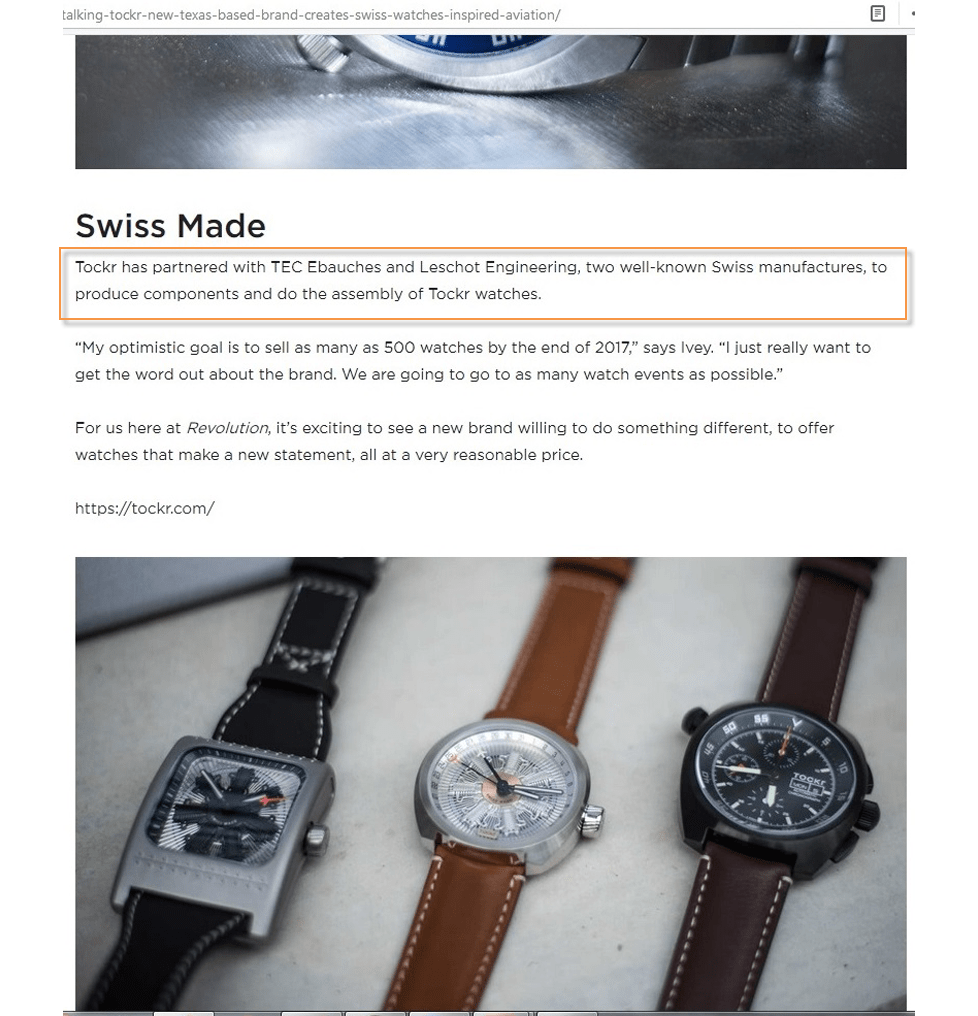 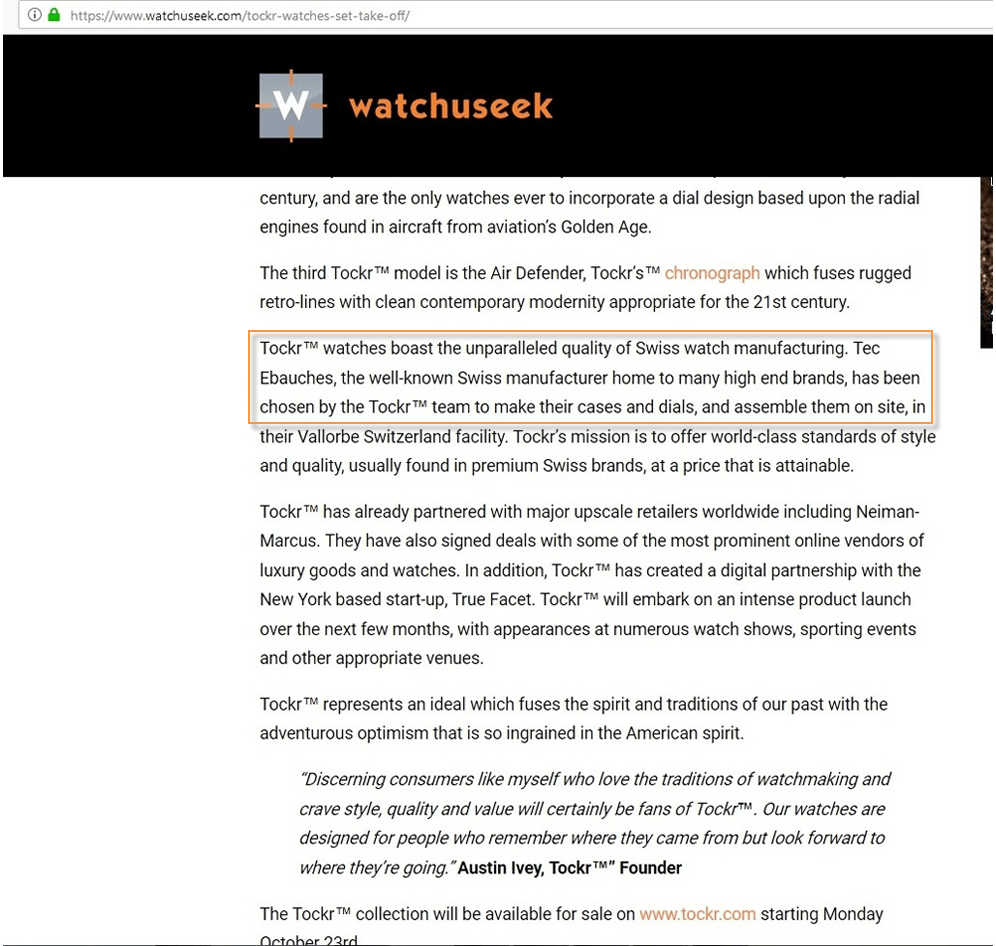 …and most of us know about Arnaud Faivre, who is running ETC Ebauches SA at the moment (For those who does not know that name here is a few links:

After all of that, I thought, YUP, that is a perfect gift watch. So I wanted to check movement as final research, regarding my purchase and I find that is made by Swiss company, Leschot SA Enginering which is absolutely respectable company and was just confirmation of “Swiss Made” inscription on dial.

Ok, all elements are there and finally now I only needed to chose between “Radial” and “Radial Wing” model from Tockr C-47 series and I check for as many pictures and links as I could in one afternoon. I usually use for that kind of research “reverse image search” because is easier to find similar pics. But, strange enough, when I was talking to my sister over the phone about watch, she was by mistake typed www.tockr.co in her browser and was redirected to site of http://signstimemovements.com/shop/

(which I didn’t know then) and she ask me about some “Amir” watch she liked on website. What “Amir” watch, was a question in my head at that moment, but then we start talking about “round” or “square” (my sister is not in the watches, so I was keeping things simple .) and then she asked me about some “Stovard” watch… ok… now something was wrong. There are no “Amir” watch or “Stovard” watch on tockr.com website so I asked her to send me a link…BOOOM… and there is a same looking watch… NO, TWO same looking watches as C-47 series from Tockr, but this two was branded as “BOLT” and price was WOW significantly smaller than from Tockr. So, what else to do but spent more hours (even days) in new diligence research about BOLT watches (http://signstimemovements.com/shop/) and there are some very interesting info.

First, there is a note under description of both Bolt watches (Razorback & Airfoil) which say: “Note: These models are not hommage or Fake Tockr watches. Made of original overstock parts with original movements.”

Second, they have own movement laboratory/factory in La-Chaux-de-Fonds which is very interesting, because Leschot SA have their movement production in same Swiss city and as the used movement, they are both using same Cal.726A8 or Cal.726/A11.

That was a key for my inner explorer to woke up in full and find more facts, real facts and I started sending emails to all of them, questioning origins of C-47 watches.

I could now write all steps and emails I wrote and how did NOT receive any official answer from Tockr or TEC Ebauches SA, but did receive few very interesting info and leads for deeper investigation from Leschot SA and SignsTimeMovements, so I will write just my findings here in short and ask you, yes you, to check and ask and send emails as I did to find the truth behind this two watches.

First of all, these watches have nothing to do with “Swiss Made” and that is not a bad thing but it is just a lie.
Second, TEC Ebauches SA and Arnaud Faivre have nothing with producing a case for these two watches because they just produce “radial engine” dial for SignsTimeMovements, so that is a lie too.
Third, both “brands” are using same, identical movements from Leschot SA Enginering, Cal.726/A08 (three hander) or Cal.726/A11 (three hander with point date complication).
Fourth, SignsTimeMovements have direct connection (cooperation) with Leschot SA Enginering and Tockr does not.
Fifth, but not last, Tockr ordered this two watches (not only this two!) from SignsTimeMovements who designed and manufactured them from scratch, including case, handset and they modified Leschot Cal.726 with different hand height because dial high radial engine design and put them together in ordered amount but there was a kind of conflict, so they are still in ownership of http://signstimemovements.com/ At least, I see that like that.

But I was proven so many times to be wrong, so I am asking you, all watch enthusiast to help and check all this info, because something is really smelly in this story.

In the end, I will buy watch from http://signstimemovements.com/ because it is actually “first original” watch and if anything goes wrong, they are the guys who actually made and put together (assemble) this watch; case and hands in Asian factories, dial in Switzerland and with almost “in house” Swiss movement, so who is more legible to fix any eventual problem or do regular maintenance of the movement.?

You can check all my writings very easy and with few emails, asking for official reply from Tockr, TEC Ebauches SA, Leschot SA Enginering and SignsTimeMovements.
Truth about tocker watches.pdf 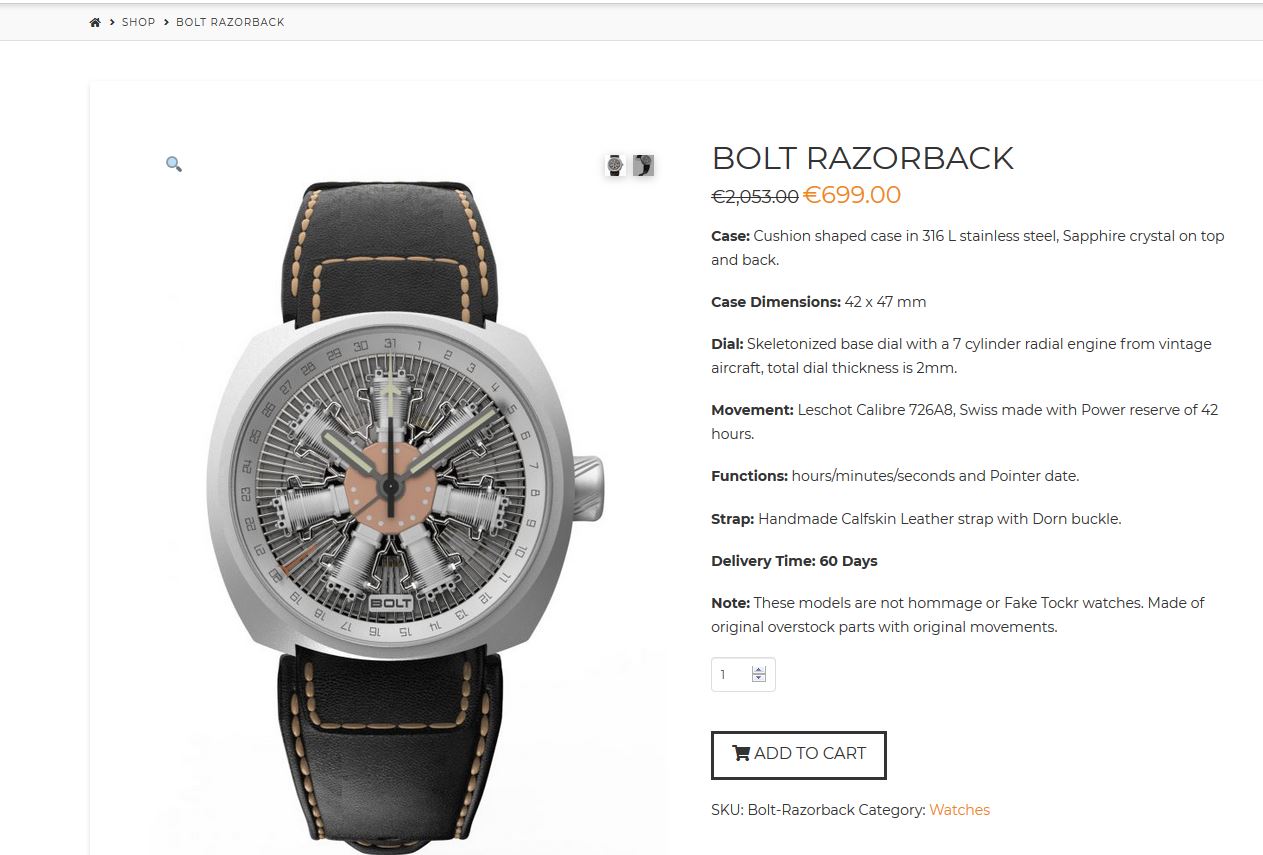 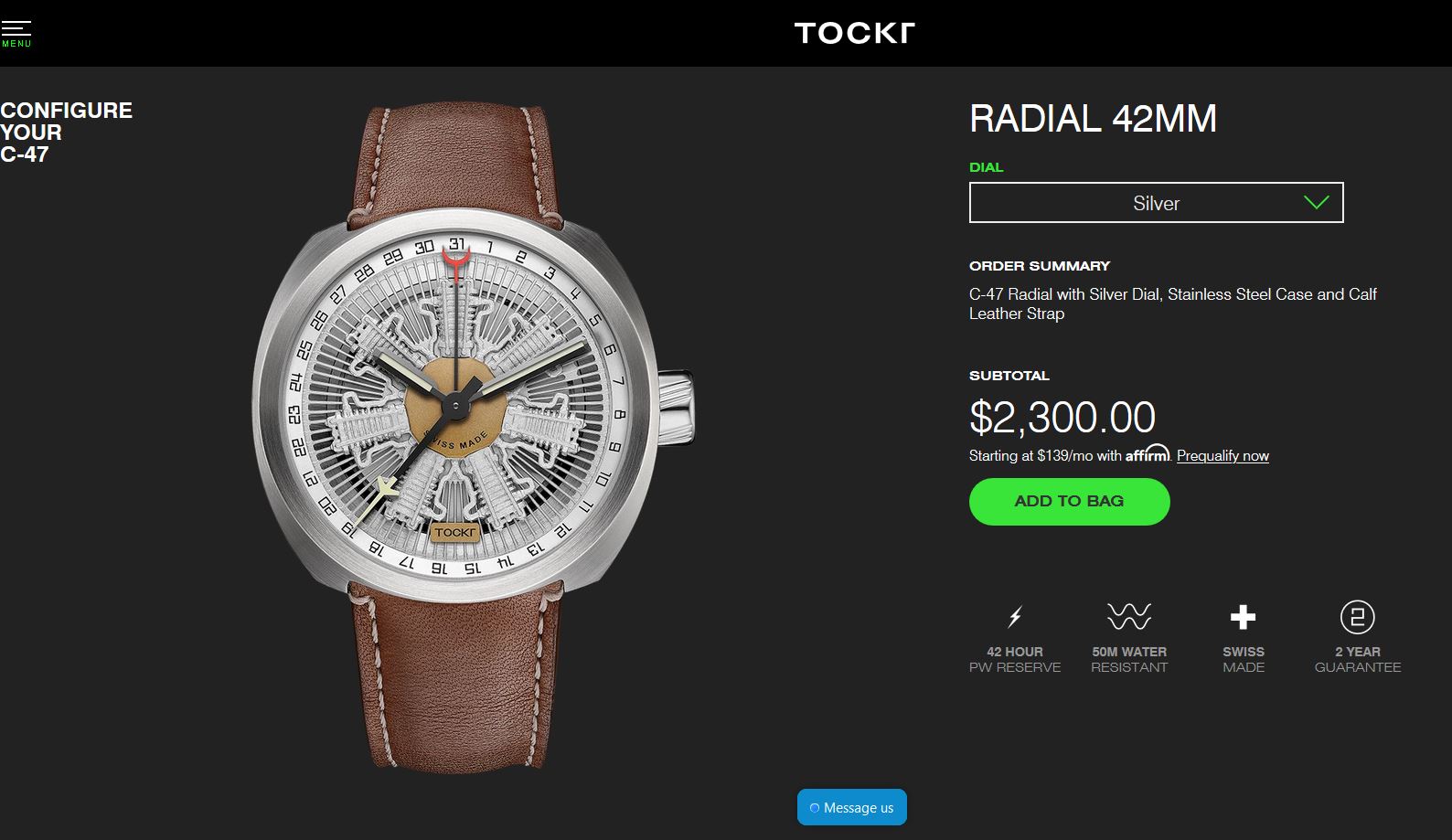 http://signstimemovements.com/product/bolt-airfoil/
You do not have the required permissions to view the files attached to this post.

First of all, these watches have nothing to do with “Swiss Made” and that is not a bad thing but it is just a lie.

Nahh, it's a bad thing. Those who resort to this kind of guff are as bad as the TV hucksters. Away w' ya.
The Best Invicta Ever is: The ones you used to own. - Boscoe

Could somebody provide the Cliff's Notes version of what's going on here??

Ok, let me just say that if anyone ever bought me one of those watches, I would be horrified.
I don’t think I could keep a straight face, thank them and ever wear it.
Dude thinks he got a deal, €699.00 rather than $2,300.00....... he didn’t.
If you or someone you know has been butt hurt over the lies Watchlords has exposed, you may be entitled to compensation. Please call 1-888-who-gives-a-fu** operators are standing by.

That radical radial dial looks like something Inflicta would proudly trot out.

And then there is this one -

bolt airfoil.JPG
http://signstimemovements.com/shop/
You do not have the required permissions to view the files attached to this post.

The story line or "heritage" behind the brand origin is a cool nod to the owners grandfather if true.

Other than that the watch is too steampunk for my taste.

labman wrote: ↑
January 9th 2020, 11:21am
The story line or "heritage" behind the brand origin is a cool nod to the owners grandfather if true.

Other than that the watch is too steampunk for my taste.

The original story they gave out was bullshit and I called them on it. Next thing I knew there were posts calling me a hater so I just outed the lies in public on FB. All of a sudden they were making nice. Read the PDF.

Hi Alain how are you?

In case you didn't know I am involved with the new microbrand Tockr.
Austin who is the founder of the brand has reached out to you after your comment on our page (which by the way was unnecessarily rude and nasty).

I wanted to let you know about his message as you are not connected to him so you can check it out and see that there is no "bullshit" about the history of his family.

I hope it will be enough to clarify things and that in the future I can count on you to be a lover rather than a hater.

Tockr messager.pdf
You do not have the required permissions to view the files attached to this post.

Your usual in depth detective work!

Anything can be put on a grave stone.

If I weren't going to be cremated, hopefully after my death, I would put on my headstone "Nicest Guy in the World".

I have a feeling others would want " He was an Asshole"

These wartchs look like fucking shit. I could care less what the fucking backstory is.

The company Signstimesmovements is no longer viable or so it seems as the domain name is for sale. I wonder how long it will be before tocker goes bust? 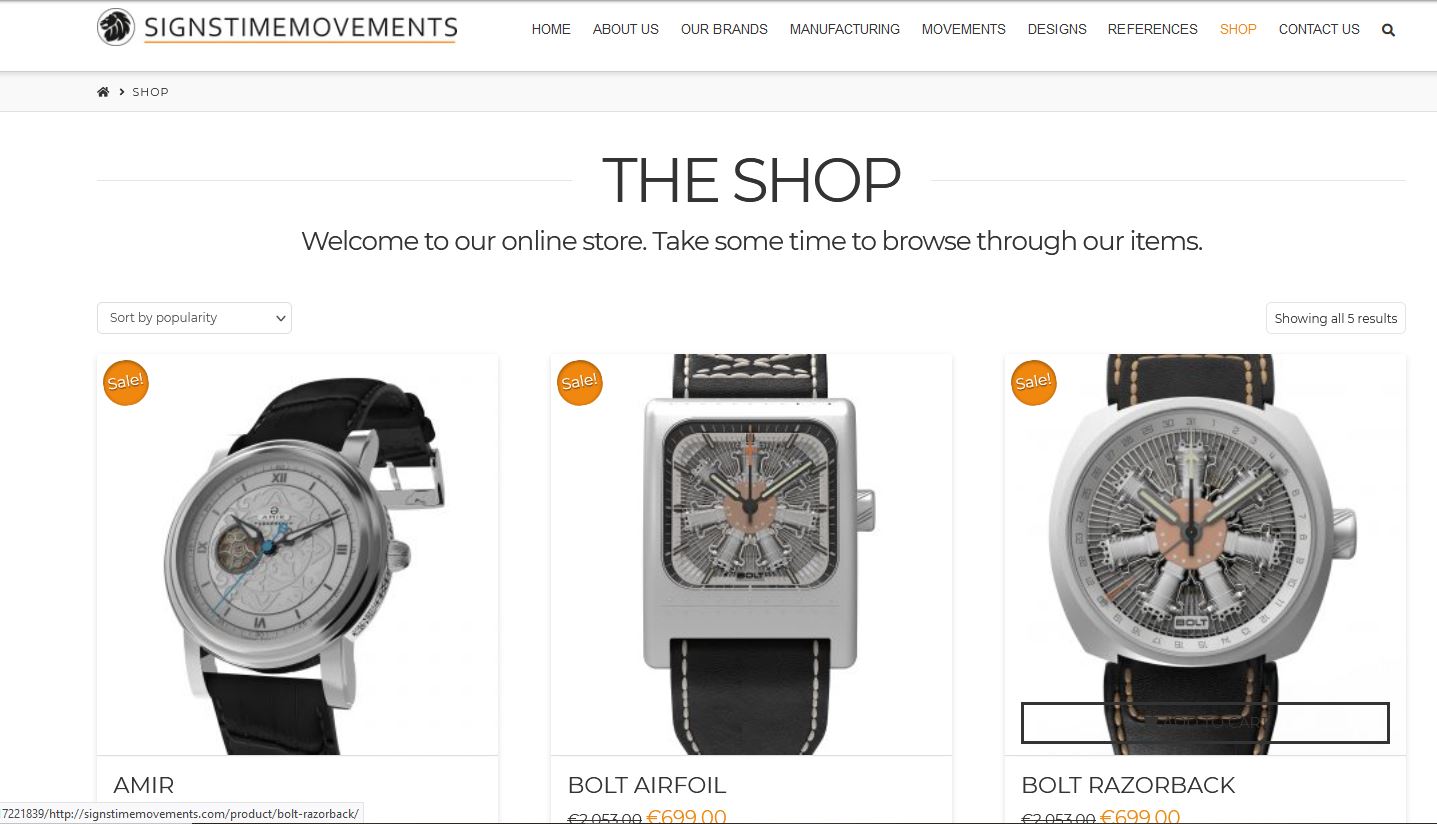 I wonder how they have been peddling this crap for so long.

Fools and their money and sew fourth.
^^^Copyright

I don't mind the Airfoil. But then I like Azimuth. And I'm a bogan.
Copyright Reclinervision 2020 Productions. All rights reserved.

So hrd to choose amng tockr boldr and mvmnt

My eyes hurt. My funny bone is tickled, however, realizing someone out there actually laid out 700 smackers for watches that look like a Technicolor yawn.
The Best Invicta Ever is: The ones you used to own. - Boscoe

What happened here? Being from Central Texas I was curious on Tockr and seen them in person. I have no side here but I have never heard of BOLT watches, and the site seemed to have only 3d renders and not actual watches. Plenty of bs out there it seems though not only with micros, mushrooms, but even "name brand" watches it seems. Tockrs seem cool but way overpriced, id like the 7750 model for around/under $700 though that seems like a good price.
Post Reply
18 posts • Page 1 of 1